It’s certainly one way to get lost in space.

Astronomical photographer Ben Bush and his dog Floyd are pictured in front of a dazzling array of stars and planets including Mars and Saturn.

Mr Bush, 40, was out walking four-year-old border collie Floyd when he decided to experiment with his camera.

After setting it up on a tripod with a time delay and changing the shutter speed, he walked Floyd over to a knoll where they posed for the photo.

Ben Bush and his dog Floyd are pictured in front of a dazzling array of stars and planets near Hadrian’s Wall in Hexham, Northumberland. He has won the ‘people and space’ category in the Royal Observatory’s 2019 Astronomy Photographer of the Year competition

When he checked the picture Mr Bush found he had managed to frame Mars and Saturn – as well as the Milky Way’s galactic core.

His photo taken at night near Hadrian’s Wall in Hexham, Northumberland, has now won the ‘people and space’ category in the Royal Observatory’s 2019 Astronomy Photographer of the Year competition.

Mr Bush, of Keswick, Cumbria, who gave up his job as a tree surgeon to work full-time as a star photographer, said he had slowed the shutter speed to ten seconds and the frame was repeated 30 times to capture a clear silhouette of the pair. This photographer looks like he is about to be sucked into a cosmic plughole in Tasmania, Australia. Of course, this image is in fact a stacked star trail, combined to show an hour and a quarter of the Earth’s rotation through space and time

He added: ‘I often take my dogs out walking at night and I started capturing the planets and stars while I was out.

‘It was a bit of luck we got the photo as the clouds had rolled in when I saw an opportunity to take a picture with the dog.

‘I thought it would be a nice shot so long as Floyd sat still for long enough.

‘The hardest part was getting Floyd to stay still. I whispered “Don’t move! Don’t move!” the entire time the photo was being taken. I managed to get Mars on the left-hand side of myself and Saturn to the right of Floyd.

Over us is the galactic core of the Milky Way, which is 26,000 light years away. It’s pretty amazing, really.’

He added: ‘I often get my photos from just playing around and seeing what I can get.’

The competition category winners – along with runners-up and highly commended entries – will be showcased at the National Maritime Museum in Greenwich, London, as part of the Astronomy Photographer of the Year exhibition which is open to the public from today.

The competition received a record 4,600 entries from 90 countries. Laszlo Francsics, from Hungary, won the £10,000 photographer of the year prize. 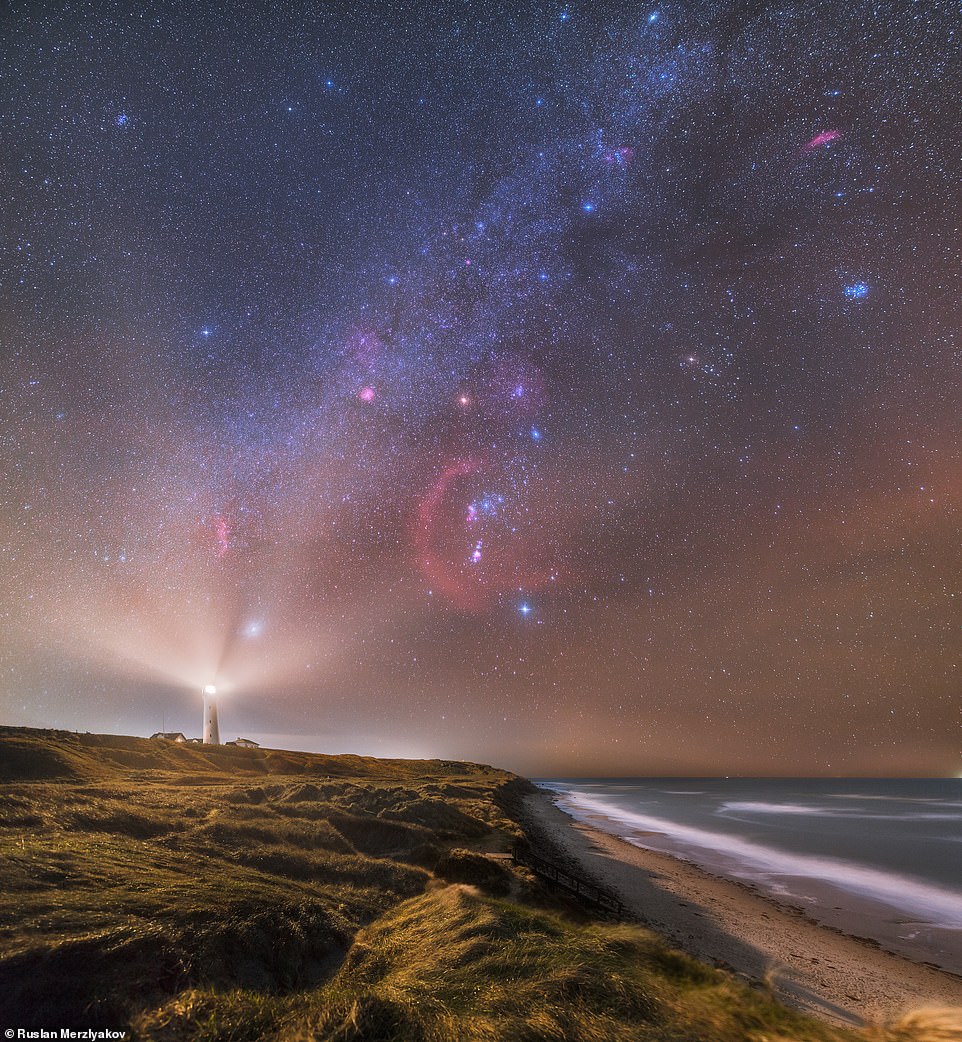 This photo shows Orion setting over Hirtshals Lighthouse in northern Denmark. The photographer went out after it rained to take this shot of the night sky 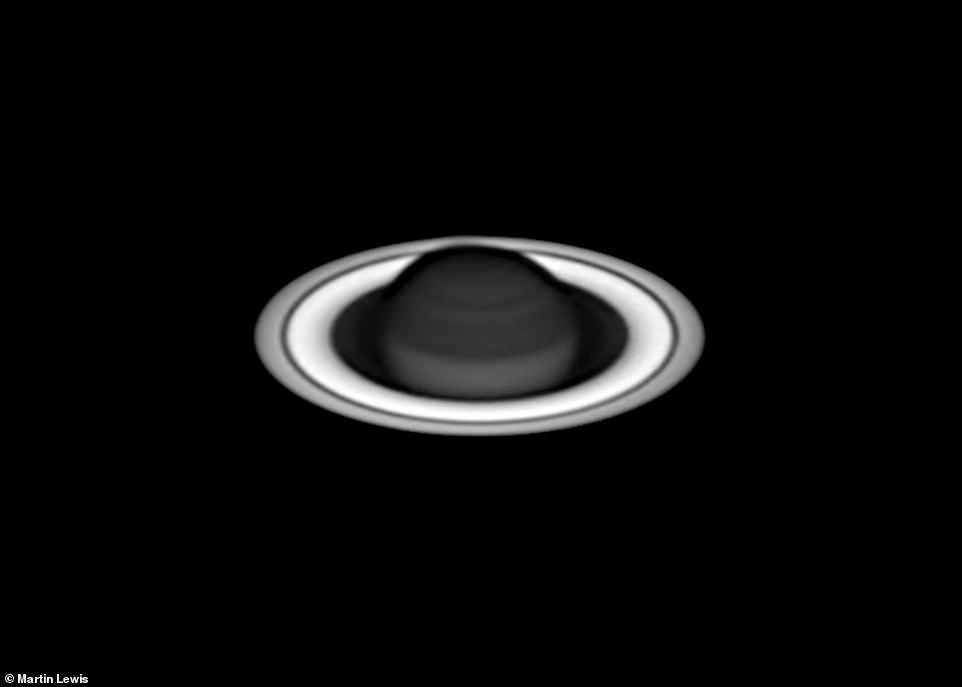 This image of ‘black Saturn’ was taken by Martin Lewis in St Albans, Hertfordshire last month. The image was taken on a warm and steady night in August using a methane band filter to reveal, as dark bands, the high concentrations of this gas in Saturn’s atmosphere 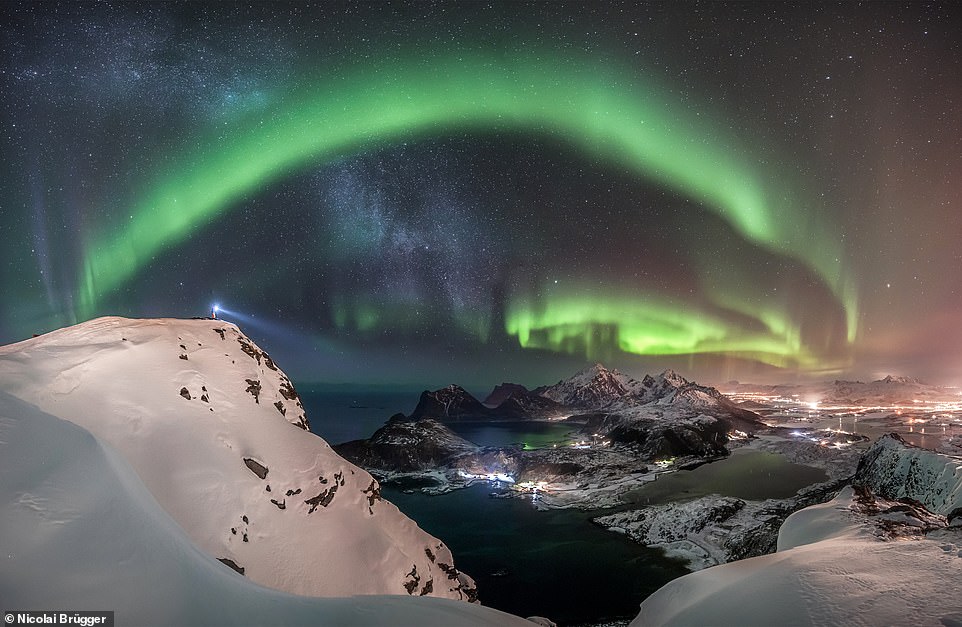 The photographer hiked in the snow to the top of the mountain Offersøykammen in Norway to capture the breathtaking giant aurora over the Lofoten Islands. He waited hours, and it was only after midnight that the bright Northern Lights finally appeared 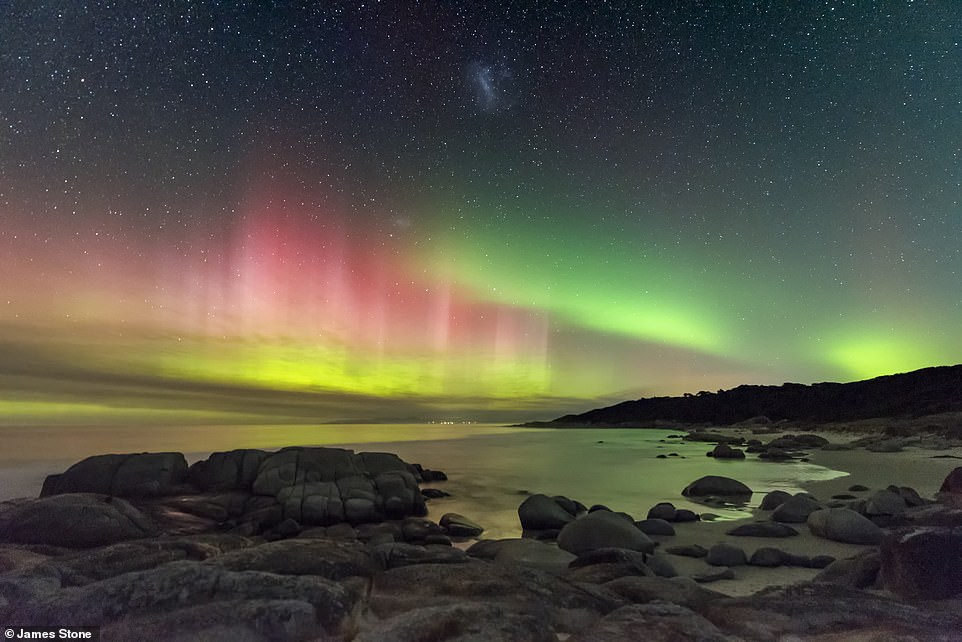 This photo shows the Southern Lights beaming high into the night sky on the east coast of Tasmania, Australia. A large magellanic cloud has also been captured at the top centre of the image 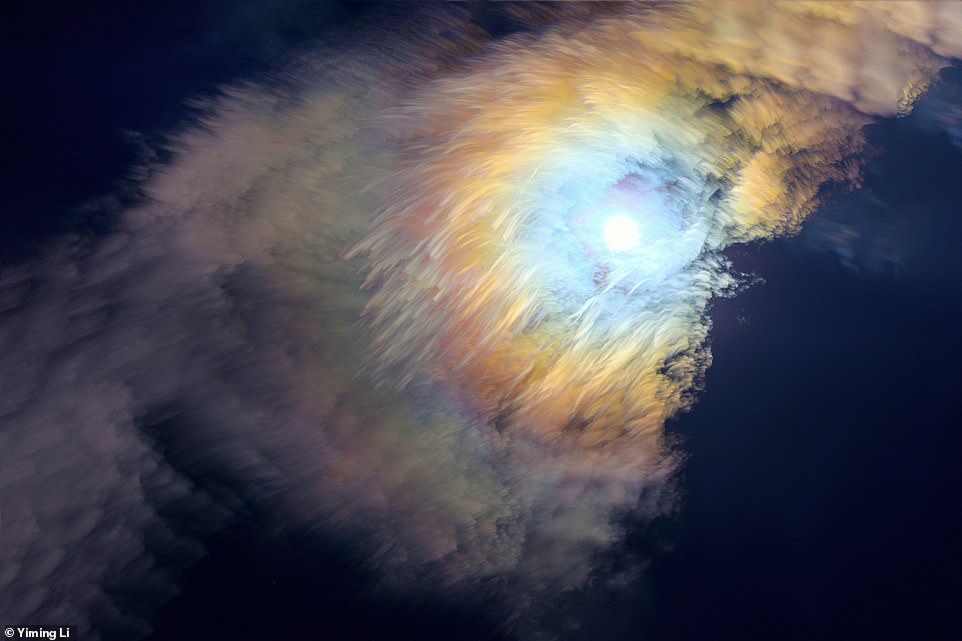 This photographer in China used dozens of pictures together to build one picture of the ‘corona’ around the moon, which is the rings of light which can be seen around the moon and sun. The photographer used several images to build what looks like a seven colour feather growing out of the moon 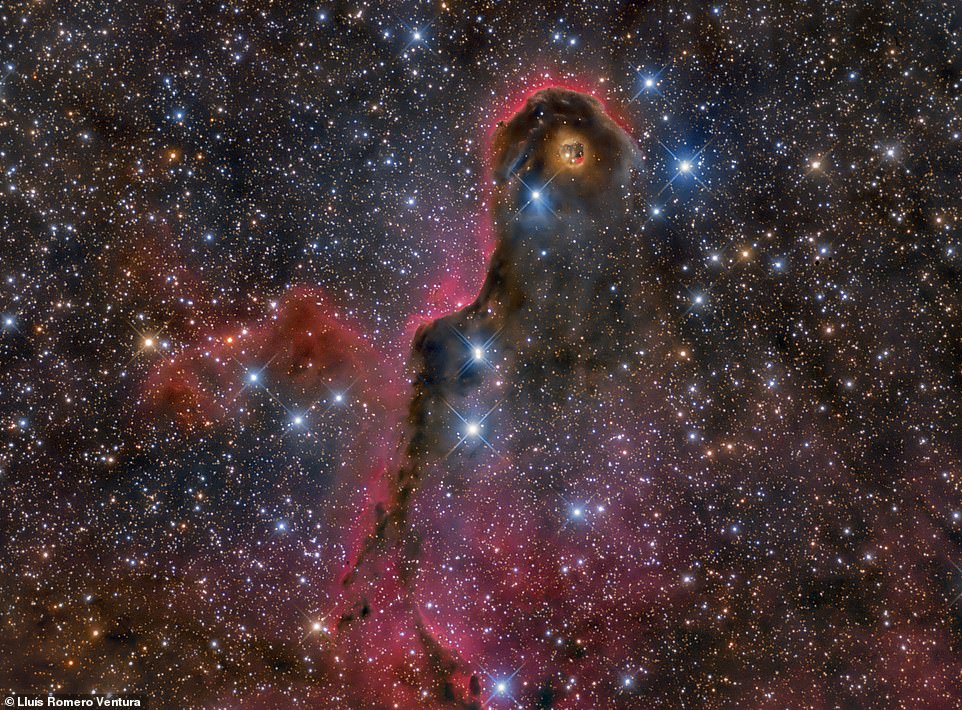 This ‘elephant’s trunk’ is actually a star formation that lies 2,450 light years away in the constellation of Cepheus. It was captured by a photographer in Spain who says the formation is ‘probably one of the most beautiful nebulae that is actively forming stars’ 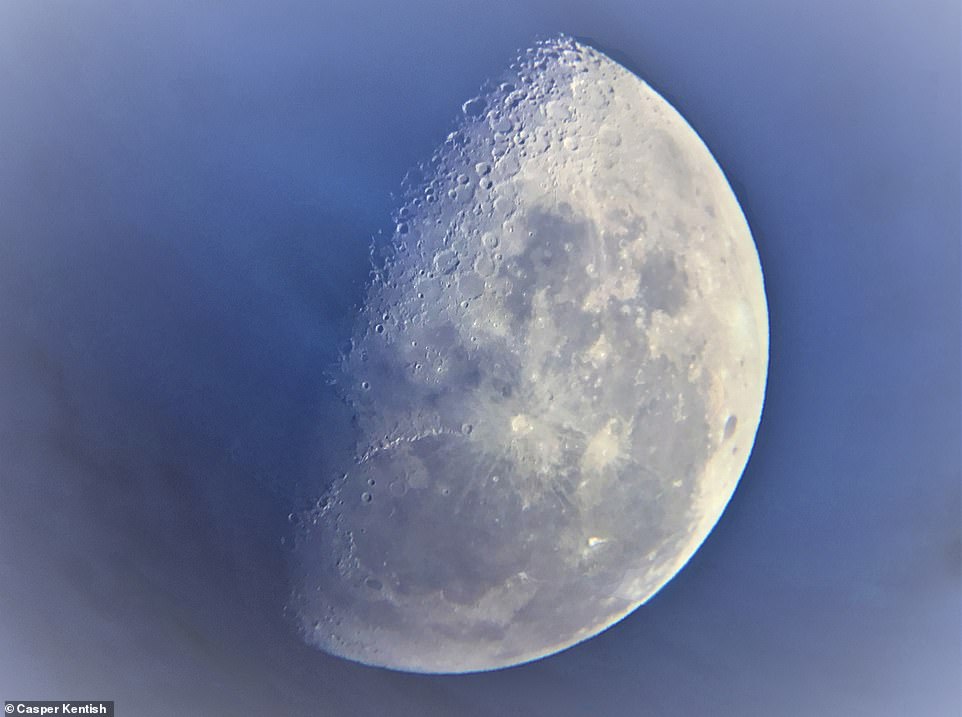 This photographer captured the moon in Ponthirwaun Ceredigion, Wales last October. It was so cold when the photographer looked through his telescope, it fogged up and ice crystals formed 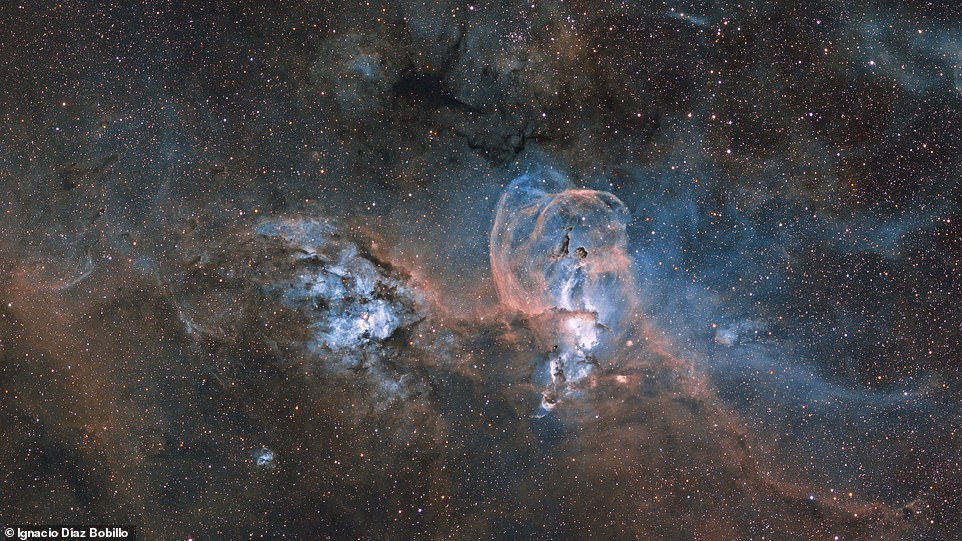 This photographer in Buenos Aires, Argentina took a photo of two nebula complexes. The one on the right, NGC 3576, is closer to Earth than the one on the left 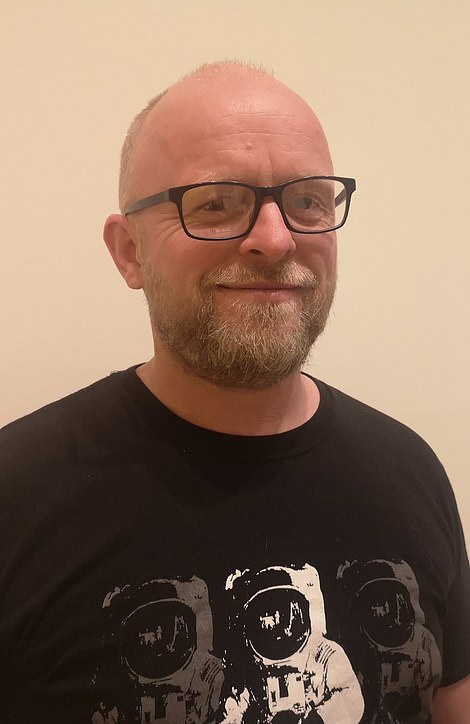 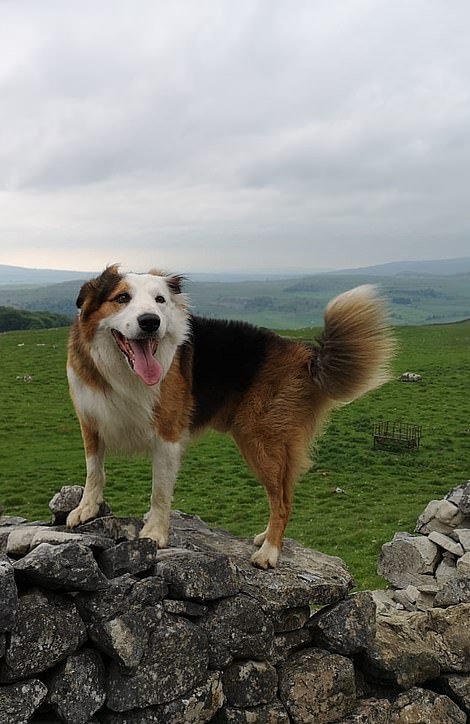 Mr Bush, 40, was out walking four-year-old border collie Floyd when he decided to experiment with his camera. Mr Bush gave up his job as a tree surgeon to work full-time as a star photographer