Two men have been arrested and charged for their alleged involvement in the fire at Old Parliament House in Canberra on December 30.

Detectives from Operation Pike made the arrests on Thursday – exactly two weeks after the fire – with the support of the Australian Federal Police.

The fire, which is alleged to have been deliberately lit by protesters on the steps of the historic building, caused extensive damage.

On the day of the fire, ACT Emergency Services were called to the scene to find the front doors of Australia’s first federal parliament alight. 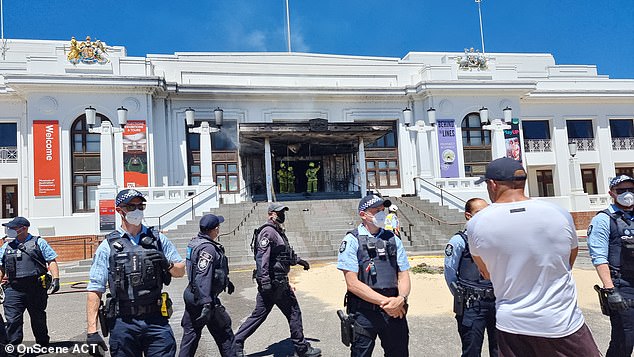 Some protesters shouted ‘let it burn’ as they clashed with police and television crews outside the building.

They also chanted ‘long live us’ and ‘stop telling lies’ and used a megaphone to talk about Indigenous rights and colonisation.

The previous week, Old Parliament House was forced to close when members of the Aboriginal Tent Embassy – which has been a presence on the building’s lawn for almost 50 years – held a sit-in protest and caused a fire at the entrance.

Old Parliament House, which served as Australia’s federal parliament from 1927 until 1988, is now home to the Museum of Australian Democracy.

Deputy Prime Minister Barnaby Joyce called the fire ‘an absolute disgrace’ and said Australians would be ‘disgusted’ by the damage.

Five fire engines and about 40 police officers attended the scene and the building was evacuated as a precaution while crews extinguished the blaze.

WHAT ARE SOVEREIGN CITIZENS?

Sovereign citizens believe that they – not judges, juries, law enforcement or elected officials – should decide which laws to obey and which to ignore.

Most sovereign citizens also don’t believe they should have to pay taxes.

In the US, the FBI has described the movement as ‘domestic terrorism’.

There were chaotic scenes as police dragged protesters away from the front steps of the building. Some of the protesters allegedly attacked media filming the fire.

Among the protesters at Canberra at Old Parliament House are a ‘sovereign citizen’ group who posted a ‘trespass’ notice on the building doors on January 29.

Their notice said that ‘under rule of law and with absolute authority and autonomy, I, Chief Bumajin Gumbaynggirr, representative of the National Sovereign Government, hereby accepts (sic) your acquiescence by default, enforceable immediately.’

It goes on to say that ‘All actions of genocide, complicity in genocide and terrorism are to cease and desist immediately as per today’s date, commencing 29-12-2021.’

The lawn in front of Old Parliament House has been the site of the Aboriginal Tent Embassy since 1972 and is a rallying spot for Indigenous protests.

As the fire burned on December 30, plumes of smoke billowed into the air as firefighters rushed to save the historic building from being gutted by the flames. 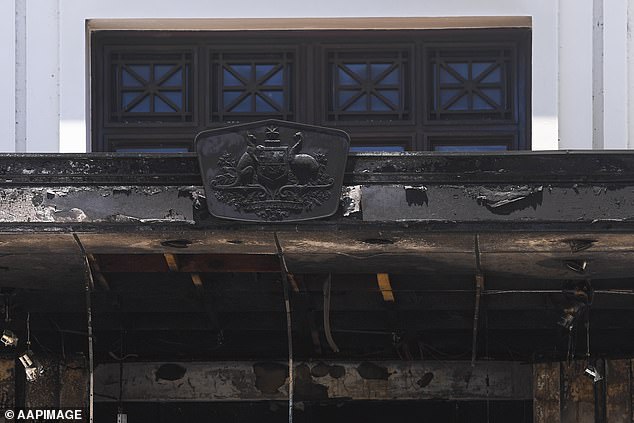 The charred Australian Code of Arms is seen hanging above the entrance doors to Old Parliament House in Canberra, Thursday, December 30, 2021

The unruly crowd had to be held back from the building by a line of police before the altercation became a full-blown brawl.

Within hours of the building going up in flames, Greens senator Lidia Thorpe posted a tweet – which was hastily deleted – remarking ‘the colonial system is burning down’.

She was quickly slammed for the post, in which she appeared to celebrate the destruction and told followers ‘Happy New Year everyone’. 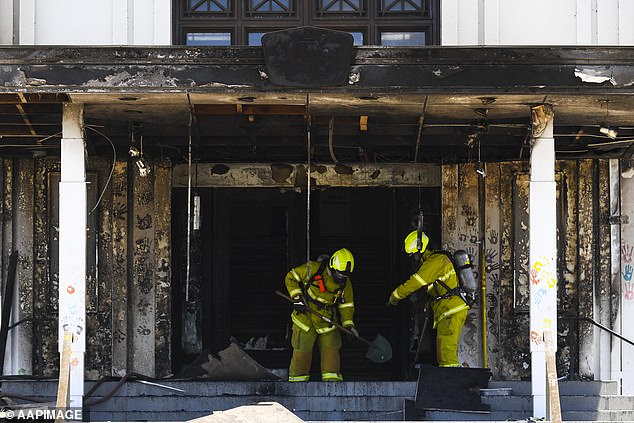 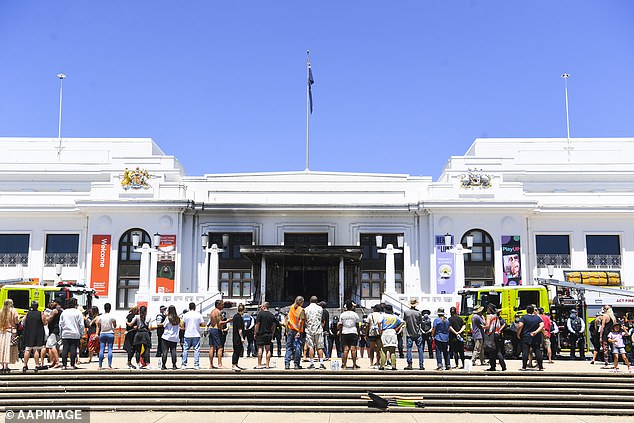 Protesters stand in front of the burned out entrance doors to Old Parliament House in Canberra, Thursday, December 30, 2021

Both of the men arrested on Thursday are expected to appear in the ACT Magistrates Court on Friday morning.

Two other men and a woman who were arrested at Parliament House on Thursday were charged with breach of the peace.

The Operation Pike joint taskforce is continuing investigations to identify other people involved in the fire and other criminal activity.

The joint taskforce has now charged three people for their alleged involvement in the fire at Old Parliament House.

Anyone with information that could assist police in relation to criminal activity in the Parkes, ACT area is urged to contact Crime Stoppers on 1800 333 000, or via the Crime Stoppers ACT website, quoting reference 6993036. Information can be provided anonymously. 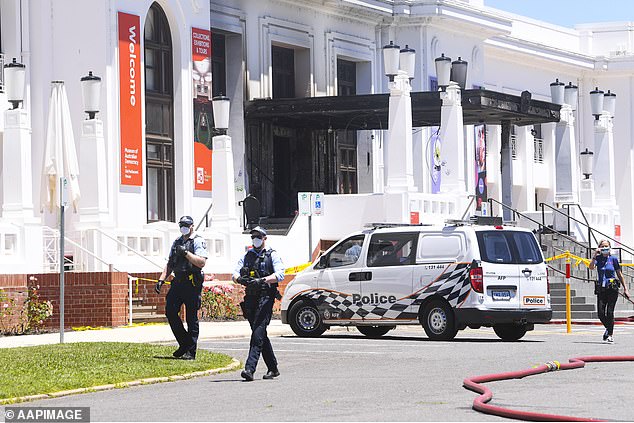 Police officers stand guard in front of the burned out entrance doors to Old Parliament House in Canberra, Thursday, December 30, 2021