A giant, 11-foot alligator snatched and killed a victim from a South Carolina pond Friday – with one local claiming the victim was taken while cutting grass around the pond that their homeowners’ association had refused to chop.

Horry County fire department officials said they were initially called to the scene of the Myrtle Beach Golf and Yacht Club for a water incident in a community pond.

By the time they arrived at around 11.45am, police spokeswoman Mikayla Moskov said, ‘units determined that an alligator had taken hold of a neighbor, and retreated into a nearby retention pond.’

The victim was near the pond when he was pulled in, Horry County police officials announce, and was removed from the pond upon arrival.

The South Carolina Department of Natural Resources and its alligator removal service euthanized the animal on the scene.

Authorities say there is no ongoing threat to residents and travelers in the area.

One resident wrote on Facebook that the incident allegedly happened after the condominium complex refused to cut the grass around the retention ponds, and she said, residents have asked for years for traps to be put up.

‘The entire reason it happened is because the HOA refused to cut the grass around the pond anymore, [so] the homeowner went out there and took it upon himself to do it,’ Trea Donohoe wrote on a community Facebook group. ‘And that’s how it happened.’

An investigation into the unknown victim’s death is ongoing, and Horry County Chief Deputy Coroner Tamara Willard said the coroner’s office will release more info about the case on Monday.

In a statement, police said: ‘Our hearts go out to the family and community members impacted by this tragic incident.’

Fire department officials were called to the scene of the Myrtle Beach Golf and Yacht Club on Friday morning for a water incident, and when they arrived on the scene they found an unknown victim dead in an alligator-infested pond 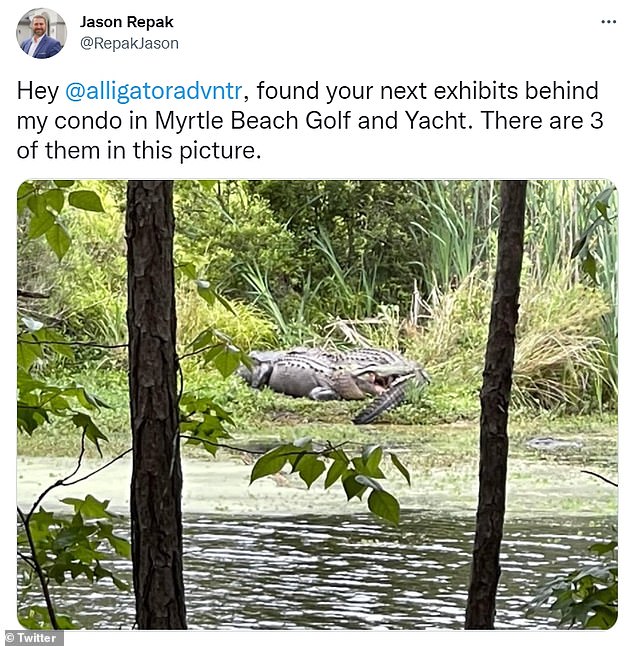 Alligators have been spotted in the area for years.

On May 8, resident Jason Repak tweeted a photo of an alligator coming out of the pond, joking that three alligators must have escaped a nearby alligator zoo.

But following the news of the fatality on Friday, he replied to his tweet, writing: ‘I couldn’t have imagined that it was likely one of these alligators that would later kill a man.

‘My prayers and heart go out to the family, as my arms wrap tighter around my kids and dogs near these ponds.’

He told MyHorryNews that there are several 12 to 14-foot gators in the retention pond of the condominium community, explaining that there is a two-way road between the pond where the incident occurred on Friday and another retention pond behind his condo.

He said he is always cautious in the area while walking his dog.

‘We’ve never gone anywhere close to them,’ he said. ‘When we walk the dogs near that pond, we walk them in the median. We don’t walk them on that bank because you just don’t know where they’re lurking.’

And to his knowledge, he said, all of the residents ‘have always treated the alligators with a healthy respect, and almost like part of the community.

‘This is just a tragedy that nobody would have expected.’