Brazil’s president Jair Bolsonaro today revealed he has tested positive for coronavirus – but dismissively removed his mask as he told reporters he felt ‘perfectly well’.

Bolsonaro, who has repeatedly played down the severity of the virus and mingled with crowds of supporters in spite of social distancing rules, said his fourth coronavirus test had come back positive but insisted he had only mild symptoms.

‘I’m well, normal. I even want to take a walk around here, but I can’t due to medical recommendations,’ said Bolsonaro, 65.

He also revealed he has been taking hydroxychloroquine, an anti-malarial drug championed by Donald Trump with unproven effectiveness against Covid-19.

The far-right president told supporters yesterday that he had been tested at a hospital and that an X-ray showed his lungs were ‘clean’.

Brazil has suffered one of the world’s worst outbreaks with more than 1.6million cases and 65,487 deaths, both figures second only to the United States.

Bolsonaro tested negative three times in March after meeting with US president Donald Trump in Florida.

Multiple members of his delegation to the United States were later reported to be infected with the virus, but neither Bolsonaro nor Trump tested positive.

On Monday, Bolsonaro told supporters in Brasilia that he underwent an X-ray of his lungs that showed they were clean, and that he would be tested for Covid-19.

‘I can’t get very close,’ he said in comments recorded by Foco do Brasil. ‘I came from the hospital. I underwent a lung scan. The lung’s clean.’

The president’s office said in a statement that the president is at his home and is ‘in good health.’ Today he said his fever had subsided despite his positive test result.

Bolsonaro, a former army captain, has previously said that his history as an athlete would protect him from the virus, and that it would be nothing more than a ‘little flu’.

The populist leader has often defied local guidelines to wear a mask in public, even after a judge ordered him to do so in late June.

Over the weekend, the Brazilian leader celebrated America’s Independence Day with the US ambassador, standing close to him alongside ministers and aides.

The US embassy said that Ambassador Todd Chapman is not showing any Covid-19 symptoms but would be tested.

The president’s official events on Tuesday have been cancelled, Brazilian media says.

Bolsonaro is among the most high-profile leaders to have tested positive for the virus, following Boris Johnson who spent three nights in intensive care in April.

World Health Organisation expert Mike Ryan today said the WHO ‘wished [Bolsonaro] a full and speedy recovery from this disease’. 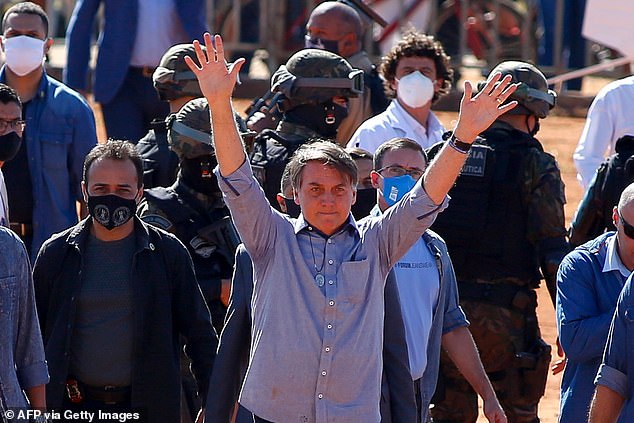 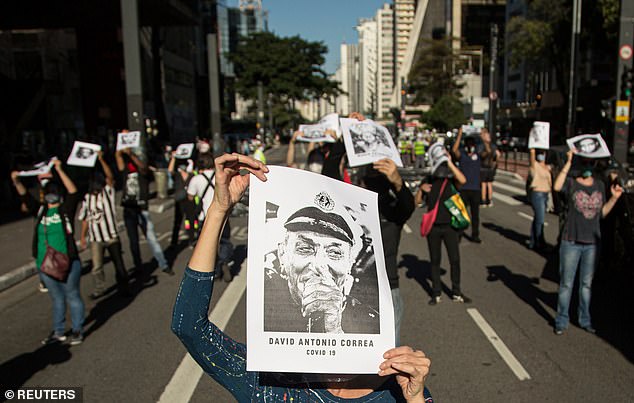 Demonstrators take part in a protest against Brazil’s President Jair Bolsonaro as they hold images of people who died from the coronavirus disease (COVID-19) or police violence since the military dictatorship, at Paulista avenue in Sao Paulo, Brazil July 4, 2020

Bolsonaro has come under severe criticism after downplaying the virus as a ‘little flu’ and continuing to ignore social distancing advice even as the crisis escalates.

The president has lambasted regional governors for imposing lockdown measures against his wishes which he says will be more damaging than the virus itself.

Asked on one occasion about the high death toll, Bolsonaro said: ‘So what? I’m sorry, but what do you want me to do?’.

Like Donald Trump, he has also touted the drug hydroxychloroquine as a Covid-19 treatment despite doubts about its effectiveness.

In recent days he has watered down a law that would require citizens to wear face masks in public.

On Friday he vetoed several articles of the bill such as those requiring employers to supply masks for their staff and another mandating that authorities should provide masks for ‘economically vulnerable people’.

Yesterday Bolsonaro also vetoed sections requiring masks be worn in prisons and another obliging businesses to provide information on how to wear masks properly.

Some states have already made the wearing of face-coverings mandatory, but this was the first such law on a national level.

Since Bolsonaro was in a private residence at the meeting with the US ambassador, he did not break the new law – but that did not spare him from an avalanche of criticism online for not providing a good example.

Bolsonaro’s government also tried to remove the majority of virus statistics from its official website, before a judge ordered him to reinstate them.

The latest figures show 1,623,284 confirmed cases and 65,487 deaths in Brazil, the second-highest tallies in the world.

The last seven days alone have seen more than 250,000 new cases and 7,173 deaths, more than many countries have suffered in total.

It is also feared that the true toll is far higher because of a lack of widespread testing in Latin America’s largest country. 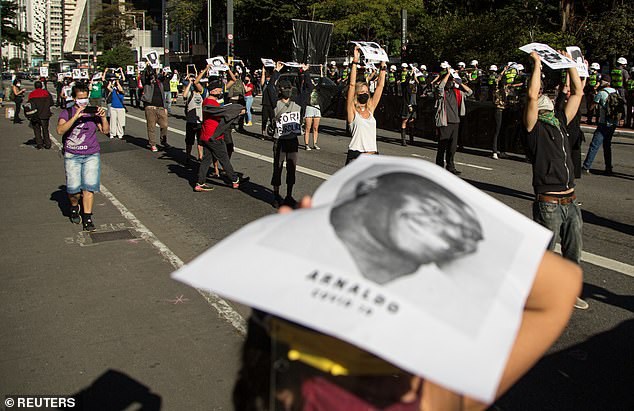