EXPRESS INFORMER > News & Politics > Brain-fog busters in a bottle: Smart oil that can raise your IQ to pills that claim to sharpen wits

More forgetful than normal? Having trouble concentrating? Easily distracted? You’re not alone: another casualty of the pandemic appears to be our capacity to think clearly.

Brain fog, say experts, is a consequence of the mental stagnation we’ve all suffered under lockdown.

Missing the stimulation of a rich and varied social life, and still reeling from a year of Covid-inspired anxiety, many of us are feeling a lack of motivation and focus.

It’s been called a state of ‘languishing’ — the mid-point on a spectrum between flourishing and depression. Think of it as muddling through; unable to muster the brainpower to tackle the to-do list or the sense of purpose to begin a new project.

‘People’s lives are much less varied, less distinctive, with far fewer vivid and rich experiences than usual,’ says Jon Simons, professor of cognitive neuroscience at the University of Cambridge.

‘Our brains are stimulated by the new, by variety. We’ve had a lot less of that, and that has a knock-on effect on our ability to be oriented, to remember things, to stay attentive.’

For most people this is temporary, he says, and hopefully, as we get back to normal life, these periods of feeling a bit fuzzy will diminish.’

But in the meantime, how can we sharpen up?

We could eat a better diet, of course. Professor James Goodwin, a special advisor to the Global Council on Brain Health and author of Supercharge Your Brain: How To Maintain A Healthy Brain Throughout Your Life, stresses the huge importance of omega 3-rich fish.

He recommends eating 4 oz of cold-water fatty fish four times a week — the equivalent of four salmon or mackerel fillets or four cans of tuna.

But many of us eat nowhere near that amount, so perhaps popping a pill could help?

Certainly, our enthusiasm for allegedly brain-boosting supplements has reached heady heights. In 2020, the global market was valued at £5.21 billion and the pandemic has only bumped up sales, according to market research firm Grand View Research.

Asprey claims that in combination with other ‘health hacks’, his daily cup of supercharged caffeine helps boost his IQ score by more than 20 points. I’m naturally sceptical of big claims like these, but I’m also game for trying anything to offset those muddled moments. It’s alarming not to be able to concentrate on a book for more than ten minutes.

With the help of registered nutritional therapist Sian Baker, head of wellbeing services at Health Hub Teams, I put six products with the biggest brain de-fogging claims to the test…

‘NOOTROPIC’ IS MORE THAN A BUZZWORD 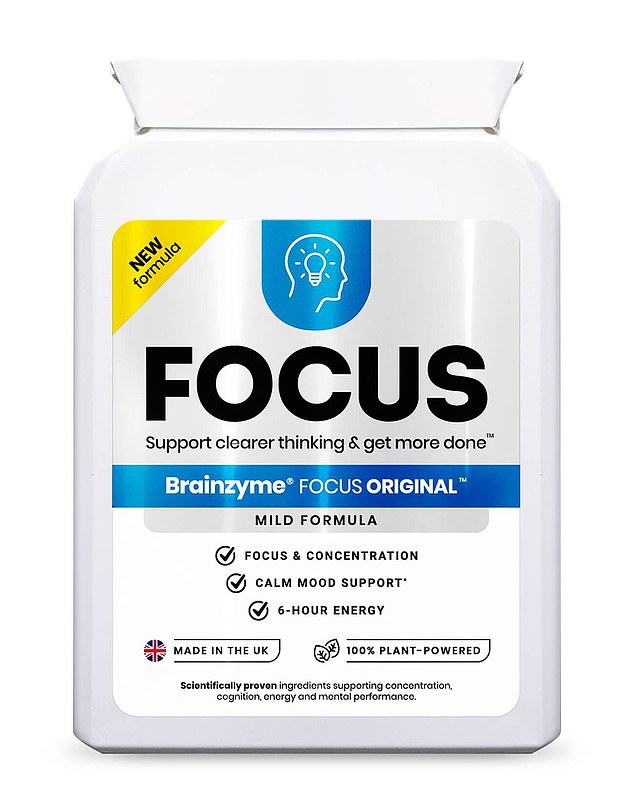 This is a 100 per cent plant-powered ‘nootropic’, or smart drug. Nootropics are the brain boosters of the moment, even though natural ones, including Lion’s Mane mushrooms and ginkgo biloba, have been used for centuries in Chinese medicine and ayurvedic healing.

Each of these capsules contains amino acid L-theanine, thought to help ease anxiety and stress, something called EGCG, a plant-based compound thought to reduce inflammation and help prevent heart and brain disease, plus guarana seeds to alleviate fatigue and keep you alert.

Brainzyme, the small UK company behind them, says they’re ‘designed to help improve your focus, energy and motivation.’

The promise is: ‘After 45 minutes, you’ll feel your brain fog lifting and your mind clearing. After 60 minutes, your brain will be processing information faster than normal.’

Sian says: ‘This is a superb combination of antioxidants, phytonutrients, B vitamins, minerals plus amino acids L-theanine and L-tyrosine.

‘L-tyrosine is used to synthesise chemical messengers and helps to improve memory during stressful situations, such as multitasking. In addition, it supports immune function and energy production.’

MY VERDICT: One day last week, I woke up and felt draggy-eyed and bone-tired. Coffee made no difference, so at 10.30 am I swallowed two capsules. With hindsight, my being smaller than the average adult, at 5ft 2in, meant one would have sufficed.

Hours later, I felt jittery and my sentences tumbled over themselves. That evening, my husband joked: ‘Your stories are 20 per cent longer than normal.’ Later, though, he told me I should take it more often — at half the dose. ‘You lit up. You were very different. You had more words, you were more upright.’

FINE TUNING FOR THE OVER-50s

This is two supplements together, targeting the needs of the over-50s. One is a capsule of concentrated, high quality omega 3 DHA fish oil, to support normal brain function. The other is a micronutrient capsule containing the likes of iron, zinc and iodine, which contribute to normal cognitive function, plus vitamins B12, D and E, folic acid, magnesium and selenium.

Sian says: ‘This supplement provides essential fatty acids together with vitamins, minerals, phytonutrients and amino acids that are of utmost importance in supporting brain health and normal cognitive and psychological function.

MY VERDICT: I’d need to take this for months to give it a fair review, but the capsules are easy to swallow and include concentrated extracts of turmeric, grape seed and green tea — believed to scavenge cell-damaging free radicals.

I like the two-in-one aspect — all bases are covered.

The oil of which Orlando is such a fan is made from medium-chain fatty acids (or MCTs — medium chain triglycerides), which come from coconut. It’s claimed this will ‘make sure your brain performs at its best all day’. How? The oil is called a ‘smart fat’ and it is claimed it can ‘kickstart’ the fat-burning process associated with a very low-carb, high-fat ‘keto’ diet.

It’s been suggested that this process can boost energy supplies to the brain and even enhance mental performance.

Sian says: ‘This is an excellent choice for those looking to support a ketogenic diet or utilise ketones as an energy source. But be aware that MCTs can still be stored as fat, just like excess fat, carbs or calories in general — so ensure this is added to your diet in the right way, and doesn’t just lead to an increase in energy intake.’

MY VERDICT: I add a teaspoon to my coffee. Oily coffee? Mmm. Orlando’s preference is to mix it with ‘green powders’ he eats at breakfast.

The liquid is tasteless and odourless, but I’m not impressed. There is 14 g of fat in one tablespoon, and as I’m not on a ketogenic diet, it feels as if I’m missing out on any potential benefits — sucking up every calorie with no boost to my mental performance. 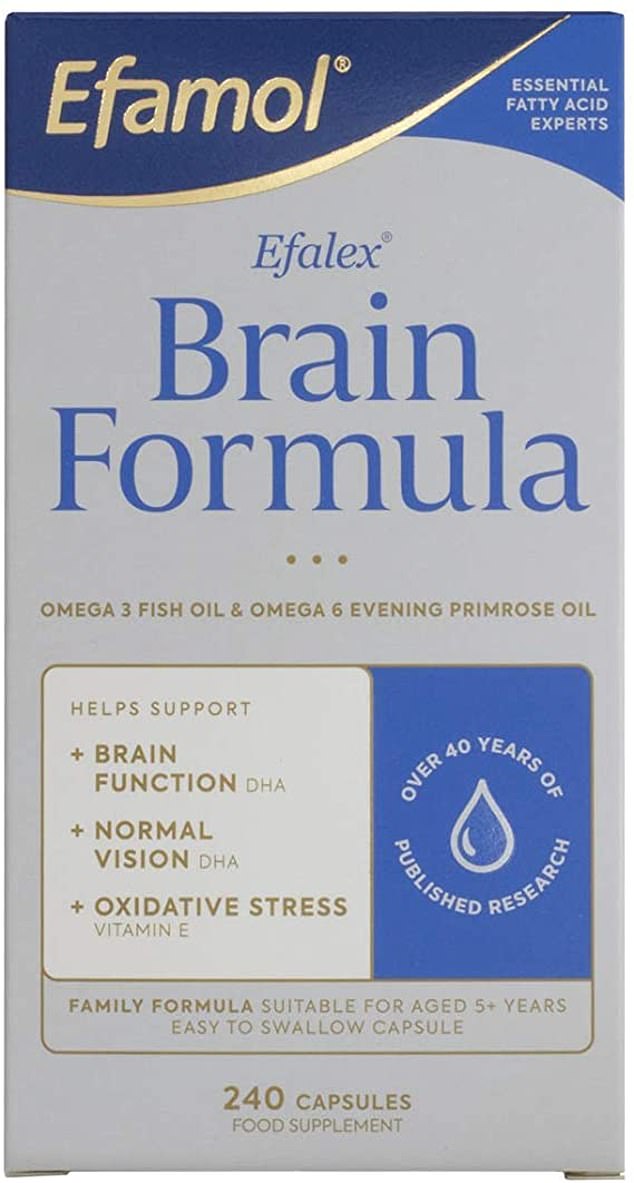 A unique blend of fish oil and evening primrose oil, including omega-3 fatty acids DHA and EPA, and omega-6 fatty acids GLA and AA. DHA is the most abundant omega 3 fat in your brain and is needed to keep it functioning optimally.

Sian says: ‘Omega 3 and 6 build cell membranes throughout the body, and studies have shown they play a role in the healthy ageing of the brain.

Omega 3 is far harder to take in through the diet, particularly if you don’t eat oily fish, so a high-strength supplement is highly recommended.’

MY VERDICT: It’s recommended you take four capsules a day, and double this for the first 12 weeks to optimise stores. It feels a bit much, but this is a quality supplement. The fish oil is harvested from sustainable stocks, and they’ve used the same growers in the Netherlands and New Zealand for their evening primrose oil for 40 years.

SIP YOURSELF SMART WITH A HERBAL SHOT 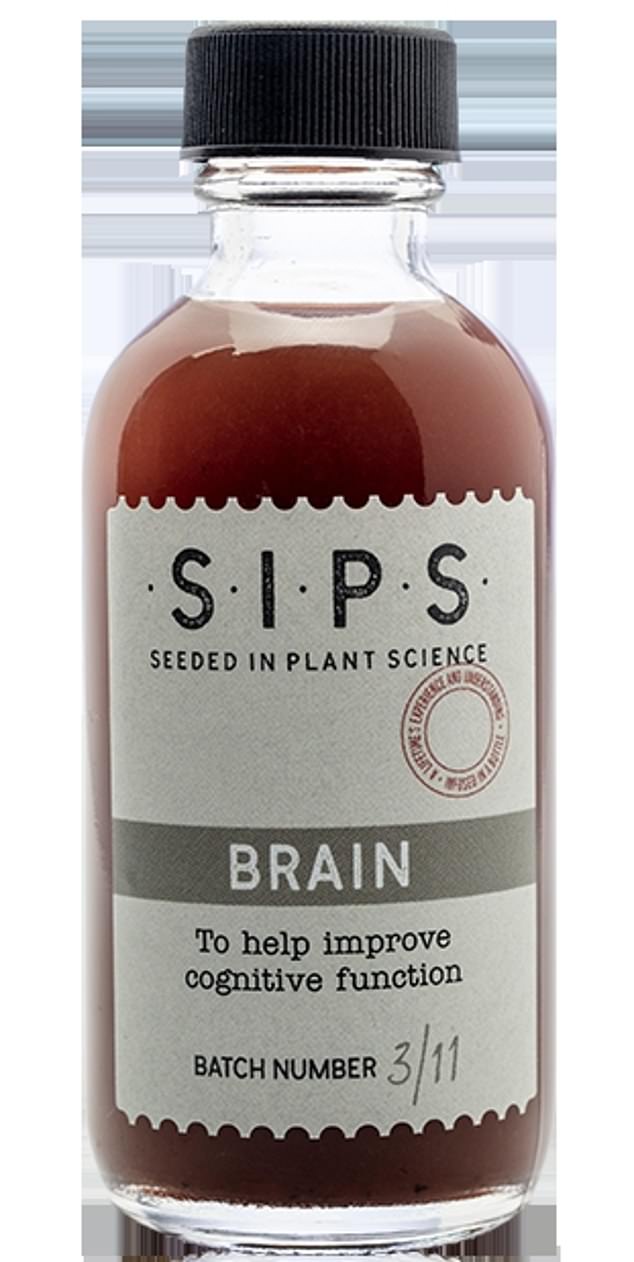 Sian says: ‘This is an uplifting and brain-invigorating juice, providing a dense concentration of herbs. Ginkgo biloba contains various flavonoids, is known to act as a vasodilator [widen blood vessels] and can enhance cerebral blood flow.’

MY VERDICT: I sip this at spaced intervals daily, as suggested. Its light rosemary flavour grows on me, and because it contains pomegranate juice, maple syrup and grape juice, it’s fairly sweet. It perks me up, but I’d need to take it for weeks to notice any benefits — at quite some cost.

CELL PROTECTOR TO FIGHT OFF BADDIES 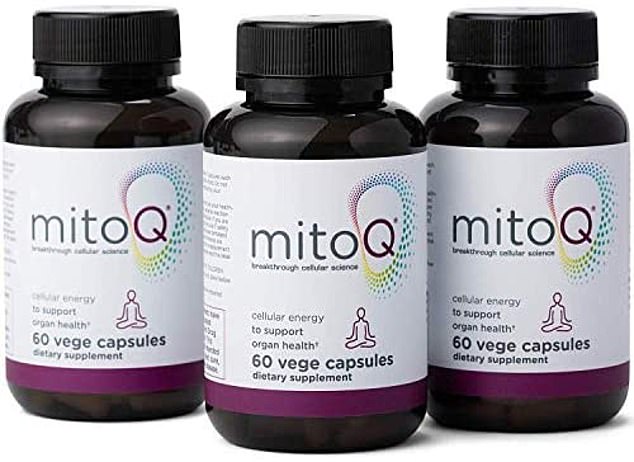 This supplement is described as ‘antioxidant technology’ designed to help re-energise and revitalise cells to support cognitive function, mental clarity and neurological health.

Sian says: ‘This is a powerful combination of antioxidants, each one with a specific role in brain health and function.

‘CoQ10 is a key ingredient, as one of its roles in the body is the reduction of oxidative stress, which can cause inflammation, tissue damage and cell death and is linked to a number of diseases, including Alzheimer’s and Parkinson’s.

‘CoQ10 is also known to be important for heart health.’

MY VERDICT: A supplement being pricey is no reflection of quality, but I take this hoping for great things — and enjoy imagining the antioxidants killing off the baddies. The price, though, does make me wince.