Bradley Cooper has been transformed into famed composer and conductor Leonard Bernstein through the artful use of prosthetics and movie makeup for the upcoming biopic Maestro.

And on Wednesday the leading man, who’s also serving as director, was spotted on the set preparing to shoot another scene in New York City as a younger version of his real-life character.

Not long later, Sarah Silverman, who plays Leonard’s sister Shirley Bernstein, would join Cooper on set for the first time since the production shifted to Manhattan.

Getting into character: Bradley Cooper, 47, transformed into famed composer and conductor Leonard Bernstein for another day of shooting in New York City for the Netflix biopic Maestro

Cooper, 47, looked to already be fitted with a prosthetic nose for his portrayal of Berstein by the time he was seen on the bustling streets.

The costume department had him dressed in a gray retro suit with a white dress shirt and short black-patterned tie.

The two-time Grammy Award winner also sported brown dress shoes, and had his dark brown hair parted to the side, with the exception of a few loose strands curling over his forehead.

As the crew were getting prepared behind the scenes, Cooper could be seen off to the side with a cigarette in his mouth, which appeared to be a prop for the next scene. 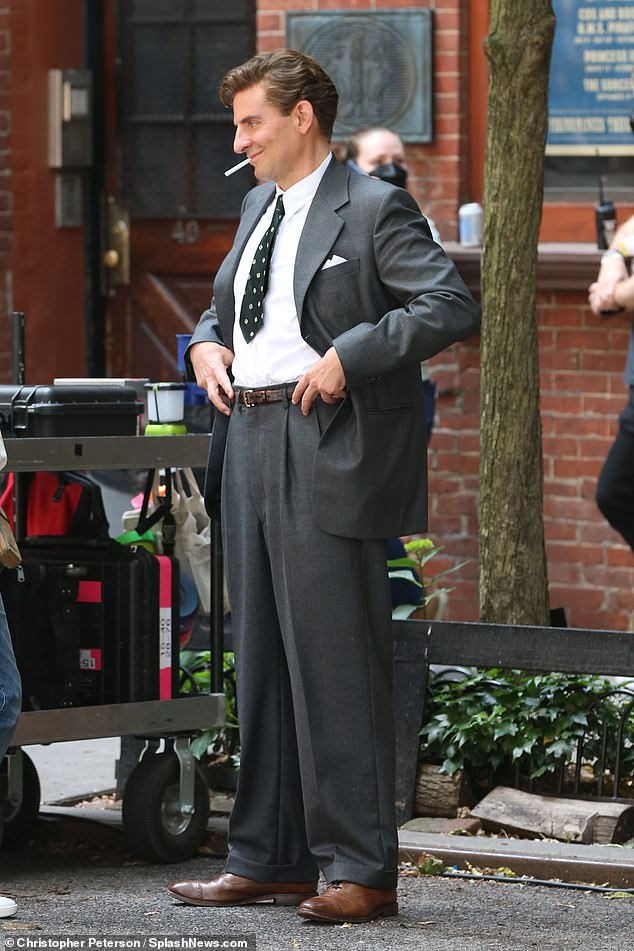 Take five! Cooper looked to already be fitted with a prosthetic nose for his portrayal of Bernstein as he prepared to shoot another scene in his retro gray suit 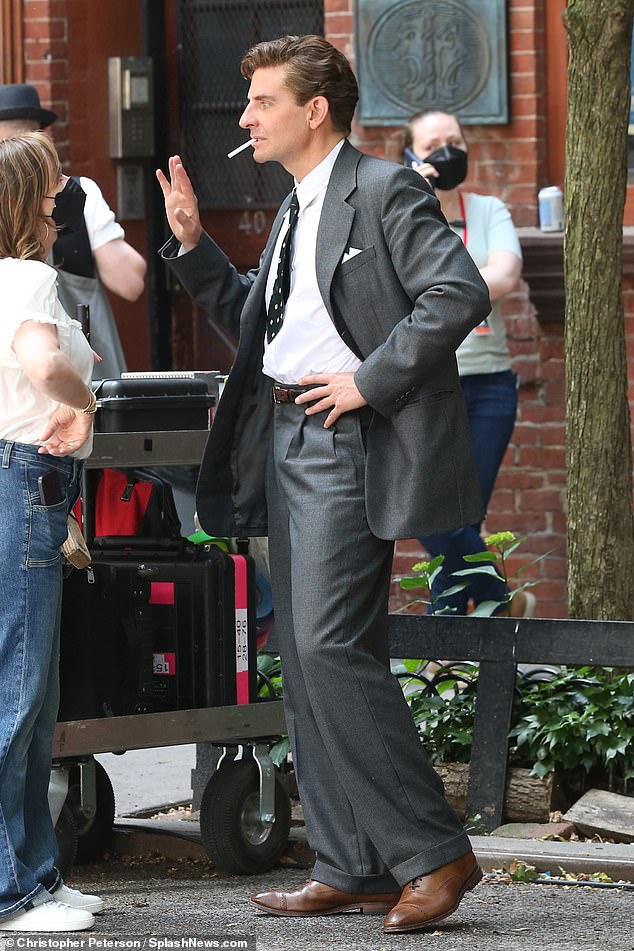 Scene set-up: Cooper could be seen on set with a cigarette in his mouth, which appeared to be a prop, talking with crew members as they prepared to shoot another scene

He flashed a big smile just as he began a conversation with what appeared to be one of the director’s assistant’s, as well other members of the crew.

At one point, the Pennsylvania native was seen walking across a street with the cigarette still in his mouth in an apparent test run for an upcoming shot.

This is the first film Cooper has both starred and directed since A Star Is Born (2018), which went on receive eight Academy Award nominations, including Best Picture and Best Actor.

The day’s events also included Silverman, 51, making her debut on the set with her hair done up in what looked to be the style of the late 1940’s-early 1950s.

Still in preparation mode, the actress and comedian appeared to be wearing her normal civilian cloths, consisting of black pants, a black and white striped shirt and green slippers. 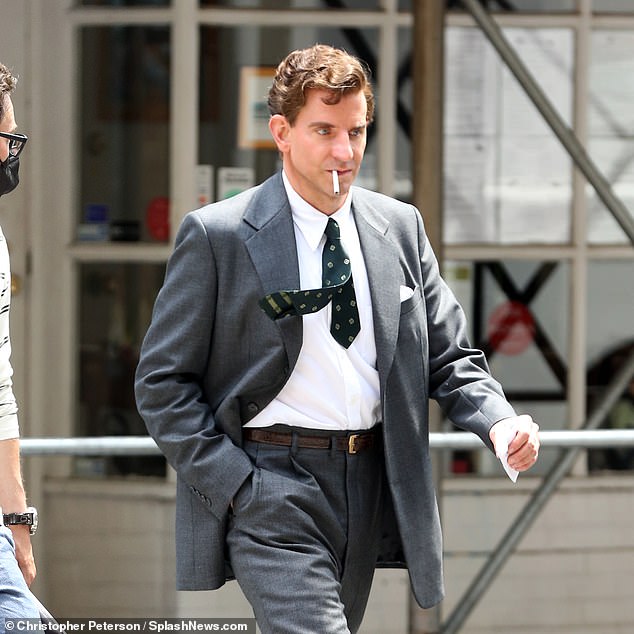 Double duty: Cooper is both starring in the film and serving as director for the first time since he did double duty for A Star Is Born (2018), which went on to receive eight Oscar nominations

The film, which was also co-written by the Hangover star, focuses on the complex relationship between Bernstein and Montealegre. Despite grappling with his own sexuality and a turbulent on-off engagement, the couple ended up marrying in 1951 and had three children.

Considered to be one of the most important conductors of his time, Bernstein was the first American conductor to receive international acclaim, earning him seven Emmy Awards, two Tony Awards and 16 Grammy Awards during his storied career.

His best-known work is the Broadway musical West Side Story, which continues to be regularly performed worldwide, and has been adapted into two feature films (1961 and 2021).

Maestro is expected to debut on Netflix sometime in 2023. 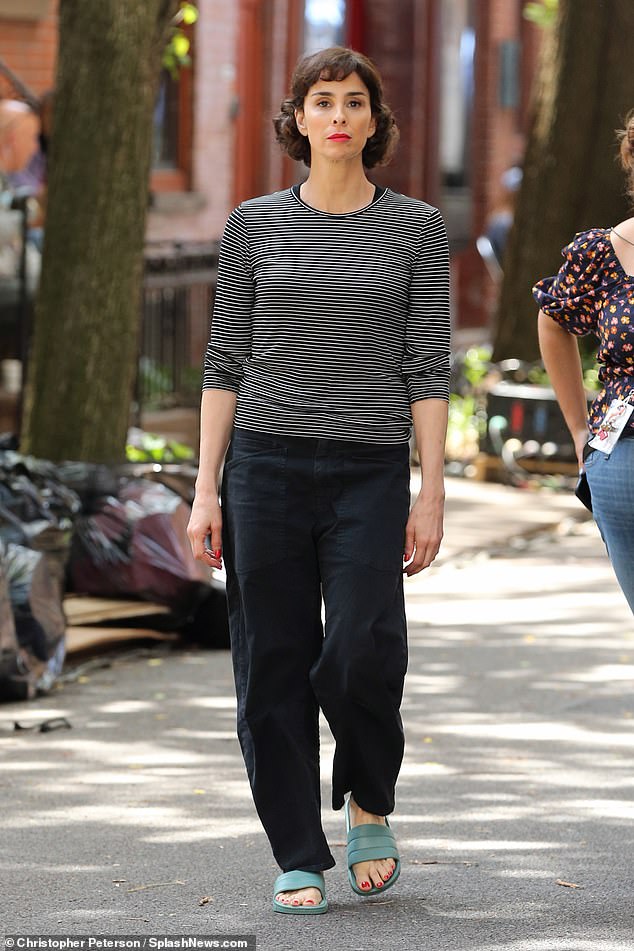 Joining the crew: Sarah Silverman, 51, who plays Leonard’s sister Shirley Bernstein, was seen on the set with Cooper for the first time on Wednesday 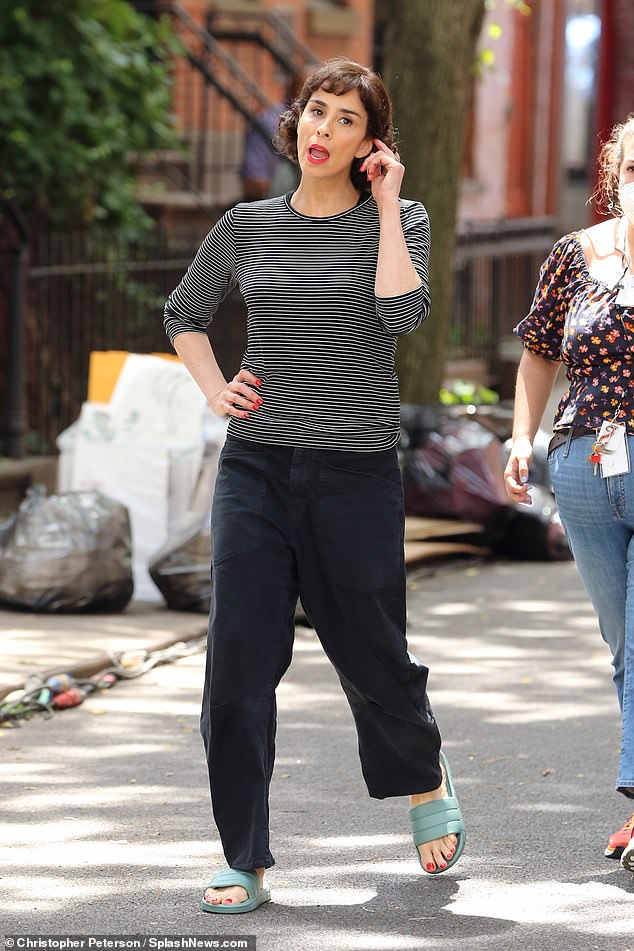 Prep mode: Silverman, 51, had her hair styled and ready for her scene, but had not yet changed into her retro costume yet; the biopic is said to be focused on the Broadway icon’s relationship with his wife Felicia Montealegre, who’s being portrayed by Carey Mulligan