For months the windfall tax has been at the front and centre of discussions about BP. But behind closed doors there is another scandal simmering away.

The FTSE 100 giant has still not ditched its stake in Russian oil behemoth Rosneft, despite pledging to exit nine months ago.

Activists and politicians last night attacked it for its ‘business as usual’ approach and ‘shocking’ inability to quit or sell the investment.

‘Business as usual’: FTSE 100 giant BP has still not ditched its stake in Russian oil behemoth Rosneft – despite pledging to exit nine months ago

BP, which has owned nearly 20 per cent of the Russian state-backed energy company since 2013, promised to cut ties in February after Ukraine was invaded.

BP’s representatives on Rosneft’s board, chief executive Bernard Looney and former boss Bob Dudley, quickly stood down. This was despite Looney saying just weeks earlier that the £88billion group was ‘committed’ to Russia.

The British firm took a one-off hit of £18.7billion by writing off the Rosneft shareholding from its books but it still owns the stock and refuses to say how and when this will change.

It is unclear who it could sell to as the West has sanctions on Russia, and bidders in other countries may also be unwilling to get involved.

Rosneft has also taunted BP from afar, with Rosneft boss Igor Sechin goading Looney in October by saying the company should reconsider its position.

Sechin said: ‘Despite all the rhetoric, BP remains, I would say, a ‘shadow’ shareholder.’

He added that it could ‘only heartily advise our BP colleagues to remove the issue of exiting assets in Russia from the agenda’.

Sechin said Rosneft had put aside a £600million dividend for BP into a separate Russian account, which it could still claim back. BP has brought in a total of £3.75billion in dividends from Rosneft since 2013.

Lord Teverson, who sits on the House of Lords international relations and defence committee, said: ‘It’s shocking that BP has not fully disentangled itself from its Russian connections. 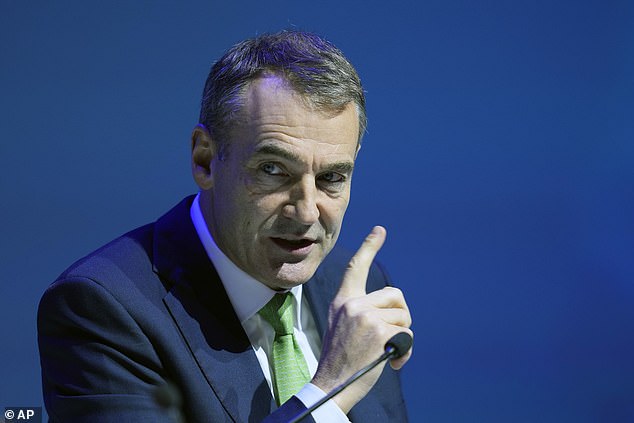 BP told the world it was disposing of its Rosneft interest. Instead, it is still involved in a company that funds the Russian war machine.’

Financier-turned-activist Bill Browder said: ‘BP is still deeply connected. Surely there’s no appetite to leave other than being forced to by external events and shameful PR if they didn’t.

‘I can imagine that the Russians aren’t making it easy for them. But there is nothing “shadow” about this – they own 19.75 per cent of Rosneft, whether they’ve taken the accounting hit or not.

‘BP should do what they said they should do and divest from Russia, not do anything that shows support for Vladimir Putin or his murderous war in Ukraine.’

Others have pulled out of Russia including Shell, which quit a major gas project called Sakhalin 2. But Morningstar analyst Allen Good said these exits were more straightforward as firms have just had to leave individual projects.

The saga comes as oil and gas companies have been targeted for a higher windfall tax on North Sea profits. Chancellor Jeremy Hunt raised the Energy Profits Levy to 35 per cent in the recent mini-Budget, up from 25 per cent.

It is not clear how much BP will pay. As higher commodity prices turbo-charged revenues it reported staggering profits of £7.1billion in the three months to September.

BP said: ‘BP’s position is unchanged. In February we announced our decision to exit Rosneft and other Russian businesses. We continue to pursue this, we have no further comment on progress.’