EXPRESS INFORMER > News & Politics > Boy, two, with photographic memory can name every flag he has ever seen

A two-year-old child from Liverpool can name every flag he sees and has already started learning Russian.

Harry Pile has what his parents call a ‘photographic memory’ and they have been astounded at the pace the toddler can retain and recall information.

Mum Shellie and dad Steve have been blown away by Harry’s ability and passion for learning – which is all dictated to them by Harry.

Steve, a financial adviser, said: ‘He just retains everything. He is the one that is grabbing your finger and asking what things are – it is like he is teaching himself.’

They were keen to stress they do not push Harry and he is the one asking to play the difficult memory games.

And it is all just a fun game to Harry who demonstrated his skills for the Liverpool Echo by identifying a whole host of flags by image and then by reading them – a skill most children can only master confidently by the age of seven.

Looking back to early signs of Harry’s intelligence, Shellie, 29, said: ‘When he was first born, we noticed that he was really alert. His eyes were so big and open, we would joke that he always looked shocked.

‘And at about 11 months he really took a shine to education. By 18 months he could spell and read his own name and he knew all his complex shapes, telling the difference between a rhombus and a pentagon.

‘He can count in different languages and once he started to talk, it just kind of snowballed.’ 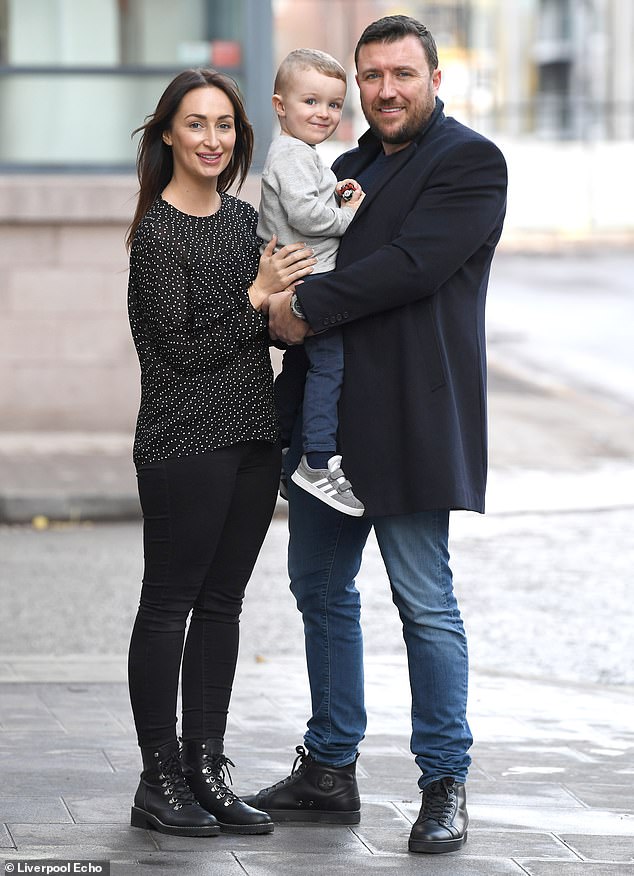 Looking back to early signs of Harry’s intelligence, mum Shellie, 29, said: ‘When he was first born, we noticed that he was really alert. His eyes were so big and open, we would joke that he always looked shocked’

At Harry’s two-year check-up with a health visitor she brought up Harry’s special ability to retain information.

Shellie said: ‘He was still playing with his Paw Patrol toys and developing normally, I thought maybe he was overexposed [to certain educational subjects], but when he started retaining all the flags, I started looking for answers.’

Shellie and Steve, 41, searched for help online on ways to help Harry progress and what the best possible path for him would be when they found the National Association for Gifted Children.

But the association can’t help until Harry is three when he can take their tailored IQ test.

Shellie said: ‘There is not a lot of information out there, but I read this book from another mum who had a gifted child and it was just like reading about Harry.’

Shellie said: ‘The flags started when I found out that Steve had memorised them when he was little. So, I thought it would be a fun thing for me to do with Harry.

‘I never thought he would be able to do it so quickly and at 24 months he knew them all.’

But the learning is very much led by little Harry and his inquisitive nature, Shellie said.

‘Then he wanted to know what all the stars were on the American flag were, so we have started that [learning the US states and their flags].

‘He is constantly asking questions, he seems to have a photographic memory.

‘Even down to the emotional education, he is just such a caring and loving little boy.’

Shellie believes it is the shapes that Harry recognises most and he has already branched out into identifying the Russian alphabet.

But, while it has been extremely exciting for the proud mum and dad, they admit they can sometimes be overwhelmed about the best future decisions for their two-year-old.

Steve and Shellie have already begun looking at nurseries and some have said Harry could plateau, something they can’t see happening anytime soon given Harry’s unique ability to retain information.

Shellie is hoping the IQ test will help get him the right support when he enters education.

She said: ‘Unfortunately children who are gifted can go misdiagnosed. Every parent is proud of their child and we just want Harry to be happy and get the right support he needs that puts him on the right path.’

Steve said: ‘And there could be other kids out there who can do very similar things and their parents don’t know what to do, we just want that awareness that children need support even if they are gifted.’

Even Harry’s older brother John, six, helps out. Shellie said: ‘He is Harry’s best friend, he just idolises John and he sits with him and his books because John is very intelligent too.’

It is not all flashcards and flag books though; Shellie is a full-time mum and takes Harry to playgroups and soft play centres nearly every day where he runs about like your average toddler.

She said: ‘He still pushed his trains under the couch, he still does everything a normal child does.

‘Children learn through play and he is a bundle of joy.’

Harry’s new favourite thing to do at home is ‘the logo game’ where he has started memorising as many corporate logos as he can, even in the Echo’s video suite he quickly pointed out ‘Samsung’ but admitted his favourite logo was rival ‘Canon’.