A young boy has been filmed screaming in terror as an aggressive magpie repeatedly swoops him while he rides a scooter on a suburban street.

Wayne Sherwood filmed his son Max riding down Shellharbour Road in Wollongong, south of Sydney, as the vicious magpie continuously went for his head.

He posted it to Instagram with the caption: ‘Australia is beautiful but our native birds are killers. They’ll eat your kids alive. Beware.’

In the footage Max can be seen crouching down on his scooter as he zooms down the street.

He posted it to Instagram with the caption: ‘Australia is beautiful but our native birds are killers. They’ll eat your kids alive. Beware’

As the magpie attacks the boy’s head and shoulder Max is screaming and yelling for help from his father, who films and laughs.

The footage was shared by Brown Cardigan on Instagram and has quickly garnered more than 500,000 views.

‘This video perfectly sums up Australia at this time of year it’s f**ked,’ one man commented.

‘Wow this opens some old scars,’ another person said. 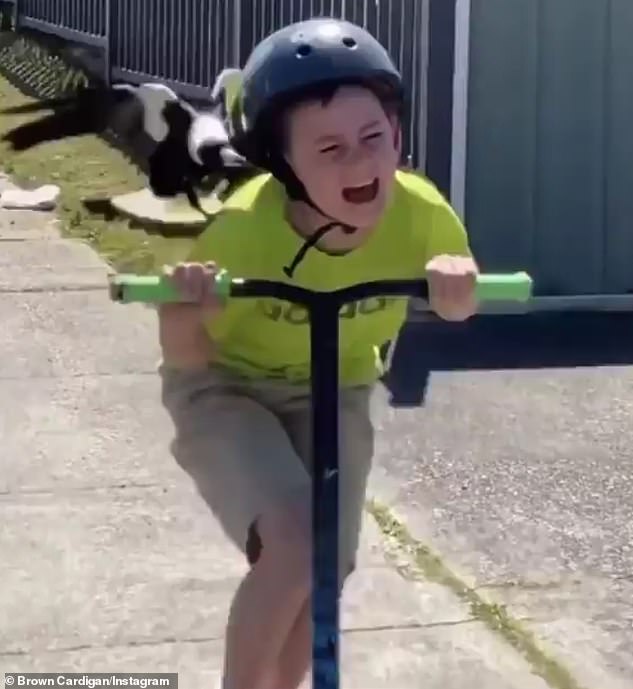 Wayne Sherwood filmed his son Max riding down Shellharbour Road in Wollongong, south of Sydney, as the vicious magpie continuously swooped at his head 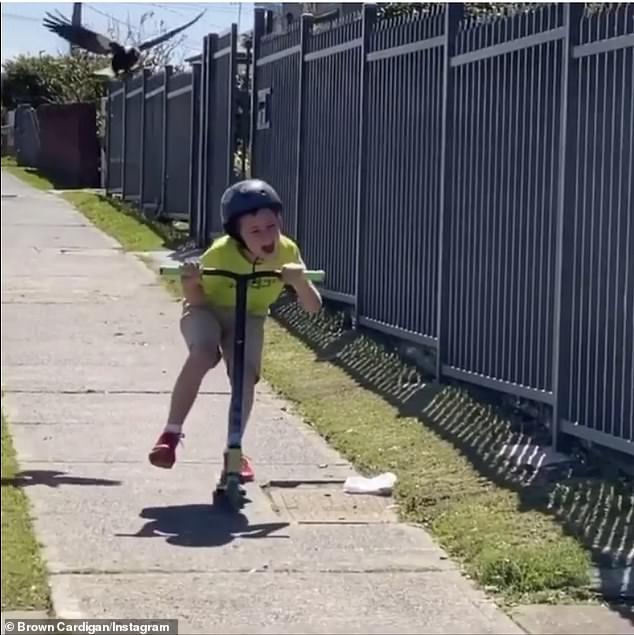 As the magpie attacks the boy’s head and shoulder Max is screaming and yelling for help from his father, who films and laughs

Magpies started their swooping season early this year and there are fears they may be more aggressive as they are threatened by people wearing face masks.

Birdlife Australia’s national public affairs manager, Sean Dooley, said the birds would not be able to recognise people they had previously identified as a friend or threat.

‘A magpie may know you and know that you’re okay, but when you’re wearing a mask they may not be able to recognise you,’ Mr Dooley told 3AW last month.

Mr Dooley claimed magpies could recognise and remember up to 100 individual people through facial recognition.

He explained magpies would not be able to tell people apart and could swoop anyone wearing a mask that they associated with bad experiences.

‘If they’re seeing more than 100 people a day and they can’t work out who is who they will just start to target those types of people.

‘It might be the colour of the mask that makes them go for you,’ Mr Dooley explained.

Magpies will most often swoop when they feel threatened and want to protect the young in their nest.

‘It’s usually a six-week period and they don’t all do it at exactly the same time, so any particular pair might swoop for six weeks between September and November,’ Dr Kelly said explained. 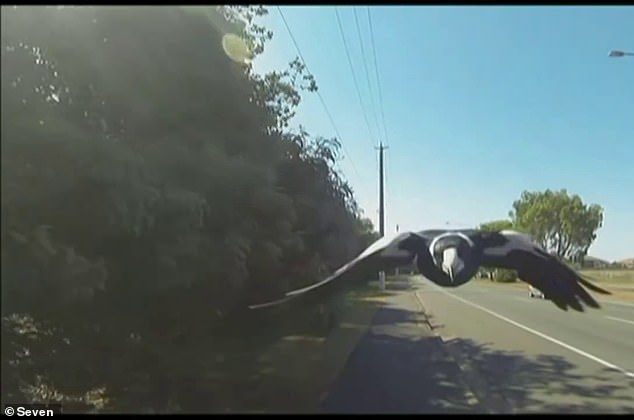 Dr Kelly warned if had you encountered an aggressive magpie in a particular spot it would most likely return to the same location this year.

‘They always go back to the same site so if you had a swooping pair last year you can bet your bottom dollar they’re going to be back again this year,’ she said.

Australians are advised to avoid eye contact and detour around magpie territories whenever possible.

‘If you’re riding a bike have a flag on top, they’ll usually go for the tallest point, you can also have an umbrella if you really need to,’ Dr Kelly said.

The majority of attacks this year have been on cyclists and walkers.

As magpies are native to Australia, those affected by the swooping are not able to take any action which may harm the birds or disturb their nests.

HOW TO AVOID BEING SWOOPED BY A MAGPIE

*If you are swooped while riding, get off of your bike as many injuries are caused in falls during an attack.

*Keep an ear open for their distinctive warble

* Stay still and calm to provoke a further attack.

*Wear sunglasses and large wide-brimmed hat to protect your head and eyes.

*Face the magpie as they tend to attack from behind. Keep facing the bird as you walk out of their territory to avoid be swooped as soon as you look away.