Boy, five, with prosthetic legs walks SIX MILES in 30 days and raises £1m for hospital that saved his life

A five-year-old boy with two prosthetic legs has completed a heroic walking challenge and raised more than £1 million for the NHS hospital that saved his life.

Tony Hudgell had to have both his legs amputated in 2017 as a result of abuse suffered at the hands of his birth parents.

Tony Hudgell, five, from West Malling, Kent, has raised more than £1 million for the Evelina London’s Children’s Hospital in London 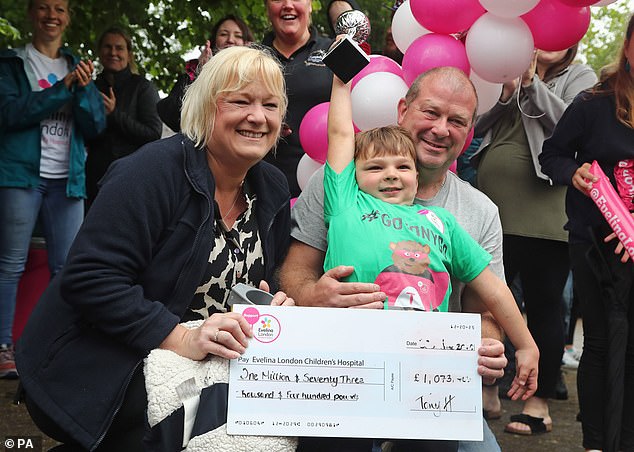 Tony, five, pictured with his adoptive parents Paula left, and Mark, right, suffered abuse at the hands of his birth parents. His legs were so badly damaged surgeons were forced to amputate both of his legs 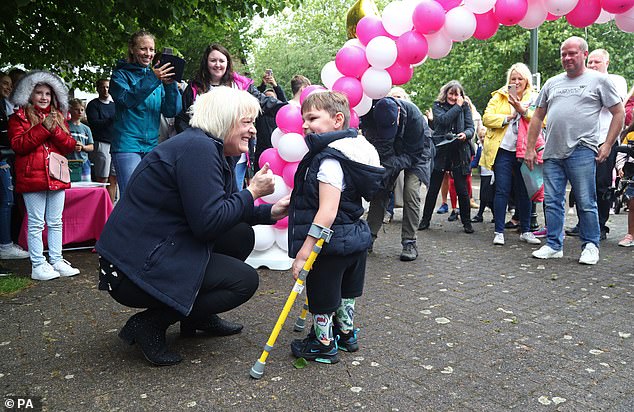 But his incredible efforts captured the hearts of tens of thousands of people, with a staggering £1,073,121 raised for Evelina London Children’s Hospital in just a month.

Tony has had to relearn how to walk on his new prosthetic legs but was determined to follow in the footsteps of his hero Captain Tom Moore.

He hugged his adoptive parents Paula and Mark Hudgell as he crossed the finish line in his home town of West Malling in Kent on Tuesday afternoon after completing his challenge.

They were joined by friends, family and hospital staff to celebrate Tony’s achievement.

Ms Hudgell, 52, said: ‘It is incredible to think that just a few weeks ago Tony could barely take a few steps. He is such a strong and determined boy and we are so proud.

‘We’d like to thank everyone who has been so generous in supporting Tony’s fundraising and we couldn’t be happier that the money is going to a place that is so special to our family.

‘I still can’t get my head around it to be honest, it still doesn’t seem real.

‘I’m just so incredibly proud of him and everything he’s done has just been amazing.’

Tony was greeted with cheers and applause as he passed through the balloon arch finish line on Tuesday. 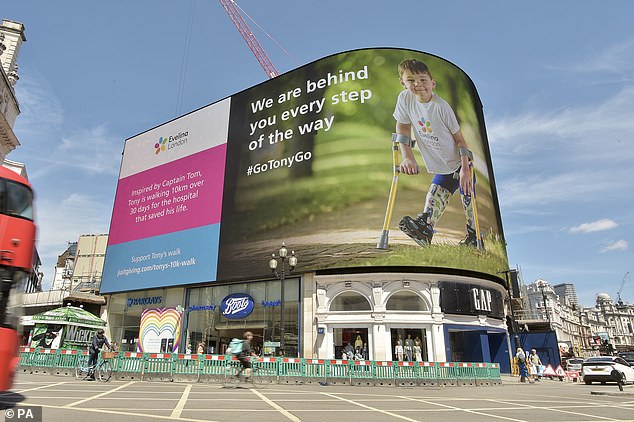 Tony’s dedication saw him beam down from Picadilly Circus in London, pictured 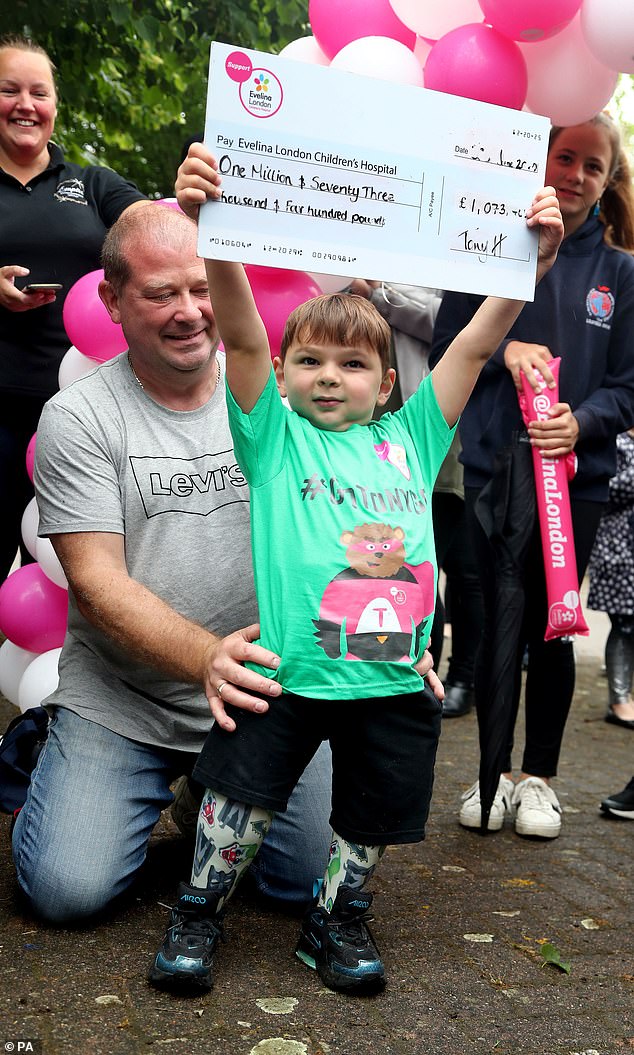 Tony, pictured, had to learn how to walk with his new prosthetic legs

Cat Flanagan, one of Tony’s nurses at Evelina Hospital, said: ‘Ever since he was a very little boy he has captured all of us in his heart.

‘His achievement is amazing just from a personal point of view, his walking is so much improved.

‘Now he’s walking so well and just the achievement for the hospital is incredible.’

Tony was inspired to take on the challenge after seeing fellow fundraiser Captain Tom on television and recently received a video message from Captain Tom himself, congratulating him on his achievement.

Caroline Gormley, associate director of fundraising at Evelina London, said: ‘We’d like to wish Tony and his family a huge congratulations on this incredible achievement. Tony is a true inspiration.

‘It was a joy to see Tony take the final steps of his challenge with a cheeky smile on his face.

‘The money raised will help us to support children with complex needs, like Tony, across the region to ensure that all children in our care can live their best lives, today and tomorrow – from small steps, like making sure that the environment where they receive care is extra special so that children and families feel safe and happy, to big leaps like funding research, new facilities and cutting-edge technology.’ 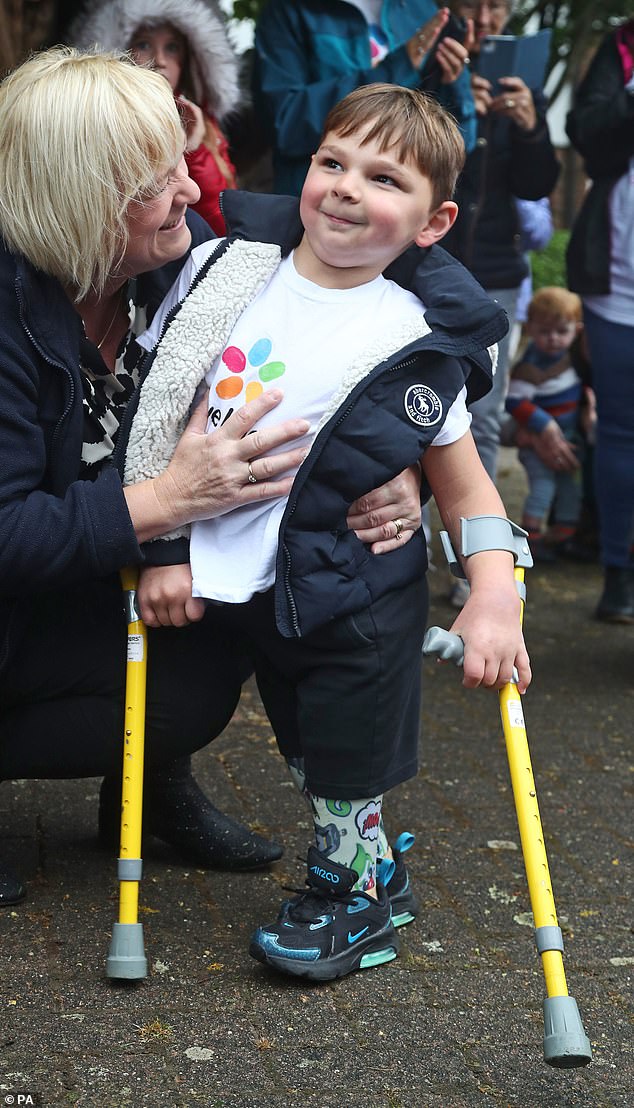 Caroline Gormley, associate director of fundraising at Evelina London, said: ‘We’d like to wish Tony and his family a huge congratulations on this incredible achievement. Tony is a true inspiration’