Tyre Sampson, pictured, fell to his death from world’s tallest drop ride in Orlando on March 24

A 14-year-old boy who fell to his death from a 430ft ride at a theme park was sitting in a seat where the sensors had been manually adjusted, an investigation has found.

Tyre Sampson, from St Louis, Missouri, slipped out of the towering Free Fall at ICON in Orlando, Florida, during a visit with his friends and family.

He plummeted to his death from the ride – the world’s tallest free-standing drop tower – during the horrific incident on March 24.

Now investigators have revealed the safety sensors had been manually modified to leave a larger gap between the seat and the harness before he fell.

The youngster’s devastated parents said through their lawyers yesterday they were likely to bring legal action.

Forensic engineers said Sampson had slid out of the harness feet first, sliding over the seat horn that sat between his legs.

The gap between his harness and the top of the seat horn was 6-7 inches, they found, when other seats had a gap averaging 3.33 inches.

State-of-the-art sensors monitoring the three-month-old ride would normally have alerted operators to the fact the gap was abnormally large.

But they had been modified before Sampson’s ride to approve the seat’s closure, despite the wide gap. It is not clear when the adjustments were made or who by. 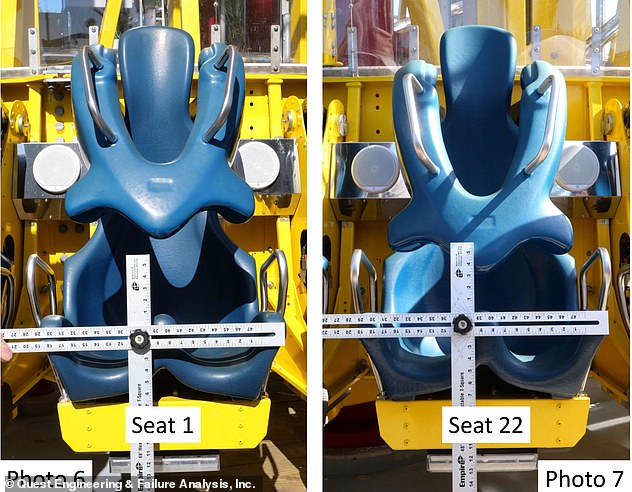 Sampson was sitting in seat one, where the gap between the seat horn and the bottom of the harness was 6-7 inches. The rest of the seats (pictured right) had only an average of 3.33 inch gap 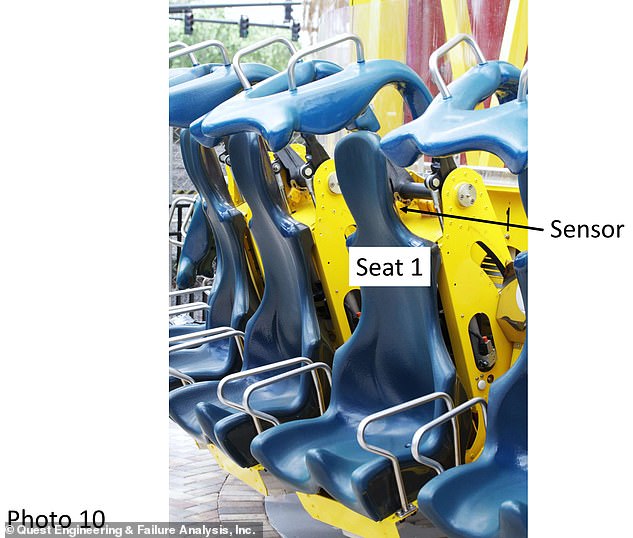 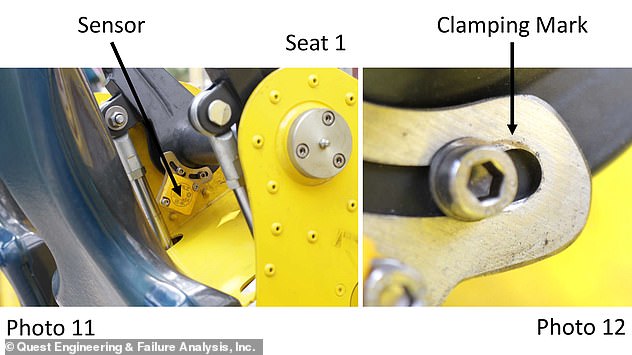 The seat had been manually adjusted, and the sensor tweaked to accept the adjustment 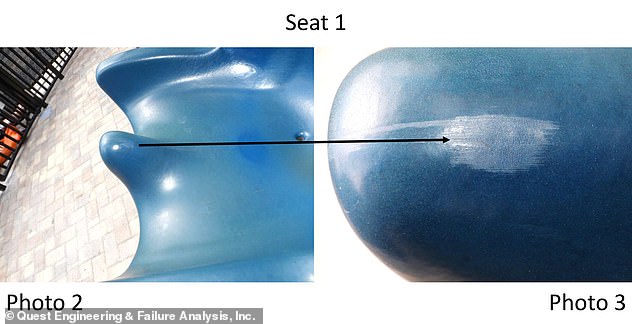 Rep Geraldine Thompson said the adjustments were ‘presumably to allow for larger riders, which should not have happened based on the manufacturer’s guidelines’.

Sampson was 6ft 5in and 340lbs, his father Yarnell said, but the ride’s operation manual said the maximum weight of riders was 286lbs.

The engineers did not address the question of whether he should have been allowed on the rollercoaster.

The investigators found the ride ‘did not experience a mechanical or electrical failure’.

The harness was ‘still in a down and locked position when the ride stopped,’ a previous report said. Instead they said the settings were manually over-ridden.

They said: ‘The cause of the subject accident was that Tyre Sampson was not properly secured in the seat primarily due to mis-adjustment of the harness proximity sensor.

‘The mis-adjustment of the sensor allowed both safety lights to illuminate, improperly satisfying the ride’s electronic safety mechanisms and allowing the ride to commence even though the ride was unsafe.’

Florida Commissioner of Agriculture and Consumer Services Nikki Fried said: ‘This report confirmed our department’s findings that an operator of the Orlando drop tower made manual adjustments to the ride, resulting in it being unsafe.’ 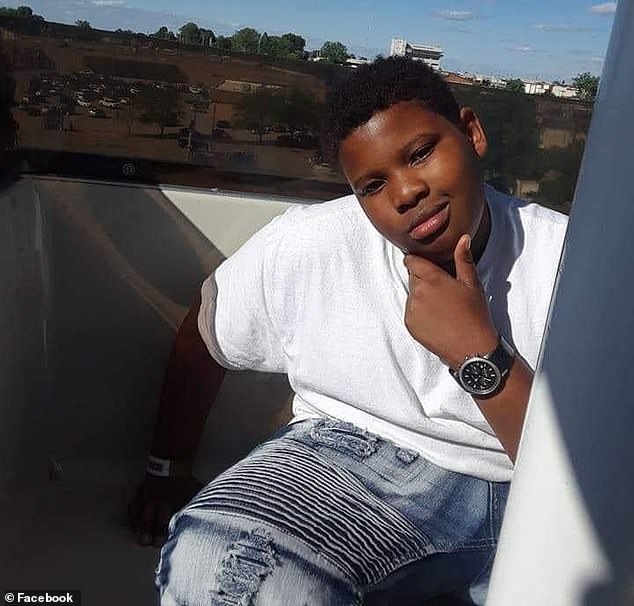 Sampson, 14, was a rising star on the middle school football player. Despite his young age, he was 6 ft 5′ and weighed around 340lbs, his father said. He fell to his death on March 24 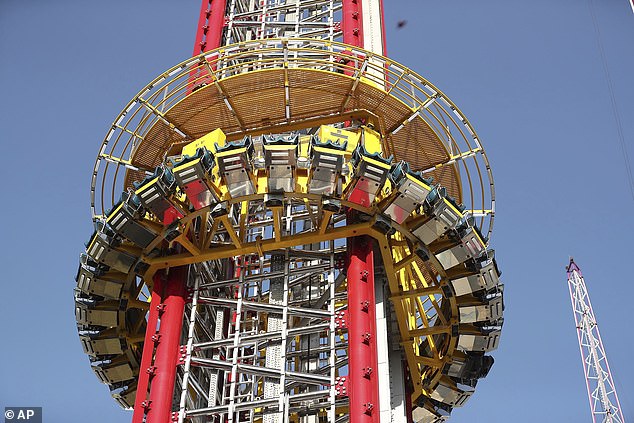 A preliminary accident report revealed that Sampson’s seat was locked: on Monday, a more detailed report concluded that the gap between the seat horn and the harness was abnormally wide

Michael Haggard said: ‘He was the sweetest kid that ever attended any class, and she wants this just never to happen to the next sweet kid.

‘[It] just makes it more real that someone really manipulated the ride which caused her son to die.

He said Sampson’s devastated mother would be filing a lawsuit in the coming weeks over the incident.

He added: ‘They decided to tilt it forward, they decided to have no other safety precautions but the harness, and then that night there’s no signs about weight, nobody checked his weight.’ 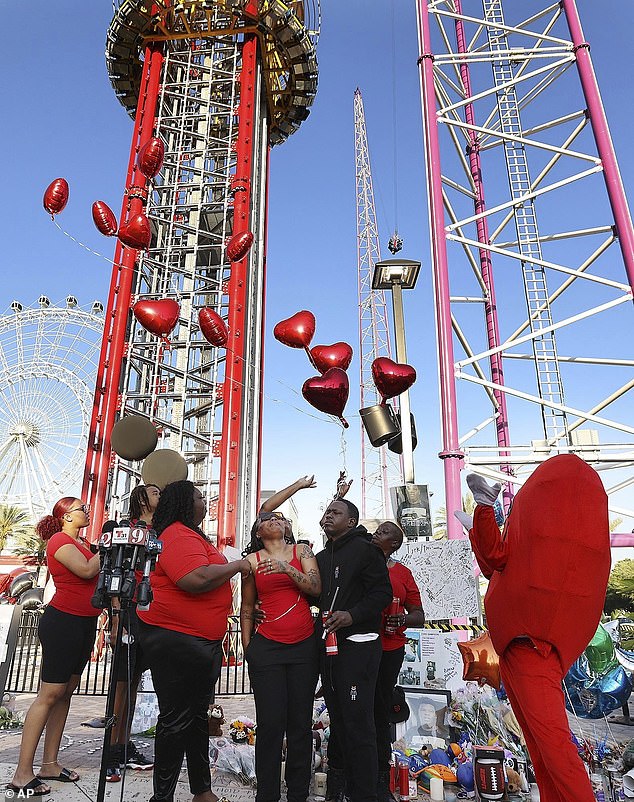 Free fall saw 30 passengers rise up the world’s tallest free-standing drop tower to a height of 430 feet before tilting forward and plunging 400ft at 75mph.

State officials said yesterday that the attraction would remain closed indefinitely in the wake of Sampson’s death.

Attorney Trevor Arnold, for Orlando Slingshot, which owns the ride, said they followed ‘protocols, procedures and safety measures provided’ by the manufacturer.

He said yesterday: ‘Today’s report suggests a full review of the ride’s design, safety, operation, restraint mechanisms and history – which of course we welcome.’

A spokesman for ICON Park said: ‘We are deeply troubled that the preliminary findings of the State’s investigation indicate a sensor on the Orlando FreeFall attraction, which is owned and operated by the SlingShot Group, had been mis-adjusted after the sensor was originally secured in place,’ the park said in a statement.

‘ICON Park is committed to providing a safe, fun experience for families. We will continue to support the Florida Department of Agriculture and Consumer Services with their ongoing investigation.’