The boss of Britain’s biggest building society has hit out at demutualisations as he waded into the row over the sale of LV.

Nationwide chief executive Joe Garner said he was ‘pretty clear on what the better route is’ as he listed businesses which suffered after losing mutual status.

In a note of caution over the planned sale of LV, he pointed to the crises at firms from Northern Rock to Halifax after they followed a similar route.

Speaking out: Nationwide chief executive Joe Garner said he was ‘pretty clear on what the better route is’ as he listed businesses which suffered after losing mutual status

It came as LV bosses battle to convince members to back their plan to sell the 178-year-old life insurer to US private equity outfit Bain Capital.

Members have complained that they trusted LV with their money because it was a mutual – meaning it is owned by members and run for their benefit.

The deal has also been criticised by politicians from all parties including Tory grandee Lord Heseltine and former Labour leader Ed Miliband.

It is feared that it would mean LV charges rise and service slip as Bain pursued a healthy profit. Garner said: ‘What happens with LV is a matter for its board and its members. But talking more broadly about mutuals – John Lewis, LV, Nationwide – mutuals are run and owned by their members. That typically leads to better service and value.

‘But there’s another difference which underpins that, which is not about how much profit they make but what happens with that profit. With a mutual, that money stays in the entity and can be redeployed for the benefit of the members. So you can extrapolate from those comments what we might think.’

While LV has its roots in Liverpool, where it offered ‘penny policies’ to help the poor to bury their dead with dignity, Nationwide began in London. It opened its doors in 1884, and helped families migrating to the city to pool their savings and buy a home.

LV bosses insist it desperately needs an investor to fund future expansion and modernise its technology. They said Bain’s offer was the best ‘financial outcome’.

But amid calls for greater transparency from LV, critics have questioned whether the deal is better for members than rival offers – especially a bid from fellow mutual Royal London, whose boss, Barry O’Dwyer, has urged LV to reopen talks, that would allow it to remain a mutual.

Garner said: ‘If you look back, lots of building societies demutualised. Nationwide went to the vote and voted 52 per cent to 48 per cent to remain a mutual.

‘I think we’re pretty clear on what the better route is.’

Garner spoke of the virtues of mutual ownership as Nationwide posted bumper half-year profits of £853m, up from £361m over the same period last year.

He vowed that the money would be spent on improving services for customers, such as by offering better savings rates.

The results were boosted by its decision to release £34m it had set aside to cover loan losses if Covid caused debts to turn sour.

During the same period last year, it took a £139m provision.

Garner has been criticised for his pay which totalled £2.37m in 2019 – small in comparison to bank bosses but high for a mutual. For the past two years he has pocketed around £1.2m after taking pay cuts in the pandemic.

His pay is now the same as that of LV chief executive Mark Hartigan, despite the fact that LV is a much smaller business. 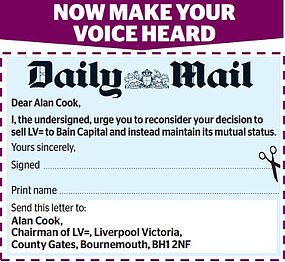