Kenny WIlson says his lifelong love of Dr Martens began in the 1970s during an episode of Top Of The Pops. From his living room in Aberdeen, the teenager watched Terry Hall, lead singer of ska band The Specials, wearing the iconic black boots during a performance.

‘I saw him wearing them and I thought: I want them,’ he says. Soon after, he dashed to his local shoe store to pick up his first pair.

Now 55 and chief executive of Dr Martens since 2018, Wilson looks momentarily panicked when asked how many pairs he currently owns. ‘I don’t know is the honest answer,’ he admits. ‘But my oldest pair is 24 years old.’

Wilson’s story will be familiar to many loyal fans who treasure their old ‘Docs’ as a rite of passage from their youth. Even though teenagers nowadays may not remember them as the clothing of choice for skinheads and the underground punk music scene, Wilson insists they are still a badge of rebellion here and elsewhere in the world.

‘People always use the punk reference. That is not necessarily relevant to somebody who’s 18. But I think rebellious self-expression and being an individual, standing up for what you believe in, is still a unifying concept,’ he says.

‘I could argue that [climate activist] Greta Thunberg is an individual because she was willing to go and be the first person to sit on the steps outside Parliament. It isn’t about being anti-authority, but it’s having the courage to stand up for what you believe in.’

Wilson believes the FTSE250 company’s success boils down to the universal appeal of its core styles – known as ‘silhouettes’. The best known is the familiar 1460 lace-up boot, named for the day, month and year it was launched – April 1, 1960. Retailing at £149 a pair, they are not cheap.

Surely the cost-of-living crisis puts the company at a major disadvantage as customers grapple with soaring bills and rising prices?

The quality of Docs and the fact they are seen as an investment, according to Wilson, is exactly what will get them through the crisis.

‘So if I can only afford to buy one pair of boots, I’ll buy something that I know is going to last me, I won’t buy a fashion product.

‘And when you buy a brand that’s an iconic style like the Levi’s 501 jeans or Docs, they’re going to look as relevant in three years’ time as now,’ he says.

Many veteran owners are still incensed that a former ‘for life’ repair or replace policy was scrapped before Wilson joined in 2018 and has not been reinstated.

But the shoes are famously durable and the company is now working with second-hand clothing marketplace Depop and the Boot Repair Co to repair and resell Docs as demand for refurbished fashion surges. Wilson believes refurbished or secondhand boots could account for as much as 15 per cent of sales in ten years’ time. Although Wilson is now in the rarefied ranks of FTSE bosses, his insight into consumer spending is much more grounded in experience than most of his peers. The married father of one, whose daughter now works at the company, spent the first few years of his life in an Aberdeen council high rise before his own dad got a better job and moved them into private housing.

Wilson was the first in his family to go to university, studying English, then began his career at K Shoes, a division of Clarks. 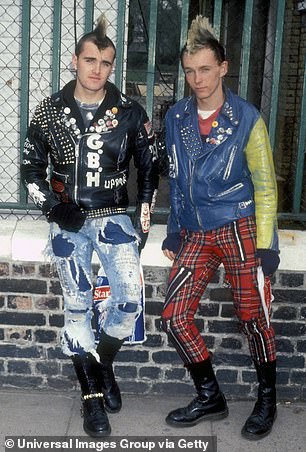 Anarchy in the UK: How the boots were worn by punks

He has since moved through a series of eponymous companies, going from Levi’s to fashion accessories chain Claire’s and later Cath Kidston before Dr Martens.

The company has a long history in the UK. The boots were launched by German entrepreneur Dr Klaus Martens in the 1940s and first appeared in British shops in 1960. The Griggs family bought the patent rights, then sold the company to private equity group Permira in 2013 for £300million.

In 2018, it headhunted Wilson, who was tasked with turning it into a worldwide brand and later taking it to the stock market. In January 2021, he steered it through a blockbuster float that valued the bootmaker at £3.7billion.

Shares rocketed for several months, jumping from their listing price of £3. 70 to as much as £5.05.

But it has gone through the same turmoil as others that floated in 2021. Is he concerned the shares – and presumably investor confidence – have struggled to shine?

‘I don’t worry about it,’ he says. ‘And I mean that’s genuinely true. Worrying about things that are out of your control is futile, it wastes energy and it wastes time.’

A confident set of results this month helped lift the stock price – Dr Martens reported selling more boots than ever before in 2021.

Profit almost quadrupled to £214million and revenue growth forecasts were raised to the ‘high teens’ for the current financial year. Investec analysts said the year had been ‘executed beautifully’ and was testimony to the power of its strategy.

But the shares are still lagging at £2.43, which means the company is valued at £2.4billion.

For these efforts, he was paid £1.7million, according to the annual report published last week.

Despite being the frontman responsible for wooing the City, Wilson is adamant that his pay arrangements are out of his control – instead decided by the rest of the board.

‘I’m paid to deliver performance,’ he says. ‘So we’ll do exactly what we said we would when we floated the company. We’re long-term custodians of this brand.

‘I think you have just got to be realistic that when you’re new to the market, it takes time for people to understand your story.

‘But for any investors,’ he says, ‘the most important thing is delivering results.’