Boris Johnson has mapped out a blueprint to loosen the lockdown which will reopen rubbish tips this weekend followed by garden centres within a fortnight, sources claimed last night.

Council recycling centres could be allowed to open in a matter of days if the police give the green light they can cope with the expected rush of people looking to dump six weeks of waste.

As well as a steady reopening of services which have been shuttered by the coronavirus crisis, ministers are also drawing up plans to fire up Britain’s railways as more of the nation’s workforce is allowed to return.

Public transport routes have been operating a significantly cut-back timetable and officials are reportedly mulling how to expand services while maintaining social distancing.

Passengers will likely be instructed to fashion a homemade mask while floor markings will enforce a two-metre separation rule, a source familiar to the high-level discussions told the Daily Telegraph.

The government’s plan will steadily adjust the public to life under a ‘new normal’ which will juggle the need to rescue the economy while observing social distancing.

The Prime Minister, who completed his first day back in charge at Number 10, yesterday said the country was emerging from the first phase of the epidemic, in a speech with echoes of his political hero Winston Churchill. 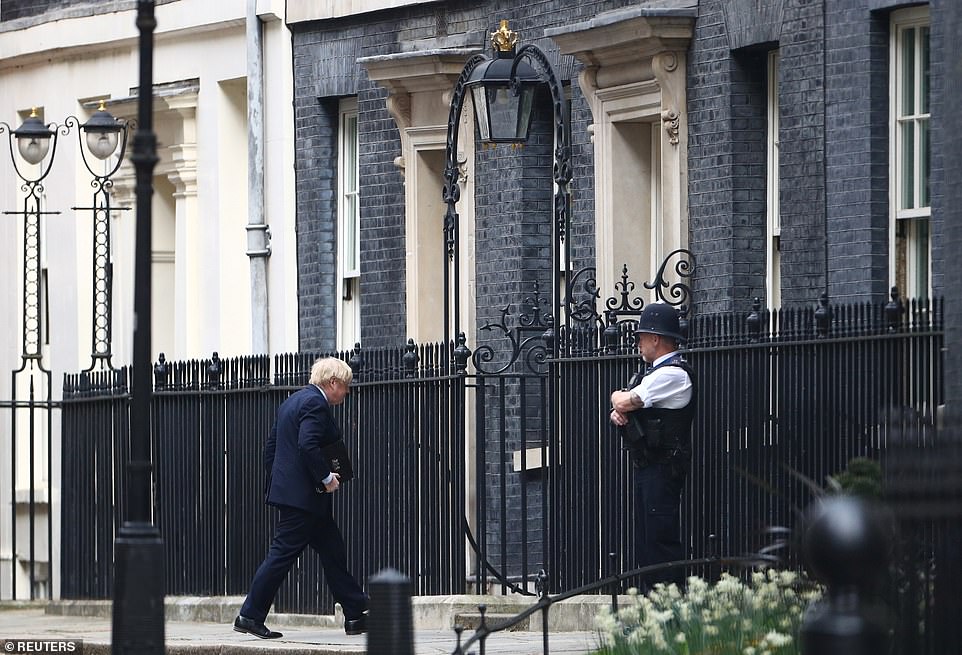 Mr Johnson took to the steps of Downing Street to warn the public that while the UK was passing through the first coronavirus peak, ‘now is the moment of maximum risk’

Back at the helm after three weeks recovering from his own battle with the virus, Mr Johnson was on top form as he chaired meetings with his most senior ministers.

The 55-year-old premier ditched Zoom despite appeals from advisers to avoid appearing in person and walked confidently into a packed cabinet room for his 9.15am meeting.

Social distancing rules were ‘pushed to the limit’, with so many ministers back at Number 10, according to The Times.

During Mr Johnson’s absence, his de facto deputy Dominic Raab has remained tight-lipped over an exit strategy out lockdown.

But reports from insiders last night suggested a plan had been fleshed out for the country to take baby steps out of lockdown.

Of one of the most eye-catching plans to insist on masks, a Whitehall source told the Telegraph: ‘The plan for masks will be more than a recom- mendation. It is more of a compulsion for them to be worn in shops and on public transport.

‘On social distancing, transport bosses will need to have two-metre markers in place so people can safely keep their distance.’ 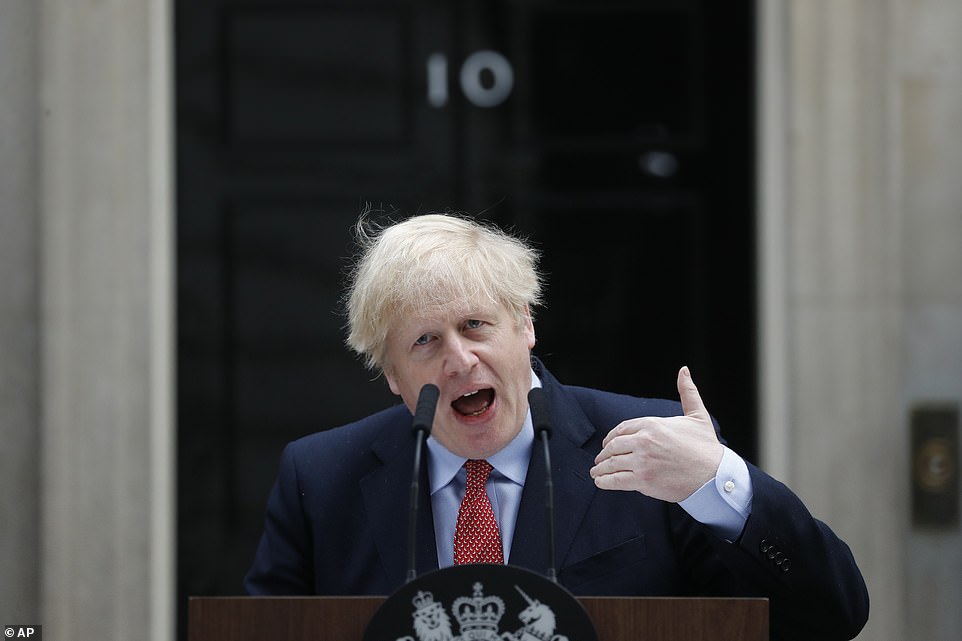 In a statement in Downing Street, the PM assured the country he is back in charge after weeks recuperating from a serious scare with the killer disease

In his first public appearance since he was hospitalised with coronavirus, Mr Johnson said he had been ‘away from my desk for much longer than I would’ve liked’.

Addressing the nation he said: ‘Once again I want to thank you the people of this country for the sheer grit and guts you’ve shown and are continuing to show.

‘Every day I know that this virus brings new sadness and mourning to households across the land.’

Mr Johnson said: ‘It is still true that this is the biggest single challenge this country has faced since the war and I in no way minimise the continuing problems we face.

‘And yet it is also true that we are making progress with fewer hospital admissions, fewer Covid patients in ICU and real signs now that we are passing through the peak.

‘And thanks to your forbearance, your good sense your altruism, your spirit of community, thanks to our collective national resolve, we are on the brink of achieving that first clear mission to prevent our National Health Service from being overwhelmed in a way that tragically we have seen elsewhere.

‘And that is how and why we are now beginning to turn the tide.’

Mr Johnson, drawing on his own battle with Covid-19 which put him in intensive care, said: ‘If this virus were a physical assailant, an unexpected and invisible mugger – which I can tell you from personal experience, it is – then this is the moment when we have begun together to wrestle it to the floor.

‘I know there will be many people looking at our apparent success, and beginning to wonder whether now is the time to go easy on those social distancing measures.’

He said he understood ‘how hard and stressful it has been to give up, even temporarily, those ancient and basic freedoms’.

But he said the potential of a second spike in cases risked ‘economic disaster’.

Mr Johnson added: ‘And so I know it is tough. And I want to get this economy moving as fast as I can, but I refuse to throw away all the effort and the sacrifice of the British people and to risk a second major outbreak and huge loss of life and the overwhelming of the NHS.’

Mr Johnson’s words about the end of the first phase evoked Churchill’s famous 1942 speech after the Allies defeated Rommel’s forces at El Alamein.

The wartime PM said: ‘This is not the end. It is not even the beginning of the end. but it is, perhaps, the end of the beginning.’

It is understood Mr Johnson’s pregnant fiancee Carrie Symonds, who was with him at Chequers during his recuperation, has also moved back into Downing Street. She has also recovered from coronavirus.

Mr Johnson has returned to work ‘full time’, taking back all of the responsibilities handed over to Dominic Raab, Downing Street said.

The Prime Minister’s official spokesman said: ‘He’s back full time. In terms of responsibilities and duties, he will be doing all of those.’

Mr Johnson is expected to chair Cabinet on Thursday, but the plan for PMQs is not yet clear.

The PM’s official spokesman said he would be speaking to Sir Keir Starmer soon to discuss the way forward – although the idea of a government of national unity has been dismissed.

‘He plans to speak with the leader of the Opposition this week and the leaders of all the Westminster parties next week, hopefully alongside the chief medical officer and the chief scientific adviser,’ the spokesman said.

Allies have suggested the premier is ready to act earlier than May 7 to get UK plc up and running again, with hints the blanket ‘stay at home’ message from Whitehall will be ditched in favour of a more nuanced stance stressing the public should work where possiblePhotographs taken during rush hour showed queues building up on London roads including the A40 at Perivale and the A102 at Greenwich, while the M5 in Bristol and the M6 in Walsall were also busy with cars, vans and lorries.