Boris Johnson will hail a new chapter in Britain’s history today as his EU trade deal goes before Parliament.

On the eve of the landmark vote, Tory Eurosceptics announced they would support the agreement, finally ending decades of division in the party over Europe.

Their move paves the way for the legislation to be rushed through the Commons and Lords in just one day, ahead of the end of the transition period at 11pm tomorrow.

Urging MPs to back the accord struck on Christmas Eve, Mr Johnson will claim it resolves ‘the old and vexed question of Britain’s political relations with Europe, which bedevilled our post-war history’.

Urging MPs to back the accord struck on Christmas Eve, Mr Johnson (pictured) will claim it resolves ‘the old and vexed question of Britain’s political relations with Europe, which bedevilled our post-war history’

MPs and Peers have been recalled from their Christmas break for today’s one-day sitting to rubber-stamp the trade deal.

The Commons is expected to spend five hours scrutinising the 80-page EU (Future Relationship) Bill from 9.30am, before the Upper House sits late into the evening.

The Queen will be on standby at Windsor Castle, where she is expected to give royal assent shortly before midnight. She may have to stay up until the early hours if the debate in the Lords drags on.

At the same time as the votes are held in Parliament, the deal will be signed by Brussels chiefs before being flown by an RAF plane to London for Mr Johnson to add his name to what is an international treaty. The European Parliament has begun its scrutiny of the agreement but will not get a chance to ratify it until after it comes into effect at 11pm tomorrow.

It has however been given the unanimous backing of ambassadors from the 27 EU nations – and the member states yesterday gave their written approval. In his Commons speech, Mr Johnson will pledge the UK will be a ‘friendly neighbour’ to the EU, with whom it will work ‘hand in glove’ when its values and interests coincide.

He will add: ‘We have pressed ahead with this task, resisting all calls for delay, precisely because creating certainty about our future provides the best chance of beating Covid and bouncing back even more strongly next year.’ 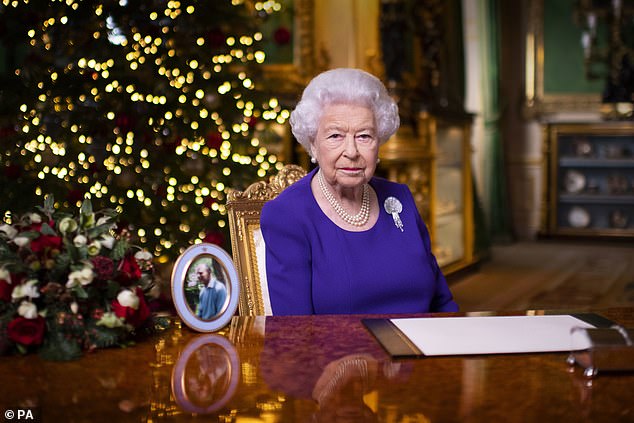 The Queen (pictured) will be on standby at Windsor Castle, where she is expected to give royal assent shortly before midnight. She may have to stay up until the early hours if the debate in the Lords drags on

A self-styled ‘star chamber’ of lawyers – led by Bill Cash – was assembled to examine the 1,246-page text of the agreement.

They concluded that it preserved ‘the UK’s sovereignty as a matter of law and fully respects the norms of international sovereign-to-sovereign treaties’.

The ERG said: ‘The “level playing field” clauses go further than in comparable trade agreements, but their impact on the practical exercise of sovereignty is likely to be limited if addressed by a robust government.

‘In any event they do not prevent the UK from changing its laws as it sees fit at a risk of tariff countermeasures, and if those were unacceptable the agreement could be terminated on 12 months’ notice.’ The ERG’s legal advisory committee included Sir Bill, Martin Howe QC, Barnabas Reynolds, Christopher Howarth, Emily Law and Tory MP David Jones.

Their backing will be welcomed by the Prime Minister but the Bill was likely to pass because Labour leader Keir Starmer has urged his MPs to vote in favour. 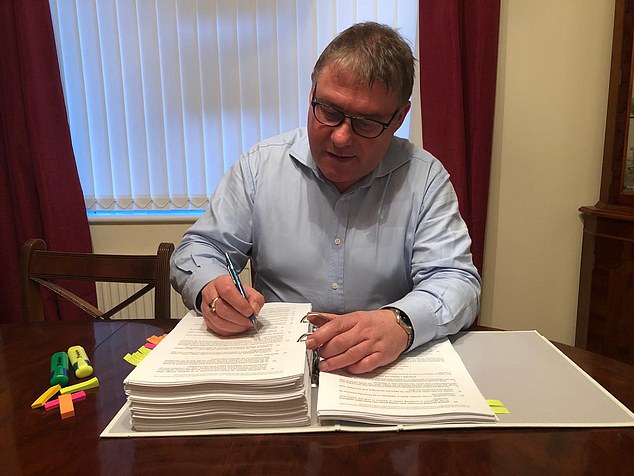 The ERG said: ‘The “level playing field” clauses go further than in comparable trade agreements, but their impact on the practical exercise of sovereignty is likely to be limited if addressed by a robust government.’ Pictured: ERG chairman Mark Francois studying the deal

The SNP, Plaid Cymru, the DUP, the SDLP, Alliance and the Liberal Democrats have all indicated that they are opposed.

Labour peers are expected to pass a ‘motion of regret’, putting on record their dissent. Some 84 MPs are due to speak in the Commons debate, including former prime minister Theresa May.

Dozens of Labour MPs are set to defy Sir Keir’s orders. Former shadow chancellor John McDonnell, Clive Lewis and Ben Bradshaw have accused him of ‘falling into the trap of rallying around this rotten deal’.

Sir Keir dismissed the agreement as ‘thin’, saying it would not underpin workers’ rights or adequately protect sectors such as manufacturing and the creative industries.

But he insisted that a No Deal exit from the transition period was now the only other realistic possibility.

‘A better deal could have been negotiated. But I accept that option has now gone,’ he said. 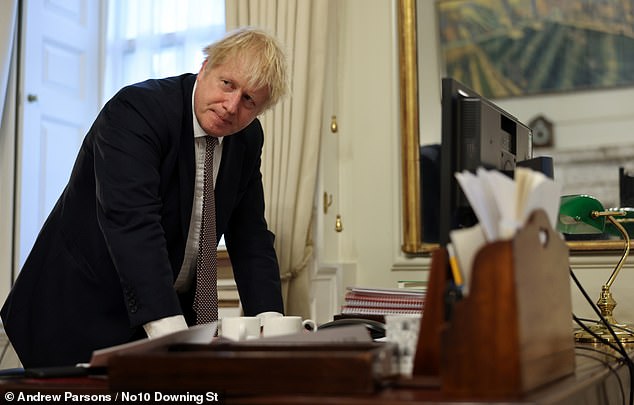 In his Commons speech, Mr Johnson (pictured) will pledge the UK will be a ‘friendly neighbour’ to the EU, with whom it will work ‘hand in glove’ when its values and interests coincide

Shadow Cabinet members – including the Shadow Chancellor Anneliese Dodds, the shadow chief secretary to the Treasury Bridget Phillipson, and the shadow international trade secretary Emily Thornberry – are known to have expressed concerns about the idea of supporting the deal. But they are expected to abide by collective responsibility.

The SNP’s Nicola Sturgeon said: ‘While recognising the UK would leave the EU, we proposed staying in the single market and customs union. The UK Government dismissed these ideas. It disregarded Scotland’s views, values and interests. It has agreed a deal which is disastrous for Scotland.’

Shares in London rose to their highest levels since the early days of the coronavirus crisis yesterday. On the first day of trading since the Christmas break, the FTSE 100 index closed up 1.55 per cent, or 100.54 points, at 6602.65. That was its highest level since March.

In total, £34billion was added to value of UK shares amid hopes the trade agreement and the roll-out of Covid vaccines will jolt the economy back into life in 2021.

Fund manager George Godber, of Polar Capital, said: ‘We should see some relief coming through as a result of the Brexit announcement. Whatever people think of the deal it is infinitely better than No Deal.’

In Switzerland, Hans-Peter Portmann of the country’s centre-Right Radical-Liberal Party said his government must ‘include the Brexit deal in the next talks with the EU in January and not go below the level that Britain has now’. 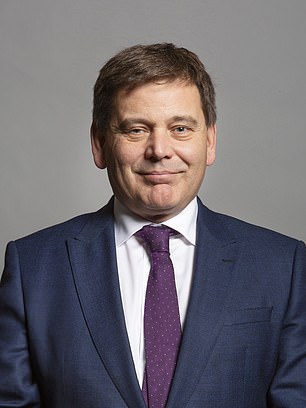 The hour of freedom approaches. The moment of destiny is almost here. In just two days, Britain will once again take its place on the global stage as an independent nation.

That inspirational reality was fulfilled last week by the impressive Brexit trade deal negotiated by the British Government and the EU, heralding a new era of free co-operation in place of the former dominance by Brussels.

It was the cause of Euroscepticism that first led to my involvement in politics 20 years ago, when I joined the group Business For Sterling to campaign against Britain’s membership of the single currency, then an enthusiasm of Tony Blair’s. And as a member of the European Research Group (ERG) in Parliament – which consists of Eurosceptic MPs – I wouldn’t back anything undermining our independence.

But I’m satisfied the deal reached by the Prime Minister and his chief negotiator Lord Frost fully achieves the goal of Brexit. Since the welcome news of the breakthrough on Christmas Eve, I’ve seen nothing in the small print of real concern, though I would have preferred Parliament to have more time to scrutinise it.

Even so, it does not appear there are any nasty traps in the document. Indeed, I’m tremendously reassured by the verdict yesterday of the ERG Star Chamber – made up of the incisive minds of the ex-Cabinet minister David Jones, the lawyer Martin Howe and the veteran expert Sir Bill Cash – which stated that the deal is ‘consistent with UK sovereignty’.

In practice, Britain has everything it wants. From January, our country will decide its own laws, fix its own immigration rules, conclude its own international trade agreements, set its own taxes and make its own social policies. We are truly about to ‘take back control’, to quote the slogan of the Leave campaign.

Free movement will end, as will the jurisdiction of the European courts and the vast contributions to Brussels’ coffers. If you had offered me such a deal even before the Brexit campaign began, I would have bitten off not just your hands, but your arms and legs as well. 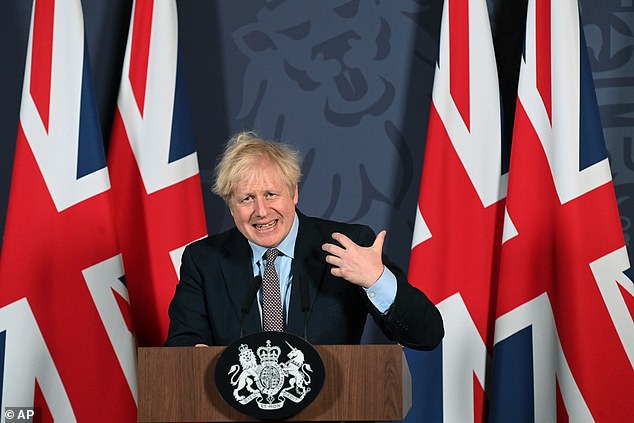 One of the beauties of the deal is a four-year break clause allowing a full review of its operation. Either side can walk away if they’re unhappy.

But the EU will be only too grateful for any future trading relationship with Britain as the bloc’s share of the global economy diminishes. In contrast, freed from the shackles of the EU’s bureaucratic regulation, Britain will flourish, exploiting our advantages of a flexible labour market, a world lead in innovation (in artificial intelligence and digital technology), the gift of the English language and our cultural power.

We could, for instance, create a free trade area with Canada, Australia and New Zealand based on our shared heritage and head of state.

In the final negotiations, the biggest obstacle was fishing rights, since control of our waters is a symbol of nationhood. But here, too, I am satisfied – although the gradual cut in EU quotas is smaller than we had hoped.

The terms give us nine months’ notice to depart the fisheries accord, while the transition period of five and a half years will provide time to rebuild coastal communities. 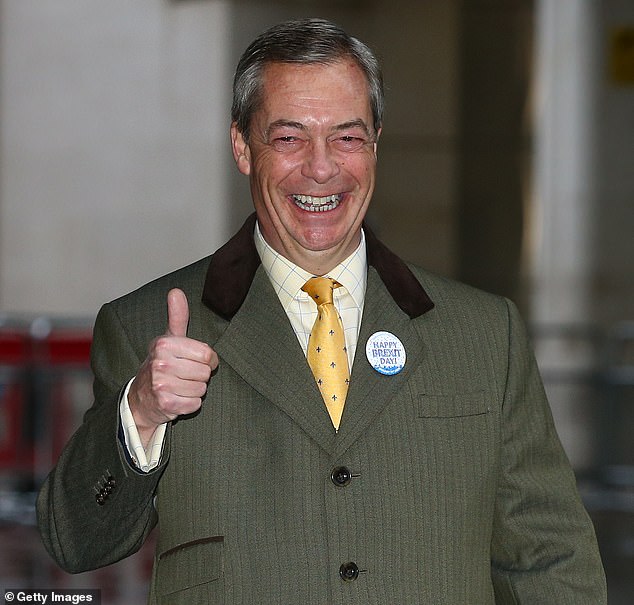 ‘We were sustained by certain factors. First, the role of the Brexit Party led by Nigel Farage, who was ready to seize on any retreat,’ said Andrew Bridgen

Overall, Lord Frost and his team did a superb job, but they couldn’t have managed it without the firm leadership of Boris Johnson, who set out his red lines and refused to cross them. That was in dramatic contrast to his predecessor Theresa May, whose disastrous Chequers proposal in July 2018 would have reduced Britain to a vassal state, more restrictive than EU membership.

Her submissive approach – a Brexit in name only – not only dealt Boris Johnson and Lord Frost a difficult hand when they took over, but also justified the opposition of the ERG.

We were determined not to surrender to siren calls for compromise. There were moments when, to quote the Duke of Wellington about Waterloo, ‘it was a damned close-run thing’, particularly during the third meaningful vote when it looked as if our band of 28 might be overwhelmed.

But we were sustained by certain factors. First, the role of the Brexit Party led by Nigel Farage, who was ready to seize on any retreat.

The second was the arrogance of Remain MPs. They had the numbers for a soft, meaningless Brexit, but overplayed their hand in of their eagerness to overturn the result.

The comprehensive nature of their defeat is illustrated by the fact that today, it is the Eurosceptics who will be voting for a sensible EU trade deal, while the hardline Europhiles – including Labour rebels, the SNP and Liberal Democrats – will be going through intellectual contortions to rationalise their opposition. They’re like Japanese soldiers in the jungle, still engaged in a futile fight after the war has been lost.

However, the greatest source of strength for the Brexit cause was the British people, who never wavered in their belief that the 2016 vote must be properly enacted. In the face of Remain hysteria they stood firm. Now, with the arrival of independence, they have their reward.