The Prime Minister is ‘bouncing’ Rishi Sunak into ensuring money from the furlough scheme is available across the country once the national lockdown comes to an end.

The Chancellor is being pressured into carrying out the commitment in order for England, Scotland, Wales and Northern Ireland to receive the funds amid the country’s ongoing economic struggles, it has been claimed.

It comes just days after the Prime Minister pledged to extend the Government’s  furlough payments throughout November and into December.

An ally of Mr Sunak told The Times that the Chancellor had been ‘bounced’ into making a commitment that would allow any part of the country to receive furlough money.

They told The Times: ‘It has huge consequences, both for England and the Union.’

Sources said that while the details were still being refined, the Chancellor wanted the ‘mechanics ironed out’ before it was brought to the public.

Another government source told the paper: ‘If regions have to go into lockdown in future, should they get the full 80 per cent wage subsidy?

‘The prime minister’s position on this is robust. The furlough scheme will be available in all parts of the UK.’

On Monday, Boris Johnson pledged to extend furlough payments at 80 per cent to December and said he was sorry about the hardship that businesses had already endured this year.

He said: ‘That’s why we are going to extend the furlough system through November.

‘The furlough scheme was a success in the spring and supported people in businesses in a critical time. We will not end it, we will extend furlough until December.’

The extended furlough scheme will see employees receive 80 per cent of their current salary for hours not worked, up to a maximum of £2,500.

However his comments appeared to contradict Communities Secretary Robert Jenrick who said it would be down to the Treasury as to whether the coronavirus support package continued after December 2. 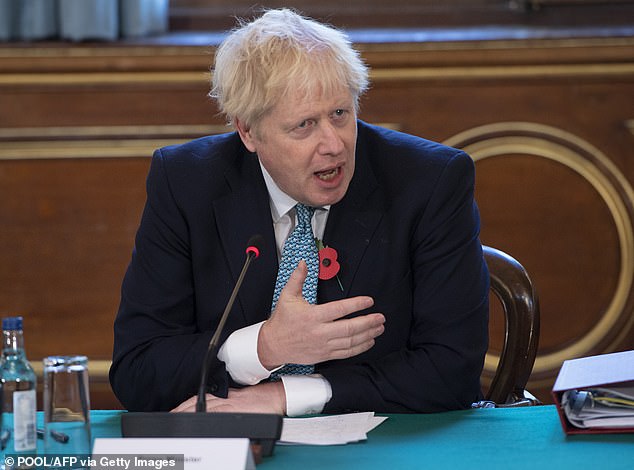 The Chancellor had hoped that the furlough scheme, along with a number of changes to support measures, would provide ‘a vital safety net’ for people across the UK who are about to face a tough winter.

However, such levels of support have added to Britain’s already crippling levels of debt.

It emerged earlier in the pandemic that the PM had borrowed more in five months to tackle coronavirus than the Government did in the entire year after the 2008 financial crash.

The bruising economic fallout of the pandemic was laid bare by the Office for Budget Responsibility (OBR) as the UK’s national debt surpassed £2trillion.

In a bleak 10-page analysis of the state of the public sector finances, the OBR underscored how deep the nation had plunged into the red.

From April to August this year net borrowing ballooned beyond £173billion as the Chancellor bankrolled furloughed employees’ wages and handed rescue loans for businesses.

After Mr Johnson plunged the nation back into a full lockdown, one economist predicted a devastating impact to the tune of £1.8 billion ever day, with restrictions likely to see office parties cancelled and festive spending plummeting.

Prof Douglas McWilliams, founder of the Centre for Economics and Business Research, told The Sun: I’m afraid it’s going to be a bleak Christmas for the economy and it will have devastating effects.

‘The retail sector will be particularly hard hit as sales are about 50 per cent higher than the monthly average at this time of year. The impact of reduced Christmas spending will be huge.

‘If the office bash is cancelled, people won’t be buying a new party frock.’