Boris Johnson today vowed to once again make the UK the ‘foremost naval power in Europe’ as he said a £24 billion boost to the budget of the Ministry of Defence will ‘spur a renaissance of British ship building’.

The Prime Minister said the UK must not ‘curl up in our island’ and leave the task of tackling terrorism and facing down global threats to its allies.

He confirmed the armed forces will receive an extra £16.5 billion over the next four years on top of a previous Tory commitment to raise defence spending annually by 0.5 per cent above inflation.

However, there are major question marks over how the additional spending will be paid for while Downing Street has also been forced to deny that the new money for the military is simply an attempt to impress US President-elect Joe Biden.

There is growing speculation that some of the money could come from the foreign aid budget, with Chancellor Rishi Sunak due to set out the Government’s one-year Spending Review next week.

Mr Johnson formally announced the extra funding in a statement to the House of Commons this afternoon as he was asked by Labour leader Sir Keir Starmer to guarantee the aid budget will not be cut.

The premier insisted the additional money for the MOD ‘bears absolutely no relation to discussions about overseas aid’.

His comments came after Defence Secretary Ben Wallace was unable to say where the extra money will come from.

He said the ‘very large settlement for defence will allow us to fix the problems we have inherited’ as well as providing ‘headspace to modernise our forces’.

But he conceded the additional cash will only be enough for the military if it ‘tailors’ its ambitions in the coming years.

It is understood the funding announcement comes after Mr Johnson overruled Mr Sunak who wanted to give defence a 12-month increase worth just £1.9billion.

The bigger settlement will be spent on a ‘space command’ that could launch Britain’s first rocket in 2022, research on ‘blue-skies’ projects and investment in a new Tempest fighter.

Billions will also go on artificial intelligence and the creation of a National Cyber Force of hackers trained to tackle online threats from Britain’s enemies. 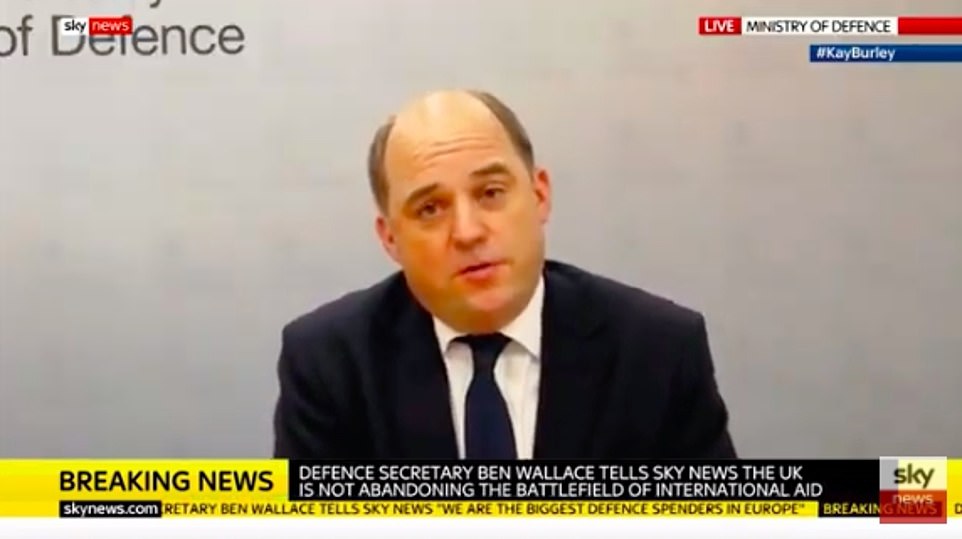 There are growing fears over the state of the public finances after the Government borrowed tens of billions of pounds to prop up UK plc during the coronavirus crisis.

The UK’s national debt hit a record £2.06 trillion in September as borrowing hit 103.5 per cent of gross domestic product

The public sector debt to GDP ratio is now at its highest level since the 1960s and Mr Johnson’s extra cash for the MOD will increase concerns about how Britain will afford its ongoing spending spree.

The cash boost announced by Mr Johnson takes the total defence budget to £45billion this year, meaning Britain will continue to be the largest defence spender in Europe and the second-largest in Nato, behind only the US.

Speaking in the House of Commons this afternoon, Mr Johnson said the money would be used to improve the Royal Navy’s capabilities.

He said: ‘We are going to use our extra defence spending to restore Britain’s position as the foremost naval power in Europe, taking forward our plans for eight Type-26 and five Type-31 frigates and support ships to supply our carriers.

‘We are going to develop the next generation of warships including the multi-role research vessels and Type-32 frigates and this will spur a renaissance of British ship building across the UK.’

The Prime Minister argued that ‘if there was one policy which strengthens the UK in every possible sense, it is building more ships for the Royal Navy’.

He continued: ‘Once both of our carriers are operational in 2023, the UK will have a Carrier Strike Group permanently available, routinely deployed globally and always ready to fight alongside Nato and other allies.

‘Next year HMS Queen Elizabeth will lead a British and allied task group on our most ambitious deployment for two decades, encompassing the Mediterranean, the Indian Ocean and East Asia.

‘We shall forward deploy more of our naval assets in the world’s most important regions, protecting the shipping lanes that supply our nation, and we shall press on with renewing our nuclear deterrent.’

Mr Johnson said the ‘era of cutting our defence budget must end – and it ends now’ as he told MPs the pandemic had shown the importance of being prepared for any and all eventualities.

‘We could take all this for granted, ignore the threat of terrorism and the ambitions of hostile states, and hope for the best, and we might get away with it for a while, before calamity strikes, as it surely would,’ he said.

‘Or we could accept that our lifelines must be protected, but we are content to curl up in our island and leave the task to our friends.

‘My starting point is that either of those options would be an abdication of the first duty of Government to defend our people.’

Mr Johnson faced a grilling from Sir Keir over where the money will come from as the Labour leader asked if it would be from extra borrowing, tax increases or raids on other portfolios like international development.

The PM replied: ‘This is the biggest package of support for our armed services since the end of the Cold War, it bears absolutely no relation to discussions about overseas aid.’

Mr Wallace had earlier insisted the extra money will be enough to fill the MOD’s budget blackhole. 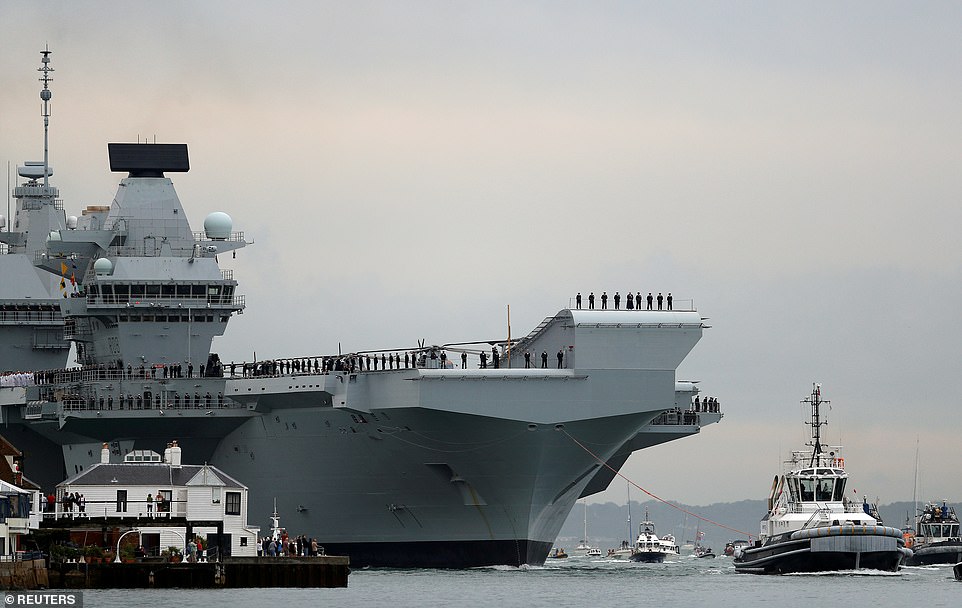 He told Sky News: ‘First of all, it is enough. It is actually, if you take our 0.5 per cent manifesto commitment it is a £24 billion boost overall, it is £16.5 billion on top of what we have already committed in our manifesto.

‘It is enough depending on how your ambition is tailored. I have been very clear as Defence Secretary that one of the failures of the past reviews was our funding never matched our ambition.

‘That goes for most of the reviews of the last 40 years. This means that we can have a proper discussion about what are our global ambitions and how are we going to fund it.

‘This very large settlement for defence will allow us to fix the problems we have inherited, the blackhole that the NAO obviously identified, and allow headspace to modernise our forces.’

The Defence Secretary said finding the money will be up to Mr Sunak, telling Sky News: ‘The overall decisions fall, the whole of the Government budget will be obviously revealed next week during the spending review announcement by the Chancellor and I am not going to preempt the Chancellor.

‘Obviously the Chancellor has to find money from across the taxpayer, the Government.

‘He will have made those decisions and the Prime Minister will direct the priorities. Where it comes from is obviously within that total overall envelope.’

The Defence Secretary was also grilled on the issue during an interview on ITV’s Good Morning Britain programme as he was asked why the UK would cut foreign aid at a time when so many developing countries are struggling because of the pandemic.

He said: ‘I don’t know where we are going to get the money insofar as I don’t know whether the Chancellor has made a decision on the foreign aid budget or other budgets. That will be revealed next week.’

Ministers are said to be considering cutting the UK’s foreign aid commitment from 0.7 per cent of GDP to 0.5 per cent.

The prospect of a temporary cut to international help has prompted a Tory backlash, including from former prime minister David Cameron, with many backbenchers adamant the current aid spending target must be maintained.

Meanwhile, Downing Street today denied that the new military spending plans are an attempt to win over the US and Mr Biden.

The scale of military expenditure among Washington’s Nato allies has long been a gripe of the US.

‘The statement today and the integrated review is a focus on what Britain needs in terms of defence moving forward and that is what the Prime Minister will set out in the House shortly.

‘I would point back to the general principle of the need to innovate and evolve to new emerging threats and as a result of the extra spending the thousands of jobs that will be created as a result.’

Pushed on whether the extra money was an attempt to impress Mr Biden, the spokesman said: ‘The purpose of this as I have said is to fill the blackhole that existed in the equipment budget to allow the military to modernise and to evolve in terms of adapting to new and emerging threats.’

Whitehall sources had claimed the Mr Johnson wanted to show Mr Biden the UK was a dependable ally, and No 10 said the money would ‘demonstrate to our allies they can always count on the UK’. 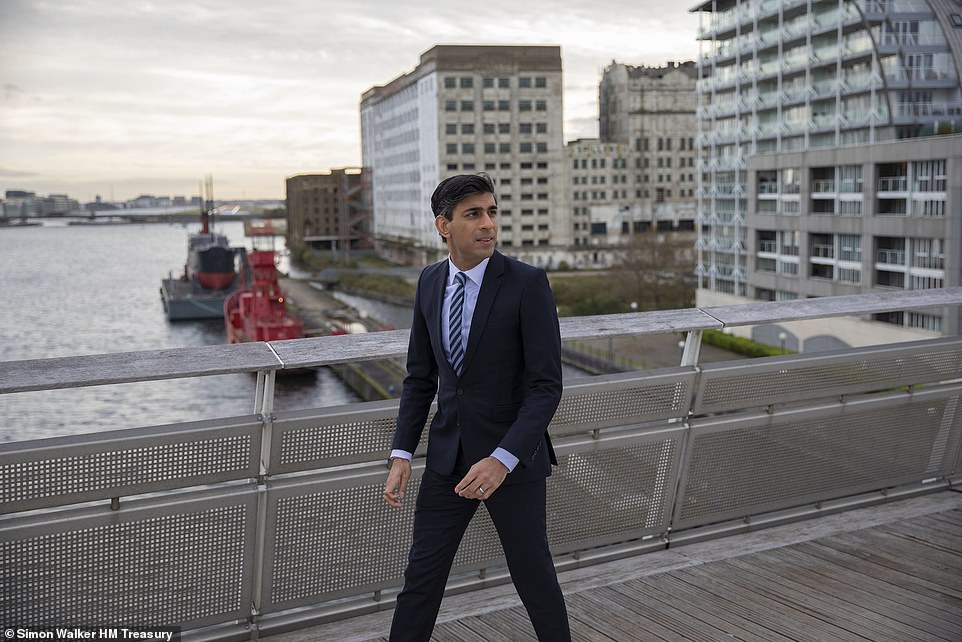 The PM’s announcement comes after Mr Johnson overruled Rishi Sunak who wanted to give defence a 12-month increase worth just £1.9billion 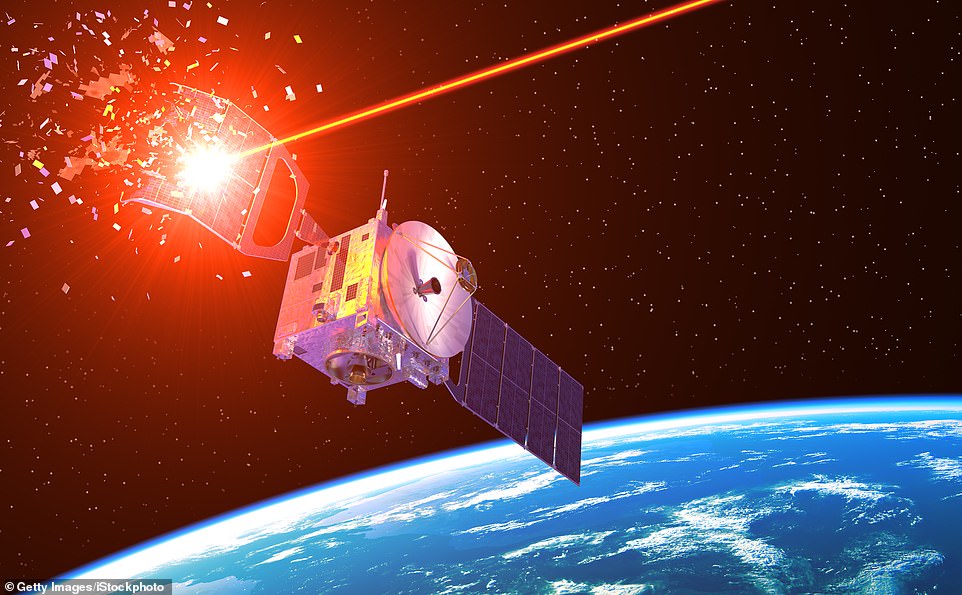 The money will be used to fill the armed forces’ budget blackhole and find new technologies. Pictured is an illustration of a laser weapon destroying a satellite in outer space

Downing Street also warned that threats to the nation will no longer be confined to distant battlefields. Instead, Britain’s enemies could reach people ‘through the mobile phones in their pockets or the computers in their homes’.

It added: ‘UK defence therefore needs to operate at all times with cutting-edge technology. This reverses the systematic decline in this crucial area in the last 30 years.’

The MOD has spent a year on an ‘integrated review’ of the threats facing Britain and how the Government plans to tackle them.

Mr Johnson had told Mr Sunak that the armed forces needed an extra £15billion, but Mr Wallace fought for more over fears that the Ministry of Defence could end up with barely enough to fill its funding deficit. Insiders claimed it needed £20billion to modernise.

In a victory for Mr Wallace, the MoD will now receive £16.5billion above the Tories’ manifesto commitment over four years.

The Government had pledged to raise spending by 0.5 per cent above inflation for every year of this Parliament. The total amounts to £24.1billion more.

No 10 estimates the extra MOD spending will help to create 10,000 jobs annually.