Boris Johnson last night refused to comment on the explosive allegation that his father struck his mother and broke her nose.

Charlotte Johnson needed hospital treatment after she was hit by her husband when the Prime Minister was ten, according to a new biography.

Mr Johnson’s spokesman refused to comment on the incendiary claim.

Author Tom Bower claims the astonishing secret, combined with the troubled relationship of Boris’s parents, defined him as a man.

Boris Johnson last night refused to comment on the explosive allegation that his father struck his mother and broke her nose. He is pictured above yesterday on The Andrew Marr Show

‘Boris agonised over his mother’s fate,’ he writes in The Gambler.

‘Not only had he watched her suffer, but also saw his father blatantly deny the truth. Unwilling to confide in others about his father’s violence, he became a loner.

‘In his solitariness, his competitiveness was offset by self-doubt. To mask the misery and hurt, he demanded attention.

Doctors spoke to Stanley Johnson ‘about his abuse’ of his then wife, while the couple’s four children were told a car door had hit their mother’s face, it is claimed.

Friends said the incident took place in the 1970s when Mrs Johnson was suffering from obsessive compulsive disorder and had ‘flailed’ at Stanley, who broke her nose when ‘flailing back’.

They added that Stanley, now 80, deeply regretted the incident and denied that he had been violent on any other occasion. He did not respond to requests for a comment yesterday. 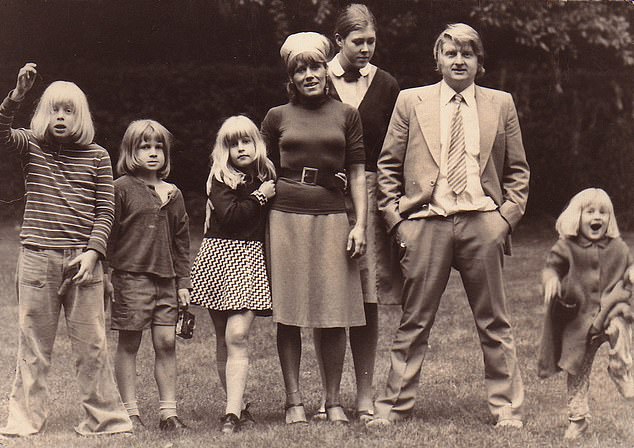 Unhappy families: Boris is on the far left, his parents on the right. Based on interviews with hundreds of colleagues and family members, the book portrays Boris as a loner who struggled to cope with his parents’ divorce in 1978

Mr Bower describes Stanley’s marriage to Charlotte as violent and unhappy. In the book, she is quoted as saying: ‘He broke my nose. He made me feel like I deserved it.’

Mrs Johnson’s parents visited their daughter in hospital and confronted Stanley who denied any involvement, the book claims.

The author says Mrs Johnson ‘confronted Stanley about the affairs she suspected him of having’, which he denied.

In the book, which is being serialised in The Mail on Sunday, Mrs Johnson, now 78, says: ‘Stanley wanted to be loved and wanted sex and he wanted power. And when I contradicted him, it threatened his power.’

Based on interviews with hundreds of colleagues and family members, the book portrays Boris as a loner who struggled to cope with his parents’ divorce in 1978.

‘I need you’: PM’s last text to Arcuri

The Prime Minister sent an alleged mistress a text message saying ‘I miss you and I need you’ while courting current fiancee Carrie Symonds, it is claimed.

When he was Mayor of London, Boris Johnson is said to have had a four-year affair with Jennifer Arcuri – a pole-dancing American businesswoman.

In a new biography about the Prime Minister called The Gambler, by Tom Bower, it is suggested Miss Arcuri ended their relationship as his second term as mayor came to an end in May 2016.

The biography claims his last text message to her was sent on December 29, 2018. He allegedly wrote: ‘I miss you and I need you.’ She deleted the text.

By then, Mr Johnson was divorcing his wife Marina Wheeler and had already been courting Miss Symonds since February of that year.