Dilyn stays! He’s unruly and not house-trained… but we love him: Boris Johnson sticks by pet dog amid rumours he is losing patience with the feisty Jack Russell

He is alleged to have found himself in the doghouse, but Boris Johnson insisted yesterday he would not be getting rid of his pet Dilyn.

On a visit to a secondary school in Wales, he said: ‘The dog stays.’

It was reported last week that the Prime Minister was losing patience with the Jack Russell, which was brought in by his fiancee Carrie Symonds from an animal rescue charity in Wales in 2019.

He is alleged to have found himself in the doghouse, but Boris Johnson insisted yesterday he would not be getting rid of his pet Dilyn (pictured together during the general election)

The pet has apparently not been properly house-trained and has destroyed expensive artefacts at the PM’s country residence.

Mr Johnson is said to have jokingly called for someone to ‘please shoot that ****ing dog’ after the two-year-old caused damage at Chequers in Buckinghamshire that left him with a four-figure repair bill.

On another occasion Downing Street aide Katie Lam, who worked for the Prime Minister’s former chief adviser Dominic Cummings, put down her bag and other belongings in the No 10 garden – only to see Dilyn cock his leg over them. 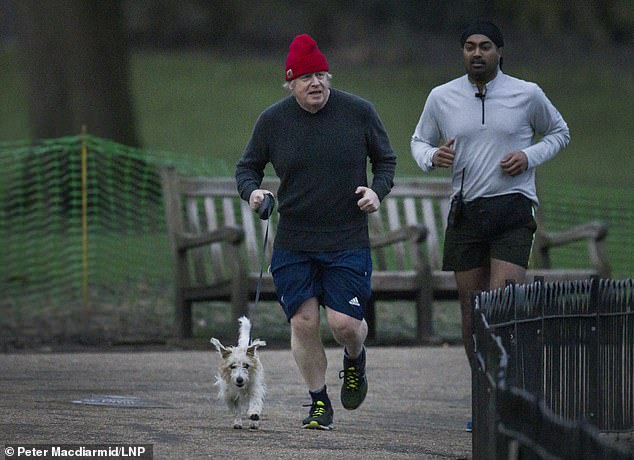 The Daily Mail reported last week that a horrified Miss Lam instinctively pushed away the dog to protect her possessions.

Miss Symonds is believed to have arrived at the scene shortly after the incident last year.

According to some sources, she remonstrated with Miss Lam.  However, this is disputed by others.

Friends of the Prime Minister have stressed that he loves Dilyn.