Boris Johnson warned ministers today that he will not abandon Britain’s ‘core principles’ in search of an EU trade deal as he rejected suggestions the UK is ready to make concessions.

The Prime Minister told his Cabinet today ‘his position hasn’t changed’ amid reports that chief negotiator Lord Frost had identified a ‘landing zone’ for an agreement next week.

Such an agreement would end months of torturous talks between the two sides which appear to be mired in deadlock over fishing rights and state aid rules.

Ministers have been keen to play hardball with a deadline for agreeing a deal to come into force before December 31 gets ever closer. But according to the Sun, Lord Frost has been more optimistic.

However officials dismissed the claims that a date of next Tuesday had been earmarked.

And Mr Johnson used blunt rhetoric when he addressed ministers this morning via Zoom, because he is in self-isolation.

‘The PM said that his position hasn’t changed: the UK is keen to secure a deal with the EU, but not at the cost of our core principles around sovereignty and control over our laws, borders, money – and our fish,’ his spokesman said today.

‘We are working hard to find solutions which fully respect UK sovereignty, but it is far from certain that an agreement will prove possible and time is now very short.’

The two sides continue negotiations in Brussels with just over six weeks to go until the end of the transition period.

Lord Frost (pictured today) is said to have told Boris Johnson that there is a ‘possible landing zone’ between Britain and the EU within seven days, according to the Sun. 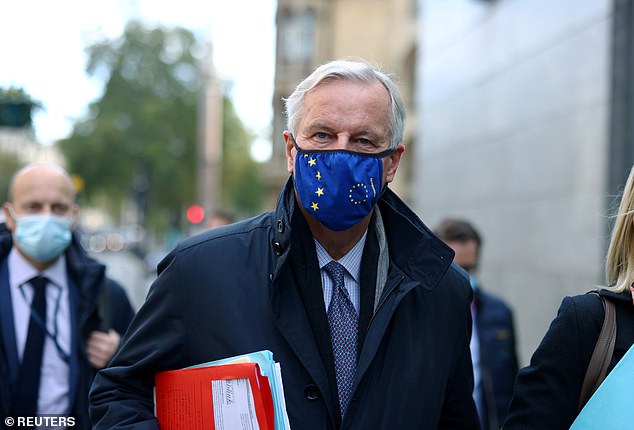 If the deal is struck, it will end almost a year of tough negotiations – led by Mr Frost and his counterpart Michel Barnier (above)  – over future trade between Britain and EU after Brexit 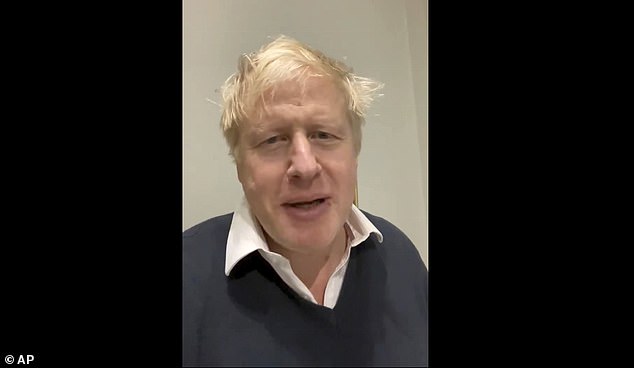 Mr Johnson (pictured from a video yesterday) has repeatedly warned the UK will leave on that date, with or without a trade agreement – a move which would see trade between the two countries would default to World Trade Organisation (WTO) rules

Boris Johnson has been urged to negotiate an adjustment period into any final trade agreement with the European Union to provide ‘breathing space’ of up to six months for businesses.

With Thursday touted as the latest deadline for negotiations, the Liberal Democrats and a leading business figure have joined forces to press the Prime Minister to effectively extend the transition period to give businesses more time to adjust to any new regulations.

The transition period is due to end on December 31, meaning a new customs regime and other new Brexit-related rules are due to come into force at the start of next year.

But Sir Ed Davey, leader of the Lib Dems, and former Siemens boss Juergen Maier have told Mr Johnson in a letter, seen by PA news agency, that ‘breathing space’ is required for businesses to adjust to any changes agreed with Brussels.

They warned that industry is already dealing with the ‘unprecedented’ challenges caused by Covid-19 and that the threat to some firms was ‘existential’.

‘Uncertainty is bad for business at any time, but the combination of the challenges of battling the impact of coronavirus restrictions alongside having now to cope with the huge challenge of complying with new trading procedures, at very short notice, could be very damaging,’ they said.

‘Indeed, some in the business community tell us they are seriously concerned that the threat they face due to these twin challenges is existential.

‘Industry bodies from every sector of the economy have warned that they will need time to adjust.

‘So we urge you to negotiate the reasonable and practical measure of a three to six-month adjustment period in the EU trade deal, to save jobs and businesses.

‘By phasing in new rules, regulations and procedures, our businesses would have the breathing space they need to prepare and adapt. The UK will also have time to prepare for the logistical burden of customs checks at the border.’

The Lib Dems pointed to comments made by Environment Secretary George Eustice on Sunday in which he suggested there would be a ‘phasing-in period’ for checks on goods entering Northern Ireland at the end of the Brexit transition period, and urged ministers to widen the policy to cover all sectors.

If the deal is struck, it will end almost a year of tough negotiations – led by Mr Frost and his counterpart Michel Barnier – over future trade between Britain and EU after Brexit.

It came as it was revealed the peer once warned that any post-Brexit trade talks would leave the UK at a disadvantage.

In a 2016 pamphlet for the Portland Communications consultancy, written in a personal capacity when he ran the Scotch Whisky Association, Lord Frost wrote: ‘After leaving, the UK will have to renegotiate trading arrangements simultaneously with many major countries, including the EU, in a two-year window. There may not be goodwill

Britain will be demandeur (applying for deals)  and so it will be Britain that has to make the concessions to get the deal.

‘True, other countries will want deals too, but they won’t be under anything like the same time pressure and can afford to make us sweat.’

The talks, which follow a similar round in London last week, come ahead of a European Council video summit on Thursday which has been touted as a deadline for a draft deal.

Though the UK officially left the EU on January 31, it will not leave the single market and customs union until December 31.

Mr Johnson has repeatedly warned the UK will leave on that date with or without a trade agreement – a move which would see trade between the two countries default to World Trade Organisation (WTO) rules.

Yesterday, Health Secretary Matt Hancock suggested Britain was not prepared to bend to demands from the bloc that it make concessions on fishing rights and state aid rules – two of the Government’s supposed ‘red lines’ in the negotiations.

His comments came as talks continued between Britain and the EU in Brussels yesterday.

But the talks played out amid increasing concern an agreement would not be signed ahead of the end of the transition period.

Mr Frost said on Sunday that, while there had been some progress over recent days and the two sides had common draft treaty texts, significant elements were yet to be agreed.

Mr Hancock meanwhile warned that the Government’s red lines had not changed.

Speaking to Sky News, Mr Hancock said: ‘Our red lines haven’t changed and we’re preparing for whatever the outcome is.

‘Of course our preference is to get a deal and that is open to the Europeans if they choose to make the progress that’s needed.’

The UK later called for the European Union to show more ‘realism’ in the negotiations.

The Prime Minister’s official spokesman said: ‘The negotiations have resumed in Brussels. The discussions will be based on our largely common draft treaty texts.

‘But significant differences do remain and key elements in the draft texts are not yet agreed.

‘What we are working to do is seek solutions that fully respect UK sovereignty.

‘Negotiators have been in contact almost every day since October 22 and they are continuing to work intensively to bridge the gaps that remain between us.

‘But, although there has been some progress in recent days, there is much work to be done and time is now very short.

‘So if we are to make further progress in the coming days, we need to see more realism from the EU on what it means for the UK to be an independent state.’

The trade talks resumed this morning after there was little movement on the most contentious areas last week when the two sides missed the latest mid-November deadline.

Both sides have called on each other to shift position for the breakthrough needed to secure a deal and offer businesses clarity on what happens at the beginning of next year.

British officials repeatedly say any deal must respect the country’s sovereignty but the EU says the proximity of Britain to the bloc means Brussels cannot hand it a trade deal similar to those it has agreed with countries such as Canada – which is the deal Britain has supposedly been pushing for from the start.

A senior EU diplomat, speaking on condition of anonymity, said the two sides were ‘still a bit too far away to be able to feel comfortable’, repeating that Britain needed to make a choice because ‘the timetable is very tight’.

According to the Sun, EU negotiators are poised for 11th hour talks if necessary, and have set a cut-off point of New Year’s Eve.

It comes as yesterday, Ireland warned that a trade deal must be done this week.

Environment Secretary George Eustice made clear the government was still prepared to walk away if necessary as he played down the impact of the dramatic departure by Mr Johnson’s chief aide Dominic Cummings – one of the most hardline Brexiteers in No10.

The defiant stance came as Dublin’s foreign minister Simon Coveney warned it was ‘move week’ and there needs to be a settlement at least in ‘principle’.

He said a deal was ‘doable’ but cautioned that there was still a major standoff over fishing, with the EU demanding 50 per cent of the catch in British waters and the UK saying it should only be 20 per cent. 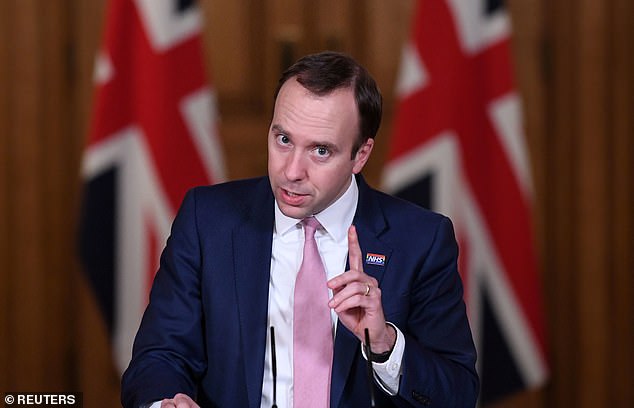 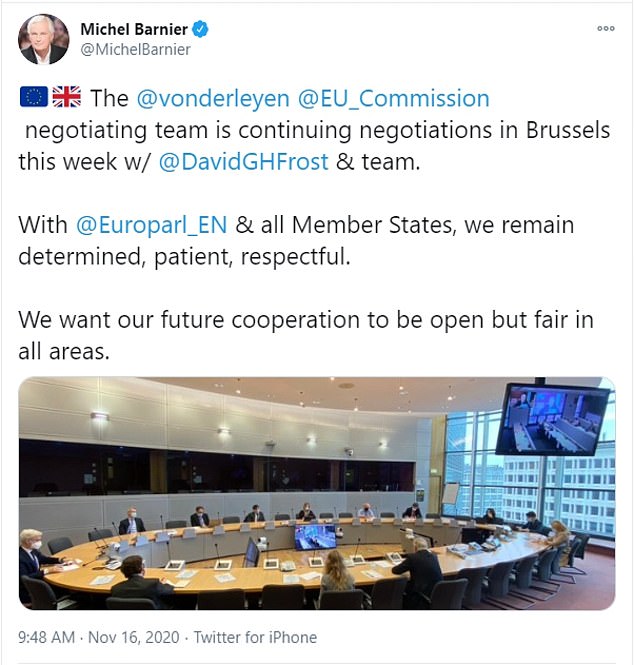 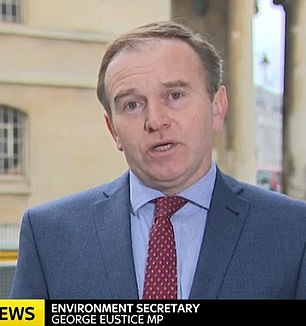 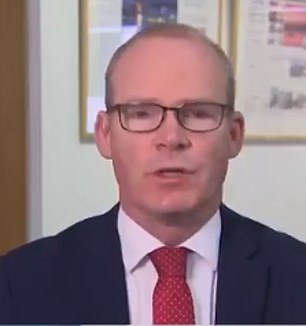 Dublin’s foreign minister Simon Coveney (right) said it was ‘move week’ and there needs to be a settlement at least in ‘principle’. Environment Secretary George Eustice (left) dismissed the idea that the government will back down on fishing

He also insisted the bloc would not ratify any deal unless clauses in the Internal Market Bill overriding the Brexit divorce terms were dropped – although he also suggested that issue will ‘disappear’ if there is a wider trade deal.

Mr Eustice said the UK cannot be the ‘only country in the world that doesn’t control its own waters’.

But he said there did need to be ‘headlines’ of a trade agreement this week. ‘There does come a point frankly where businesses need to know what they are preparing for,’ Mr Eustice told Sky News’ Ridge on Sunday.

‘This needs to be a week where things move,’ he added.