Boris Johnson last night announced that 600,000 fast Covid tests are to be sent out across the UK, as plans moved closer for a mass testing program in another major city.

The Prime Minister said the rapid lateral flow tests will be sent out to local public health leaders in the coming days in a bid to help areas detect asymptomatic cases.

The antigen tests can tell if a person is currently infected with coronavirus and the lateral flow technology can produce results within an hour.

It comes as plans were reportedly being drawn up last night to make Nottingham the next city to undergo a major program of mass testing.

The Midlands city would become the second area to undergo mass testing, after Liverpool.

On top of that, asymptomatic NHS staff in England will receive Covid-19 tests twice a week, the health service confirmed last night.

Speaking about the latest testing drive, Health Secretary Matt Hancock said: ‘Last week we rolled out mass testing in Liverpool using new, rapid technology so we can detect this virus quicker than ever before, even in people who don’t have symptoms.

The Prime Minister said the rapid lateral flow tests (pictured: British Army Brigadier Joe Fossey, holding a component of a lateral flow Covid test) will be sent out to local public health leaders in the coming days in a bid to help areas detect asymptomatic cases 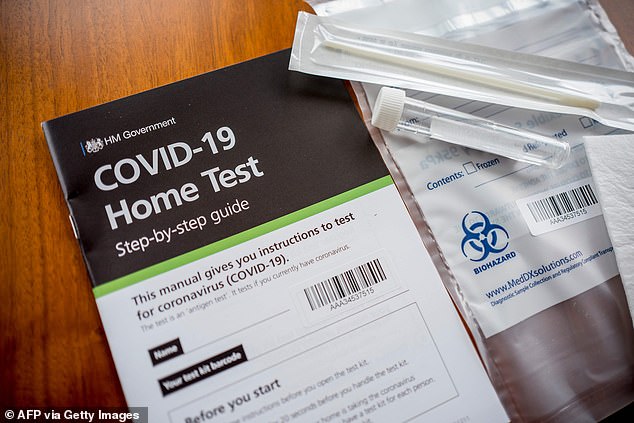 WHAT ARE RAPID ANTIGEN TESTS?

Antigens are parts of a virus that trigger the immune system’s response to fight the infection, and can show up in blood before antibodies are made.

Testing for antigens can identify people who are at the peak of infection, when virus levels in the body are likely to be high.

Those in favour of the tests argue that they could be a game changer because they can immediately spot those who are at greatest risk of spreading the disease.

Antigen assays are much faster and cheaper than the gold-standard tests that detect viral RNA using a technique called the polymerase chain reaction (PCR).

But antigen tests aren’t as accurate as the PCR versions, which detect minuscule amounts of coronavirus.

Some experts worry that antigen tests will miss infectious people and result in outbreaks.

But the consensus is that the devices would compliment mass PCR testing systems.

Antigen tests are used to diagnose patients with flu, as well as malaria, strep A and HIV. They can also be done using swabs.

‘Mass testing is a vital tool to help us control this virus and get life more normal.

‘I am delighted to say 10,000 of these tests will now be sent out by NHS Test and Trace to over 50 directors of public health as part of our asymptomatic testing strategy.

‘I want to thank all directors of public health for their support and efforts over the past months to help us tackle this virus, bring it under control and get the country back to what we love doing.’

As part of the UK-wide testing drive, the 600,000 lateral flow test kit will be issued to more than 50 directors of public health across England in the coming days.

The initial batch will be followed up with a weekly allocation of the tests, equivalent to 10 per cent of the population.

Local health leaders will be able to determine the allocation of the tests based on the needs of their communities, and it is hoped that the rollout will enable priority and high-risk groups to be tested on a weekly basis.

Interim executive chair of the National Institute for Health Protection, Baroness Dido Harding, said: ‘I am delighted that as part of our expansion of testing we are able to partner with local authorities to deliver these new rapid turnaround tests to our local communities.

‘Building on national capacity of 500,000 tests a day we are now moving to the next stage of testing tailored around the individual needs of local areas with control in the hands of local directors of public health.

‘There has been a huge amount of work to develop these new testing capabilities and I want to thank colleagues across NHS Test and Trace, Public Health England and the wider scientific community for ensuring that we are one of the first countries in the world who are able to deploy these new tests for the benefit of our public.’ 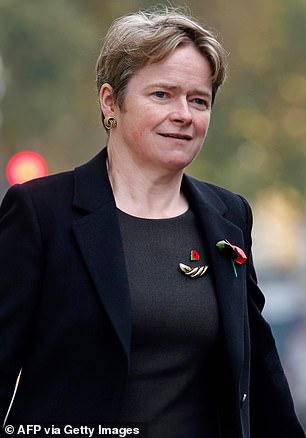 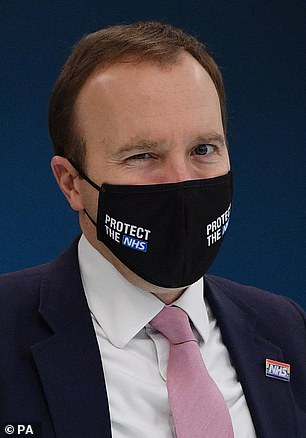 Moonshot is seen as the only way out of the perpetual loosening and tightening of lockdown curbs without a viable vaccine.

The Prime Minister told its 500,000 residents to ‘do it for your friends, for your relatives, for your community’ in a bid to ‘drive the disease down’.

Lateral flow tests, with a turnaround time of under an hour, have been available since Friday for people who live and work in the city and do not have symptoms.

‘We’ve tested thousands of people there, but there’s still a lot more to do.

‘So please, if you are in Liverpool, get yourself along to a testing centre – there are 19 at the moment with more still to come and the more people get tested, the better we can protect that great city and drive the disease down in Liverpool.

His comments were echoed by Brigadier Joe Fossey, who is coordinating mass testing in Liverpool.

He told the press conference: ‘Our message to the people of Liverpool is clear: we are set up and ready for you to come and get tested.

‘Please do not hesitate. Make the most of this opportunity.

‘What we are trialling now is a possible route out of lockdown and a way to get on with our lives.’

The call came as the city’s mayor Joe Anderson said 23,170 people have been tested for coronavirus in the city since midday on Friday, with 0.7% testing positive.

Discussions for Nottinghamshire to become the next region for mass coronavirus testing took place on Monday afternoon, according to reports.

The announcement, expected to cover the city of Nottingham and the wider county, would follow the pilot scheme in Liverpool. 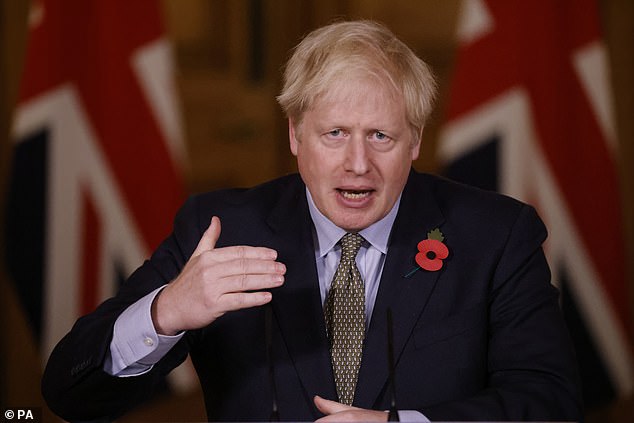 Meanwhile, asymptomatic NHS staff in England are to receive Covid-19 tests twice a week, the health service has confirmed.

In a letter to Jeremy Hunt, chairman of the Health and Social Care Committee, Prof Powis said the tests will initially be given to 250,000 staff across 34 NHS trusts, with a full rollout expected by the end of next week.

Routine testing of NHS staff is already taking place in the hardest-hit areas. 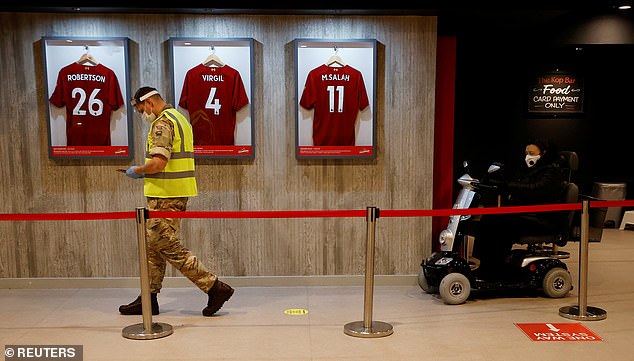 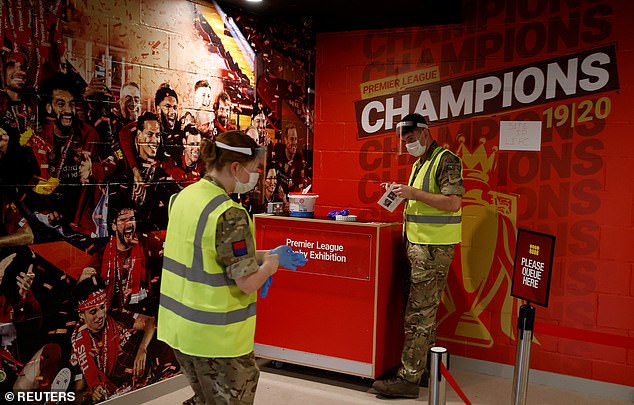 Brigadier Joe Fosse, overseeing military Covid testing in Liverpool (above) said: ‘Our message to the people of Liverpool is clear: we are set up and ready for you to come and get tested’

Prof Powis wrote: ‘Following further scientific validation of the lateral flow testing modality last week, and confirmation over the weekend from Test and Trace that they can now supply the NHS with sufficient test kits, I am pleased to confirm asymptomatic testing of all patient-facing NHS staff.

‘The first 34 trusts will deploy this technology this week, benefiting over 250,000 staff, and full rollout should be in place by the end of next week.

‘Staff will be asked to test themselves at home twice a week with results available before coming into work.

‘Lateral flow devices have a lower specificity and sensitivity than PCR tests.

‘Testing twice weekly helps mitigate the sensitivity considerations, and to mitigate the lower specificity all positive results will be retested via PCR.

‘As you know, this builds on the extensive asymptomatic staff testing already occurring in parts of the country with outbreaks – over 70,000 NHS staff have been tested asymptomatically in those areas in recent days.

‘In addition, as previously notified, NHS trusts will continue to use their own PCR lab capacity for appropriate staff testing, and LAMP saliva testing is being made available to hospitals by Test and Trace in November and December.’

Commenting on the news, deputy chief executive of NHS Providers, Saffron Cordery, said: ‘If this test is sufficiently reliable it could make a real impact on curbing the spread of infection and help to avoid unnecessary staff absences.

‘We need to recognise that getting these tests done on this scale is going to be a significant challenge.

‘There could also be real difficulties for trusts under major operational pressure that have to manage the risk of losing a number of key frontline staff all at once if a significant number of tests come back positive at the same time.

‘We have been arguing for some time that the NHS needed advance warning of when this move was going to be made so it could plan effectively.

‘It would therefore, once again, have been better to have had this news with more notice and in greater detail.

‘Trusts and frontline staff could then have been clear on how this new approach will work in practice, along with evidence of the tests’ reliability so they could be confident in supporting their introduction.’