The civil war in Downing Street after the ousting of two top aides took another dramatic turn last night as a flurry of astonishing new claims emerged.

Among them was the suggestion that Boris Johnson appointed his new press secretary – former BBC and ITV journalist Allegra Stratton – to appease fiancee Carrie Symonds and prevent her from ‘going f****** crackers’.

The shocking allegations came after a weekend in which Downing Street’s dirty laundry was aired for all to see, with the infighting that led to the departure of Dominic Cummings and communications chief Lee Cain laid bare.

The influential aides both left No 10 on Friday, seemingly having lost a power struggle with Miss Symonds and her allies.

Among the slew of allegations was the suggestion that Boris Johnson appointed his new TV spokesman  to appease fiancee Carrie Symonds (pictured together outside No. 10)

The war of words, played out in claim and counter-claim, has cast a shadow over Mr Johnson’s leadership at a time when the country should be focused on fighting the coronavirus pandemic.

Downing Street has been braced for a series of ‘revenge’ stories since Mr Cummings and Mr Cain left, given their inside knowledge of the corridors of power.

Friends of Miss Symonds hailed her for ending the ‘macho culture’ within No 10, denied claims that Mr Johnson was ‘running government by girlfriend’ and accused detractors of ‘rank misogyny’.

She has been dragged into infighting as part of a smear campaign, angry allies said. But last night insiders showed no sign of letting the bitter row drop with a number of breathtaking new claims.

Most extraordinary of all was the allegation that, as mistrust circled among those closest to the PM, discussions were even held in which one official suggested that top secret information should be kept from Mr Johnson’s red box – the Government briefcases used by all ministers.

The notion was reportedly floated in response to concern that some ‘non-sensitive’ issues in his red box had been mysteriously leaked. There is no suggestion that Miss Symonds was involved.

Downing Street also last night angrily rebuffed the claim, saying it was ‘categorically untrue’. Miss Symonds did not respond to a request for a comment.

Insiders said the acrimony between Miss Symonds and Mr Cummings and Mr Cain was obvious as far back as March.

It was then that she allegedly tried to stop the Prime Minister hosting a Covid crisis meeting to deal instead with a newspaper report claiming she wanted to get rid of their beloved Jack Russell cross Dilyn.

Mr Cummings ‘forced’ Mr Johnson to overrule his fiancee, it was claimed. He told No 10 officials to block any phone calls from Miss Symonds to the Prime Minister about the dog, it was claimed.

And he gave orders for Miss Symonds’ official protest about the news report about Dilyn to be ‘burned’.

Miss Symonds was said to be livid at a report in The Times which claimed that she no longer liked the animal.

She went on Twitter to denounce it, saying: ‘Total load of c***. There has never been a happier, healthier and more loved dog than Dilyn.’

The dispute with Mr Cummings and Mr Cain flared when Miss Symonds apparently asked Mr Cain to make a formal complaint to The Times via the press watchdog, IPSO.

He refused to do so, pointing out that a Covid crisis meeting was about to take place in No 10 that day. Miss Symonds is understood to have contacted officials in Mr Johnson’s office and told them to scrap the coronavirus meeting because she wanted the Prime Minister to help her pursue her complaint with The Times.

When Mr Cummings found out, sources said, he stormed in to Mr Johnson’s office and told him to go ahead with the meeting – which took place as planned.

An insider claimed: ‘We were dealing with the extraordinary chaos of Covid, and Carrie f***** the (PM’s Downing Street) private office up for a whole day. All over something trivial about her dog.

‘She went bananas and spent the day on the phone to officials and the PM trying to force the Government machine to IPSO (send a formal complaint to the watchdog) The Times over it.’

This weekend the departure of Mr Cummings and Mr Cain was welcomed by many Tory MPs who believed volatile Mr Cummings had become too powerful.

Mr Johnson was furious at claims that Miss Symonds’ Tory foes have dubbed his fiancee and mother of his son ‘Princess Nut Nut’.

But many senior Conservatives have voiced concern at the apparent level of influence Miss Symonds has over Mr Johnson both politically and personally.

Miss Symonds, former head of Tory communications, has strong views on issues from the environment to early parole for rapists.

A close ally of Miss Symonds said: ‘Surely it is in the Prime Minister’s interest that he hears from a range of people.

‘What man wouldn’t ask their informed partner for their opinion on something to do with work?’ But a No 10 figure claimed Miss Symonds ‘bombards [Mr Johnson] with texts and everyone in Downing Street knows about their rows. 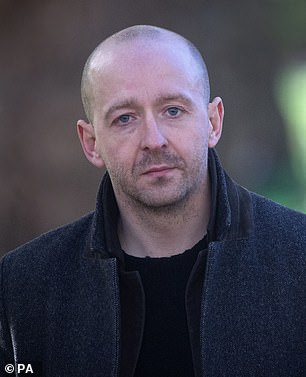 ‘I used to get angry with him for letting her get away with it, but now I just feel sorry. He looks very unhappy. It is as though she has taken him hostage. It cannot go on because it is terrible for our country.’

The appointment of Allegra Stratton as Mr Johnson’s official No 10 TV spokesman was a key factor in the turmoil that has engulfed the top of Government.

Insiders say that the Whitehall interview panel in charge of the appointment recommended another candidate.

However, Mr Johnson allegedly said: ‘Forget the process. I am giving the job to Allegra. I’ve got to do this because if I don’t, Carrie will go f****** crackers about it.’

An official said: ‘Allegra didn’t even know about Carrie’s intervention. But it could rebound on him (Johnson). The Whitehall paper trail will show the truth; that he went totally against the official recommendation of the interview panel – and he will have to explain why.’

Tory critics of Miss Symonds claim her allies are now gunning for Chancellor Rishi Sunak because he ‘does not let outsiders interfere’ in the Treasury.

They say she has urged Mr Johnson to recall Mr Sunak’s predecessor Sajid Javid. Miss Symonds is a former aide to Mr Javid, and the two have remained close allies.

A source said: ‘Rishi won’t put up with outside interference and insists things are done by the book. She wants Javid back as a counter to Rishi.

‘Tory MPs are celebrating Cummings’ and Cain’s downfall but they may think again when they see how this has been manipulated by Carrie who has an agenda no one voted for.’

Mr Cummings told the Mail last night: ‘I’ve nothing bad to say about Carrie, I wish her well.’