Friends and family could be given the green light to meet up indoors for the first time in months today as Boris Johnson eases lockdown.

Cinemas, pubs and hairdressers are set to allowed to reopen in England from July 4 – dubbed ‘Super Saturday’ by some MPs – in a dramatic effort to get the country up and running again.

Throwing the dice with the economy threatening to go into meltdown, the PM will halve the two-metre social distancing rule crippling thousands of businesses and announce a return for staycations.

There is also speculation that people will be permitted to meet up in each other’s homes, although it is understood the proposal will not be the same as Northern Ireland where up to six people can gather indoors from today.

It is not clear whether the blueprint – being signed off by the Cabinet this morning before Mr Johnson makes a statement to the Commons later – will mean children can hug their grandparents yet. Reports suggest a mooted expansion of social ‘bubbles’, which would allow people to mix freely in groups, might have been dropped.

In a sign of the risks involved, Mr Johnson will warn that the changes will be reversed immediately if people abuse the new rules and the disease flares up again.

The relaxation – which will take effect the US Independence Day – comes amid growing optimism that the virus, which has claimed more than 42,000 lives in the UK, is finally dwindling.

Cinemas, pubs and hairdressers will today get the green light to reopen on July 4, as Boris Johnson signals the end of lockdown. The relaxation comes amid growing optimism that the virus, which has claimed more than 42,000 lives in the UK, is finally reducing to manageable proportions 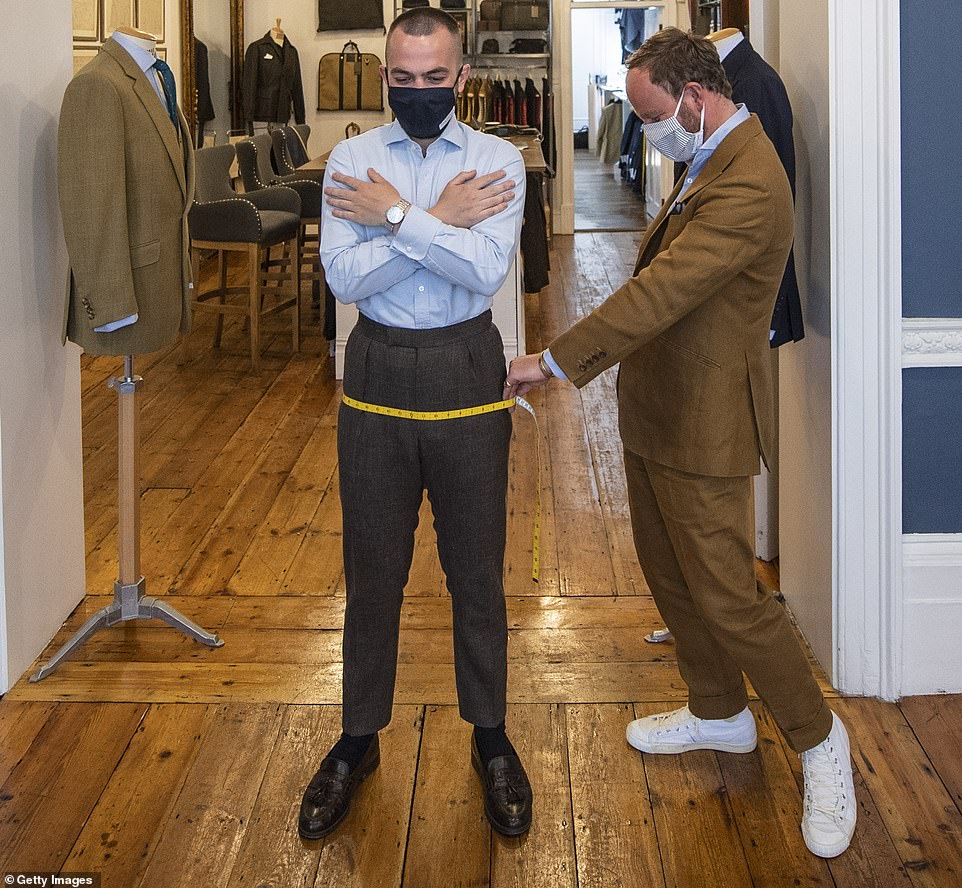 The Prime Minister will also confirm the end of the two-metre rule, with businesses allowed to operate a one-metre rule as long as they introduce other measures to cut the virus risk. (Above, a shopper is fitted for a suit by a tailor in London’s Savile Row on June 15) 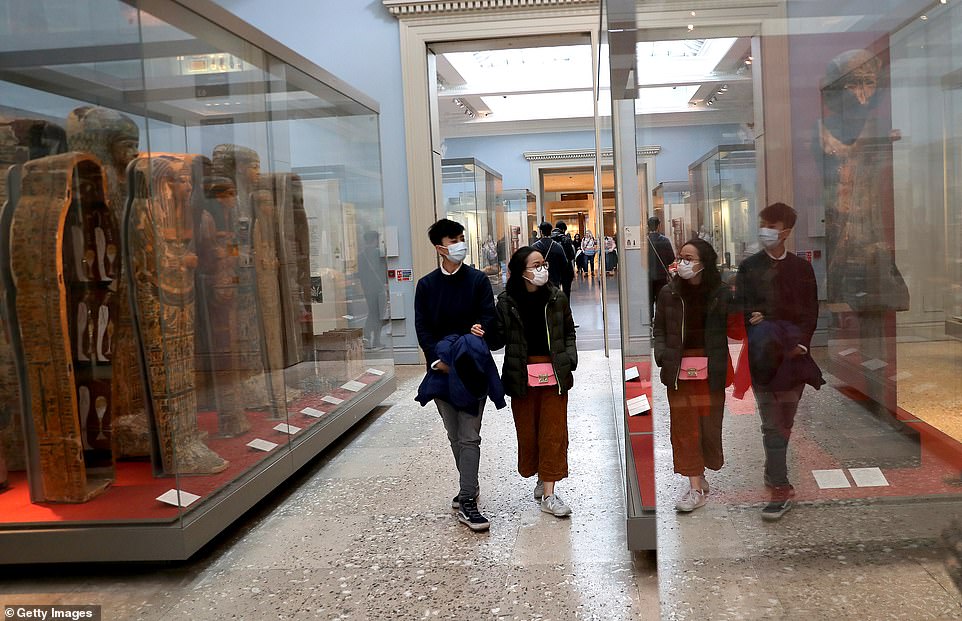 In a calculated gamble designed to rescue Britain’s economy, the PM will announce that key sectors including tourism and hospitality will be allowed to reopen next week for the first time since March. Government sources said some indoor venues, including cinemas, museums and art galleries, can reopen next week provided they take measures to reduce the risk of spreading coronavirus. (Above, visitors to the British Museum on March 17) 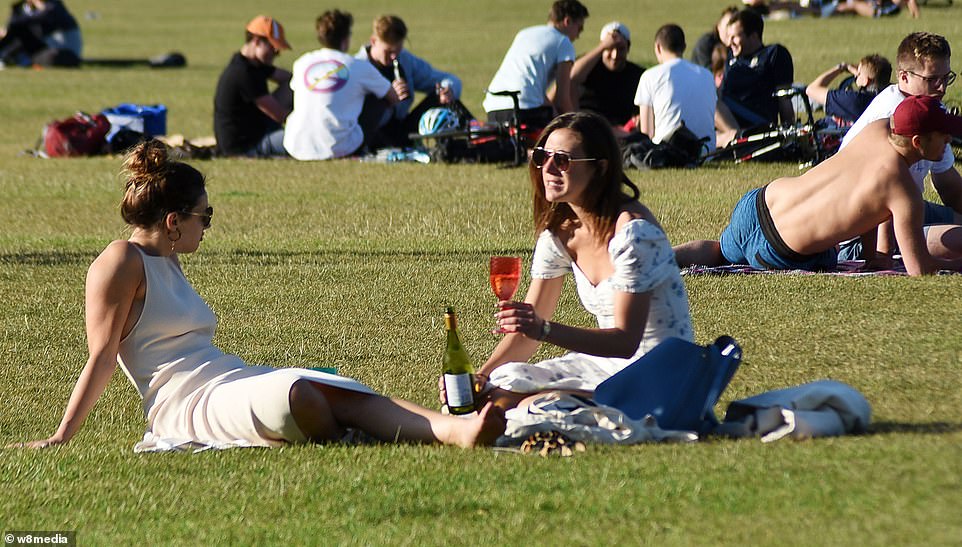 Boris Johnson is expected to confirm that from July 4 the British tourist industry can reopen, giving millions the hope of a ‘staycation’ in the UK this summer. (Above, people relax in the sunshine on Wandsworth Common, south London, on Monday) 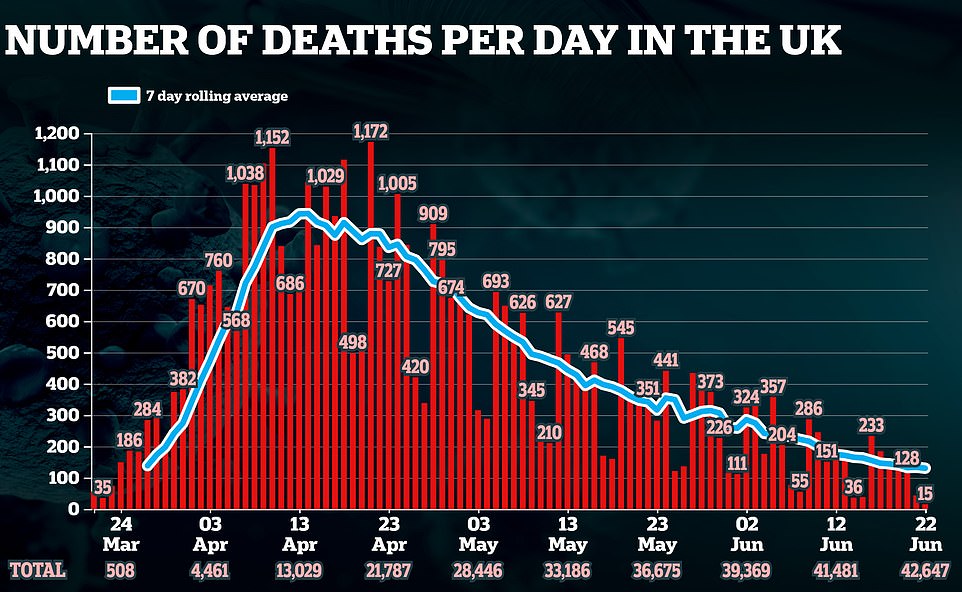 Last week’s reopening of non-essential shops led to a 51 per cent surge on the high street compared with a week earlier.

Figures from retail data analyst Springboard also showed that numbers in England rose as the week went on, as customers started to feel safer.

However, they were still down by nearly half on a year ago – and not all areas saw the benefit, with London’s West End seeing customer numbers 80 per cent below normal.

The focus of the attempted economic revival will be on activities that can take place outdoors.

But government sources said that some indoor venues, including cinemas, museums and art galleries, will also be allowed to reopen next week provided they take measures to reduce the risk of spreading coronavirus. 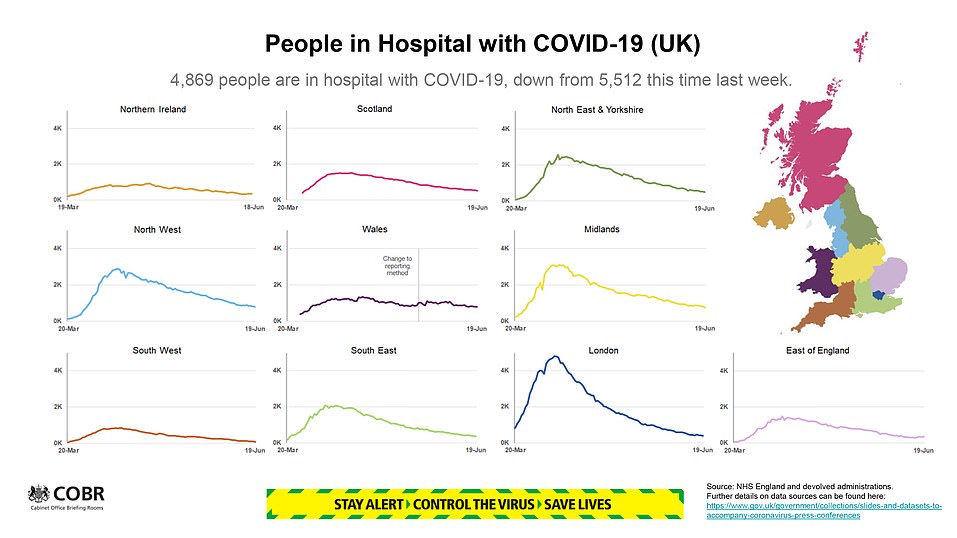 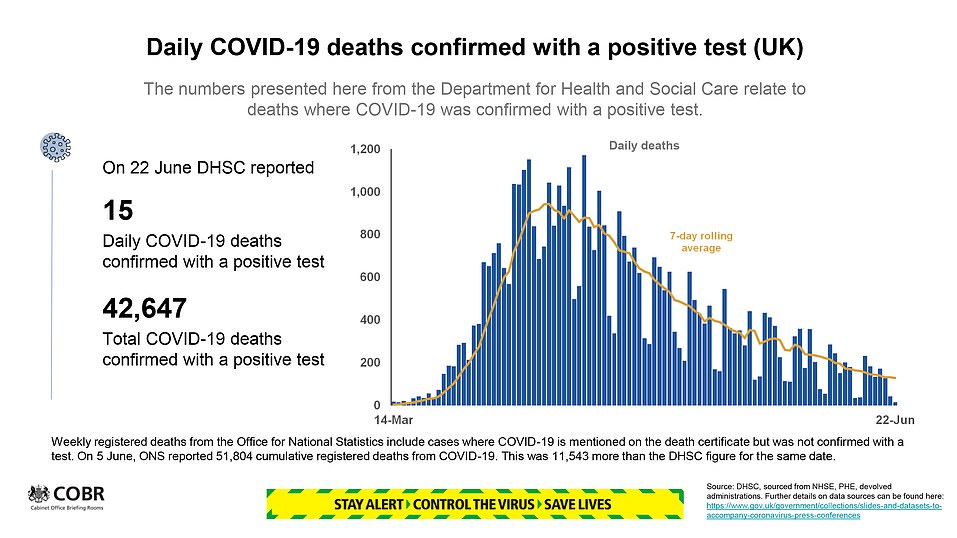 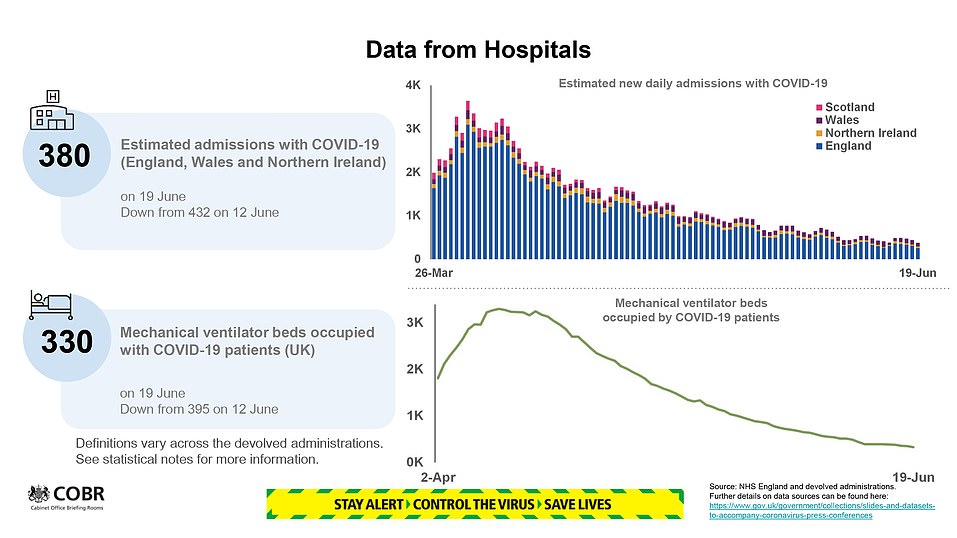 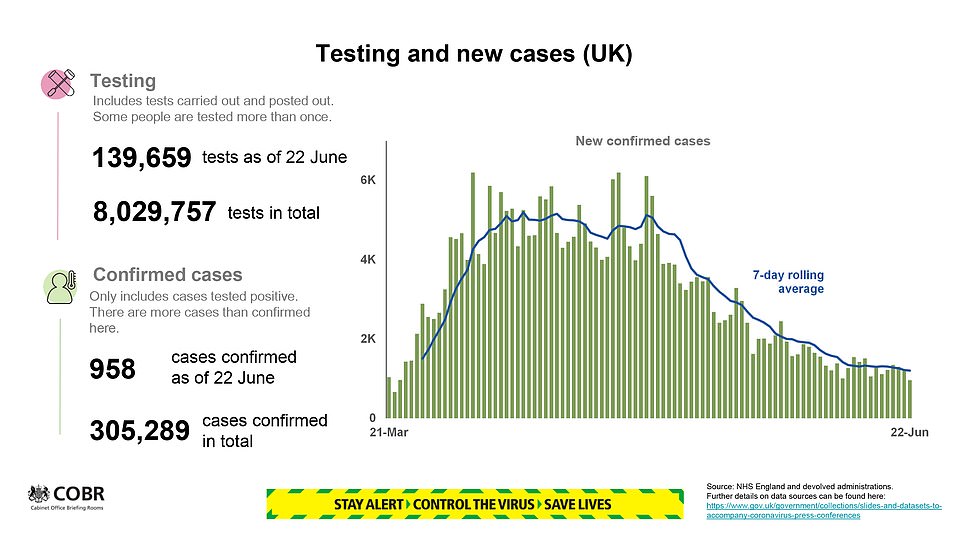 Fascinating photos show the transformation of Feelgood Fitness and Wellness Centre in Basildon, Essex, which is preparing to reopen as soon as the government allows.

Gym lovers are now primed enjoy working up a sweat on their running machines and stair-climbers whilst safely encapsulated in their own futuristic pods. 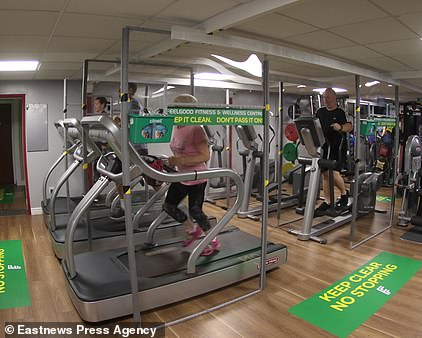 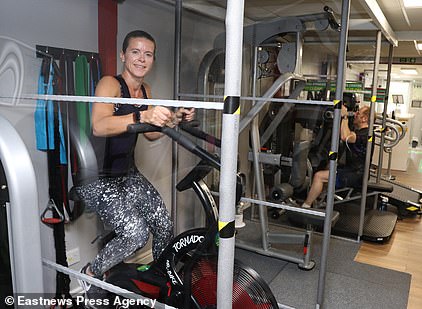 Owner Aaron Tyler, 41, who started the business in April, has designed the set-up so his customers will easily be able to see the person who is next to them.

He said: ‘I’ve put my heart and soul into this gym and now we’ve had to work so hard to make these changes.

A Downing Street source warned: ‘We are only able to move forward this week because the vast majority of people have taken steps to control the virus.

‘But the more we open up, the more important it is that everyone follows the social distancing guidelines. We will not hesitate to reverse these steps if it is necessary to stop the virus running out of control.’

The changes will only apply in England for now.

She said it was ‘very tempting’ to ease restrictions when death rates were falling, but said fresh outbreaks in Germany and China underlined the need for caution.

But Matt Hancock said official data on the epidemic supported the case for relaxing the rules.

The number of new cases fell to 958, the lowest figure since lockdown began on March 23.

The Health Secretary told the daily No 10 briefing last night: ‘A month ago, one in 400 people had the virus; now it is one in 1,700 and we can ease the lockdown.’

Today’s package of measures is expected to produce the biggest single relaxation of the lockdown so far.

One Whitehall source said it was ‘effectively the end of lockdown’ – although large gatherings will remain banned, theatres and nightclubs will have to stay closed, and modified social distancing rules will remain in place.

Cinemas will only be able to have customers in every other seat.

Museums and galleries will have to operate one-way systems and limit numbers.

Hairdressers will be required to take steps such as wearing personal protective equipment and to cut the small talk to limit the spread of the virus.

Pubs and restaurants will also be allowed to reopen, but with a heavy focus on the outdoors.

The change to the two-metre rule will mean that tables can be placed one metre apart, provided they are side by side.

The PM is expected to confirm that from July 4 the British tourist industry can reopen, giving millions the hope of a ‘staycation’ in the UK this summer.

Hotels, guesthouses, campsites, caravan parks and self-catering properties will all be permitted to reopen if they act to prevent the spread of the virus.

Owners of second homes will also be allowed to visit them again.