Boris Johnson will aim to reset his premiership today with a pledge to northern Tory MPs that he will not abandon them in favour of a more metropolitan agenda.

The Prime Minister will tell Tory MPs who helped propel him to victory in last year’s election that he will ‘never veer off the course’ that won him an 80-strong majority.

Mr Johnson will use the next fortnight to relaunch his leadership following the departure of Dominic Cummings and communications chief Lee Cain and amid worries he is being pushed into a ‘woke’ agenda by his fiancée Carrie Symonds, who seems to have won the Downing Street power struggle.

This afternoon he will meet the newly formed Northern Research Group (NRG), before unveiling his ten-point point plan to tackle climate change later in the week, and then finalising details of the Spending Review that will be announced by the Chancellor next Wednesday.

Allies of the Prime Minister last night said he would assure the northern MPs that levelling up the country is his ‘personal’ ambition and they will not be abandoned.

The group of more than 50 MPs last month wrote to Mr Johnson to demand that he does ‘not forget’ the commitments made at the last election when he won a swathe of so-called ‘red wall’ seats from Labour.

One of the ringleaders last night said there was concern within the group that the change in personnel in Downing Street will lead to the Prime Minister ‘forgetting the North and following a more metropolitan agenda’.

‘Northern working-class people are hard to win over and that we have to deliver for them,’ they added. ‘We want levelling up to be put on the Government’s agenda and not side-lined.’ 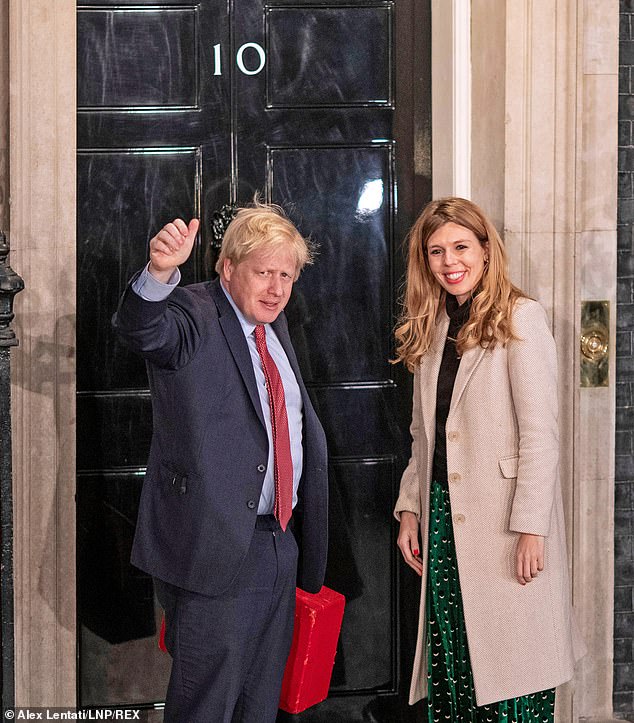 This comes amid worries he is being pushed into a ‘woke’ agenda by his fiancée Carrie Symonds, who seems to have won the Downing Street power struggle.

Another MP in the group warned there needs to be ‘more flat caps and less top hats’ in Mr Johnson’s inner circle and suggested he should demonstrate his commitment to the North as he picks a new chief-of-staff’.

‘If he wants to satisfy the voice of the North, why not make his chief-of-staff from the North?’ they asked. ‘There are only two MPs from northern seats in the Cabinet.’

The MP said that ‘if cultivated correctly’, northern backbenchers would ‘form a praetorian guard around the PM’ given their election wins were largely owed to him.

A government source last night rejected as ‘utter rubbish’ suggestions Miss Symonds was attempting to change the direction of No10.

They said: ‘The Vote Leavers who have left are trying to put around that we are going to abandon the Midlands and the North. That is total and utter b*****ks.’

The source said the Prime Minister’s meeting with the Northern Research Group marked the start of a new relationship between Downing Street and backbenchers.

‘There will be a change in approach in listening to MPs, and much more engagement. Dom didn’t do any of that, but that will change. No10 will be a much more accessible building,’ they said. 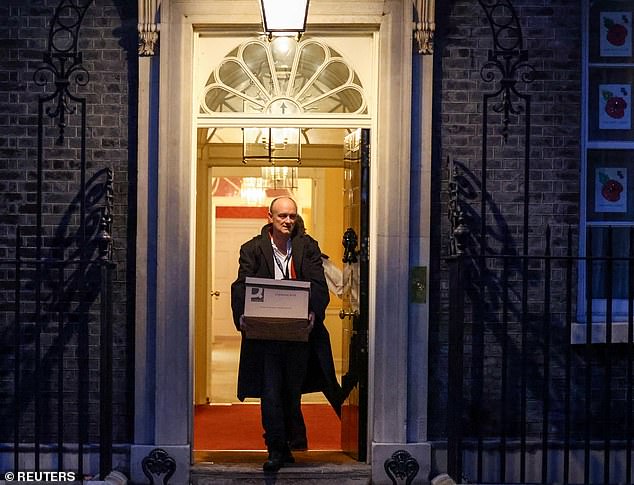 group of more than 50 MPs last month wrote to Mr Johnson to demand that he does ‘not forget’ the commitments made at the last election when he won a swathe of so-called ‘red wall’ seats from Labour. This comes following the departure of Dominic Cummings (pictured) and communications chief Lee Cain from Downing Street

A No 10 spokesman said: ‘This government is determined to improve opportunities for people across the country, regardless of their background or where they live in the UK.

‘We were elected on an ambitious manifesto to deliver this agenda, investing in education, skills and our NHS, tackling crime and introducing tougher sentencing for those who commit the most heinous crimes, as well as concluding our trade negotiations with the EU.

‘Our agenda remains focused on this and we will never veer off this course, as we build back better from the coronavirus pandemic.’

Allegra Stratton, the Prime Minister’s new press secretary, yesterday dismissed suggestions she is not a Conservative.

The former Guardian and BBC Newsnight reporter admitted voting for the Green Party, Labour and the Liberal Democrats in her youth, but insisted: ‘I’m definitely Brexit and a Johnson Tory.’

She told The Observer that she had been ‘upset’ by the power struggle within Downing Street. ‘The country does not want to be run by people in No10 who treat people discourteously and unpleasantly,’ she added.