Boris Johnson is ready to accept EU tariffs on some British goods in a bid to break the deadlock in EU trade talks.

The latest round broke up yesterday with both sides saying there had been no significant progress.

Under the plan, the UK would accept tariffs on a small number of goods in return for Brussels dropping its demand that Britain continue to follow EU rules.

Boris Johnson is ready to accept EU tariffs on some British goods in a bid to break the deadlock with Brussels in EU trade talks. Pictured: Speaking at the Global Vaccine Summit (GAVI) via Zoom from the White Room of 10 Downing Street in London on Thursday

Officials declined to say which sectors would be involved but pointed out that trade deals often involved tariffs on ‘sensitive agricultural goods’.

Any move to accept tariffs or quotas would be a significant concession for Mr Johnson, who has spoken repeatedly of his ambition to achieve a ‘zero tariff, zero quota’ deal.

The imposition of tariffs on agricultural produce would also hit British farmers and be unpopular with many Tory MPs.

Agricultural tariffs can be high. EU tariffs on lamb, for example, start at 13 per cent and can rise to more than 40 per cent, depending on the cut of meat.

British farmers will be hit by these tariffs if there is no trade deal by the end of the year and had hoped to avoid them through an agreement being struck. 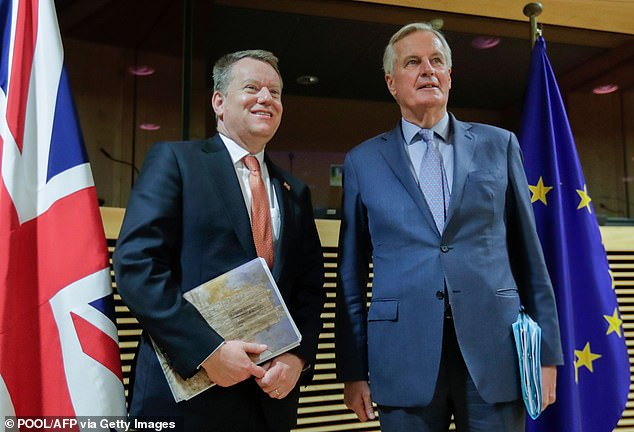 The Prime Minister’s chief negotiator David Frost (left) had made a significant new offer to accept tariffs on a small number of goods in return for Brussels dropping its demand that Britain continue to follow EU rules. Pictured: With European Union chief Brexit negotiator Michel Barnier (right) at the start of the first round of post-Brexit trade deal talks between the EU and the United Kingdom on March 2

In a further sign of Mr Johnson’s eagerness to strike a deal, sources said an earlier threat to walk away from the talks this month if no progress had been made has been relaxed in the light of the disruption caused by the pandemic.

Mr Johnson’s decision to allow talks to go beyond June despite there being no deal in sight will be seen as a sign of his desire to get an agreement that avoids further economic problems at the end of this year.

Despite the tough language, there were also signs of movement on the EU side.

Mr Barnier hinted at a possible compromise over the EU’s demand that the UK continue to follow its state aid regime, which has previously been a red line for the bloc.

Mr Frost is seeking to intensify negotiations in the coming weeks, including holding the first face-to-face talks since coronavirus struck.

The talks have been disrupted by the pandemic, with two sides forced to conduct negotiations by video link.

Mr Frost yesterday said they were ‘close to reaching the limits of what can be achieved’ remotely. He said there was now a need to ‘intensify and accelerate our work’.

A source declined to put a new deadline on the talks, but added: ‘We are not up for a long negotiation over the next months well into the autumn where nobody knows what is going to happen.

‘October is too late for us to conclude this.’ 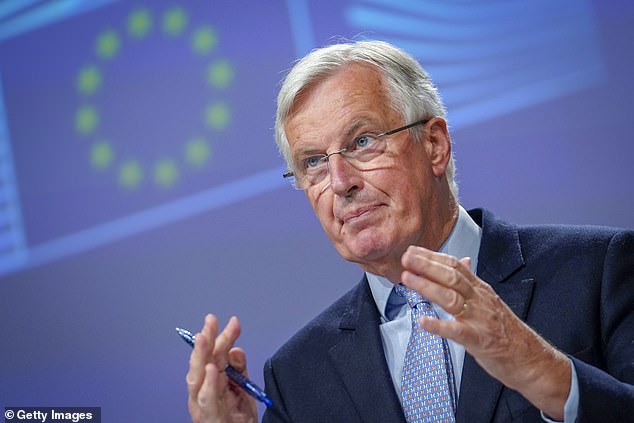 European Union chief Brexit negotiatorMr Barnier hinted at a possible compromise over the EU’s demand that the UK continue to follow its state aid regime, which has previously been a red line for the bloc

The talks are deadlocked over the issues of fishing rights and the EU’s demand for a ‘level playing field’. Mr Barnier accused the UK of failing to show ‘any true will’ to negotiate on fishing.

But British sources said that Brussels had to recognise that the UK would take full control of its waters from the end of this year and would then decide who fishes there.

The UK has rejected the EU’s demand for a detailed ‘level playing field’, arguing it goes far beyond the scope of a normal free trade agreement and would tie Britain into following the bloc’s laws indefinitely.

The idea to impose tariffs was not immediately welcomed by Brussels. ‘We floated that,’ the official said. ‘It fell slightly on stony ground at the moment but it is still in there in the discussions.

‘Obviously we would rather not go there but if it is what helps make progress, then we are willing to talk about that.

‘We will have to see if we get into those discussions and then see where it settles. We are not at that point yet.’

He said the ‘door is still open’ for the UK to extend the transition period beyond the end of this year, but this has been ruled out by No 10.

And he warned that failure to reach a deal would result in the imposition of a ‘hard border’ on the island of Ireland, which both sides have pledged to avoid.