Julian Smith’s removal as Northern Ireland Secretary represents a crushing blow for the man who successfully helped restore powersharing at Stormont after three years of deadlock.

Mr Smith did what his predecessors failed to do when he steered the devolved assembly back on track in January but it was not enough to keep him in the Cabinet.

He has been booted out by Boris Johnson with critics speculating he was relieved of his duties due to clashes last year over the PM’s Brexit policy.

An MP for Skipton and Ripon since 2010, he previously held the role of parliamentary secretary to the treasury and chief whip.

As chief whip he was tasked with trying – and failing – three times to help pass Theresa May’s withdrawal agreement and many were surprised that he was kept in the Cabinet when Mr Johnson took power in July last year.

The married 48-year-old was educated at the University of Birmingham, and Balfron High School before going on to have a successful career as an entrepreneur after setting up Arq International, an executive recruiting firm, in 1999.

In Parliament since 2010, Mr Smith served on the Scottish Affairs Committee briefly before he became Parliamentary Private Secretary to Minister of State for International Development Sir Alan Duncan MP between September 2010 and 2012.

He then became Parliamentary Private Secretary to Justine Greening MP, Secretary of State for International Development, between 2012 and May 2015, before he was appointed an Assistant Government Whip in David Cameron’s Government.

After the 2016 EU referendum, Mr Smith became one of six MPs who led Mrs May’s leadership campaign, and after the campaign’s success he was appointed Vice-Chamberlain of the Household – a senior position within the whips’ office.

Mr Smith attended the DUP annual conference in 2017 after the confidence-and-supply agreement between the Conservatives and the Democratic Unionists was brokered in the wake of the election, and was welcomed as a ‘friend’ of the party.

He backed Remain in the 2016 Brexit referendum and served as chief whip under Mrs May between November 2017 and July 2019 before surprisingly being made Northern Ireland Secretary by Boris Johnson – a role he held for 204 days.

He sparked controversy when he was critical of Mrs May’s approach, claiming that the government should have made it clear after the 2017 election that it would have to accept a closer relationship with the European Union following Brexit.

In a BBC documentary he also criticised ministers, accusing them of trying to undermine Mrs May, claiming their behaviour was the ‘worst example of ill-discipline in cabinet in British political history’.

In October 2013 The Guardian had claimed that Smith may have breached national security by posting an image of himself alongside military personnel at a high-security US base on his website.

Mr Smith says his interests include ‘violin and piano’ and was a junior international squash player. 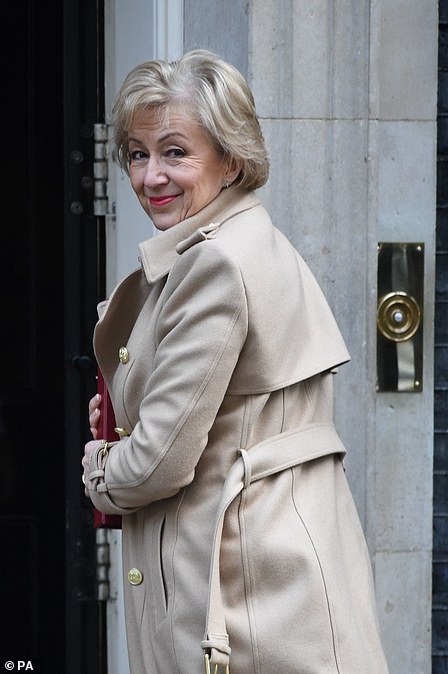 Andrea Leadsom: Out as Business Secretary

A former Tory leadership contender who was forced to apologise to Theresa May for suggesting being a parent made her a better leadership candidate than the childless ex-PM, Ms Leadsom leaves the government after six years on the front bench.

The Leave supporter, a mother of three, resigned as leader of the House of Commons in May last year amid a backlash against Mrs May’s Brexit plan.

Mrs Leadsom was hardly a household name when she first entered the fray to succeed David Cameron as leader of the Conservative Party in the wake of the EU referendum in 2016.

Her plans to cross the threshold of Number 10 were thwarted when comments which appeared to suggest being a mother gave her an advantage as a potential prime minister over Mrs May saw the then-energy minister’s hopes of winning evaporate.

In an interview she said: ‘I feel that being a mum means you have a real stake in the future of our country, a tangible stake.’

Her departure from the leadership race in 2016 resulted in her being appointed environment secretary when Mrs May became premier.

After the 2017 general election she was made Commons Leader, a role she held until Mr Johnson moved her to the business department.

Mrs Leadsom entered Parliament in 2010 after a 25-year career in banking and finance – realising an ambition she first developed at the age of 13.

Educated at Tonbridge Girls Grammar School and Warwick University, she rose to become financial institutions director at Barclays and worked with then Bank of England governor Eddie George to avert a crisis after the 1995 Barings collapse.

She later spent a decade in fund management – her financial experience gaining her first a seat on the Treasury Select Committee and then a stint as economic secretary to the Treasury with responsibility for financial services.

After a spell as a councillor in South Oxfordshire from 2003-2007 – during which she fought an unsuccessful general election campaign in the safe Labour seat of Knowsley South – she became MP for South Northamptonshire. 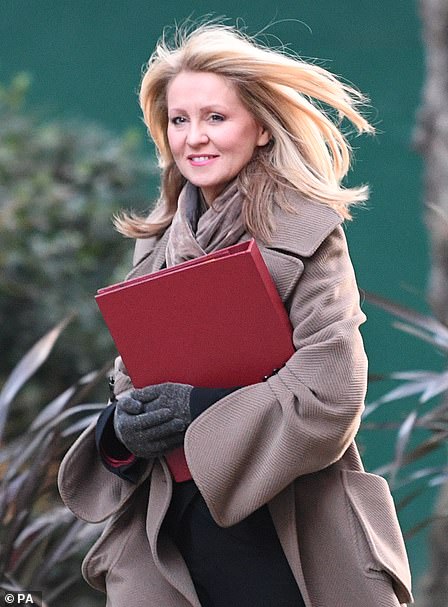 Esther McVey: Out as Housing Minister

Esther McVey found fame as a GMTV presenter in the 1990s before turning to politics, and was considered one of the Conservative Party’s strongest media performers.

The MP for Tatton – George Osborne’s old seat – resigned in protest from the Cabinet over Theresa May’s Brexit deal in November 2018 but was brought back to the top table by Boris Johnson last year.

Ms McVey made a bid for the leadership after Theresa May quit last year – but finished in last place after the first ballot of MPs.

The 51-year-old, who attended Cabinet as employment minister under David Cameron, was the most high-profile Tory casualty of the 2015 general election when she was ousted by Labour in Wirral West.

She lost her seat after the unions launched a concerted effort to remove her from a constituency which was surrounded by a sea of red.

She returned to Parliament in June 2017 after taking Mr Osborne’s seat and was made deputy chief whip in November the same year.

In January 2018, she made a remarkable comeback to the Cabinet table when she was appointed Work and Pensions Secretary.

In an interview with the Daily Mail late last year, Ms McVey revealed how she had been put into foster care as a baby after she was born to young parents.

She said: ‘I believe most people in their life will fall upon tough times at some point. I want to give the message that anyone can succeed given the opportunity.

But she sent Mrs May’s Cabinet into meltdown in November when she dramatically quit in fury at the PM’s Brexit divorce deal.

She joined Dominic Raab in storming out in fury after the PM put her blueprint to her ministers in a stormy five-hour cabinet session.

In March she boosted talk of a leadership bid after going public with her MP lover Philip Davies.

The four-year relationship between her and the stubborn backbench MP for Shipley, 47, was already an open secret at Westminster.

But the Brexiteer lovers went public to confirm they are ‘two individuals, but a couple’ in a joint-interview with the Conservative Home website.

She later revealed that they were planning to marry after he proposed in April. 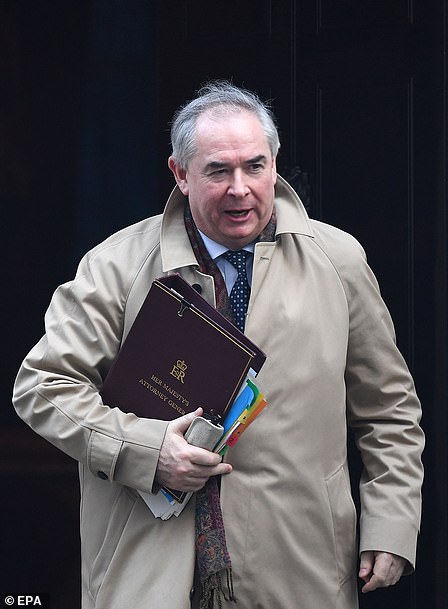 Geoffrey Cox: Out as Attorney General

Relatively unknown in Westminster before becoming Attorney General in 2018, Geoffrey Cox became a key player in Theresa May’s government in the run up to the original March 29, 2019 Brexit deadline.

He announced himself on the national political scene with a barnstorming speech as the warm up act for Mrs May at Conservative Party conference in October 2018.

With his booming voice and soaring rhetoric he left many in the conference hall wondering why he wasn’t the prime minister.

His professional opinion would later have a major impact on Britain’s departure from the EU.

MPs wrestled with the government as they demanded Mr Cox’s Brexit legal advice be published with the Commons eventually victorious in the contest.

The publication of the legal advice in December 2018 torpedoed Mrs May’s hopes of getting her Brexit deal through parliament because in it Mr Cox said the UK could not unilaterally leave the Irish border backstop protocol if it was ever implemented.

He wrote: ‘In the absence of a right of termination, there is a legal risk that the United Kingdom might become subject to protracted and repeating rounds of negotiations.’

The 59-year-old QC was chosen to stay in the role as the government’s top legal adviser by Boris Johnson when the latter took power in July last year.

He first became an MP in 2005 and has represented the seat of Torridge and West Devon ever since. Before his political career he was a barrister, having first been called to the Bar in 1982.

He is married and has three children.

He has been tipped to chair a democracy commission being planned by the government to examine the relationship between Parliament and the courts. 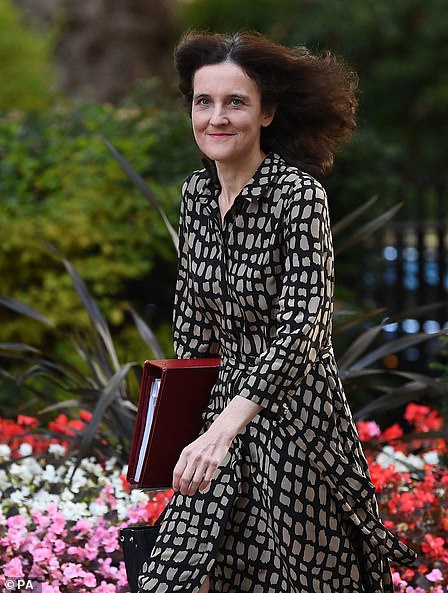 Theresa Villiers: Out as Environment Secretary

One of the leading Brexiteers in the government, Ms Villiers has been ousted as Environment Secretary after only being given the role in July last year.

Boris Johnson brought the divorced 51-year-old ex-barrister, who is descended from Edward II, back into government when he initially took power.

She had served as Northern Ireland Sectary in the coalition government and later under David Cameron’s Tory government before being sacked by Theresa May.

A lawyer, university lecturer and MEP before entering the Commons in 2005 the London-born and Bristol-educated MP for Chipping Barnet has not always seen eye-to eye with Mr Johnson over the environment.

She had shown her green credentials before her appointment last year having sparked a well-publicised hunt for a mystery litter bug who left their Crunchie chocolate bar wrapper in the House of Commons Chamber.

She attacked litterers who dump their rubbish – damaging the environment and harming people’s quality of life.

And she warned that even the Palace of Westminster is not immune to the anti-social activity.

Ms Villiers pulled out a crumpled up Crunchie bar wrapper which she said had been discarded carelessly on the green benches of the House of Commons.

Brandishing the shiny wrapper, she said: ‘However, I am afraid that it is not just young people who drop litter.

‘To illustrate that, I produce this Crunchie wrapper, which I picked up this week after it had been dropped in the back row of the main Chamber of the House of Commons.’

‘It is truly depressing that littering occurs even here, in this mother of Parliaments.’