The whole of Kent looks set to remain in Tier 3 despite huge disparities in infection rates between rural areas and urban hotspots, Boris Johnson hinted today.

The Government has been under pressure to take a local approach and split counties into different lockdown brackets amid fury that villages with only a handful of cases were being unfairly dragged into the toughest restrictions because of spiralling epidemics in major towns and cities.

Broad brush tactics used by Number 10 have been repeatedly criticised and Health Secretary Matt Hancock this week admitted the Joint Biosecurity Centre would consider splitting areas in pursuit of fairness. Essex and Hertfordshire have today seen parts of the counties put into Tier Three with others kept out.

But the PM told a Downing Street press conference tonight that Kent was still seeing a ‘worrying’ rise in infections and gave no indication that any local authorities would be downgraded.

Health chiefs are meeting today to review the Tier restrictions for the run-up to Christmas and are expected to be heavy-handed, with cases rising again nationally and the effects of the national lockdown having all but worn off.

Mr Johnson said: ‘There is no doubt we are winning and we will win our long struggle against this virus, which makes it all the more important that we hold our nerve this winter. Because we are now in a race to protect us all while doing everything we can to keep the virus under control. And thanks to the colossal collective effort in November we did bring the R below 1, we did get the infection rate down.

‘But I must be frank with you, we are already seeing worrying rises in some parts of the country. Kent is still seeing rising infections and the number of cases in London is at 270 per 100,000 people. And that’s why we acted quickly by moving London into Tier 3 from today. And tomorrow the Health Secretary will announce the outcome of the latest tiering review.’

The PM made the comments as he urged Britons to take extra precautions and keep their Christmas get-togethers ‘short and local’ to minimise the risk of spreading the disease.

More than 34million people are now living under Tier 3 rules, which prohibit people from meeting other households indoors and mean bars and restaurants can only offer take-away services. But even people living in Tier 3 areas will be allowed to meet in bubbles of three households between December 25 and 27 as part of the UK-wide lockdown loosening plans.

The official infection map of Kent shows that some areas in the north of the county, such as Medway and Swale, have some of the highest Covid rates in the country (darker colour shows higher numbers of coronavirus cases), while areas in the south are less badly affected 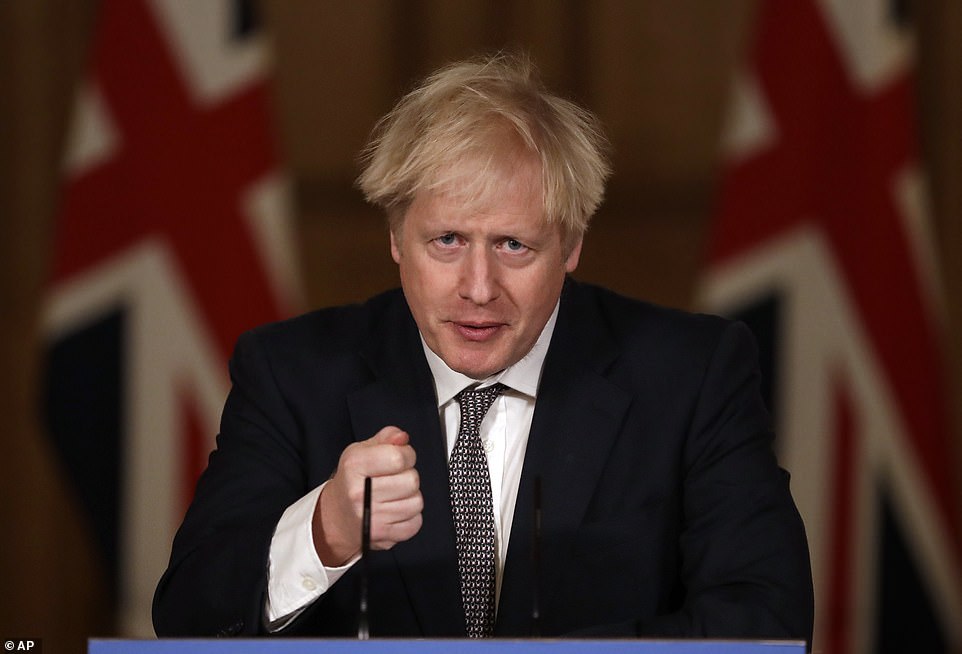 The whole of Kent looks set to remain in Tier 3 despite huge disparities in infection rates between rural areas and urban hotspots, Boris Johnson has suggested 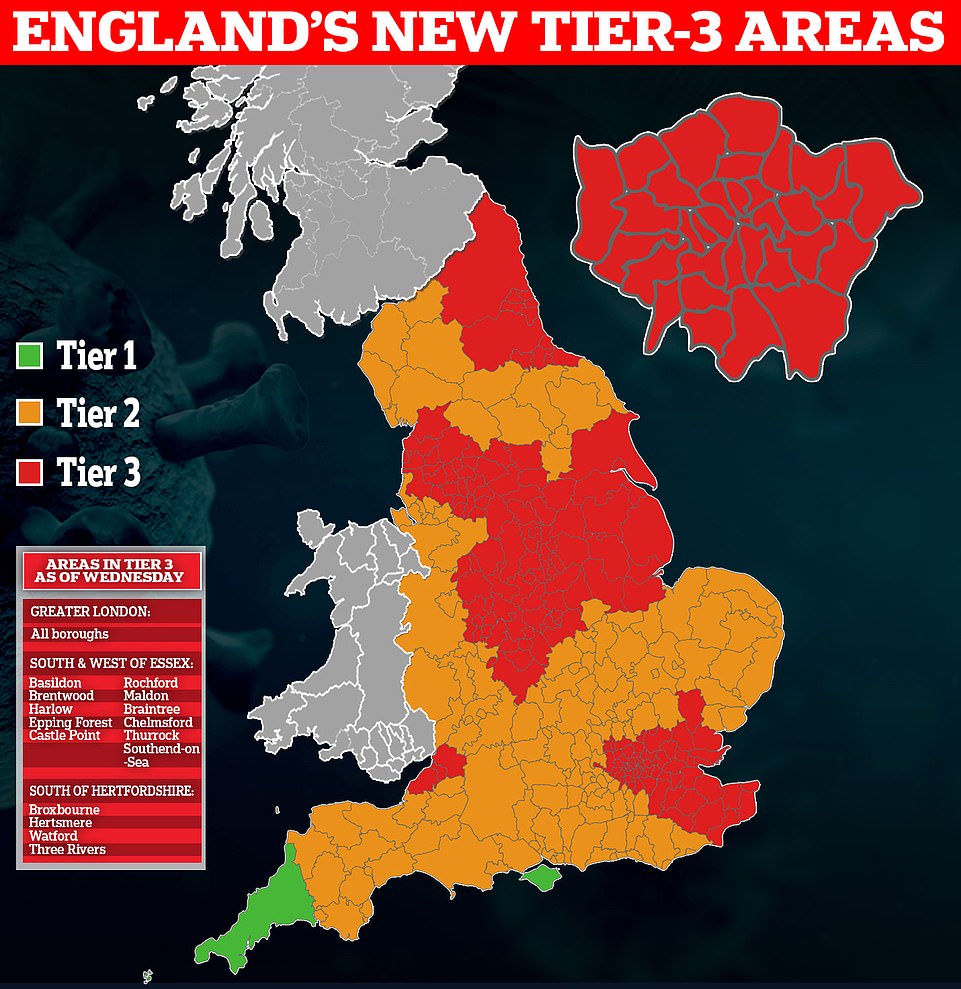 MPs from across the country have called for their rural residents to be cut some slack from draconian policies, with people living in ‘zero Covid’ villages lumped under rules triggered by outbreaks in nearby towns or cities.

Kent MP Tom Tugendhat is advocating for the county to be split into sections so people living in the countryside in his constituency can have more freedom. Kent is in Tier Three because Medway and Swale have some of England’s highest rates — but Department of Health figures show case numbers are rising even in smaller areas, proving that outbreaks can leak out into smaller communities.

In Lancashire and Leicestershire there are calls for some areas to be released from the toughest restrictions, with millions having been forced to live under strict curbs for months on end.

And data shows that counties in the South East – England’s new hotspot – are divided, with cases high and rising in the towns but much lower in the greener areas around them, with splits potentially on the cards for East and West Sussex.

Greater Manchester’s mayor Andy Burnham said the city has a ‘good case’ for being pulled out of Tier Three, having been under the tightest restrictions since October, although rates remain high in some districts.

Part of an island off the coast of Kent is currently suffering England’s worst Covid-19 outbreak, according to official figures.

Sheppey East — in the Tier Three borough of Swale — had an infection rate of 1,652 cases for every 100,000 people during the most recent week.

For comparison, the Department of Health says the overall figure for England in the same seven-day spell ending December 10 was just 184.

Six other wards across the nation had an infection rate above 1,000 over the same week, including two in Basildon — which entered Tier Three today.

Haltwhistle and Bardon Mill in Northumberland had the second biggest outbreak in the most recent week, with 1,138 cases for every 100,000 people.

The data only includes positive tests and is broken down into Middle Super Output Area, which are smaller wards within authorities and home to around 7,000 people.

A weekly infection rate of 1,000 cases per 100,000 people means 1 per cent of the area’s population caught the disease in seven-days.

Kent became the first part of southern England to be thrust into Tier Three rules when they were put in place on December 2.

The toughest rules mean restaurants, cafes and pubs must close except for takeaways and people cannot meet with others except in parks or public open spaces, in maximum groups of six.

Cinemas, bowling alleys and ice rinks must close, but shops and hairdressers can remain open. Travel in and out of the area is advised against.

When Kent was put into Tier Three, rates in Swale and Medway were rocketing and they remain some of the highest in England now, at 673 and 640 positive cases per 100,000 people in the week to December 10 – a combined 2,793 positive tests.

But Tom Tugendhat, MP for Tonbridge and Malling to the south of Medway, is calling for a more local approach.

His entire constituency is in Tier Three but some areas have rates significantly lower than the England average, such as Hadlow & East Peckham and Tonbridge Higham Wood, which have seen only 13 cases each in the most recent week.

Mr Tugendhat said on BBC Radio 4 this morning: ‘We’ve got to look at communities within our country as relevant to the people living there and not simply blanket approaches across the entire county.

‘In a county like Kent which is 1.9million people, so over half the size of Manchester or about a quarter the size of London, treating it as a single entity is not entirely practical.’

He said breaking down even one constituency into smaller areas showed ‘distinct differences’ in outbreaks.

‘In some of the wards that I’m lucky enough to represent you’ll see zero cases of Covid at all,’ he added, ‘because this is still, sadly, very much more of an urban and metropolitan sickness than it is rural.

‘Many of the rural areas have much lower rates of infection because of population density and much lower travel between areas.’

MPs have made the same claims across the country, notably about Leicestershire in the House of Commons yesterday.

Leicester and some areas around it have never truly been freed from lockdown rules since the first wave ended in May, with some form of restriction having been placed on the city all year because of stubborn infection rates. The whole county is currently in Tier Three.

But MPs in some areas are frustrated by lockdown rules triggered by outbreaks in the city and suburbs.

Alicia Kearns, MP for Rutland and Melton, has pushed for her constituency to be ‘de-coupled’ from Leicester city, along with other areas, and Health Secretary Matt Hancock yesterday confirmed they would be considered in isolation.

Ms Kearns said in a tweet yesterday: ‘I’m grateful & relieved that @MattHancock today confirmed to me in the House of Commons that Leicestershire will be tiered separately to Leicester after weeks of concerted lobbying by myself & colleagues That doesn’t mean auto leave tier 3 as still have much work to do locally.’

She added: ‘If we remained tied to Leicester City, even if our rates plummeted we’d have to remain in the same tier as them. That won’t happen anymore thanks to my lobbying.’

Andrew Bridgen, MP for North West Leicestershire, wrote: ‘Matt Hancock just confirmed in the HoC the assurance he gave me at the weekend. Leicester and Leicestershire will be looked at separately. We are being decoupled from Leicester and should be in Tier 2 soon if infection rates remain low. Result’.

Department of Health data shows that infection rates vary across Leicestershire, with the highest numbers of cases in the city itself (256 per 100,000), Oadby and Wigston (256), Melton (225) – part of Ms Kearns’s constituency – and Blaby (218).

More rural parts of the county, however, have much lower rates of infection but face the same lockdown rules.

In Mr Bridgen’s constituency of North West Leicestershire, for example, the infection rate in the week to December 10 was half that of Leicester city, at 126, and it was up only seven per cent on a week earlier.

And in Charnwood the rate was 124 and falling, while it was 133 in Rutland – also in Ms Kearns’s constituency.

Broad brush tactics sweeping rural areas up in county-wide lockdowns triggered by outbreaks in towns and cities have angered MPs regularly since the tiering system began.

In a move that may reassure local officials, Matt Hancock indicated in the Commons yesterday that the Government and Joint Biosecurity Centre would be willing to consider splitting counties to make rules fairer.