Boris Johnson’s is set to delay his paternity leave as he scrambles to get a grip on the coronavirus crisis, it was revealed today.

But Downing Street has signalled that Mr Johnson will not go on leave until later in the year, with the country currently in the throes of the deadly disease outbreak.

There were concerns over a power vacuum when Mr Johnson was hospitalised, and then spent two weeks recuperating at Chequers.

He only returned to Downing Street on Monday, making a speech on the steps of No10 and taking charge of the daily ‘War Cabinet’ meetings.

In his absence there were signs of splits among senior ministers over how and when to ease the lockdown inflicting massive damage on the economy.

Downing Street has signalled that Boris Johnson (pictured with Carrie last month) will delay his paternity leave until later in the year, with the country in the throes of the coronavirus crisis

What are the parental leave rules?

As an office-holder rather than an employee, the PM is not officially covered by the parental leave rules.

However, many politicians have opted to follow the provision available for other workers.

Parents can take one or two weeks after their partner has a baby.

It must be taken all in one go.

Alternatively parents can share up to 50 weeks of leave, and up to 37 weeks of pay, between them.

‘Hawks’ such as Chancellor Rishi Sunak were believed to have been pushing for an earlier easing to avoid huge job losses, while ‘doves’ including Health Secretary Matt Hancock advocated a more cautious approach.

First Secretary Dominic Raab ‘deputised’ for Mr Johnson while he was off, but he was said to have acted as a facilitator of debate in Cabinet rather than forcing decisions.

Mr Raab stood in for Mr Johnson at PMQs this afternoon.

But Downing Street said Mr Johnson was already back at work.

‘The PM was with Ms Symonds this morning for the birth of his son and is now back at work in Number 10,’ a spokesman said.

‘Later in the year he will take a short period of paternity leave.’

‘He has got huge decisions right now. He is the only one really who can make these decisions,’ Mr Duncan Smith said.

‘These are unprecedented times and not to be in Downing Street again would leave us somewhat rudderless.’

Mr Johnson and Ms Symonds made history as the first unmarried couple to officially live together in Downing Street when they moved in last year.

Rumours had been swirling all morning about Mr Johnson’s absence from PMQs.

Downing Street had refused to say whether the premier would be in the Commons for the regular session, which would have been his first since recovering from illness.

It was not clear whether he was still not up to an hour of intensive grilling from MPs, but Ms Symonds’ pregnancy was also the source of speculation. 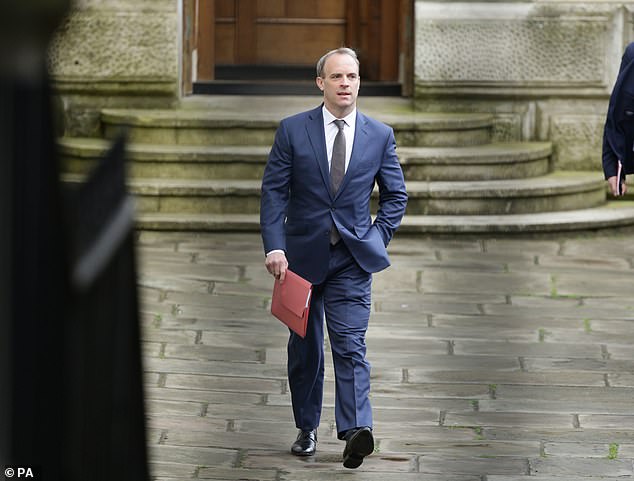 First Secretary Dominic Raab ‘deputised’ for Mr Johnson while he was off, but he was said to have acted as a facilitator of debate in Cabinet rather than forcing decisions 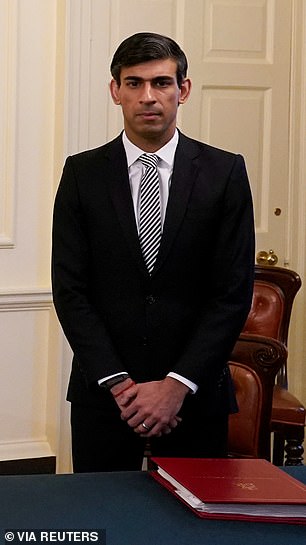 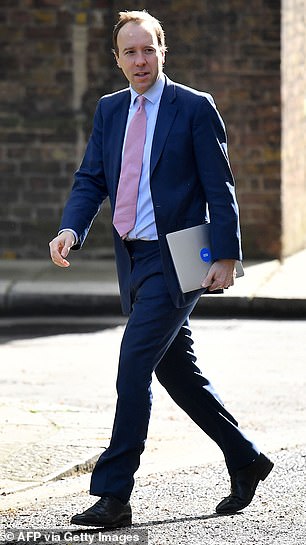 There have been claims of Cabinet splits between ‘hawks’ such as Chancellor Rishi Sunak (pictured left in No10 yesterday) pushing for an earlier easing of lockdown, and ‘doves’ including Health Secretary Matt Hancock (pictured right in Downing Street today) advocating a more cautious approach

Mr Johnson previously said he would take paternity leave, but Downing Street sources have been making clear that will be put off while the country is in the grips of coronavirus turmoil.

It is understood the PM was by his 32-year-old fiancee’s side throughout the birth, which took place at an NHS hospital in London.

Labour leader Sir Keir Starmer, who would have been up against the PM for the first time this afternoon, tweeted: ‘Wonderful news. Many congratulations to Boris Johnson and Carrie Symonds.’

The PM and Ms Symonds both suffered from coronavirus, and have spent some time recuperating at Chequers.

There were concerns about Ms Symonds as doctors were not sure if pregnancies might be at risk from the virus, but she is understood to have made a good recovery.

The happy news comes as something of a surprise, with Ms Symonds having been expected to give birth in the summer, although a due date was never confirmed by the couple.

A spokesman for the couple said today they were ‘thrilled’ to announce the birth which took place early this morning, adding: ‘Both mother and baby are doing very well.’