Boris Johnson calls on the nation to ‘roll up our sleeves’ and clean up the rubbish discarded during the lockdown.

The Prime Minister is throwing his weight behind a fight against litter being backed by the Daily Mail.

Pubs and restaurants being closed for months has led to parties in parks, on beaches and at beauty spots. Plastic and waste have piled up in areas of natural beauty after callous visitors tossed their rubbish aside.

Prime Minister Boris Johnson (pictured left) has called on the British public to undergo a post COVID-19 clean-up and has hailed the relaunch of the Mail’s great litter pick, ‘The Great British Spring Clean’ which was postponed due to the COVID-19 crisis 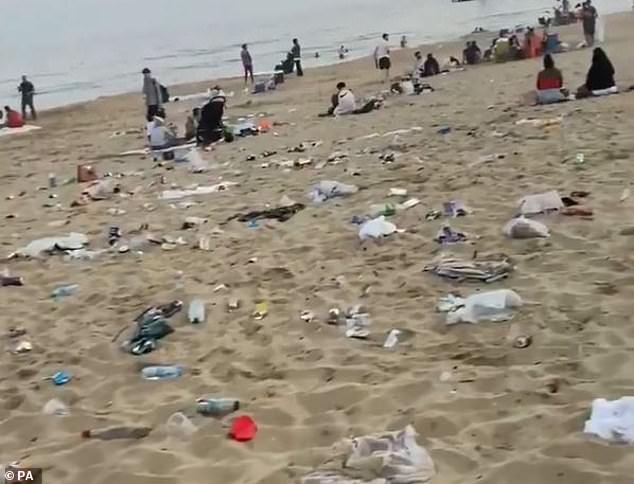 The Great British Spring Clean, run by Keep Britain Tidy and backed by the Mail, was postponed because of the coronavirus pandemic.

But the Prime Minister urges you and your family to do your bit – and restore landmarks to their former glory.

Renamed the Great British September Clean, the campaign is again encouraging everyone to hit the streets, parks and beaches in the fight against litter.

Mr Johnson said: ‘During the lockdown we have all felt more keenly the need to spend time outside, but with that we have sadly seen more litter spoiling our parks and open spaces.

‘This is a blight on communities and our otherwise beautiful countryside, and so I wholeheartedly support the Mail’s public-spirited campaign.

‘While continuing to follow social distancing rules, we can all play our part by rolling up our sleeves and joining in the Great British September Clean.’ 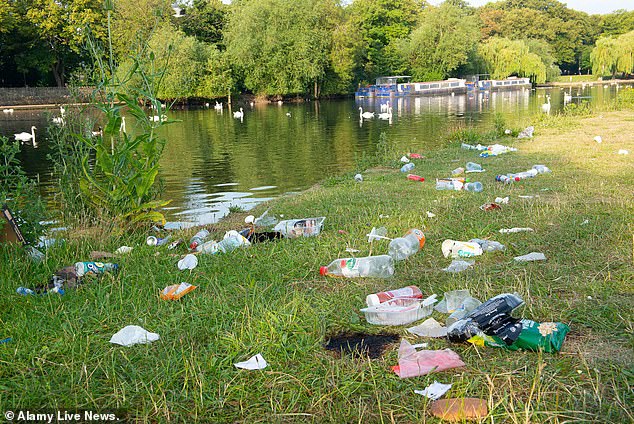 Several British hotspots, such as the Brocas in Windsor near the River Thames (pictured) have been covered in litter left behind by callous visitors 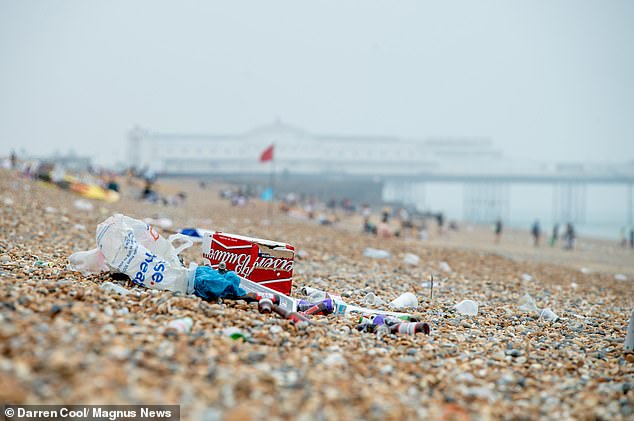 Pubs and restaurants being closed for months has led to parties in parks, on beaches (pictured) and at beauty spots, resulting in the piling-up of plastic and waste

The Mail has mounted a litany of successful environmental campaigns in the past. This newspaper’s Turn the Tide on Plastic, Be a Tree Angel, and Curb the Cups movements have helped bring real change to Britain’s landscapes by winning the war on waste.

We also successfully pressed for the plastic bag levy that has slashed the number going to landfill and generated millions for charity.

A spokesman for Keep Britain Tidy said: ‘We really appreciate the Prime Minister’s recognition of the value of our precious outdoor spaces and the need to look after them.

‘As he says, let’s stay safe, roll up our sleeves and get stuck in to cleaning up our beautiful country.’ 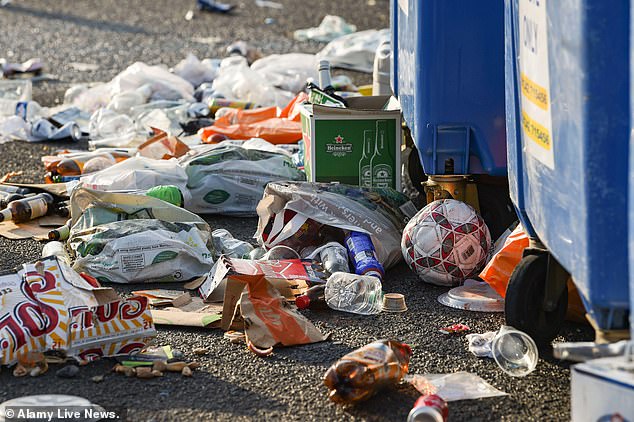 The Prime Minister has approved the Mail-backed ‘Great British Spring Clean’ which will run from September 11 to 27 – encouraging everyone to hit the streets, parks and beaches in the fight against litter

After seeing its scenic gardens tarnished by selfish revellers during the lockdown, the National Trust has also come out in full force to support the Great British September Clean.

The trust, which owns more than 500 heritage properties, gardens and sites, has had staff and volunteers clearing up litter throughout the pandemic.

It said the amount of waste left at some sites had been ‘on another scale’ and it was wholeheartedly backing the push to make Britain beautiful again.

The trust also warns the rubbish strewn across its land is having a grave effect on local fauna, who become injured or even killed by litter.

Rob Rhodes, head of countryside management and rangers, said: ‘We work hard to keep our properties, countryside and coastline clean and tidy, but litter continues to be a real challenge. Lately, the amount of rubbish being left at some sites is on another scale.

‘Last week our teams at Studland Beach spent the best part of a day clearing up barbecues, tents, clothing and food and drink waste which had been left strewn across the sand.

‘Litter not only spoils the landscape but poses a threat to wildlife, which can easily become entangled or mistake it for food.

‘We’re pleased to support the Great September Spring Clean which is tackling this important issue and inspiring people wherever they are to make a difference to their local environment.’

The trust has emailed its 5.5 million members, encouraging them to get involved. 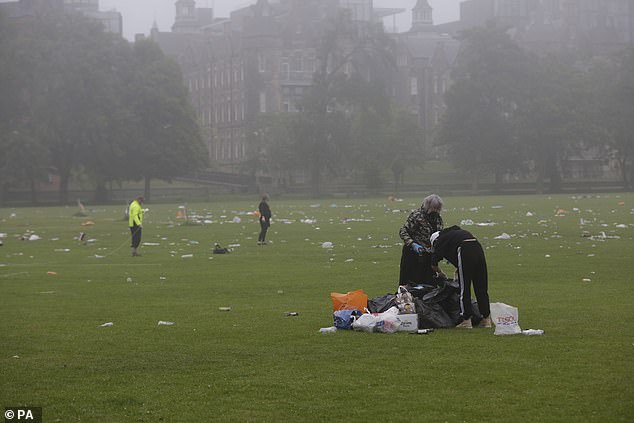 Whether it’s picking up a piece of litter on the way home from the shops, or going out in a small group to help clean up a small area, the Mail wants you to get involved

Chief executive Hilary McGrady said: ‘We know from our research that people who spend time in nature are more likely to look after it in the future.’

The Wombles of Wimbledon Common have even come out of hibernation to encourage everyone – especially children – to get involved in the fight against litter. Earlier this year the characters were given a CGI makeover as part of a relaunch that aimed to inspire young environmental enthusiasts.

‘We are delighted to supporting the September Clean,’ Orinoco said. ‘We have been incredibly busy in recent weeks tidying up after the humans but there is only so much we Wombles can do.

‘This is why we would like to encourage everyone, young and old, to join in and help tidy up our wonderful parks, beaches and countryside – at an appropriate social distance of course.

‘If we all behave like Wombles, we can make our world even more beautiful.’

Whether it’s picking up a piece of litter on the way home from the shops, or going out in a small group to help clean up a small area, we want you to get involved.

The Great British September Clean will run from September 11 to 27.

For more information, or to pledge your support, visit keepbritaintidy.org/gbseptemberclean

In a sad example of the danger litter poses to animals, cows nose around rubbish overflowing from a bin after a slew of drinks bottles, cans and takeaway packaging was left behind by thoughtless revellers.

The animals were seen eating some of the items left behind at Sheep’s Green, Cambridge, yesterday – less than a mile from where another cow died after suffocating on a plastic carrier bag. 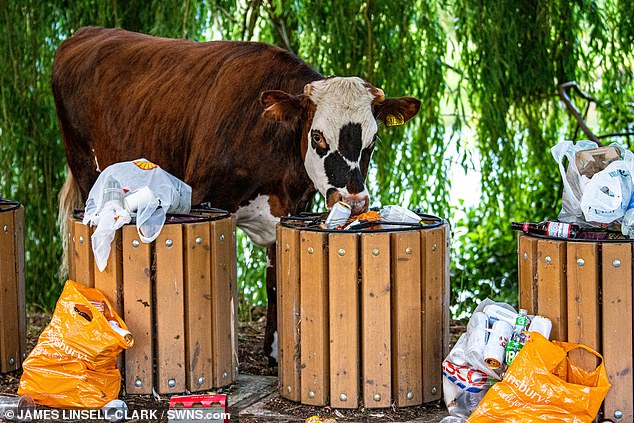 That death happened at the beginning of June, in Grantchester Meadows. A post-mortem examination on the cow found it had swallowed the bag.

Farmer Angelika von Heimendahl said the death was ‘very sad’ and ‘not a nice way to die’.

She added: ‘Humans impose their lifestyles and other creatures have to deal with it.’

In another worrying example, last month volunteers in East Yorkshire had to try to shoo away a herd of cows which started eating litter left behind at Westwood Park, Beverley. 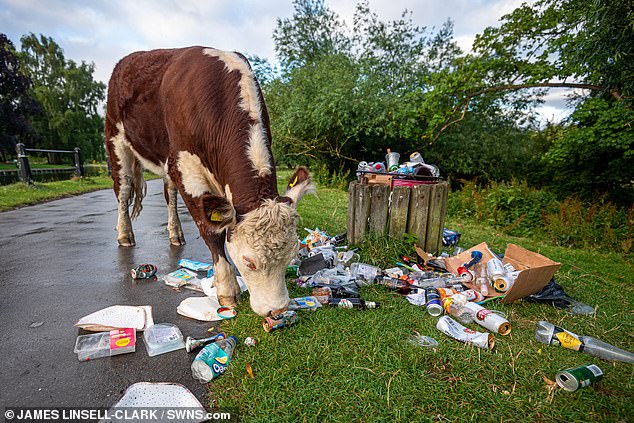 HOW YOU AND YOUR FAMILY CAN HELP

What is the Great British September Clean?

The Great British September Clean is, in fact, the postponed Great British Spring Clean, which had to be mothballed in March when the country went into lockdown.

How can I get involved?

Anyone who wants to take part can do so by registering via the Keep Britain Tidy website at keepbritaintidy.org

When is it taking place?

The campaign will run from September 11 to 27 but you can pledge to start now if you want.

What can I do?

You can pledge to litter-pick either by yourself or with those you live with. Whether you do five minutes or five hours, every individual can make a difference.

You can also organise a small clean-up for you and up to five other people and register it on the website.

You will be able to access resources, including a detailed ‘how to’ guide that will explain how to do a clean-up safely and what to do with the rubbish you collect.

Is it safe to do a litter-pick currently?

Do not touch the litter you collect and make a special effort not to touch your face while litter-picking.

If you are litter-picking alone and have only a small amount of rubbish, just pop that in your own household bin.

You could separate out plastic bottles and aluminium cans into your recycling bin but, again, use your litter-picker.

If you find you have too much rubbish, you will be able to find details of contacts at your local council – if they are involved with the campaign – on the Keep Britain Tidy website. They will tell you where to leave the rubbish you’ve picked up for collection.

How should I do a litter-pick with people I don’t live with?

You should not litter-pick with more than five other people, in line with the latest Government guidelines at time of going to press, and you must observe social distancing — a good guide is to stay a litter-picker length away from each other.

All the health and safety information you need is available on the Keep Britain Tidy website at keepbritaintidy.org when you register. Everyone taking part must be wearing gardening-type gloves and must use a litter-picker and wash their hands – and the equipment – thoroughly afterwards.

Contact your council beforehand to tell them what you’re doing and where, and to arrange for the rubbish you pick up to be collected.

You will find details for councils who are supporting the campaign on the website.

If you live in Wales or Scotland, please follow the appropriate guidance.

How can I get equipment?

All you need to start litter-picking is some gardening-type gloves, a litter-picker and a rubbish bag. A lot of local authorities are supporting the Great British September Clean and their details are on the website when you register. They may be able to lend you equipment.

If you just want to do something yourself, you can also get affordable litter-pickers from various online retailers.

Are there any clean-up events I can go to?

No, with the restrictions currently in place, there will not be any public events that individuals can join, so if you want to ‘do your bit’ please pledge via the website, then you can be part of the pick and stay safe as well.

Or you could simply organise something with your friends and neighbours and register on the website.

Will there still be a Great Big School Clean?

No, but schools who want to and are able to take part in the Great British September Clean will be able to do so. They can register via the Keep Britain Tidy website, keepbritaintidy.org