Hotline to a Brexit deal: Boris Johnson and Ursula von der Leyen hold regular secret phone calls as they try to nail down a compromise on fishing

By Jason Groves and James Franey For The Daily Mail

Brexit negotiators are making a ‘final push’ for a deal today as they close in on a compromise over fishing.

Government sources confirmed that Boris Johnson has established a ‘hotline’ to European Commission chief Ursula von der Leyen as the two sides try to thrash out a deal before Christmas.

The pair are understood to have held regular secret phone calls in the last 48 hours.

Mrs von der Leyen is also said to have established back channels to German Chancellor Angela Merkel – the EU’s powerbroker – and French President Emmanuel Macron, who is seen in Downing Street as the main obstacle to a deal.

Diplomatic sources said the EU’s chief Brexit negotiator Michel Barnier had not even been aware of the content of secret talks between the Prime Minister and Mrs von der Leyen on Monday night – suggesting he is becoming increasingly sidelined in the final days of negotiations.

In a bid to break the deadlock, the Prime Minister’s chief negotiator David Frost has tabled a new offer on fishing that would allow EU trawlers to keep more of the fish they currently catch in UK waters.

Mr Barnier yesterday told EU ambassadors that the offer was ‘unacceptable’. But Mrs von der Leyen is said to be leaning on Mr Macron and the leaders of other coastal states to accept the deal.

Arriving for the meeting with EU ambassadors yesterday, Mr Barnier told reporters: ‘We are really in a crucial moment and we are giving it a final push. In ten days, the UK will leave the single market.’

According to a diplomatic note seen by the Mail, Mr Barnier later told MEPs that a compromise on fishing would have to be decided by political leaders.

‘We haven’t reached an agreement on fisheries, despite the talks,’ he said. ‘There are subjects that I can’t resolve – only a few which are very political and very sensitive matters – but I can’t resolve them at my level.

‘It is normal at this stage that there are subjects that need to be dealt with by President von der Leyen at her level with Boris Johnson.’

The Prime Minister has told allies that he has made significant compromises in recent days, including on fishing. But he has warned that he will not go further without movement from the EU. ‘If Macron digs his heels in then there will be no deal,’ said one source. 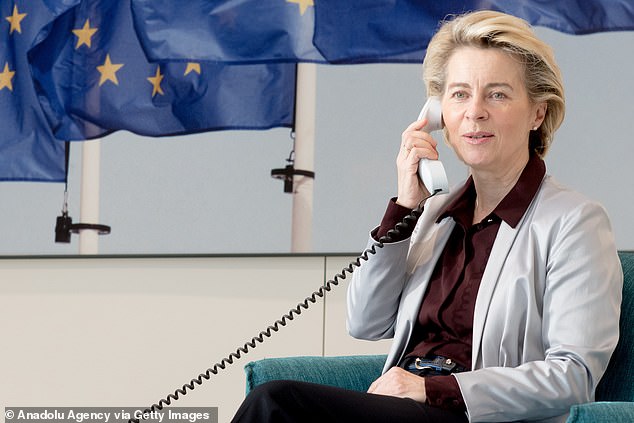 Mrs von der Leyen is also said to have established back channels to German Chancellor Angela Merkel – the EU’s powerbroker – and French President Emmanuel Macron, who is seen in Downing Street as the main obstacle to a deal

Differences are also said to remain on the issue of state subsidies, where the EU is still pushing demands which British negotiators describe as ‘unbalanced’. Brussels wants the right to penalise the UK if it uses subsidies to enable British firms to undercut EU rivals. But it is so far refusing to accept the same arrangements for unfair EU subsidies.

Reports claimed that the latest British offer on fishing would involve the EU sacrificing around 35 per cent of its share of quota in UK waters over a five-year period.

Human rights meddlers back off

The European Court of Human Rights declared the UK broke its rules in just two cases in 2018 and five last year.

It contrasted strongly with the years before 2016 which saw repeated interventions into British law in areas including the treatment of terrorists.

Dr David Green, a former Home Office adviser who heads the Civitas think tank, said: ‘Public opinion turned against outside institutions in the Brexit referendum. I would guess Strasbourg judges took account of that. They’ve backed off.’

The figures were given by the Ministry of Justice to the Joint Committee on Human Rights.

Major clashes between Strasbourg and Westminster happened in 2005 when judges ordered Britain to give the vote to convicted criminals.

The Strasbourg court is separate from the EU but EU member countries are required to join.

It is a big compromise on Lord Frost’s original demand that the EU hand back 60 per cent over three years. But it is much more than Mr Barnier’s offer to hand back just 15 per cent over ten years.

Downing Street disputed the precise details of the reported offer yesterday, but acknowledged there was ‘a lot of back and forth’ on fishing. At one point, officials believed there was a chance of a major breakthrough yesterday afternoon.

But sources last night said talks looked set to continue, possibly right up to December 31, when the Brexit transition ends. One insider suggested there could even be a deal struck on Christmas Day.

Mr Barnier yesterday said talks could continue to ‘the end of the year and beyond’.

But UK sources said the PM had ruled out continuing negotiations beyond the end of this year. A British official said: ‘We’ve clearly set out the reasons that we will not extend the transition period. It would bind us into future EU legislation, without us having any say in designing it, but still having to foot the bill.

‘We need to provide certainty to our citizens and businesses as soon as possible.’ Mr Barnier confirmed to MEPs he had made a ‘final offer’ at the weekend to hand back 25 per cent of quota. He said the latest UK proposal was ‘very far from that’.

Eurosceptic Tories underlined the narrow room for compromise Mr Johnson enjoys as he tries to secure a deal that would avoid the imposition of tariffs on January 1.

He said: ‘Our fisheries are a huge national resource… which has the potential to support many thousands of jobs.’

Former environment secretary Owen Paterson said ‘taking back full control of our waters’ was a symbol of whether ‘we run our own country or not’.