Prince Charles and his brother Andrew reportedly inspired a backstairs coup to oust the Queen’s most senior courtier in July 2017, just four months before Prince Harry and Meghan were due to become engaged.

Sir Christopher Geidt, then 56, had provoked the Prince of Wales with a speech to around 500 royal staff announcing Prince Philip’s retirement.

The experienced strategist, who had earlier worked in Army intelligence, had also forced Andrew to step down as UK Trade Ambassador in 2011 over his friendship with convicted sex offender Jeffrey Epstein.

He also managed Andrew’s expenditure and had blocked some of his helicopter and private jet excursions.

Based in Buckingham Palace, the Queen’s private secretary could be described as the COO — chief operating officer — of ‘The Firm’ and had run the royal show sensitively for around a decade, reported the Daily Mail.

Queen Elizabeth II, then 91, gave in to her son’s demands. One courtier commented that, at such an age, ‘you don’t want the hassle of having a big fight, do you? Isn’t it better that everything calms down?’

An extremely senior and distinguished court correspondent condemned the decision, labelling it as the ‘one of the most shameful, and frankly shabby’ moves that the Queen has made in her entire reign.

The correspondent added: ‘All Geidt wanted was to have everyone singing from the same hymn sheet, but that is not Charles’s agenda any more.’

He was succeeded by Sir Edward Young, who sanctioned Andrew’s use of Buckingham Palace for his disastrous Newsnight interview in November 2019 and allegedly clashed with Meghan.

‘As things started to go wrong,’ said someone who watched the new Duchess’s relationship deteriorate with the private secretary, ‘Meghan came to perceive Young as the inflexible, bureaucratic figure who summed up what was at fault with the palace mentality, and the feeling was mutual. 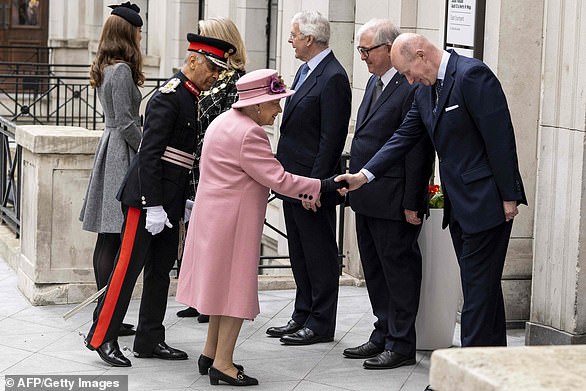 The Queen is seen greeting Lord Geidt on her arrival with the Duchess of Cambridge to visit Kings College, central London, in March 2019

One veteran royal analyst said: ‘Geidt would have put on his thinking cap.

‘He would have reflected on the big picture — what it meant to the monarchy and Britain as a whole.

‘He would have talked to the couple to ask them what they wanted to do, then come up with some defined strategy.

‘He would have looked at our multi-racial country and got them committed to some exciting new initiative — Meghan as a newcomer and Harry as a wavering team-member — so they felt pledged to the way ahead and could see how its success required them to stick at the job.’

In early 2019, it was announced that the Queen had decided to return Geidt to her side as her Permanent Lord-in-Waiting.

The move came amid a new strategy to integrate the young Duchess more fully into royal life — ‘Lord Geidt will be Her Majesty’s eyes and ears,’ said a courtier.

The former private secretary and the Queen sat down to frame a plan with Sir David Manning, a former ambassador to the US, to get Harry and Meghan out of the country for a ‘decent spell’.

The Queen wanted to offer the couple a role in her British Commonwealth of Nations, potentially in South Africa. It is not clear why the move broke down.

A palace insider said: ‘There were obviously points of principle to defend, but Edward got stuck in the detail. He could not see the bigger picture.

‘This sort of family negotiation requires trust, along with the accepting of uncertainties and ambiguities. There can be no absolute guarantees for either side.

‘Christopher Geidt would have handled it so differently — he had the skills. Geidt might even have landed that classic royal compromise in which nobody loses.’