Michelle Hicks, 48, from Derbyshire, as struck by a severe asthma attack at Bonfire Night three years and is still living with the effects today

A mother-of-three struck by a severe asthma attack on Bonfire Night three years is still battling the after-effects today.

Michelle Hicks, 48, from Derbyshire, had to go to hospital after suffering a flare-up in 2019.

She is still left unable to get out of bed some mornings and reducing how much she moves or talks now in case she has another attack.

Doctors diagnosed her with with a breathing pattern disorder they believe was brought on by the medical episode.

Her children, Beth, 21, and twins Jake and Isaac, 10, also have asthma, so November 5 is always a worrying time of year for her.

Michelle said: ‘Smoke is a major trigger for me and ever since I had an asthma attack following a bonfire display three years ago, my asthma has been so bad at times I’ve been unable to wash or dress myself because I get so breathless.

‘I was at a firework display with my children and suddenly I felt my chest tightening up and became breathless.

‘It was a struggle for me to get myself home and the next day I was still finding it so hard to breathe that my husband Marcus had to call for an ambulance.’

Michelle spent a day in hospital recovering from the asthma attack and was later diagnosed with a breathing pattern disorder — when the body can suddenly start hyperventilating, causing a higher level of stress.

She says her respiratory physiotherapist told her it was likely to have been caused by the asthma attack. 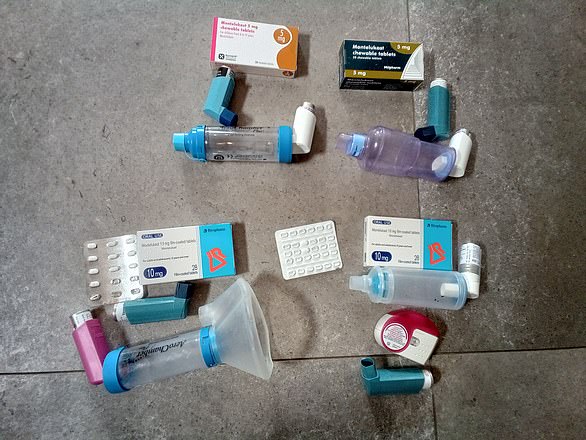 Pictured: The inhalers and medication used by Ms Wainwright-Hicks and her children Beth, 21, and twins Jake and Isaac, ten,

‘I dread Bonfire Night and am on a knife’s edge around this time of year,’ she added.

‘My asthma used to be reasonably well controlled, and I was able to cycle, go walking, play, laugh, and have fun with my family.

‘After the attack in November 2019, I was left completely debilitated. Some days I felt so ill and breathless I was unable to get out of bed.

‘Throughout 2020, there were times I could only walk very short distances, found it difficult to talk, and couldn’t carry anything.’

She added: ‘I had several more asthma attacks and stays in hospital that year, and even now I still feel the effects of it.

‘I have to moderate how much I move or talk, and on bad days our children aren’t even allowed to make me laugh in case it brings on an asthma attack.

‘I know that some people with asthma can enjoy firework displays without having an asthma attack, but for me that one Bonfire Night has had a terrible long-term impact, and I want to make people aware of the risks.’