One of three men accused of planting a car bomb that killed Maltese anti-corruption journalist Daphne Caruana Galizia in 2017 dramatically pleaded guilty Tuesday and was sentenced to 15 years in jail.

Vincent Muscat received a relatively lenient sentence after the judge said he had cooperated with police in the case that had rocked the Mediterranean island nation.

The murder of Caruana Galizia, who exposed cronyism and sleaze within Malta’s political and business elite, sparked international outrage and protests that forced prime minister Joseph Muscat to resign.

Two alleged co-conspirators are still awaiting trial over the October 16, 2017 attack, while a businessman, Yorgen Fenech, is also awaiting trial for allegedly masterminding the murder.

In a statement read out by their lawyer, Jason Azzopardi, the victim’s family expressed their “hope that this development will begin the road for total justice for Daphne Caruana Galizia”.

The 53-year-old’s murder “destroyed her right to life and removed her right to enjoy her family and grandchildren who were born after her murder”, he said.

The lawyer added: “I say all this because if Daphne’s family were to respond today with all the emotions, it would be obvious as to what their reply would be.”

Vincent Muscat and brothers George and Alfred Degiorgio, all in their fifties at the time, were arrested in December 2017 for carrying out the murder, and charged in July 2019.

In a pre-trial hearing on Tuesday, Muscat’s lawyer Marc Sant informed the court that his client wanted to register an admission. 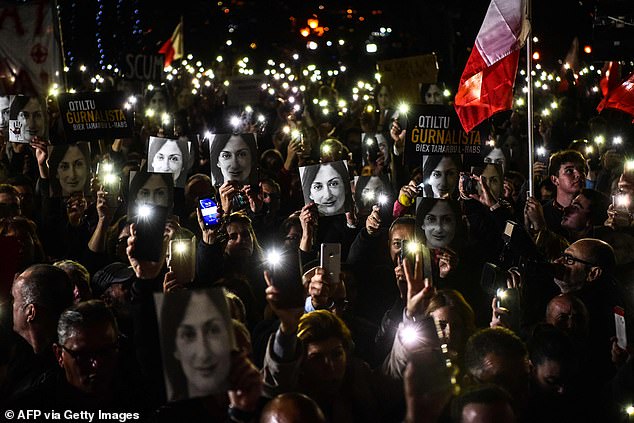 People holding placards and photos of killed journalist Daphne Caruana Galizia stage a protest called by Galizia’s family and civic movements outside the office of the prime minister in Valletta, Malta in 2019

When asked how he wanted to plead, Muscat replied: “Guilty.”

But Muscat repeated that he pleaded guilty of charges including murder, possession of explosives, placing the bomb, and criminal conspiracy.

He was sentenced just hours later to 15 years in prison, in a deal with the prosecution in which he renounced his right to appeal. He must also pay 42,930 euros in court expenses.

Caruana Galizia, who has been described as a “one-woman WikiLeaks”, was known for investigating high-level corruption, including contributing to the 2016 Panama Papers data leak.

She was killed in a car bomb targeting her vehicle not far from her home in the north of the island.

One of her sons accused Prime Minister Muscat of being complicit and turning Malta, a former British colony that joined the European Union in 2004, into a “mafia island”. 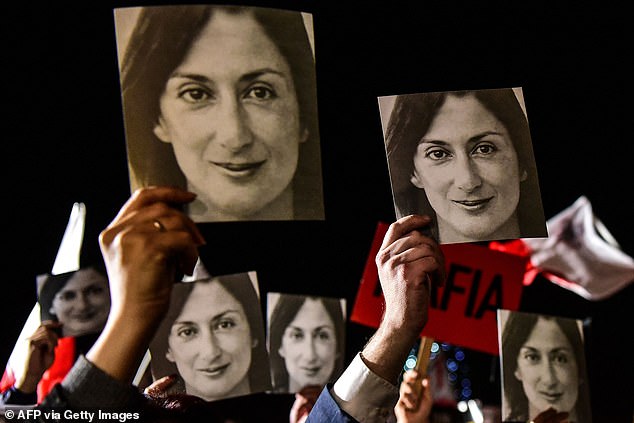 Muscat stepped down in January 2020 after the investigation into the murder implicated some of his closest collaborators.

Muscat’s chief of staff, Keith Schembri, and his tourism minister, Konrad Mizzi, had both been accused by Caruana Galizia of being involved in corruption – which they denied.

Fenech is currently awaiting trial for being the mastermind.

The owner of a Dubai company, 17 Black, on which Caruana Galizia had reported, he was arrested in November 2019 as he was sailing away from Malta on his yacht.