The mayor of Brazil’s worst-hit city has described the hundreds of coronavirus deaths in Manaus as ‘a scene out of a horror movie’ as bodies are piled up in refrigerated trucks and bulldozers dig mass graves at cemeteries.

Mayor Virgilio Neto said his city was ‘no longer in a state of emergency but rather of absolute calamity’ after the daily death rate shot up from 20-30 per day to more than 100 because of the pandemic.

The city has the highest death rate of any state capital in Brazil and the mayor fears there are more hidden deaths because people are dying at home without medical care.

The pandemic has also reached extremely vulnerable indigenous communities in the state of Amazonas, which is so huge it can take days of travel by boat to reach outlying towns and villages.

Brazil’s president Jair Bolsonaro has downplayed the virus as a ‘little cold’ and demanded an end to lockdown measures, but the country now has more infections (45,000) and deaths (2,900) than any other in Latin America.

An aerial view of the Parque Taruma cemetery in Manaus, where a new section of the graveyard houses the bodies of confirmed and suspected coronavirus victims 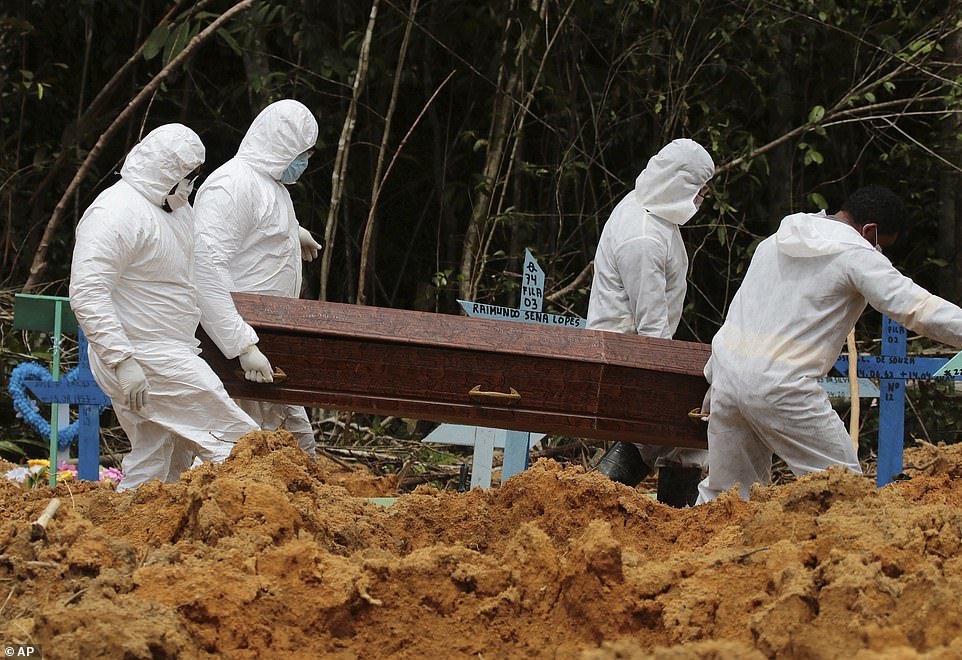 Funeral workers in protective gear carry the coffin of Nicolares Osorio Curico, who his relatives say died of the coronavirus disease, at the Nossa Senhora Aparecida cemetery in Manaus 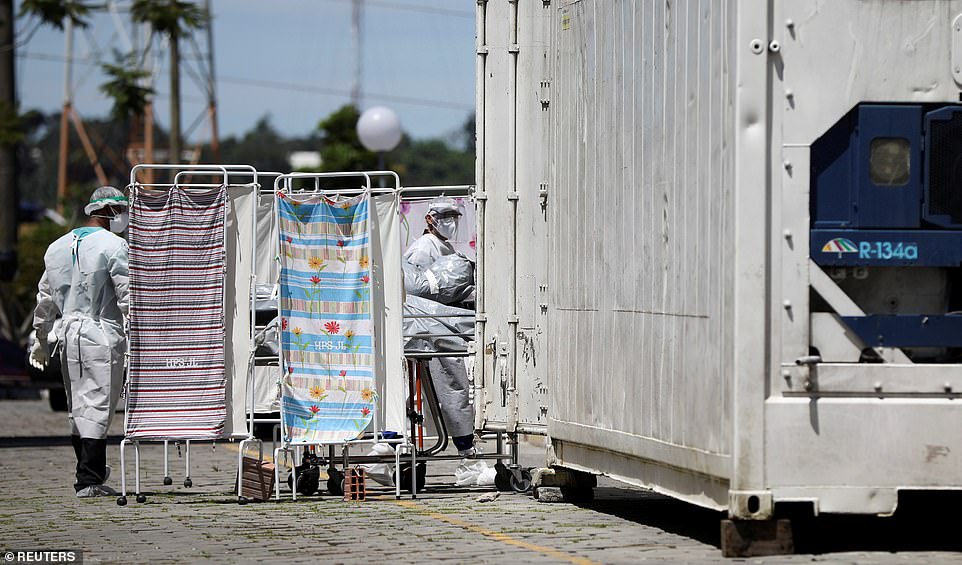 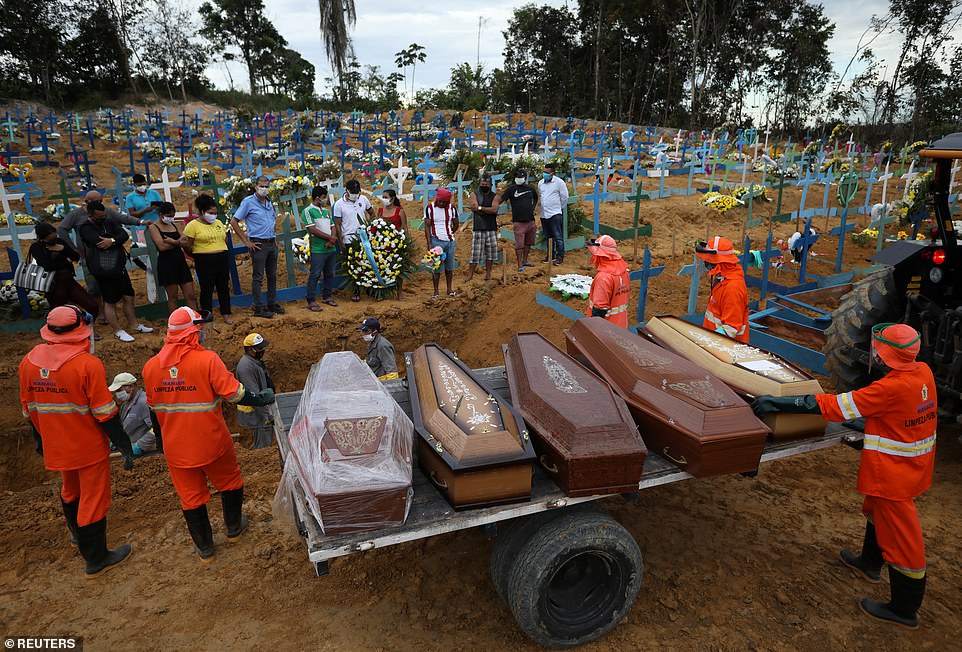 A collective burial of people that have passed away due to the coronavirus disease (COVID-19), is seen at the Parque Taruma cemetery in Manaus, Brazil

Amazonas is one of Brazil’s hardest-hit states, with 2,479 cases and 207 reported deaths as of Tuesday. Public health experts say the figures could actually be 15 times higher in reality because of scant testing.

Hospitals in Manaus are struggling to cope with the rising number of cases. Some have set up refrigerators inside trucks to store bodies.

Outside the Delphina Rinaldi Abdel Aziz Hospital, Rita Alencar is waiting for someone – anyone – to tell her if she can collect the remains of her grandmother.

‘No one has come to give me an answer as to whether I can take her away and bury her. She did not die of Covid-19,’ Alencar said.

At a cemetery called Parque Taruma, crews are digging holes in the earth to make mass graves for coronavirus victims. On orders from the mayor, no more than five relatives can gather to say a quick goodbye.

‘We are working hard to bury people. We have had gravediggers fall ill with coronavirus. Some will not make it,’ said the mayor, who has asked the Bolsonaro government for more resources to tackle the crisis.

‘This is a really, really tough fight,’ said Neto. 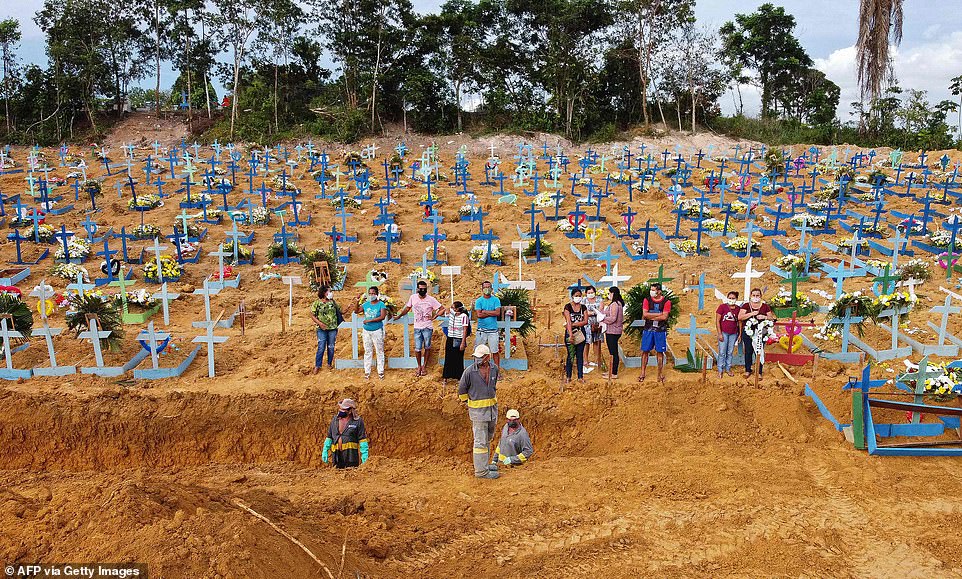 A burial taking place, attended by mourners and funeral workers in face masks, at an area where new graves have been dug at the Nossa Senhora Aparecida cemetery in Manaus 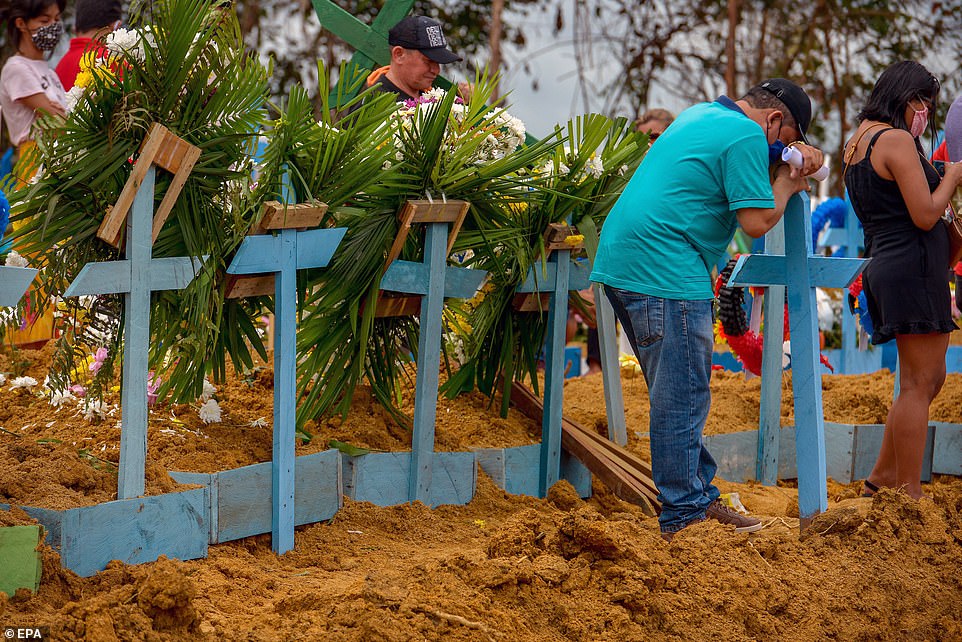 Relatives mourning for their loved ones during a collective burial of COVID-19 victims in the Nossa Senhora de Aparecida cemetery, in Manaus 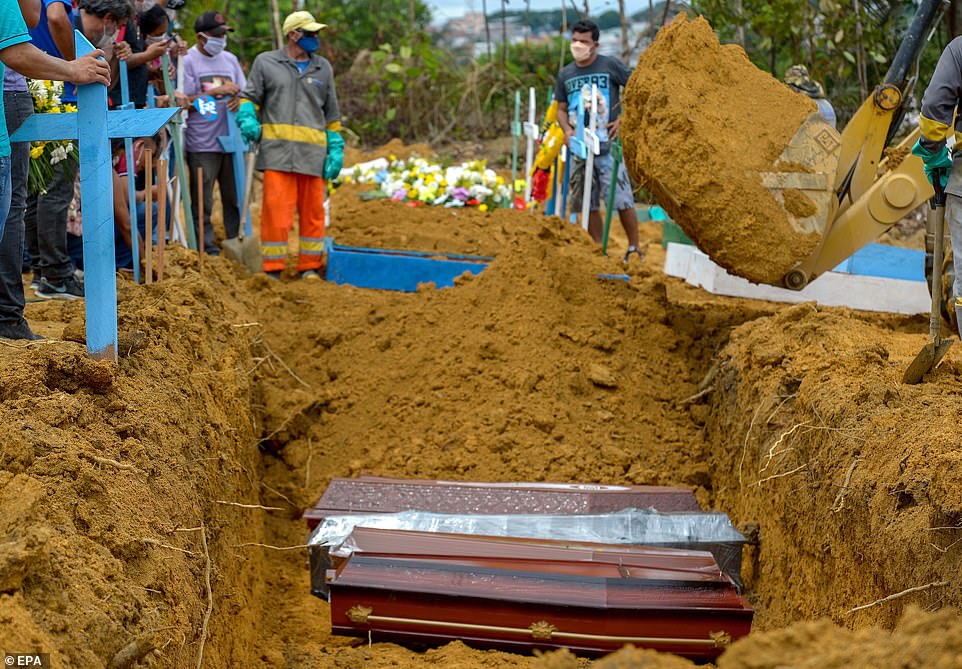 A series of coffins lie in a newly-dug grave at the Nossa Senhora de Aparecida cemetery in Manaus, which has the worst death rate of Brazil’s state capitals 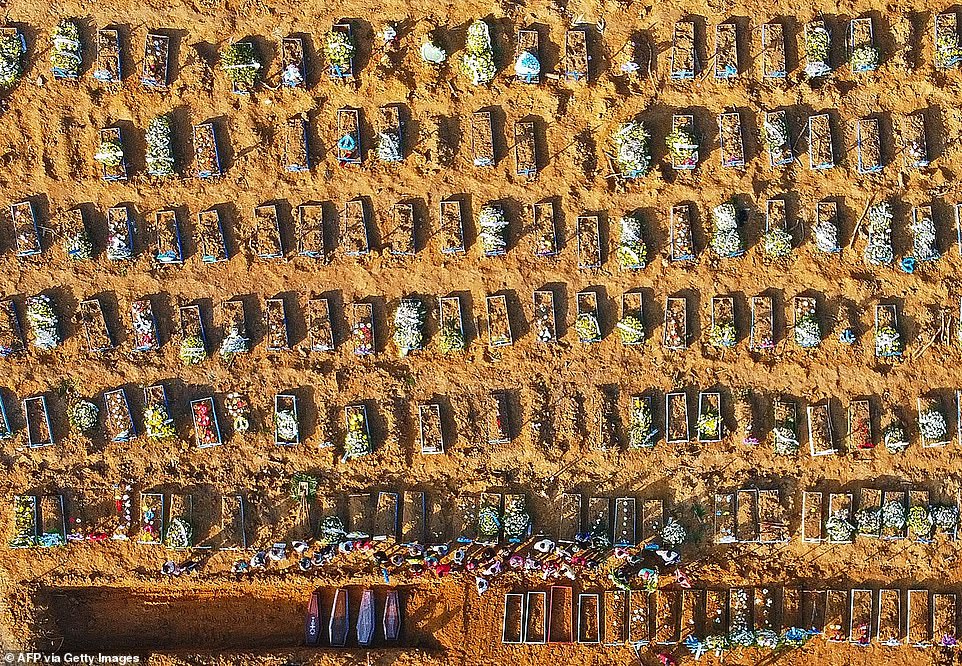 An aerial view of the Parque Taruma cemetery, with a new trench in place at the bottom of the picture where coffins of coronavirus victims are being buried 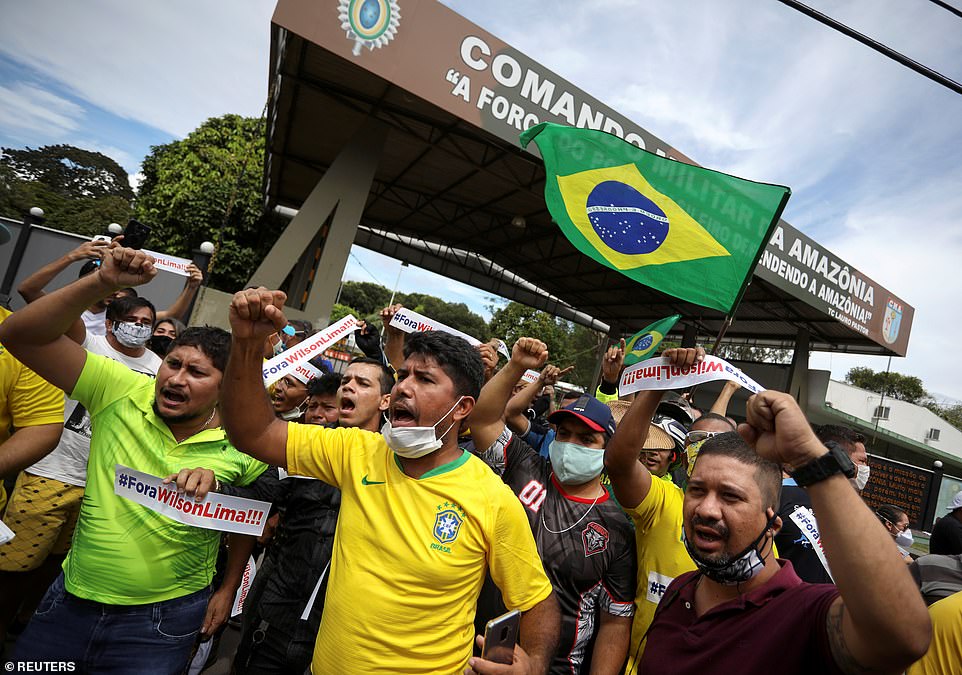 Supporters of Brazilian president Jair Bolsonaro protest against the social isolation measures imposed by the Governor of Amazonas, Wilson Miranda Lima, at a demonstration in Manaus on Sunday 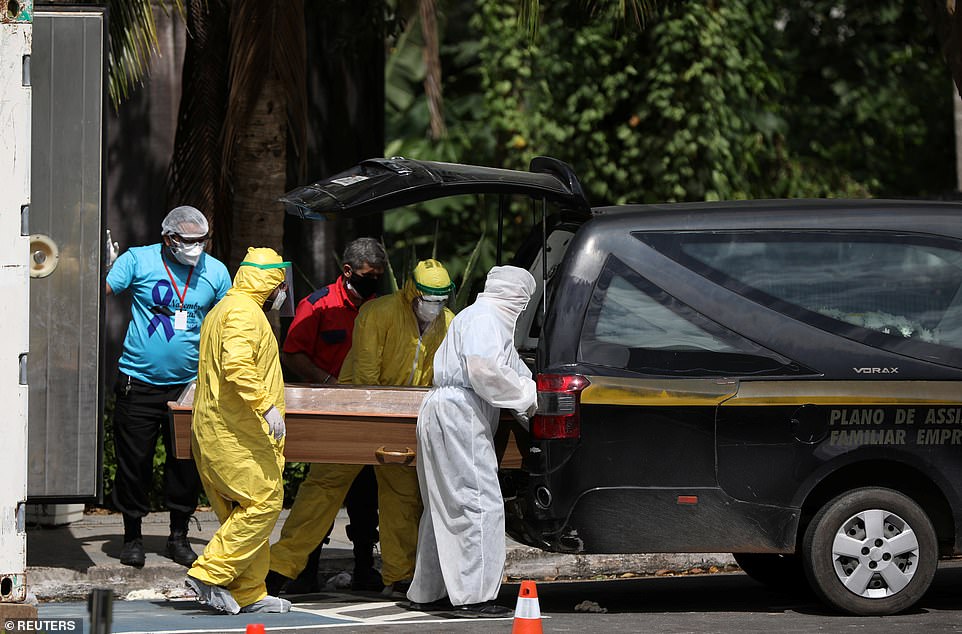 Mortuary employees wearing protective gear transport the body of a person from a refrigerated truck to a funeral service vehicle at the Dr. Joao Lucio Pereira Machado hospital in Manaus 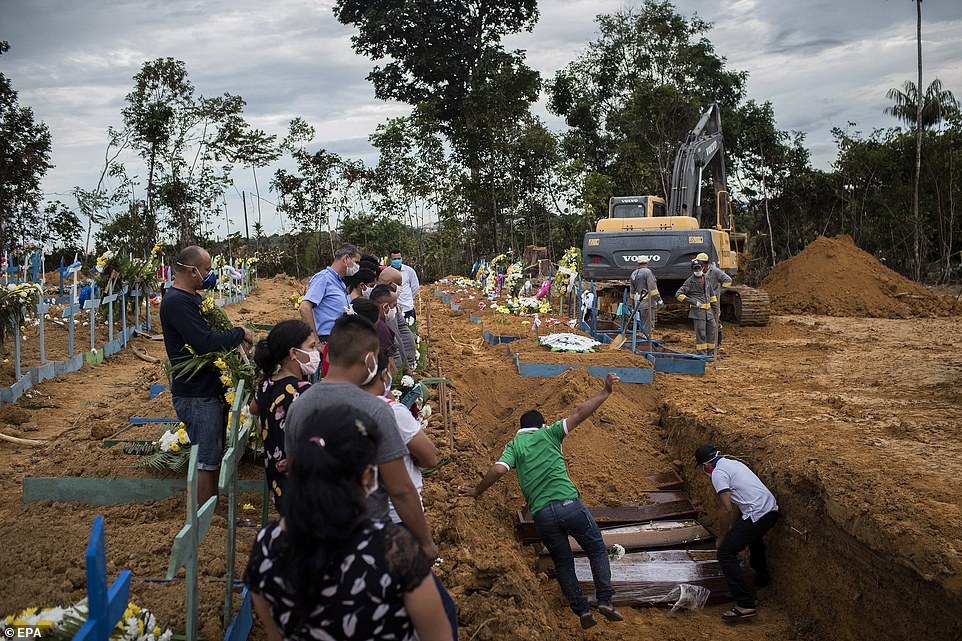 People attend a funeral at a mass grave at the Nossa Senhora Aparecida cemetery in Manaus, Brazil yesterday

Local authorities have built a field hospital and the federal government has summoned doctors from around the country to help out in Manaus.

But 90 per cent of the city’s intensive care beds are already occupied, when the epidemic is not expected to peak until May.

The city accounts for all of the intensive care units in Amazonas and 80 percent of its specialised doctors, said Bernardo Albuquerque, an infectious disease expert at Amazonas Federal University.

Personal protective equipment for health care workers is in short supply, as are medicine and equipment like X-ray machines and other kinds of scanners.

‘The system is truly centralized in the capital,’ Albuquerque told AFP. 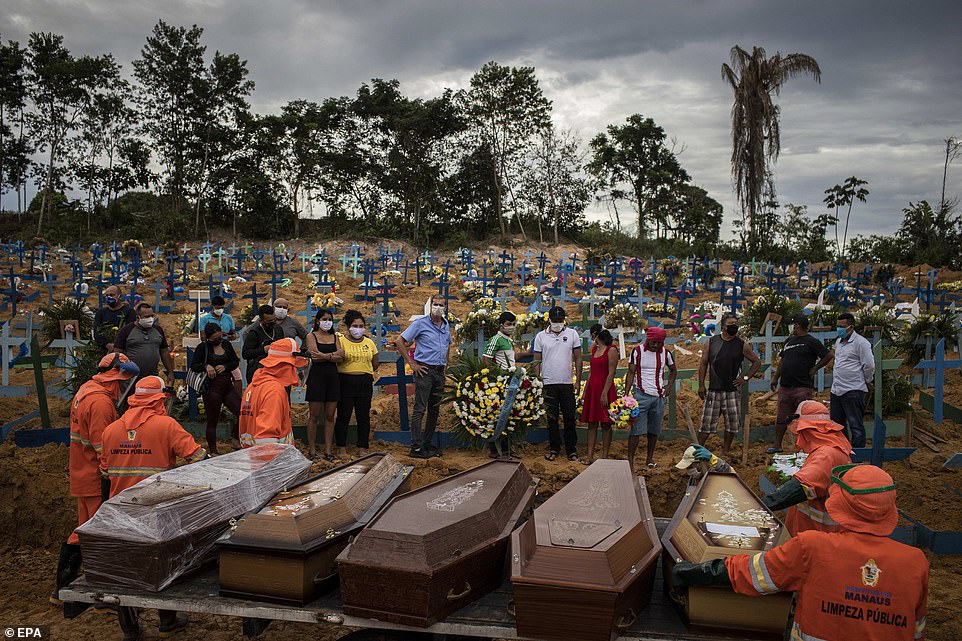 People attend a funeral at a mass grave at the Nossa Senhora Aparecida cemetery in Manaus, Brazil. The city has been the country’s worst hit area by the pandemic 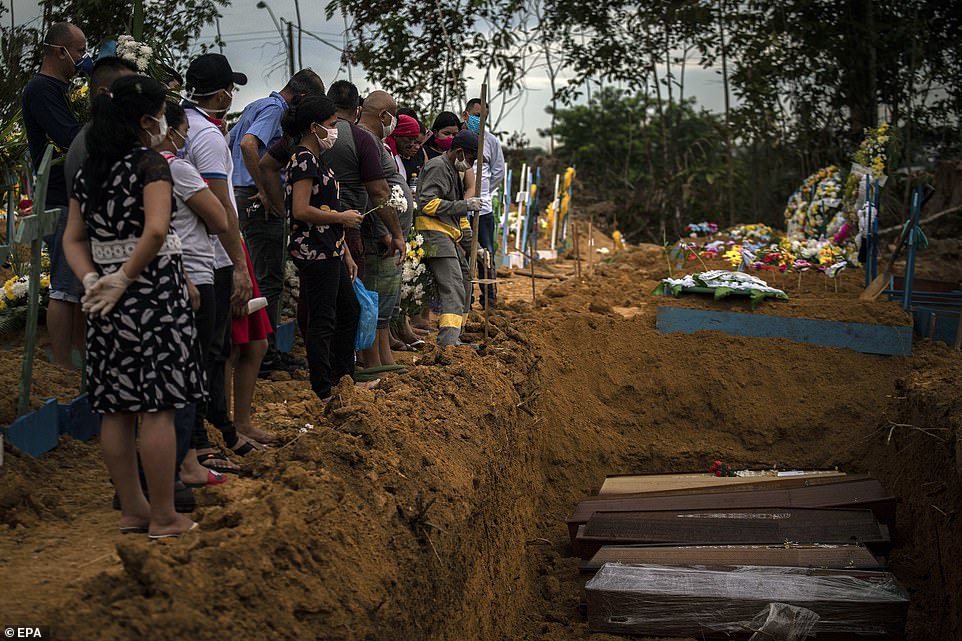 Many of the burials taking place are mass burials due to the high volume of people who are dying every day in the area. The burial pictured happened yesterday 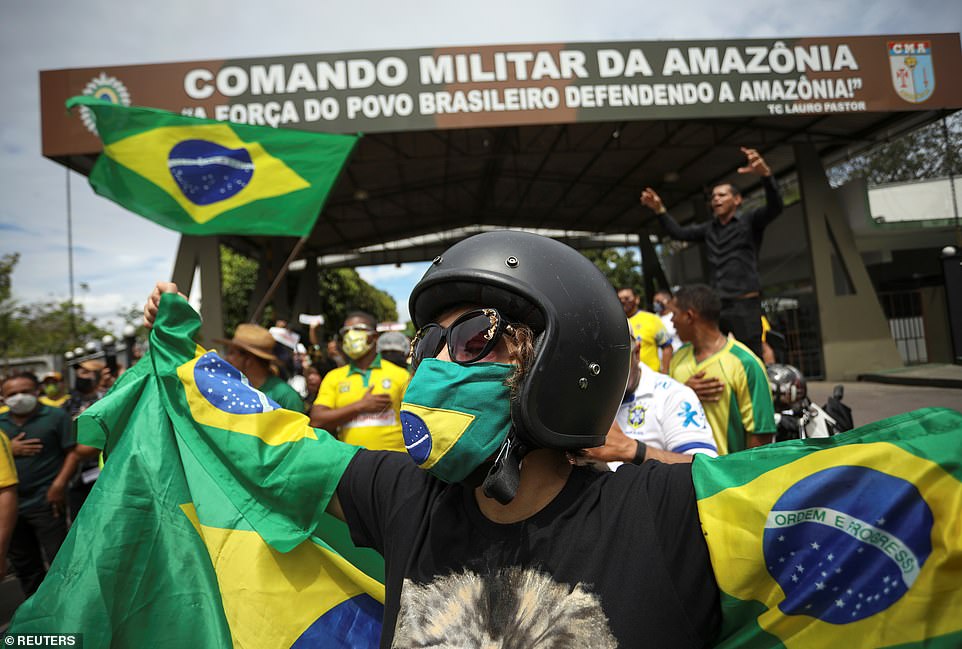 A supporter of far-right Brazilian President Jair Bolsonaro protests against the recommendations for social isolation from the Governor of Amazonas Wilson Miranda Lima, during the coronavirus disease (COVID-19) outbreak in Manaus 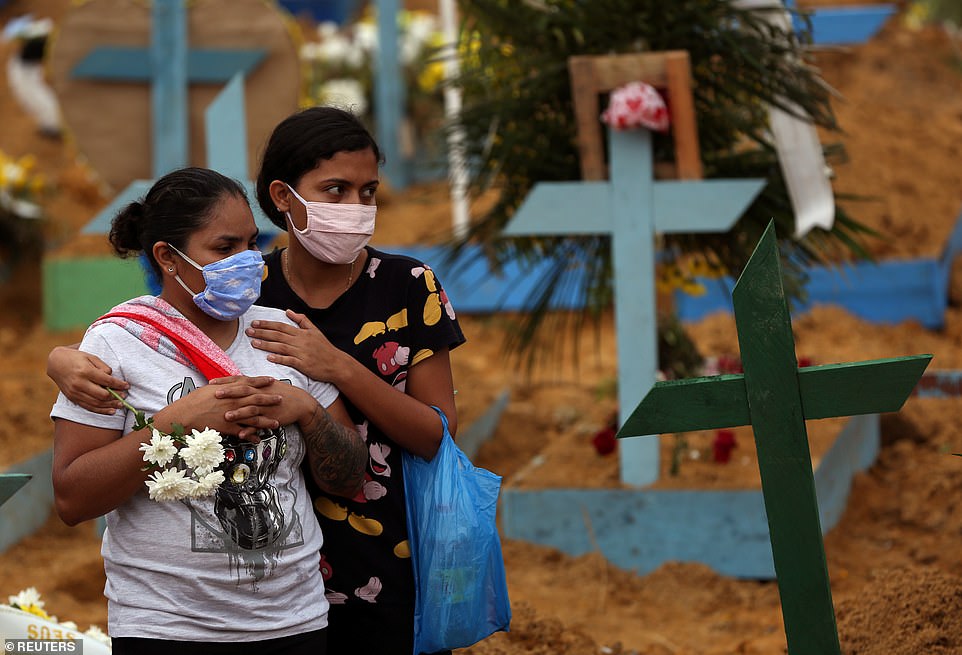 Women are seen during a collective burial of people that have passed away due to the coronavirus disease (COVID-19), at the Parque Taruma cemetery in Manaus, Brazil 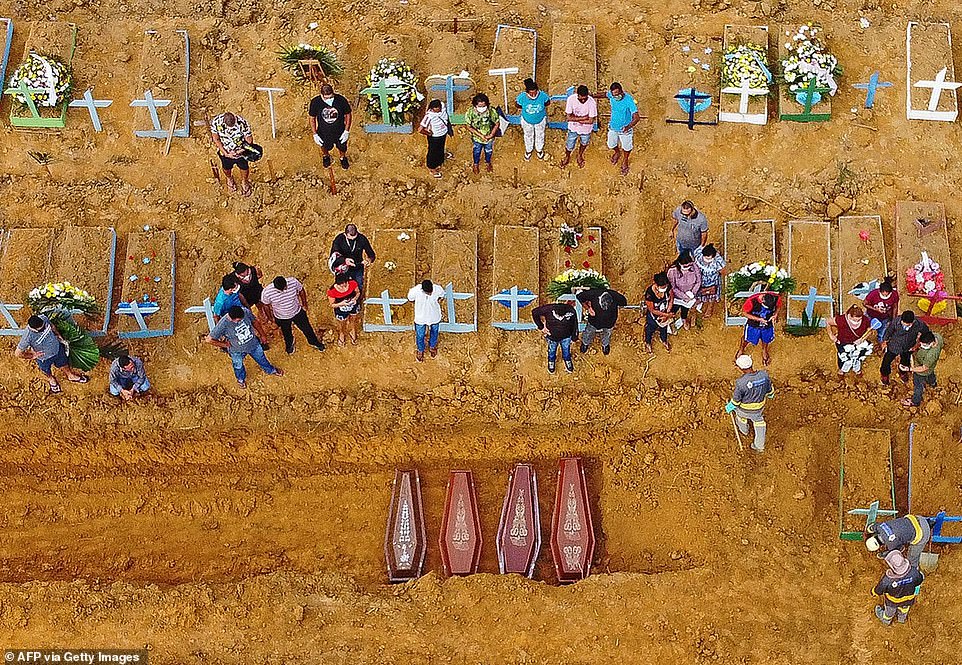 This aerial picture shows a burial taking place at an area where new graves have been dug up at the Nossa Senhora Aparecida cemetery in Manaus, in the Amazon forest in Brazil 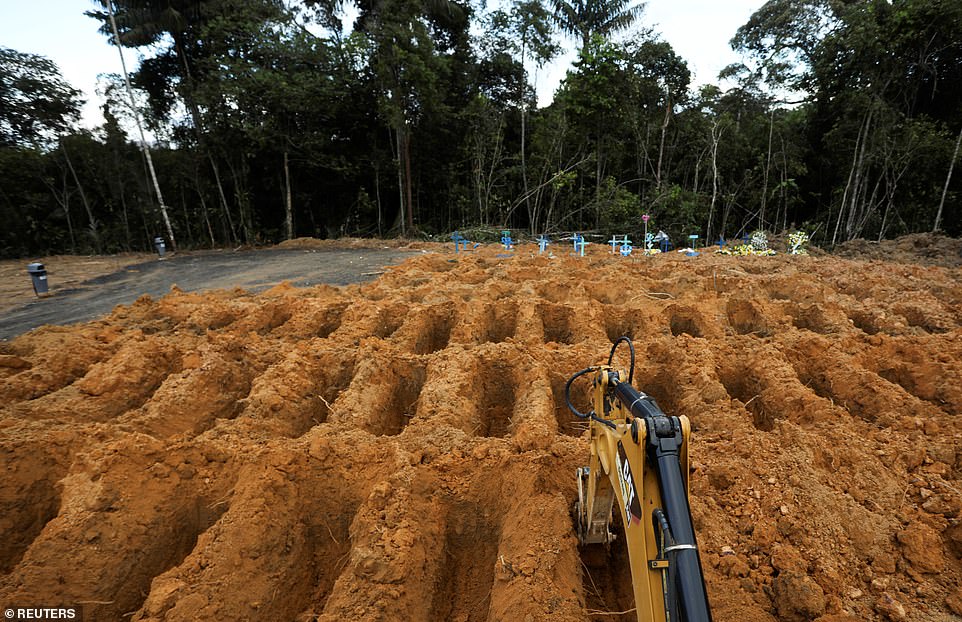 An excavator is seen at the Parque Taruma cemetery during the coronavirus disease (COVID-19) outbreak, in Manaus, Brazil 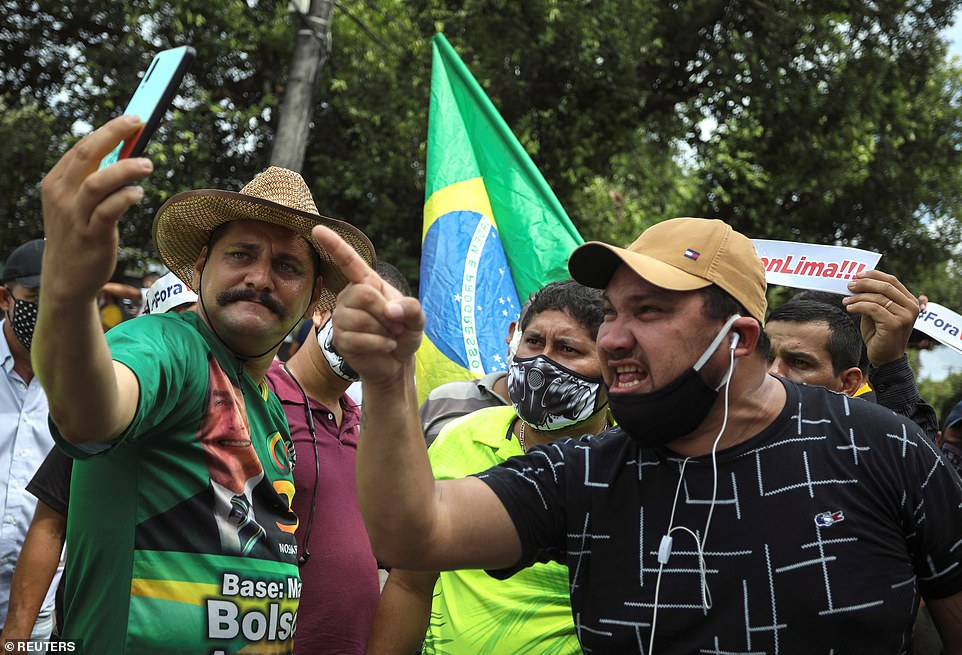 Amazonas is one of Brazil’s hardest-hit states, with 2,479 cases and 207 reported deaths as of Tuesday. However people were still protesting (pictured) against social distancing rules in Manaus on Sunday

So people in the rest of the state’s 61 municipalities, some of them days away by boat, have to come to Manaus for medical treatment.

Only 18 of them are connected to Manaus by roads. The rest only have access by river or plane, said Albuquerque.

And a patient arriving in Manaus from out of town confronts ‘a deplorable situation or has no guarantee of getting adequate medical are. It is a dramatic situation,’ said the mayor.

Amazonas has more indigenous people than any other state in Brazil, and they are vulnerable to diseases brought in from outside because their immune systems have not been exposed to them. Historically, they have been devastated by viruses they cannot cope with. 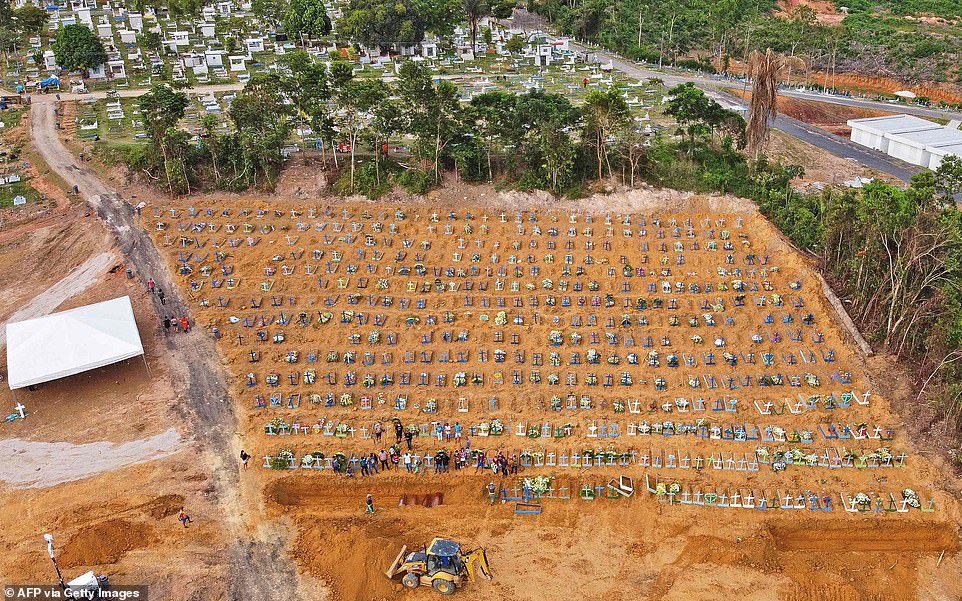 The city of Manaus has the highest death rate of any state capital in Brazil and the mayor fears there are more hidden deaths because people are dying at home without medical care. Pictured is the new burial site 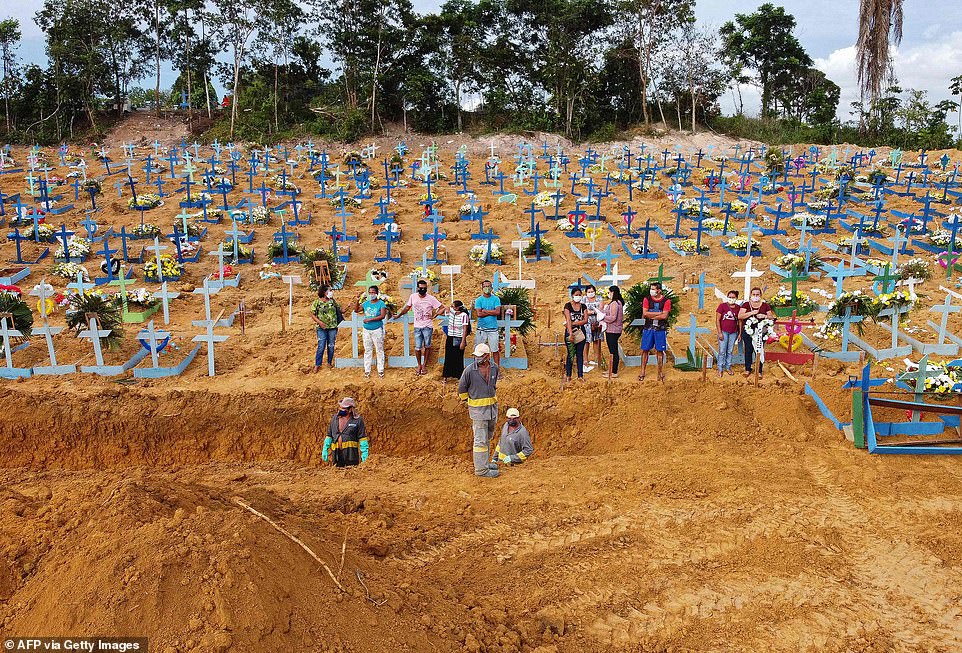 So far three indigenous people are known to have died of COVID-19 and 15 of 31 infected with the virus are being treated in Manaus.

The Bolsonaro government has offered to build a field hospital just for indigenous people but local authorities are still waiting for this project to get going.

The Health Ministry said earlier this month it feared a public health catastrophe in Amazonas.

‘If we could snap our fingers and say, ‘let’s have it all ready tomorrow,’ that would be the ideal timeframe,’ he said.