Kelly Rizzo is reaching out to Twitter CEO Elon Musk with a special request that her late husband Bob Saget be verified.

The 43-year-old TV host shared a public plea to the 51-year-old Tesla angel investor on Monday, which marked the one-year anniversary of the comedians untimely death at 65.

Rizzo tweeted that her late husband was no longer verified, and screenshots of his old tweets indicate that he was previously verified.

His account appears to have lost its verified status more recently, presumably after Musk-mandated changes to the verification system allowed users to pay $8 to $11 per month for the status and special features.

Request: Kelly Rizzo tweeted at Elon Musk on Monday — the one-year anniversary of her husband Bob Saget’s death — to request that his Twitter account be verified; pictured in 2018

Although Musk, who was formerly the world’s richest man, instituted the paid tier to raise revenue for the social media platform after he paid around $44 billion for it, several companies, media outlets and prominent figures have kept check marks indicating that they are reliable or notable accounts.

However, Saget’s posthumous account appears to have been stripped of his status in the chaos.

‘Hi @elonmusk -today on the 1 year anniversary of Bob’s (@bobsaget ) passing, I saw he’s no longer verified? My husband truly loved Twitter. Out of respect for his legacy, can something be done? Thank you kindly 🙏🏻 (friends, please help),’ Rizzo tweeted on Monday.

In a follow-up tweet, she added, ‘And the only reason I’m addressing this at all is because I know Bob would be very bummed about this. He’d say “hey, if someone goes to see my page and all the jokes I’ve tweeted over the years, how will they know it’s for sure me!?” 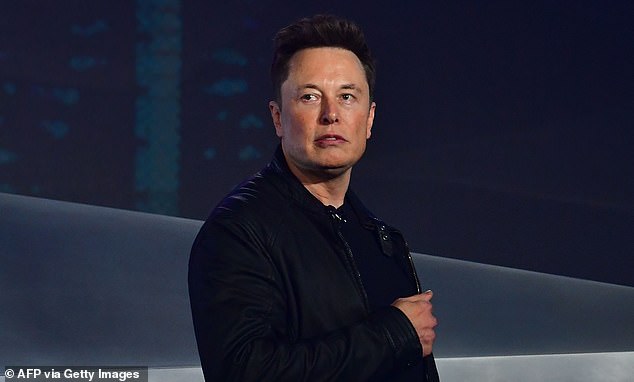 Removed: Saget’s account was previously verified and may have lost its status after Twitter owner and CEO Elon Musk changed the verification system in an attempt to get users to pay $8–11 per month to be verified; seen in 2019

Missing: Kelly said she had noticed Bob was no longer verified on the anniversary of his death, while screenshots confirm he was previously verified

ID purposes: She added that she wanted the verification to make it clear that the Full House star’s old jokes got proper credit

Saget was found dead in his hotel room at the Ritz-Carlton in Orlando, Florida, on January 9, 2022.

He had been in the midst of a stand-up comedy tour and had last performed at Ponte Vedra Beach in the state.

The cause of his death was not initially clear, but an autopsy report later revealed that the Full House star had died as a result of blunt force trauma from an apparent injury to the back of the head, which was believed to be the result of a fall.

Saget was also positive for Covid-19 at the time, though the autopsy determined that it was not related to his death.

The film and television star appeared to have gone to bed after suffering the wound and died in his sleep. 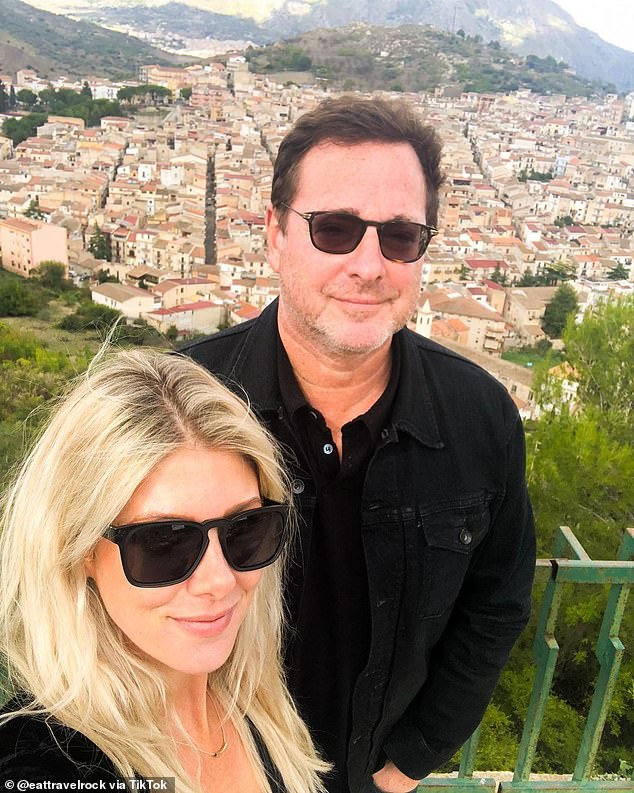 Tragedy: Saget was found dead in his hotel room at the Ritz-Carlton in Orlando, Florida, on January 9, 2022

Emergency personnel were called to his hotel room after he overstayed past his checkout time, while calls to his phone went unanswered.

Rizzo also used Monday as an opportunity to her late husband’s life.

A video shared to her Instagram account included a short slideshow of photos and videos from their marriage, soundtracked to Ben Folds’ song The Luckiest.

‘One Year. Our hearts are so heavy. How could I not have talked to or seen my loving husband in a whole year?’ she wrote in her caption.

‘The surreal-ness never subsides. I’ve accepted the reality long ago but it still seems unreal when I see photos or videos of him so full of life. But there is one thing I carry with me every single day that makes this survivable. I AM THE LUCKIEST,’ she continued. 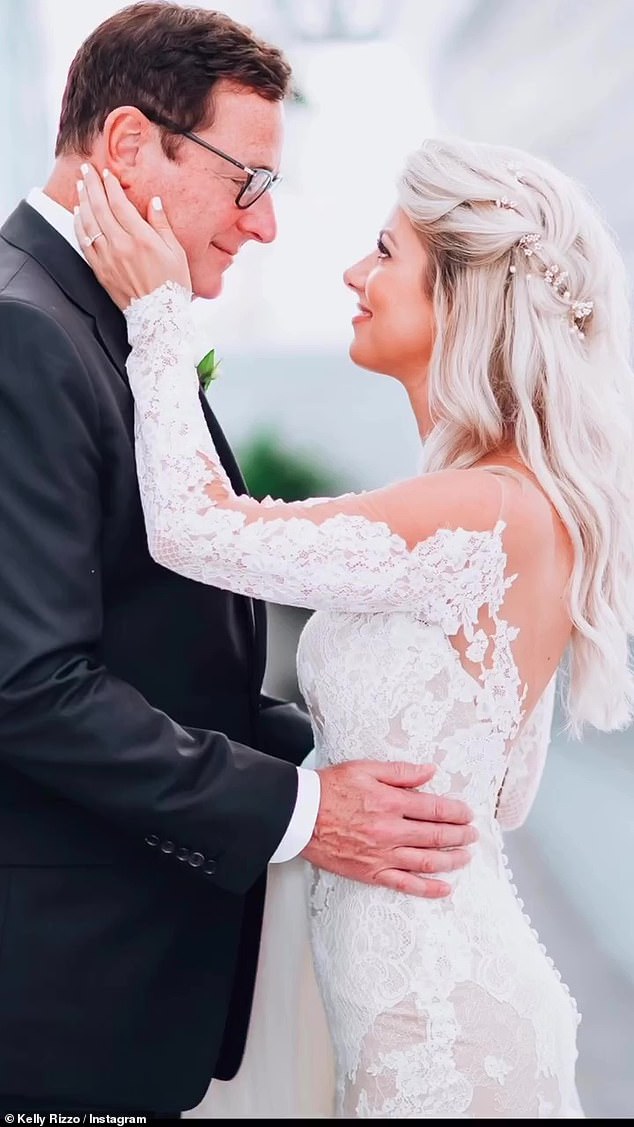 All alone: The comedian was revealed to have died from blunt force trauma, which was theorized to be from a fall. He apparently went to bed after suffering the injury and died in his sleep 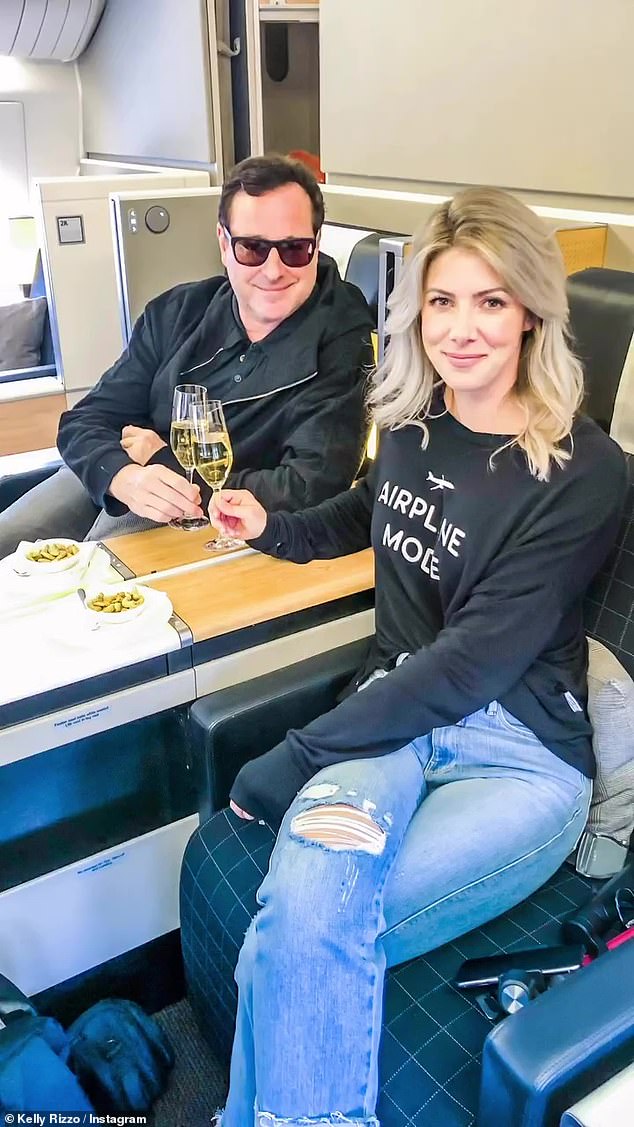 Sweet: A video shared to Rizzo’s Instagram included a short slideshow of photos and videos from her marriage, soundtracked to Ben Folds’ song The Luckiest 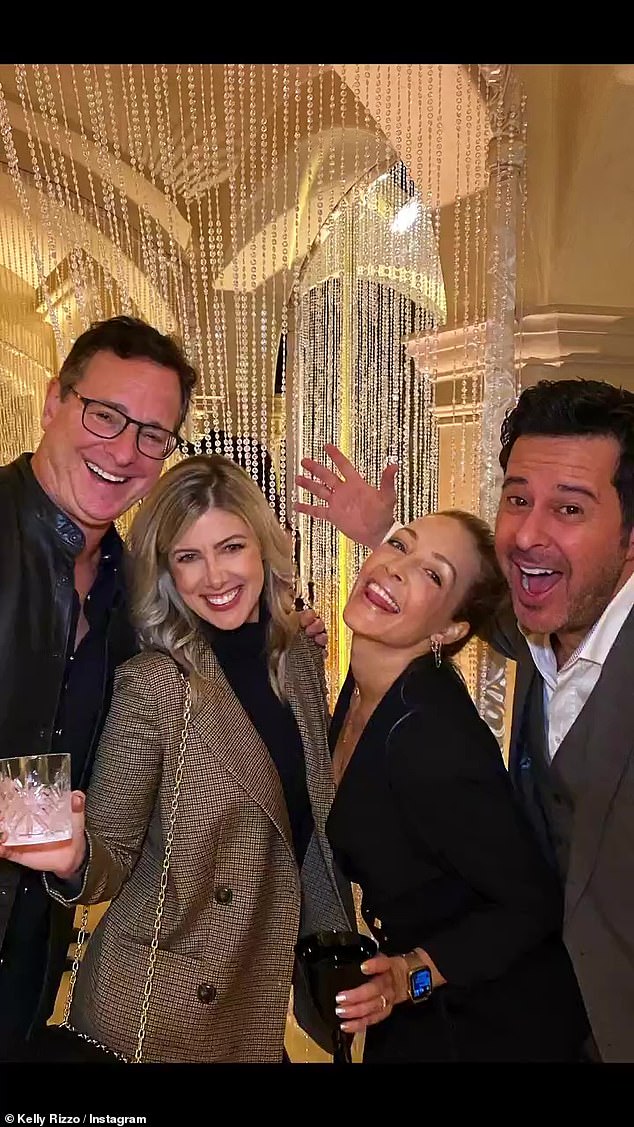 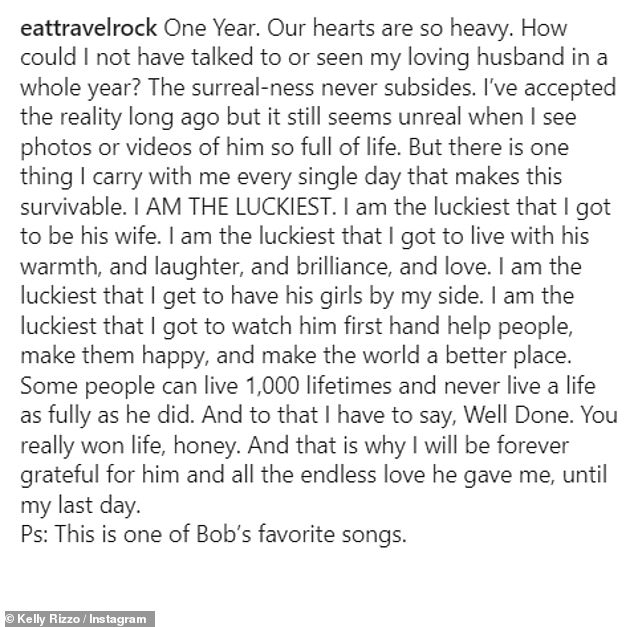 Missing him: ‘How could I not have talked to or seen my loving husband in a whole year?’ she wrote, before writing how she was grateful that he led such a full life

‘Some people can live 1,000 lifetimes and never live a life as fully as he did. And to that I have to say, Well Done. You really won life, honey. And that is why I will be forever grateful for him and all the endless love he gave me, until my last day,’ she wrote, adding that the Ben Folds song was one of his favorites.

In an essay for People Kelly wrote, ‘Complicated, brilliant, compassionate, hilarious, neurotic, opinionated, loving, adorable, complex, determined, loyal and sweet. He taught me so much about how to be a better person, how to love ourselves and others more completely.’

She also wrote of the support she had from Bob’s daughters, Aubrey, 36, Lara, 33 and Jennifer, 30, in dealing with the pain of his loss, telling People they were ‘true miracles and angels and the gratitude I have that we have each other is immeasurable.’