Scientists have demonstrated tiny boats that float upside down underneath a levitating layer of liquid in an amazing quirk of physics.

Researchers in Paris were investigating the effect of vertical shaking, which can be used to suspend a layer of liquid in mid-air.

Not only was the layer of liquid able to float on a suspended cushion of air, but small model boats floated on the bottom surface, thanks to intense air pressure.

This counter-intuitive behaviour is a result of the constant vibrations, which change the forces acting on the floating object.

This case of ‘reverse-buoyancy’ might have a practical uses in transporting materials through fluids and separating pollutants from water.

Footage shows the gravity-defying physics experiment, which was inspired by weird surrealist Japanese art sci-fi films and Pirates of the Caribbean.

In particular, study author Emmanuel Fort at ESPCI Paris said the research took its cue from a scene in the 2007 film Pirates of the Caribbean: At World’s End, when Captain Jack Sparrow’s Black Pearl ship is tipped upside down.

‘We were playing around –  we had no idea it would work,’ Fort told the Guardian.

‘The fun thing is that it triggers reactions from people who aren’t scientific.

‘It’s counterintuitive. It gets people talking about science fiction and fantasy and that is very nice.’ 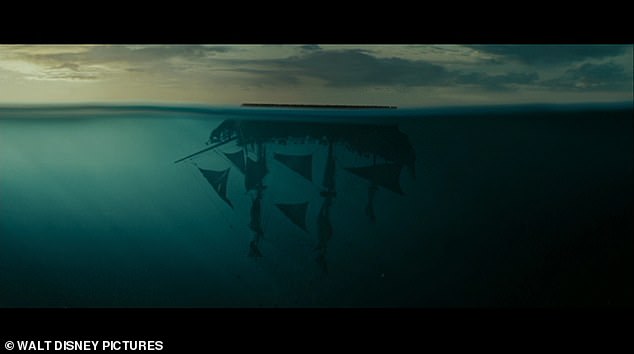 A scene from Pirates of the Caribbean: At World’s End, when Captain Jack Sparrow’s Black Pearl ship is tipped upside down

Under the action of gravity, viscous liquids in a container, such as a laboratory flask, will typically fall to the bottom of the vessel.

Flipping the container upside down will make the liquid slowly fall to the bottom in thick drops, like paint falling down a wall.

But keeping the liquid in the air can be achieved by ‘vigorous vertical shaking’ of the container.

Scientists already knew that vibrating liquid vertically at certain frequencies and in a closed container can make it levitate above a less dense layer, such as a cushion of air.

Thanks to the vibrations, air bubbles in the lower half sink rather than rise.

In their experiments, the team filled a container with a viscous liquid of either glycerol and silicon oil, and used shaking devices to vibrate the liquid vertically at high frequency. 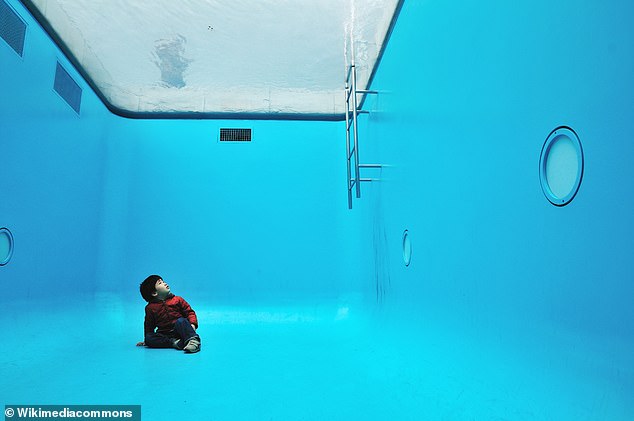 Swimming Pool by Leandro Erlichat, another mind-bending inspiration for the research project

They injected air into the base of the system until the liquid started to levitate while being vibrated.

The air bubbles added to the liquid sank to the bottom of the container, as expected.

But small objects, up to 7 grams in mass and 0.9 inches (2.5cm) in length or diameter, floated upside-down on the underside of where the air and liquid met, they found.

This is because the layer of air underneath the upside down boat and floating liquid layer has very high pressure, as it’s being compressed by the weight of the liquid.

This results in the boat being pushed up by the pressure underneath. 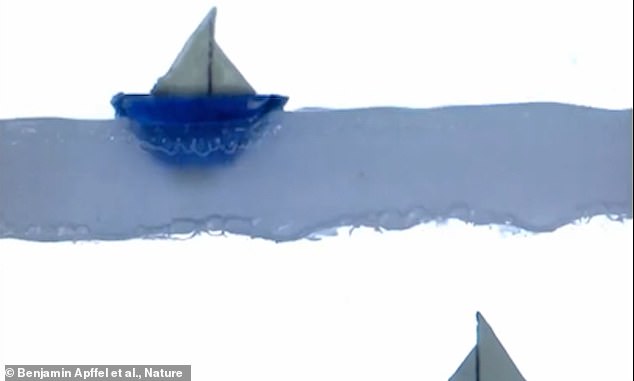 When that pressure meets an equilibrium with the downward force of gravity, the boat floats.

All the while, the boat has its own buoyant force that keeps it suspended.

Vertical shaking causes buoyancy to flip at the lower surface of the levitated liquid, as if the gravity there has been inverted.

Buoyancy is the force exerted by a fluid that opposes the weight of an object immersed in the fluid.

‘The extraordinary behaviours of vibrating fluids are just a small fraction of the surprising phenomena that arise as a result of high frequency vibrations more generally,’ Vladislav Sorokin at the University of Auckland and Iliya Blekhman at the Russian Academy of Science, who weren’t involved with the study, write in an accompanying piece in Nature.

‘[The research] suggests that many remarkable phenomena arising in vibrating mechanical systems are yet to be revealed and explained, particularly at interfaces between gases and fluids.’

The observations made by Fort and colleagues defy Archimedes’ principle, in which an upward buoyant force, equal to the weight of displaced fluid, is exerted on an immersed body.

The study has been published in Nature.

WHAT IS THE ARCHIMEDES’ PRINCIPLE?

Archimedes’ principle, the physical law of buoyancy, was discovered by the ancient Greek mathematician and inventor Archimedes.

It states that any body completely or partially submerged in a fluid (gas or liquid) at rest is acted upon by an upward, or buoyant, force, the magnitude of which is equal to the weight of the fluid displaced by the body.

The volume of displaced fluid is equivalent to the volume of an object fully immersed in a fluid or to that fraction of the volume below the surface for an object partially submerged in a liquid.

The weight of the displaced portion of the fluid is equivalent to the magnitude of the buoyant force.

The buoyant force on a body floating in a liquid or gas is also equivalent in magnitude to the weight of the floating object and is opposite in direction – the object neither rises nor sinks.

For example, a ship that is launched sinks into the ocean until the weight of the water it displaces is just equal to its own weight.

As the ship is loaded, it sinks deeper, displacing more water, and so the magnitude of the buoyant force continuously matches the weight of the ship and its cargo.