You can pay for most things on a subscription nowadays, from music and movie streaming to food recipe boxes and beer deliveries.

And now drivers are able to tap into pay-monthly packages for specific features in BMW cars, such as heated front seats for £15.

It is part of the German brand’s connected drive package, which from this week has added a host of new features, including monthly subscriptions to have a heated steering wheel and a headlight system that prevents the user from dazzling oncoming traffic.

The controversial move means drivers pay annual or monthly fees for the automaker to temporarily delete software that blocks them from using features already installed in the vehicle that sit behind a paywall.

BMW’s latest cars have features you might not know about: The German brand is producing models with a host of technology in the background – and you have to pay a one-off fee or monthly subscription to unlock them 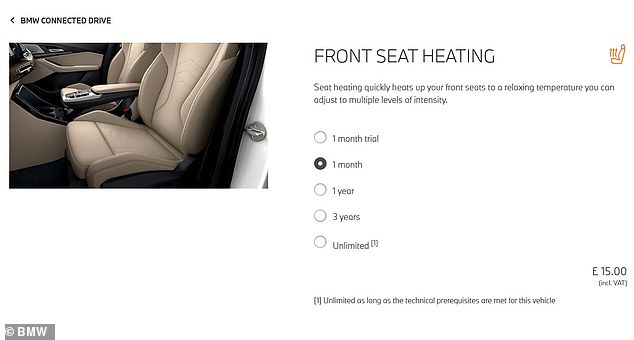 BMW first launched the service in 2020, which offers over-the-air software upgrades to activate new – or turned off – features in its latest models.

Only its cars running Operating System 7 are compatible with the updates system, which will allow customers to subscribe to specific features that are already built into their cars but are not activated.

The car firm gains access to the car’s software via the built in wi-fi and deletes a line of code in the computer system that had been blocking the feature from being accessed.

It means drivers can upgrade their existing cars without having to step foot in a BMW dealership.

Most of the features are those that might not have been available with specific trim level when the car purchased by the original owner, or are optional extras that were not selected during the order process.

Until recently, it has mostly offered permanent upgrades.

This includes adaptive cruise control for a one-off fee of £750, adaptive suspension for £399, Apple CarPlay for £265 and something called ‘IconicSound Sport’, which is an artificial louder engine note that’s played through the interior speakers, for £99.

However, customers from this week have been offered a range of other features on a non-permanent basis – either over a course of years, one year and even monthly subscriptions.

This is similar to microtransactions available in computer games that allows players to access new features and updates.

It means BMW drivers can now have heated front seats to order, which is available permanently for £350, for three years for £250, an annual subscription of £150 or monthly for £15. 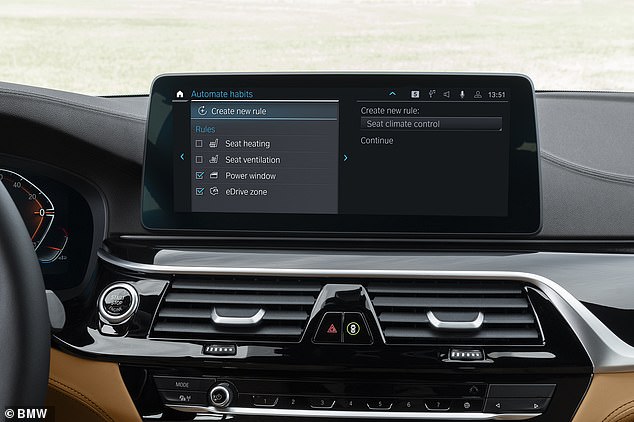 Only its cars running Operating System 7 are compatible with the updates system. It adds the feature via wi-fi by deleting lines of code in the computer system that blocks features already installed in the vehicle from being accessed 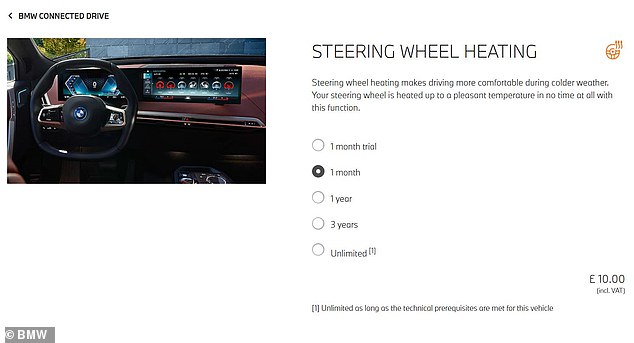 Want a heated steering wheel in your BMW for the winter only? You can get it for £10 a month

It’s the same pricing structure for BMW’s ‘high beam assistant’, which is a system that automatically dips full beam headlights when there’s another road user up ahead.

Owners can also add the ‘driving assistance plus’ package, which is a version of adaptive cruise control that automatically maintains a pre-set speed, keeps a certain distance from the vehicle ahead and can steer the car in its lane. 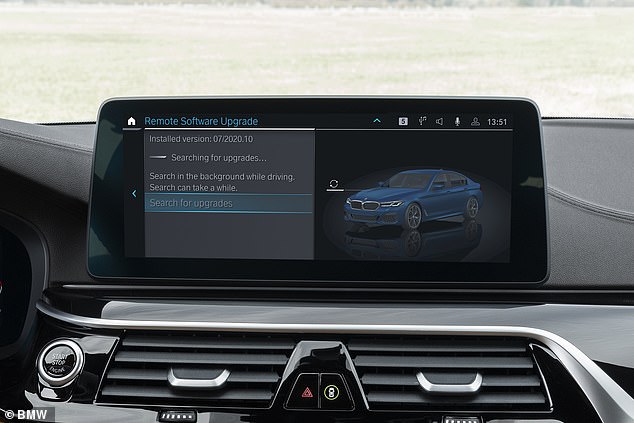 Drivers of the latest BMW cars now have heated front seats on a 3 year subscription for £250, an annual payment of £150 or monthly for £15. They can also pay £350 to have it permanently available

Car features behind a paywall: Smart of just greedy?

Launching the updates system in 2020, Oliver Zipse, chairman at BMW, said: ‘Digital technologies belong to the core of BMW – because hardware and software are of equal importance for premium cars.

‘Our mission is to integrate advanced digital technologies with highest product excellence to enhance our customers’ experience and driving pleasure even more.’

While in some instances a monthly subscription might make sense for seasonal features, such as only needing heated front seats in the winter months rather than during the current heatwave, it does raise questions about why a driver might want others on a non-permanent basis.

This is especially the case with high-beam assist, which is ultimately a system that improves road safety by not dazzling other motorists.

It also means that BMW has to install all the hardware to power these functions, even if the first owner doesn’t want them activated.

For instance, it will need to assemble heat pads in the front seats of all models and always fit steering wheels with heat elements in them rather than a standard plastic rim – then install software that blocks its use if the buyer is unwilling to pay for it. 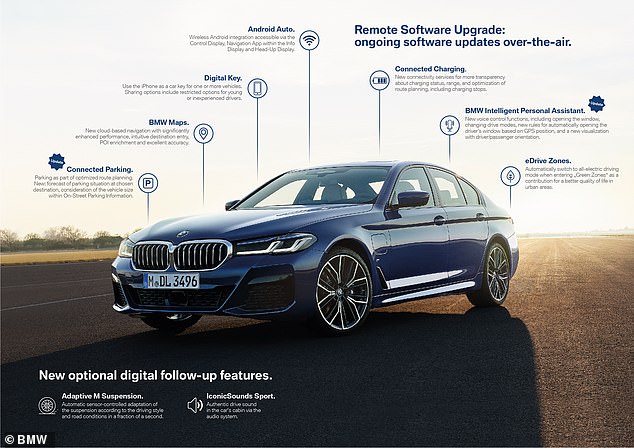 BMW first unveiled its plans to offer a subscription service for features in 2020, though it has only offered monthly fees for heated seats and a heated steering wheel from this week

While this means the automaker will need to fully-load all its new cars, it will likely reduce production time as the vehicles are no longer being built to customer order with specific features.

When we asked a BMW spokesperson why drivers might want to use a monthly subscription, This is Money was told: ‘The connected drive store offers customers the opportunity to add selected features, which they did not order when the vehicle was built, at a later date.

‘This can be helpful for new customers should their circumstances change after their purchase.

‘For secondary owners, this functionality is particularly useful, as they now have the opportunity to add features the original owner did not choose.

‘Customers can enable all hardware features for a one-time payment or if preferable, choose an annual or monthly subscription, depending on the feature.

‘This enables drivers to experiment with a feature by purchasing a short-term trial before committing to a purchase.’

The system also allows BMW customers to trail the features for one month free of charge before committing to having it updated on a permanent basis in their car at a cost.

This also includes ‘BMW safety camera information’, which notifies the driver when they are approaching a fixed speed camera. This can be trailled for free for one month before being purchased only on an annual subscription of £25.

The drive assistance plus feature is available for free on a three-month trial.

The car maker has come under heavy scrutiny since the heated seat subscription package was first spotted on the South Korean BMW site earlier this week, with drivers branding the move as ‘greedy’.

Responding to the news on Twitter, once user said: ‘BMW are seriously asking for monthly subscriptions for heated seats, heated steering wheels.

‘What next? “We are sorry but your car not be driven on Sundays.”‘

Another Twitter user added: ‘Though I have no need for heated seats, I would consider looking at other brands.

‘If a company is so greedy to charge for something like that it makes me wonder about the overall quality of their vehicles.’

However, not everyone is completely against the concept of paying for features on demand during specific months.

One user tweeted: ‘Sounds mad but on thinking about it it could make sense.

‘If there is no extra initial cost to spec heated seats in the car then only paying for the winter months could make more sense.

‘You’d need to see the maths!’ 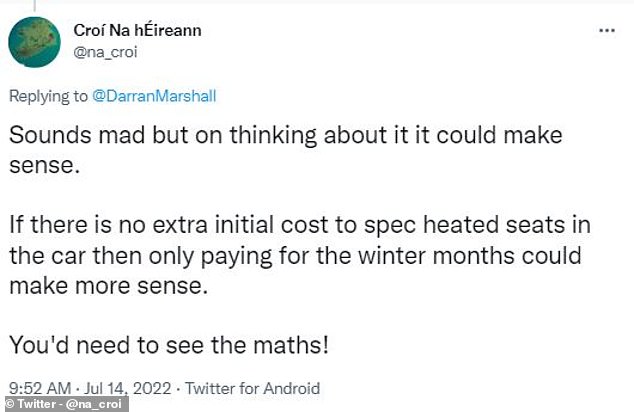