On the verge of evening their wildcard series with the Mariners on Saturday in Toronto, the Blue Jays instead suffered a devastating season-ending defeat after center fielder George Springer collided with shortstop Bo Bichette in the eighth inning, allowing Seattle to tie the game.

Seattle would go on to win Game 2, 10-9, after an Adam Frazier double in the ninth scored catcher Cal Raleigh. The Mariners had trailed by seven runs earlier in the game.

With two out and the bases loaded in the eighth, Mariners star J.P. Crawford hit a blooper into shallow center field. Springer and Bichette went hard after the ball, but it landed as the two collided. All three runners scored on the double, tying it 9.

It looked as if Bichette’s right arm whacked Springer across the forehead. Bichette got up pretty quickly and stayed in the game after he was checked on by a trainer. A woozy Springer was helped to his feet as the cart was driven onto the field.

The 33-year-old Springer, a four-time All-Star, encouraged the cheering crowd as the cart left the field.

It was the biggest road comeback win in playoff history and baseball’s largest comeback victory to clinch a postseason series. Next up for resilient Seattle is Houston in the AL Division Series.

Making the franchise’s first playoff appearance since 2001, Seattle trailed 8-1 through five innings, but it tied it at 9 with four runs in the eighth.

Tie game, Mariners come all the way back from being down 8-1, but George Springer is not okay. Scary moment. It’s dead silence in Toronto. pic.twitter.com/uAoewi4Cn3 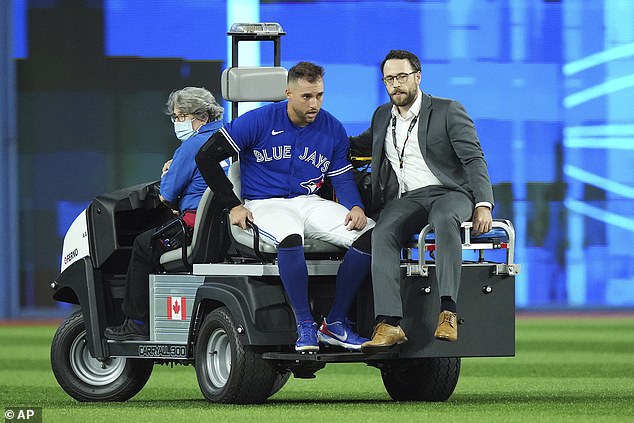 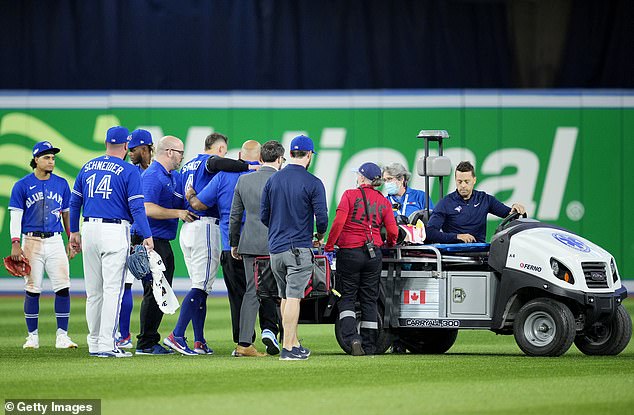 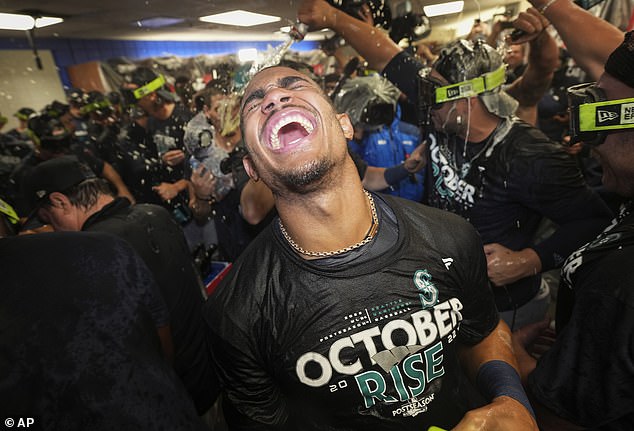 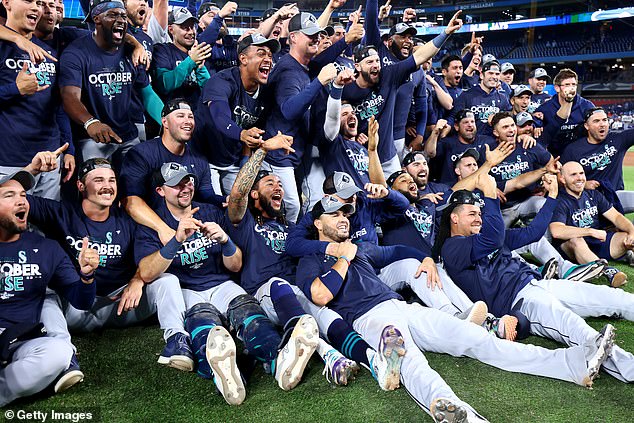 Bichette walked, stole second and advanced to third on a grounder in the eighth, but Andrés Muñoz retired Alejandro Kirk to end the threat.

George Kirby, Seattle’s eighth pitcher of the game, handled the ninth for his first career save. Matt Chapman walked with one out, but Danny Jansen struck out and Raimel Tapia lined out to end the game.

The Mariners then poured out of their dugout and celebrated behind the mound. They also beat Toronto 4-0 in Game 1 of the best-of-three series on Friday.

Toronto got off to a fast start in Game 2. Teoscar Hernández hit a two-run homer in the second and a solo drive in the fourth against Robbie Ray, who won the AL Cy Young Award while pitching for the Blue Jays last year.

Hernández joined teammate Danny Jansen and former Toronto slugger José Bautista as the only Blue Jays players with multihomer games in the postseason. 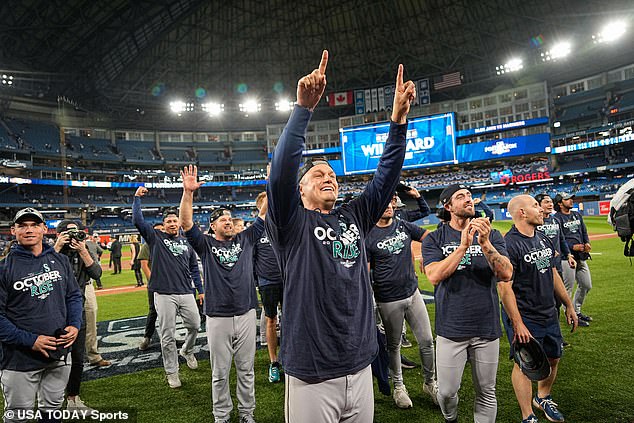 Jansen made it 9-5 with an RBI single off Penn Murfee in the seventh, but Toronto’s bullpen couldn’t close it out. Anthony Bass gave up hits to all three batters he faced in the eighth, including Raleigh’s RBI single, forcing interim Blue Jays manager John Schneider to call on Romano for a six-out save.

Romano gave up a single to Frazier and struck out Santana and Dylan Moore, but Crawford tied it with a first-pitch double.

Ray, who signed a $115 million, five-year contract with Seattle in November, allowed four runs and six hits in three-plus innings.

Blue Jays right-hander Kevin Gausman was charged with four runs and five hits over 5 2/3 innings in his second career postseason start. Gausman struck out seven and walked one.

Toronto’s Whit Merrfield stayed in to run the bases after being hit on the side of his batting helmet by an 88 mph slider from Diego Castillo on his first pitch after entering in the fifth. Tapia replaced Merrifield in left field in the sixth. 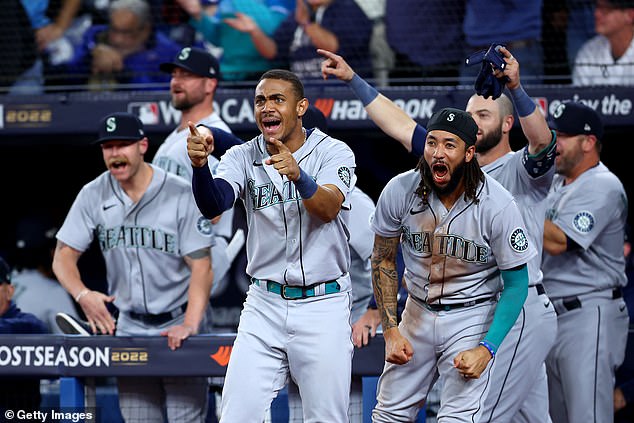 Julio Rodriguez #44 and J.P. Crawford #3 of the Seattle Mariners celebrate Adam Frazier #26 RBI double to take the lead against the Toronto Blue Jays

Justin Verlander will start Game 1 of the American League Division Series for the Astros on Tuesday.

It was a forgone conclusion the AL Cy Young Award frontrunner will start that game, and manager Dusty Baker made it official Saturday.

The worked out at Minute Maid Park as they wait to play the winner of the wild-card series between Toronto and Seattle.

He said they hadn’t yet set their rotation past their opener because the opponent had not been determined at the time.

‘We know it, but we don’t want to solidify it until we know,’ Baker said. ‘It could change depending on who we play.’

The two-time Cy Young Award winner’s ERA also was the lowest of his career, besting his 2.40 ERA in 2011, when he won his first Cy Young and was also voted AL MVP while with Detroit. 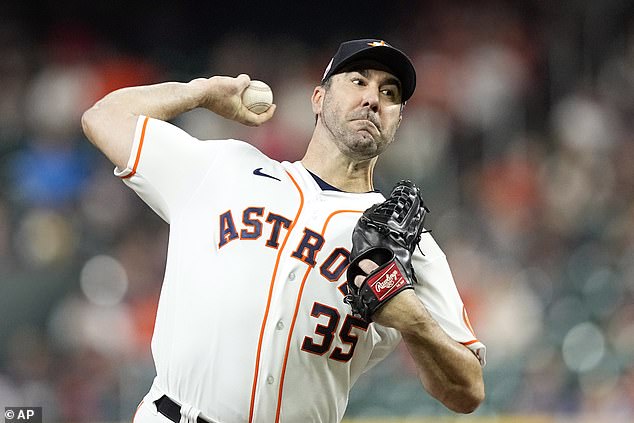