London’s status as Europe’s largest stock market has been snatched by Paris, as a raft of takeovers and political uncertainty weigh on the UK.

The market value of companies with a primary listing in London is now $2.821 trillion, or £2.405 trillion.

But France, in comparison, has edged above its rival with the value of its own listed companies climbing to $2.823 trillion or £2.406 trillion.

Vive la France: Paris is now Europe’s biggest stock market with the value of its own listed companies climbing to $2.823 trillion or £2.406 trillion

Six years ago, British-listed companies were worth £1.3 trillion more than their French counterparts, according to data from Bloomberg.

The damage has been caused by takeovers of UK-listed companies which were snapped up by overseas predators during Covid, as buyers took advantage of the turmoil, removing billions of pounds from the stock market.

The value of UK-listed companies has shrunk as companies have been taken off the stock market.

Earlier this year, asset manager Schroders warned a third of the major companies on the UK stock market a decade ago had disappeared, with more than half going to overseas buyers.

A Schroders spokesman said: ‘Too few companies have sought to join the UK stock market, to replace the ones departing. These takeovers may be cutting off potential future corporate success stories at the knees.’

More recently, London’s stock market has been weighed down by concerns over the economy, as red-hot inflation has pushed down growth and caused the cost of borrowing to jump.

While political uncertainty following Kwasi Kwarteng’s short tenure as chancellor, during which he announced unfunded tax cuts that have now been mostly overturned, also left its mark on investors.

Gerard Lyons, chief economist at wealth manager Netwealth and a former economic adviser to Boris Johnson during his time as Mayor of London, said the troubling data underlined the need for reforms to boost the UK’s competitiveness. 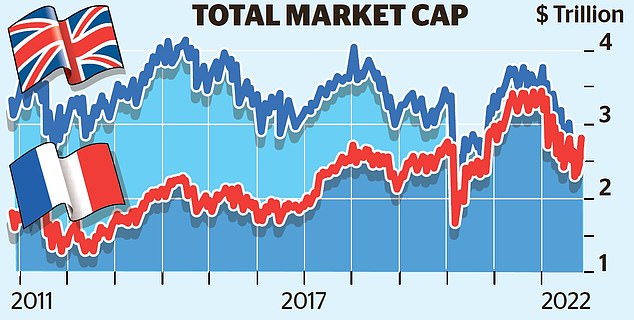 Referencing former European Commissioner for Financial Stability Lord Hill’s proposals to shake up the UK’s listing regime, and efforts by Mark Austin, corporate partner at law firm Freshfields and author of the Government’s Secondary Capital Raising Review, to make it easier for listed companies to raise cash, he added: ‘The data adds to the sense of urgency to take action on the lack of competitiveness in parts of London’s financial industry.’ 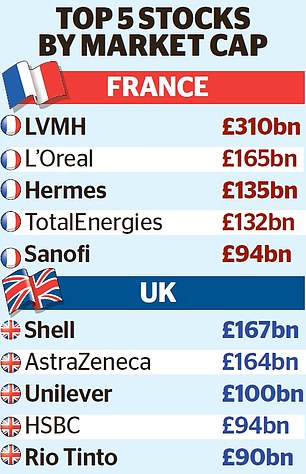 Some critics blamed the UK’s weakness relative to France on Brexit.

But others said this argument was too simplistic pointing out that some of the biggest losses of value in the UK compared to France occurred during the pandemic,

Julian Jessop, an independent economist and fellow of think tank the Institute of Economic Affairs, said: ‘UK equities have underperformed their peers in the rest of Europe for many years.

‘Nonetheless, it would be wrong to blame Brexit given that there are many other factors that influence stock market capitalisation.’

Alluding to Chancellor Jeremy Hunt’s Autumn Statement later this week, which is expected to unveil a series of tax hikes, he said: ‘Unfortunately the UK is about to head in the opposite direction.’

Britain has also been weighed down by its currency, which has slipped 12.7 per cent against the dollar this year. 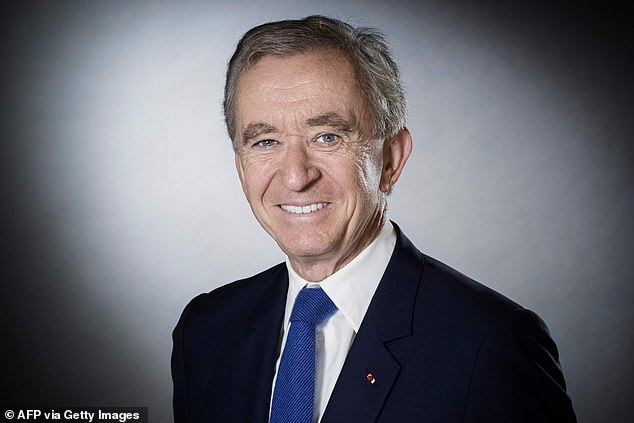 The euro has fallen by a more moderate 8.5 per cent. And France’s largest listed companies are all luxury goods businesses – Louis Vuitton owner LVMH (led by Bernard Arnault), Lancome parent L’Oreal, and Hermes.

These firms have been performing well recently, on hopes that sales will hold up as the cost of living crunch has a minimal effect on wealthier shoppers and could even surge as lockdown measures lift in China.

Britain’s biggest companies, however, are AstraZeneca, Shell and Unilever. Respectively they have been battling fierce international competition, worries about windfall taxes, and shrinking profit margins due to inflation.