A blood test may detect people at risk of developing type 2 diabetes two decades for the condition strikes, a study suggests.

Swedish scientists found people with high levels of a protein called follistatin were twice as likely to develop the ‘silent killer’, compared to volunteers at the other end of the scale.

The findings could allow for the condition to be spotted earlier, slashing the risk of subsequent complications, such as heart disease and strokes.

Obesity is the main trigger, so maintaining a healthy weight, eating a balanced diet and exercising can cut the risk of developing the condition. 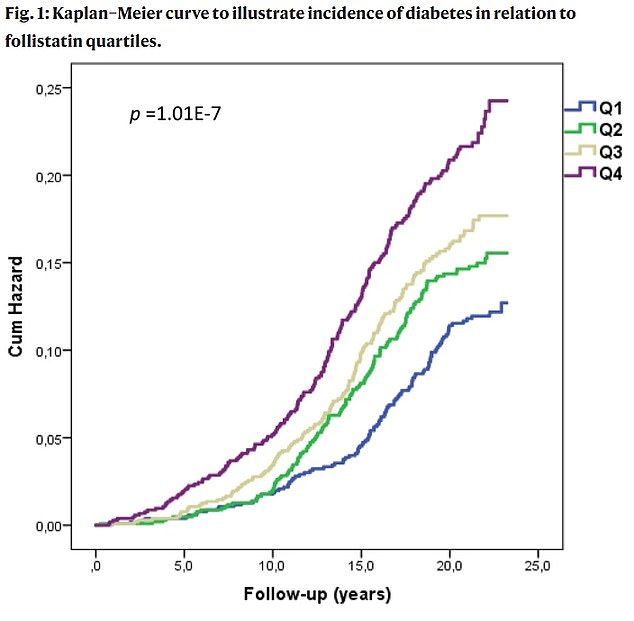 The graph shows the proportion of people who developed diabetes in relation to their follistatin levels. Those with the highest levels (purple line) were twice as likely to develop diabetes compared to those who had the lowest levels (blue line)

What is type 2 diabetes?

Type 2 diabetes is a common condition that causes the level of sugar (glucose) in the blood to become too high.

It can cause symptoms like excessive thirst, needing to pee a lot and tiredness. It can also increase your risk of getting serious problems with your eyes, heart and nerves.

It’s a lifelong condition that can affect your everyday life. You may need to change your diet, take medicines and have regular check-ups.

It’s caused by problems with a chemical in the body (hormone) called insulin. It’s often linked to being overweight or inactive, or having a family history of type 2 diabetes.

Diabetes is currently diagnosed after it develops though a blood or urine test, which detects high blood sugar levels.

Some 577 people (13.8 per cent) went on to suffer from type 2 diabetes, according to the results published in Nature Communications.

Those who developed the condition had higher levels of plasma follistatin in their blood at the start of the study, compared to those who did not.

Follistatin helps regulate the metabolism but it also encourages body fat to break down and accumulate in the liver, which can lead to type 2 diabetes and fatty liver disease.

Participants with slightly elevated follistatin were 28 per cent more likely to develop the condition.

Those who had higher follistatin levels were 47 per cent more likely to have type 2 diabetes in the following years.

And those with the highest levels were twice as likely to develop the illness.

‘It also brings us one step closer to the understanding of the mechanisms behind the disease.’

Dr Marinis, also CEO of biotech startup Lundoch Diagnostics, is creating a blood test tool that could be rolled out across the world.

Patients would provide a sample of their blood, which would be then be analysed to look at levels for the protein biomarker.