EXPRESS INFORMER > Health & Medicine > Blind people could one day see with high-tech glasses (which have the backing of Stevie Wonder!)

But science is edging closer towards allowing blind people to see again — without using their eyes.

Researchers are developing a pair of high-tech glasses with a built-in camera that ping images wirelessly to the brain.

The gadget bypasses nerves between the eyes and the brain, which become damaged in most cases of blindness.

A team of Dutch experts are trialling it in Eindhoven, which has been described as ‘the place to be’ when it comes to blindness research.

Similar technology has been backed by legendary American musician Stevie Wonder who lost his sight as a baby.

A number of experimental therapies and gadgets for incurable blindness have emerged over the past decade amid medical advances.

Among those currently in the works are bionic eyes being trialled in the US and UK, and a trial using gene-editing tool CRISPR to cure genetic blindness. 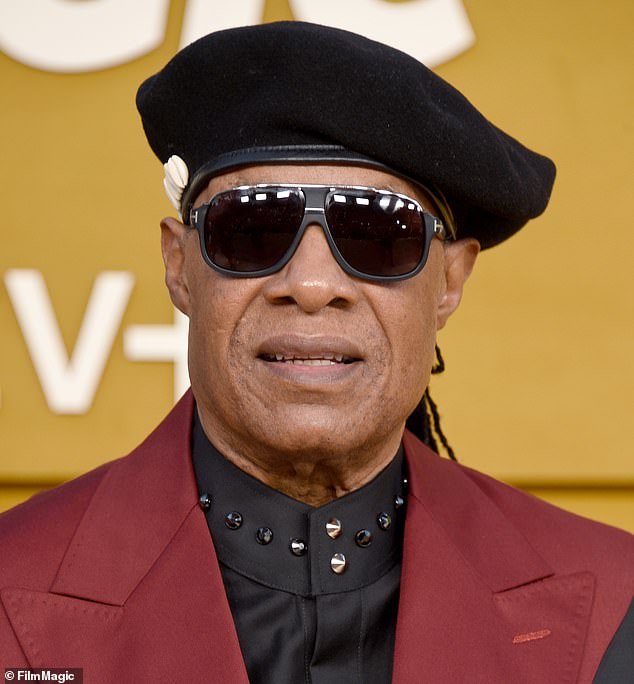 Stevie Wonder, now 71-years-old, who made such hits as ‘Superstition’ and ‘Isn’t She Lovely’ became blind shortly after he was born and has been impressed by similar glasses to the ones being developed

How do the glasses work?

What’s the technology behind the glasses?

An in-built camera takes a picture of the object, place, or person a blind individual wants to identify.

A computer inside the glasses then process the image that is then transmitted wirelessly using radio waves.

A transmitter installed under the blind person’s skin near the back of their neck/skull then picks up this signal.

The signal is then converted into electrical messages which are sent via over 1,000 electrodes connected to the blind person’s visual cortex.

These electrical messages active parts of brain which would normally process similar information from the eyes, creating an image a blind person can see.

Where is it being developed?

Who is working in it?

A consortium of Dutch research organisations are working on the project, called NESTOR.

What stage are the glasses at?

Scientists have tested the implant on blind monkeys which, according to scientists involved, were able to recognise ‘characters, moving objects and lines’.

They are now working on trying to increase the number of electrodes in the implant to improve image quality.

How much will it cost?

Unknown but similar technology in the US has been reported to cost £110,000.

The latest glasses are being developed as part of the NESTOR project, which aims to develop a ‘neuroprosthesis’ – a device capable of generating visual images in the brain.

A consortium of Dutch institutions, including the Eindhoven University of Technology, are working on the project.

The glasses work by taking still pictures using an inbuilt camera at the click of a button.

The images are then transmitted wirelessly to a tiny chip installed on a blind person’s visual cortex using a combination of radio waves similar to those used Wi-Fi and Bluetooth technology.

The process is similar to the natural signals the eyes send to this part of the brain was part of our sense of sight.

This part of the brain normally translates messages received by the eye into images, but the researchers believe it’s possible to replicate this using tiny electrodes to stimulate the brain cells.

The scientists have not yet tested their implant on humans but lab tests and experiments on monkeys have been promising.

Developers hope their wireless model will overcome some of the shortcomings of previous implants, which were directly connected to glasses, risking infection.

No release date or potential cost has been published, but similar technology in the US costs about £110,000, which excludes the surgery to install a chip.

Adedayo Omisakin, a researcher from Eindhoven University of Technology, is part of a two-man division working specifically on the wireless implant for four years.

He said bypassing the eye and going directly for the brain the technology could address the root cause of blindness for most people living with the disability.

‘Many blind people have damaged nerves between the eyes and the brain, which is why our only option is to directly stimulate the visual cortex,’ he said.

He added that transmitting this data wirelessly would offer numerous benefits to blind people’s lives.

‘This not only prevents infections in the brain area from occurring, but also makes patients much more mobile,’ he said.

Mr Omisakin said the current version of the chip consists of a staggering 1,024 total electrodes, there are broken down into 16 different groups which would send electrical signals to different parts of visual cortex creating an image. 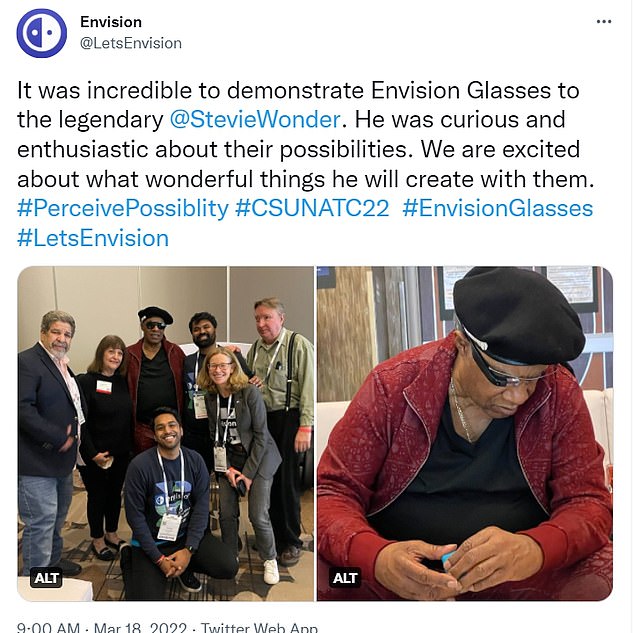 Multi-Grammy Award winning musician Stevie Wonder, was reportedly ‘enthusiastic’ about a version of the glasses, made by company Envision, that takes photos using a camera and then describes them audibly to the wearer, granting blind people more independence. 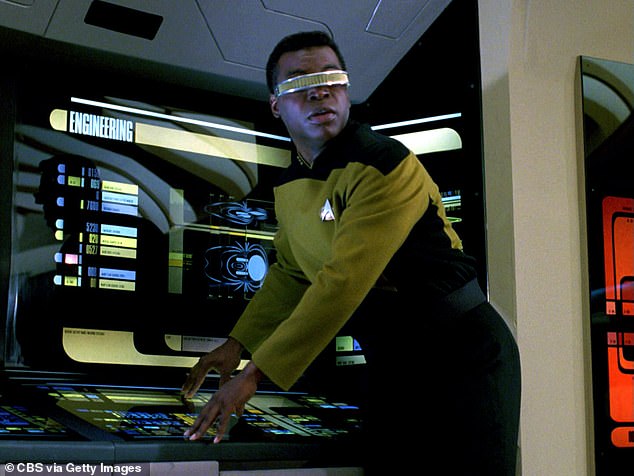 Scientists one day hope to develop glasses that can help blind people see again. Such technology has previously been the domain of science-fiction , such as is the case in the character Geordi La Forge (played by LeVar Burton) in Star Trek: The Next Generation

The main transmitter for the implant would be located underneath the skin at the back of the neck with wires then connected it to the visual cortex.

‘This way, we won’t have any unnecessary signal loss induced by the skull,’ he said.

Through rigorous testing, the scientists have managed to get the power consumption of to less than single milliwatt, many thousands of times less than the power used in even an energy efficient lightbulb.

Previous attempts to install similar chips inside blind people’s brains led to patients having epileptic seizures as electricity coursed through their skulls.

Blind patients were able to recognise family members for the first time in years after volunteering for a pioneering gene-editing experiment.

Michael Kalberer, 43, and Carlene Knight, 54, both suffer from an incurable eye disease which robbed them of their vision in adulthood.

In 2021, they were among seven patients who allowed scientists to modify their DNA by injecting them with the gene-editing tool CRISPR.

While their vision has not been fully restored, they are able to see colors, navigate hallways and make out silhouettes.

Mr Kalberer, from Long Island, revealed he was able to recognise relatives on the dancefloor of his cousin’s wedding, something which had been impossible for years.

The pair signed up to receive the experimental treatment at the Oregon Health & Science University in May.

It was the first time CRISPR – which has shown promise in treating conditions like sickle cell disease — had ever been used to edit a person’s genes inside their body.

Researchers from the Netherlands Institute for Neuroscience are also involved in the project and have tested the chips on monkeys.

Mr Omisakin said the monkeys were able to recognise ‘characters, moving objects and lines’ although he added further-testing was needed to see if images quality could be increased.

‘The number of electrodes eventually needs to increase further if we want to have images of a usable quality,’ he said.

Mr Omisakin added that he could see the technology being ready for wide-spread use for blind people within the next decade.

There have been plenty of blindness gadget breakthroughs in recent years, however none are widely available as yet.

Brain Implants have already been trialled in the US by company Second Sight in 2019.

The resulting images were described as 1980s-style ‘grainy security footage’ and could only be used a few hours a day.

But participants said being able to see some semblance of their loved ones in real time as ‘awe-inspiring’.

Patients needed six months to adapt to the implants so they were ready to receive signals from the camera.

People can currently apply to be fitted with Second Sight’s latest version of the technology with the company claiming to have fitted over 350 people with their devices to date.

Second Sight does not publish the cost of such devices, saying it depends on a person’s individual medical condition and insurance plan, but reports suggest its cost around £110,000, ($150,000), excluding surgery.

Other similar technology, such as one installed in the eye of an 88-year-old British grandmother earlier this year, avoid the brain entirely, instead installing an implant in the eye itself to help process images.

And completely different technology has used gene-therapy to restore some or most of the vision in some blind patients by re-growing and replacing damaged tissues in the eyes.

Meanwhile, Stevie Wonder was reportedly impressed by a pair of high-tech glasses developed by Dutch start-up Envision, which he tried on at a tech-fair in the US in March.

These glasses, like the NESTOR project’s, use a camera but instead of transmitting the information to the brain an AI-program inside the glasses interprets the image and audibly describes it to the wearer.