After a spine-tingling vocal and piano performance, crowd favorite Kodi Lee, who is blind and autistic, was crowned the winner of America’s Got Talent.

The California-born breakout star, 23, was visibly in disbelief as confetti fell and his name was announced. Earlier in the evening, Kodi had sent viewers on an emotional roller coaster as he performed the track You Are The Reason in a stirring duet with Grammy Award-winner Leona Lewis.

As he was ultimately named victorious, he said, ‘I feel so amazing; unbelievable’ as he realized he had won the $1 million prize.

Victorious! Kodi Lee, pictured, was crowned the winner of the 14th season of America’s Next Talent after his incredible performance 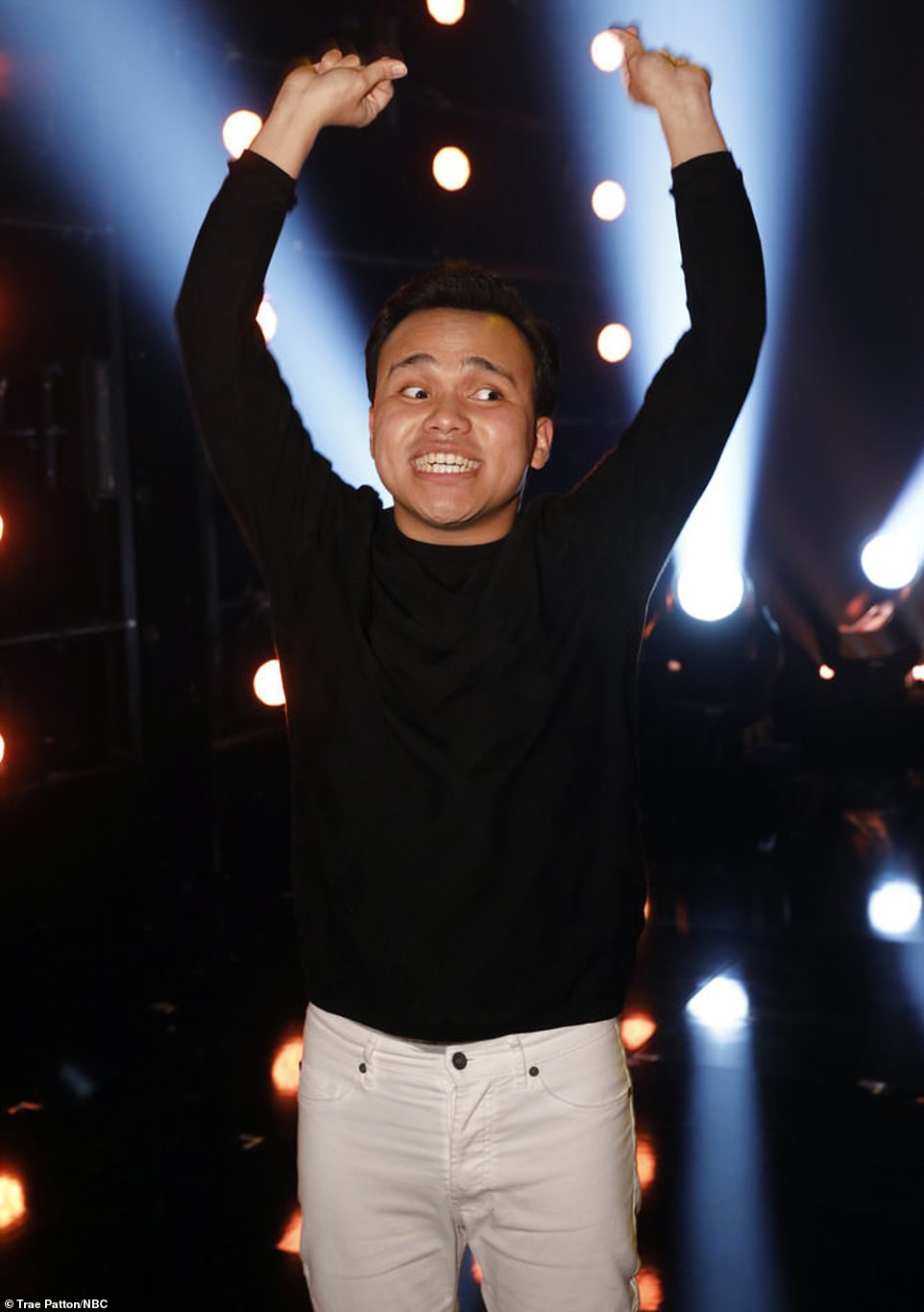 The winner: Inspirational blind and autistic singer Kodi Lee, 23, was named the winner of season 14 of America’s Got Talent 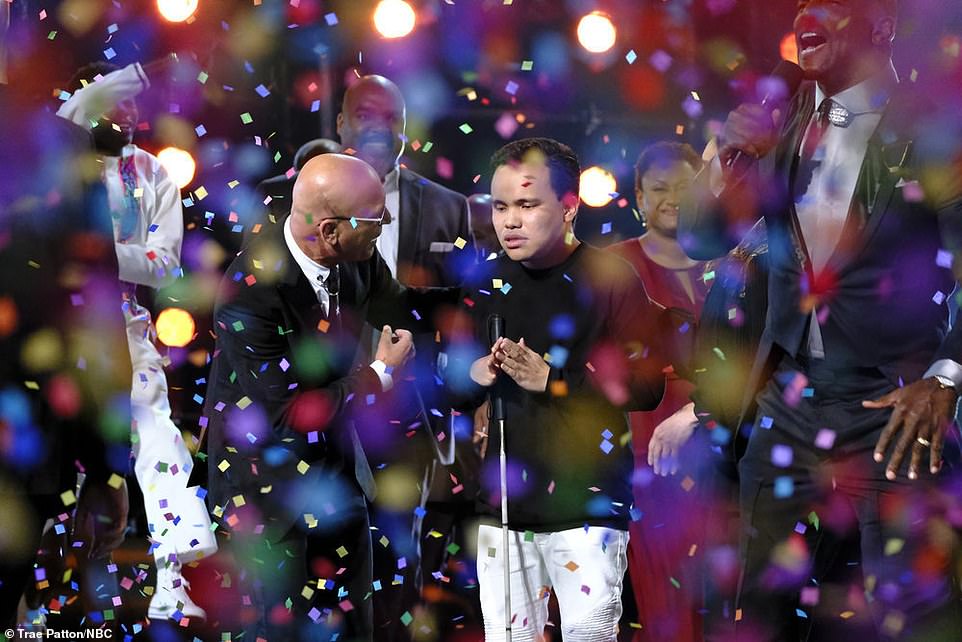 After performing among the final 10 on Tuesday, all eyes were on Kodi for Wednesday night’s tense final.

However, after his sensational performance with chanteuse Leona, 34, he seemed to practically have the whole thing sewn up.

Leona, who herself won popular UK talent search contest X Factor in 2006, gave a powerful performance of the hit song alongside him. The British star appears with singer Calum Scott in his original version.

The judges – Simon Cowell, Gabrielle Union, Julianne Hough and Howie Mandel – were visibly speechless and rose to their feet when the song finished.

It’s not the first time either; the judges have been giving Kodi standing ovations since he entered the contest in May.

Simon had previously called the singer ‘extraordinary’ and said he had a ‘beautiful tone’.

‘Thank you so much for trusting us on this show. I’m going to remember this moment for the rest of my life,’ Simon told Kodi in a memorable moment.

It all came down to Kodi and the Detroit Youth Choir before host Terry Crews, 51, announced that he had won.

Kodi jumped for joy while standing next to his mom Tina and was congratulated by everyone around him as indoor fireworks lit up the stage.

Kodi was the ‘golden buzzer’ pick of new judge, actress Gabrielle, 46, earlier in the season – ensuring he would progress straight through to the live finals. 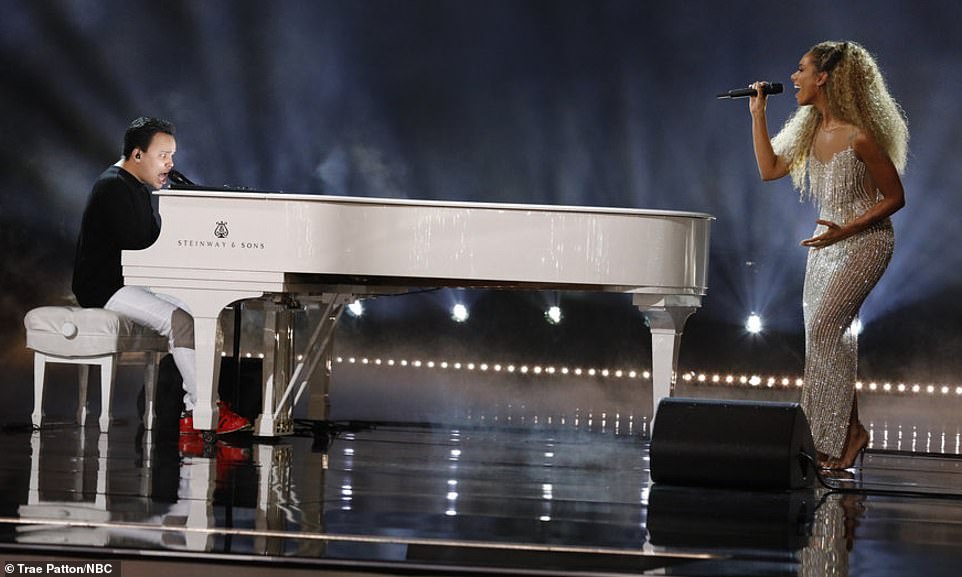 Sweet duet: Leona Lewis and Kodi performed a duet of Calum Scott’s You Are The Reason 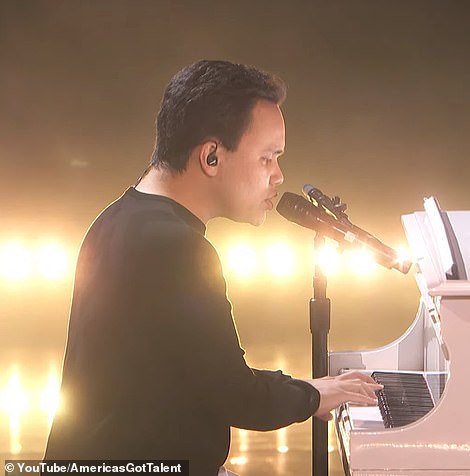 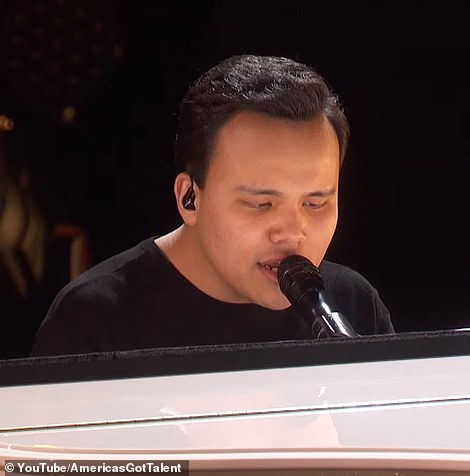 ‘Beautiful tone’: Kodi, pictured, has been praised by judge Simon since the beginning 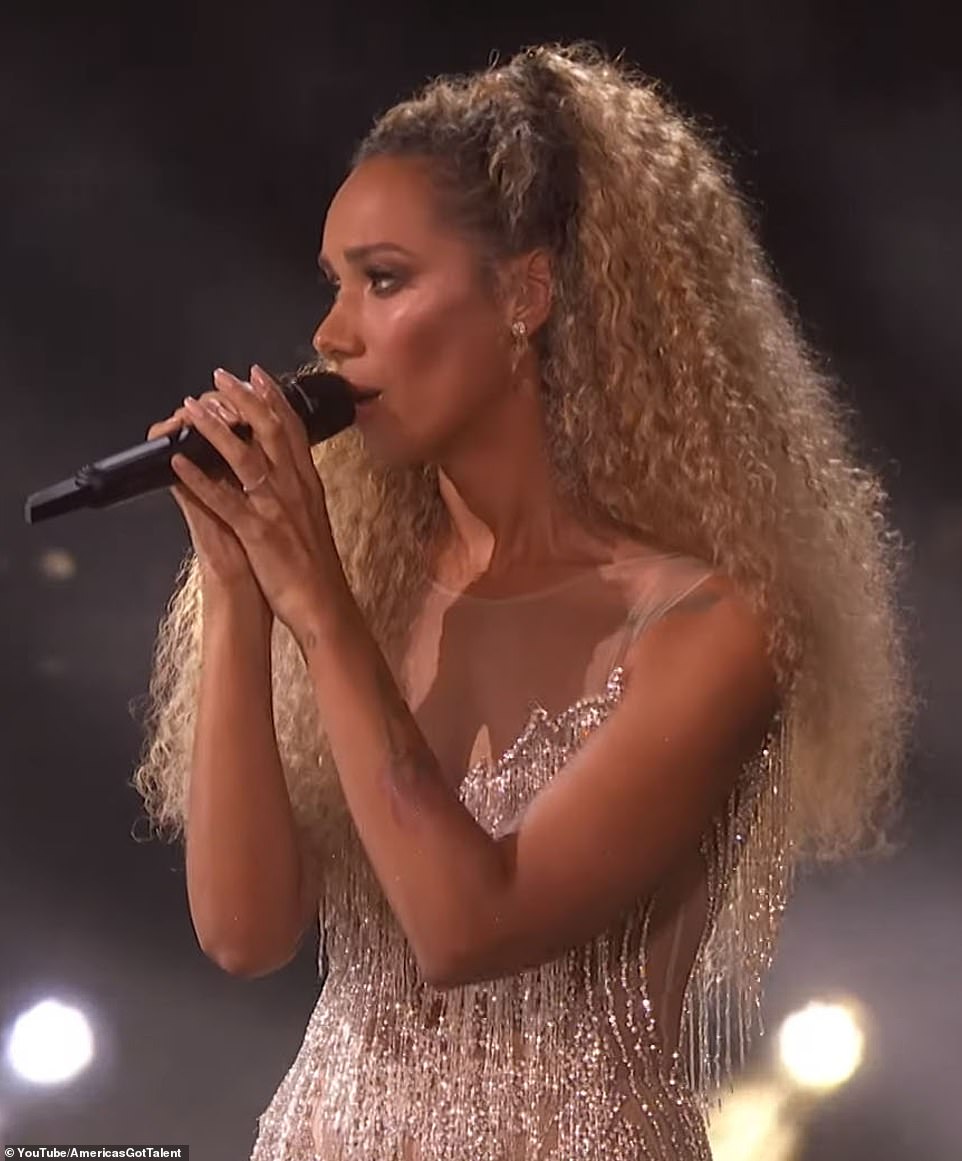 Voice of an angel: Kodi was joined by chart topper Leona Lewis, pictured, for his all-important final performance 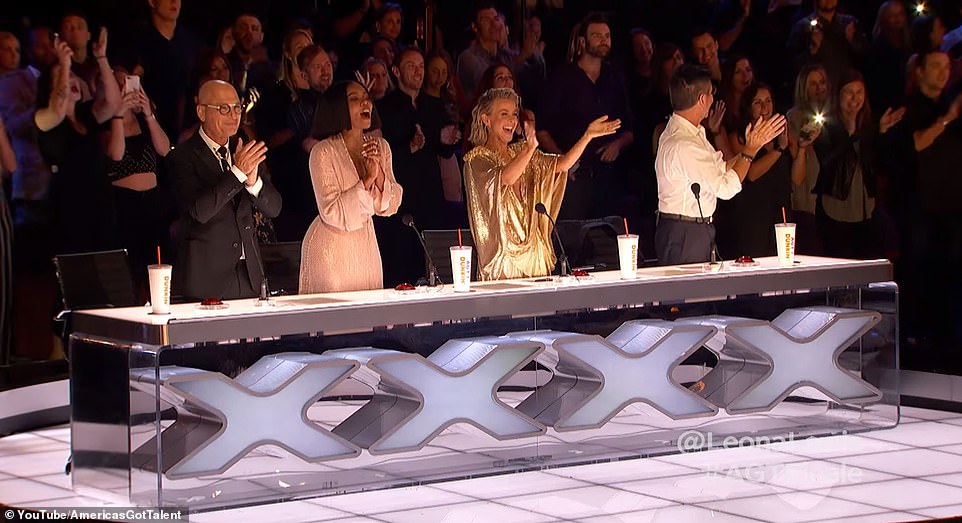 Standing ovation: The judges could hardly contain their applause after Kodi and Leona’s performance

Gabrielle previously gushed over Kodi, saying he ‘has changed the world’.

‘He changes every room he enters. And when he said, ”I would be lost without you,” I think the whole world would be lost if we had not found Kodi Lee.’

She was referring to his performance on Tuesday night, during which he sang Freya Riding’s track I Would Be Lost Without You while playing the piano.

Earlier this summer, Kodi had left viewers – and judges – in tears with a viral performance of A Song For You by Leon Russell.

The audience gave Kodi a standing ovation after he finished and there was barely a dry eye left in the house.

‘I can’t stop crying!’ Julianne said, while Howie told Kodi: ‘I will tell you that all four judges and everybody in this room were up on their feet. You were wonderful.

‘Not only do we feel the authenticity of what you do, but you are a great inspiration and a great talent, and it was amazing.’

‘I know everybody needs a voice and an expression, and I really feel your heart, your passion,’ Julianne added. ‘Your voice blew all of us away. I just want to say that I heard you and I felt you and that was beautiful.’

A stunned Simon was also blown away by the performance, telling Kodi and his mother: ‘What just happened there was extraordinary. Really extraordinary. 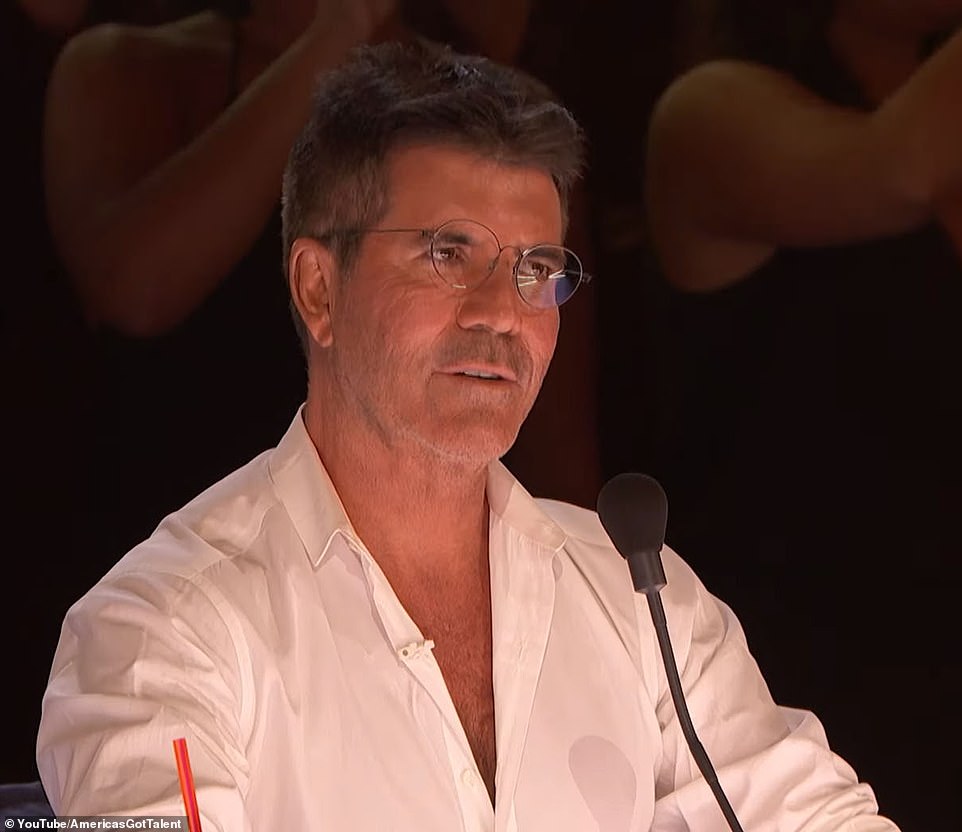 Awestruck: Notoriously hard to impress Simon was visibly emotional over the performance 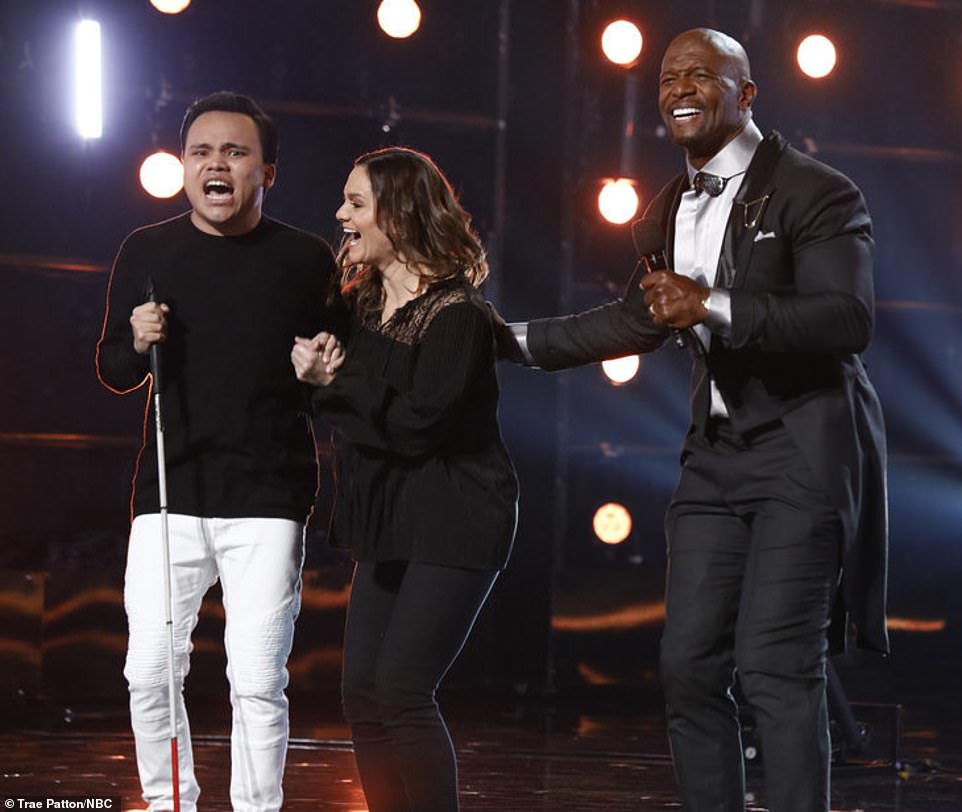 The moment: Kodi and his adoring mom Tina Lee reacted as he was named the winner 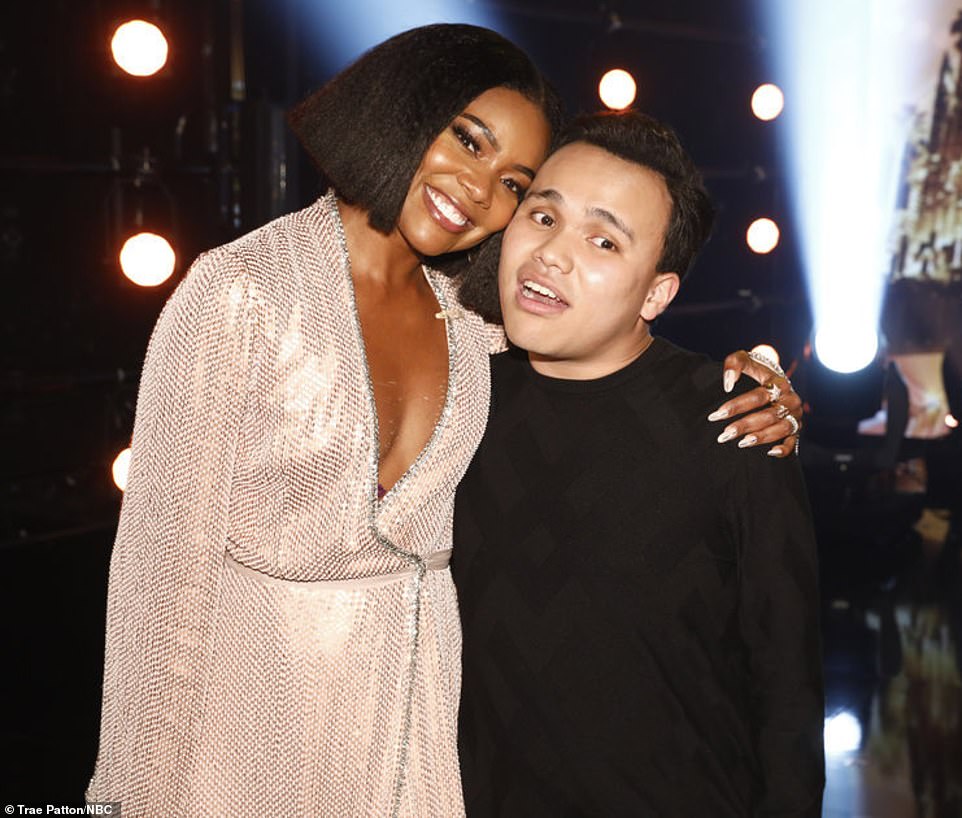 Golden buzzer: Bring It On actress Gabrielle Union celebrated with her golden buzzer pick Kodi, who was named the winner 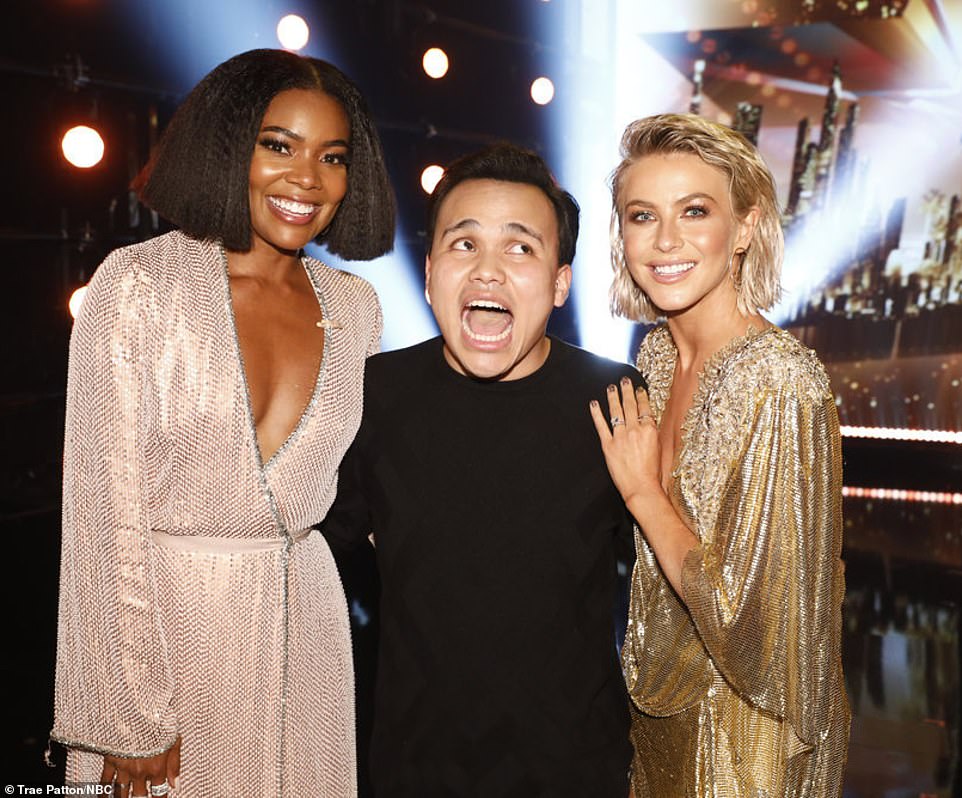 Season wrap: New judges Gabrielle and Julianne celebrated with season 14 winner Kodi who seemed in total disbelief over his win

‘I don’t know what it’s like to live in Kodi’s world – all I can tell is that you obviously have an amazing relationship, the two of you. And your voice is absolutely fantastic. You have a really beautiful tone.

‘Thank you so much for trusting us on this show. I’m going to remember this moment for the rest of my life.’

And it wasn’t just those in the theater that were left in awe of Kodi’s talents – social media was also flooded with posts from stunned viewers praising the 22-year-old’s incredible abilities, including Oprah Winfrey.

‘Loved this moment so much!’ she wrote, before admitting: ‘Stood up and cheered in my living room.’ 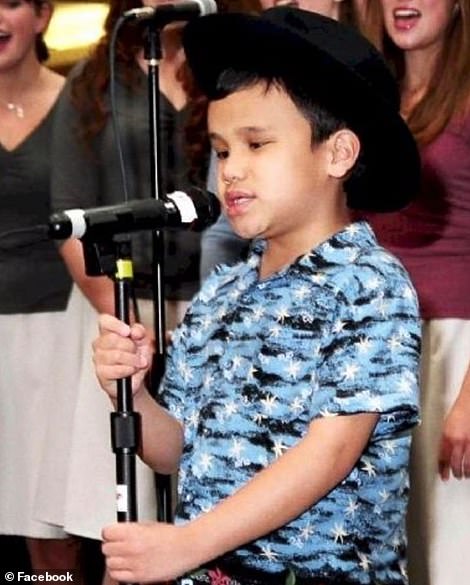 Talent: During his first performance on the show, Kodi’s mother Tina explained that music ‘saved his life’ by helping him to ‘withstand living in this world’

When he made his first appearance on the reality series, Kodi’s mom Tina told TV cameras that they had discovered her son’s love for music when he was a kid.

‘We found out that he loved music really early on,’ she said. ‘He listened and his eyes just went huge. And he started singing, and that’s when I was in tears, because I realized he is an entertainer.

She added that music had saved his life.

‘Through music and performing, he was able to withstand living in this world, because when you’re autistic, it’s really hard to do what everybody else does,’ she shared.

‘It has actually saved his life, playing music.’

According to Kodi’s official website, the talented 22-year-old was born with optic nerve hypoplasia, a congenital condition which means the optic nerve has not fully developed, and had to undergo life-saving surgery when he was just five days old.

‘Born with optic nerve hypoplasia, surviving a life-saving surgery at five days old, and being diagnosed with autism at an early age has never stopped Kodi from reaching for his dreams,’ his online biography states.

‘Kodi continues to pursue his musical career and his dream is to be a “rock star” performing for thousands of fans.

‘Any opportunity Kodi has to perform is a good day for him, and the bigger more energetic the audience, the more he loves to shine.’ 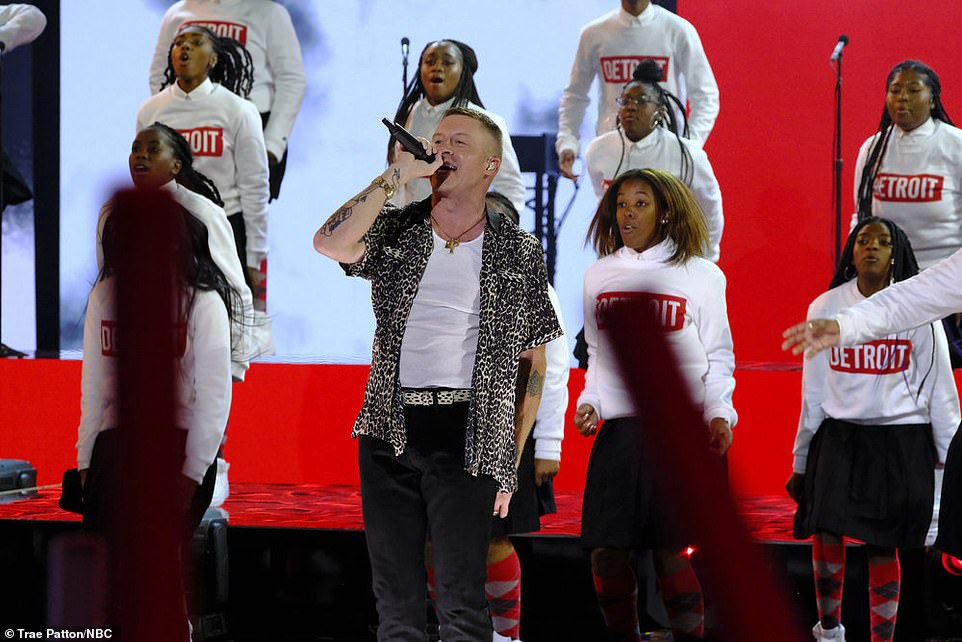 Backing choir: Macklemore had the voices of the Detroit Youth Choir backing him up 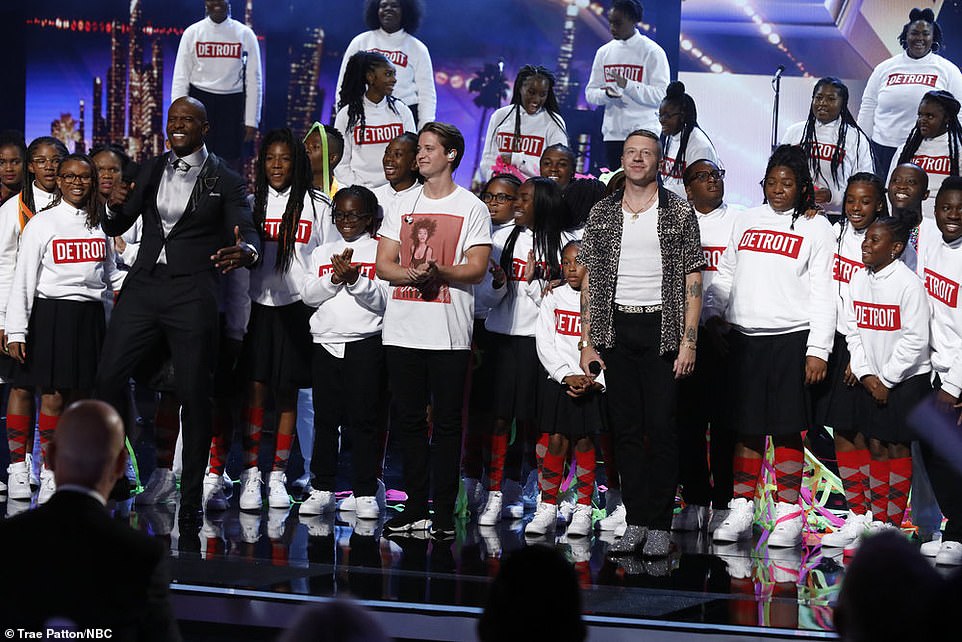 Live show: Kygo and Macklemore got the show off to a strong start with the choirs 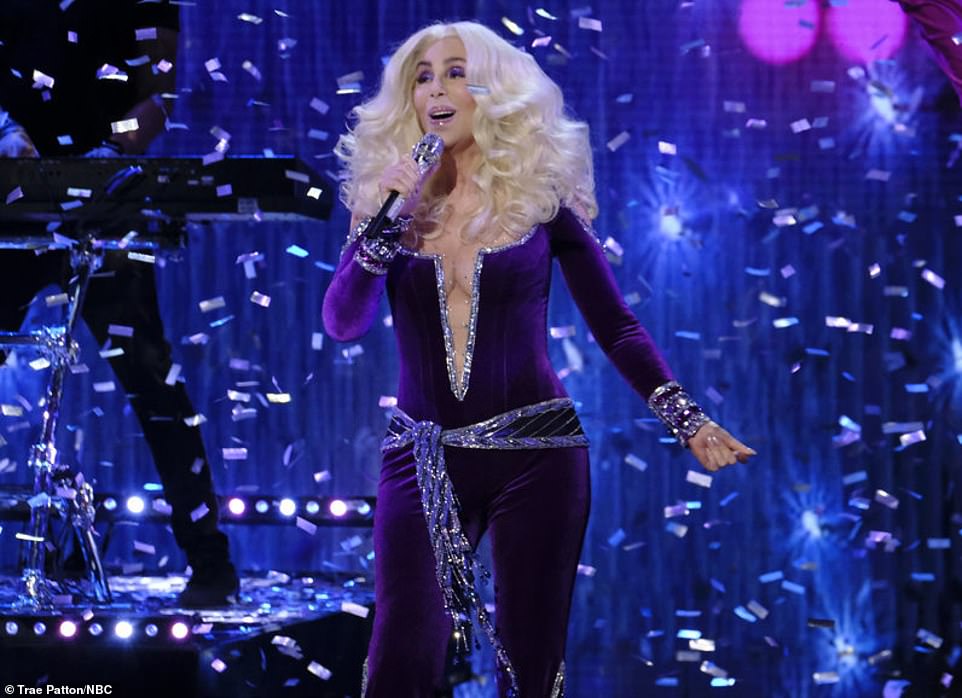 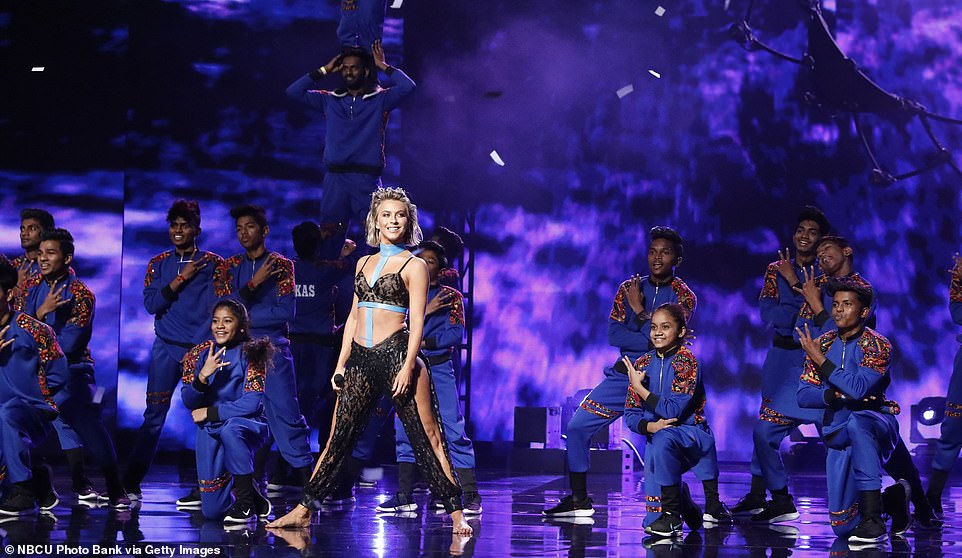 Norwegian DJ Kygo, 28, performed Higher Love with finalists Ndlovu Youth Choir and Detroit Youth Choir at the start of the show and they were joined by rapper Macklemore, 36.

Judge Julianne Hough also belted out the world premiere of her new single Transform that she sang alongside finalists V Unbeatable.

She was tossed in the air while dancing with the acrobatic dance troupe and showed her dancing ability in choreographed moves with the finalists. 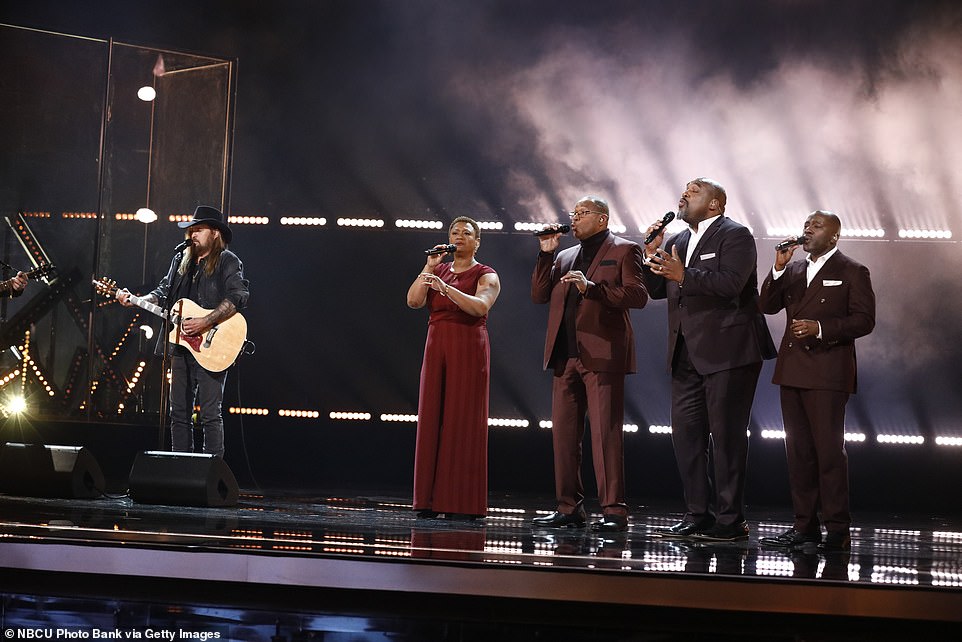 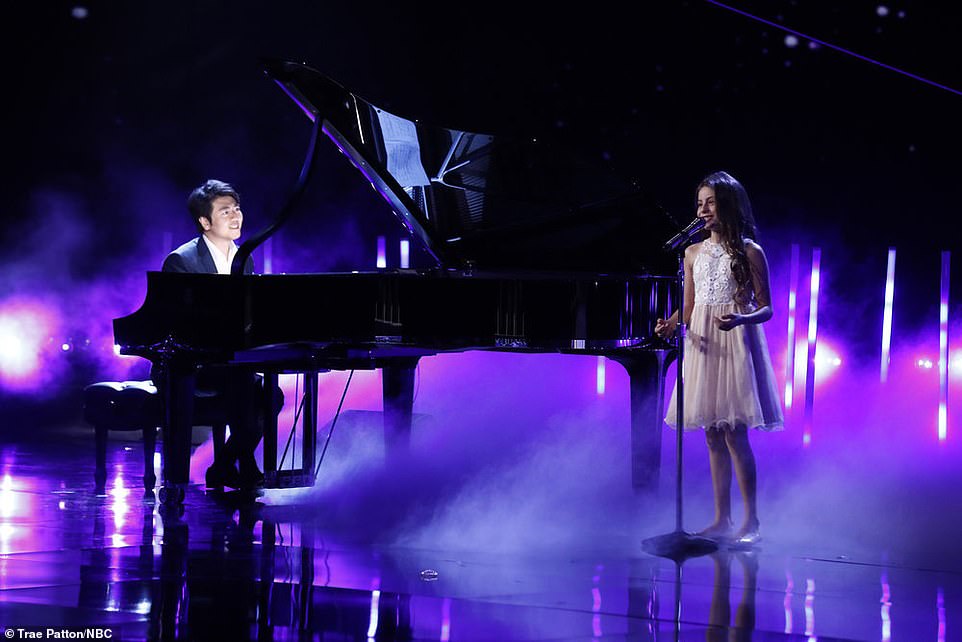 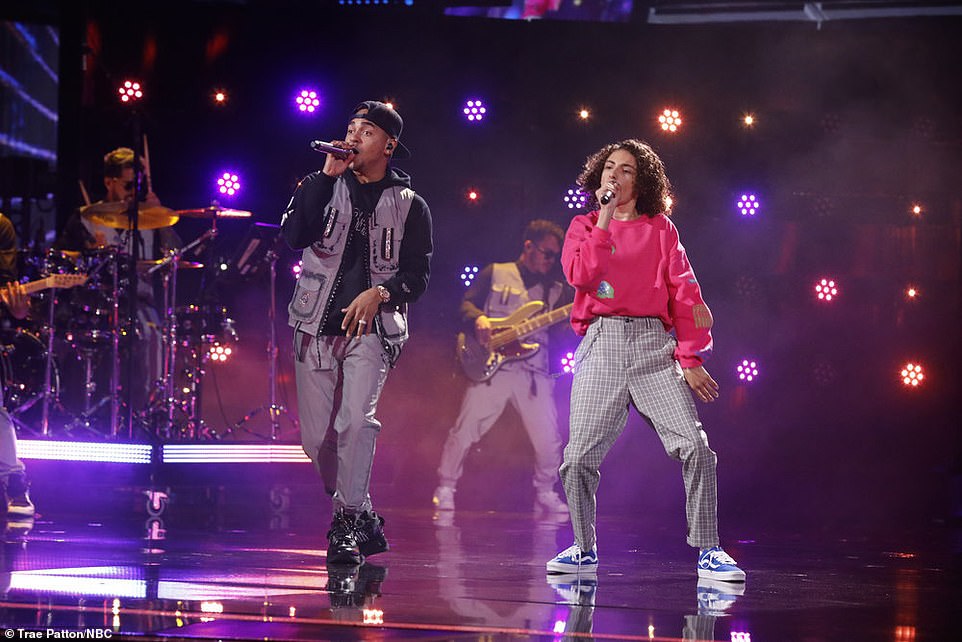 Other finalists also teamed up with stars for performances including Voices Of Service singing Some Gave All with Billy Ray Cyrus, 58.

Emanne Beasha who turned 11 on Wednesday also performed with world-renowned pianist Lang Lang, 37, who treated viewers to a piece from his new album Piano Book.

Stand-up comic and finalist Ryan Niemiller revealed that he wanted to be a pro wrestler as a child and took part in a skit with pro wrestler Chris Jericho.

Benicio Bryant also sang with Ozuna in English and Spanish.