By Ian Randall For Mailonline and Stacy Liberatore For Dailymail.com

BlackBerry reached the end of an era today, having pulled the plug on support for its classic smartphones some 22 years after the devices first hit the market.

The move will impact devices running BlackBerry 7.1 and earlier, BlackBerry 10 and BlackBerry PlayBook OS 2.1 — although Android-powered models will be unaffected.

Unsupported systems will stop receiving software updates and, as a result, will ‘no longer reliably function’, the firm warned in a statement released last September.

This, the Canadian company added, has the potential to affect core operations like the ability to send and receive calls (including to emergency services) and texts.

Data usage may also be affected, while applications like BlackBerry Link, Desktop Manager, World, Messenger and Blend will have ‘limited functionality’.

BlackBerry reached the end of an era today, having pulled the plug on support for its classic smartphones (like that pictured) some 22 years after their devices first hit the market

BlackBerry first hit the market in 2000 and became a must-have for professionals, as the smartphone allowed users to easily write and send emails.

The smartphones saw a dramatic increase in popularity from 2001 to 2007, as they made their way to new markets across the globe.

However, BlackBerry’s supremacy was topped in 2016, losing the title of top device to that of Apple’s ascendant iPhone.

And in the end, it was arguably BlackBerry’s failure to adapt, lack of consumer insight and poor design that led to its demise in 2018 — when the company announced that it would no longer be producing the smartphone.

The last version of the BlackBerry OS the firm released dated back to 2013, so the devices set to lose support are very old, Ars Technica have reported.

‘The termination of these service offerings and infrastructure will also impact functionality for applications,’ BlackBerry said in a statement.

‘There is no impact to the new BlackBerry Protect which is an AI-based endpoint security solution,’ the firm said. 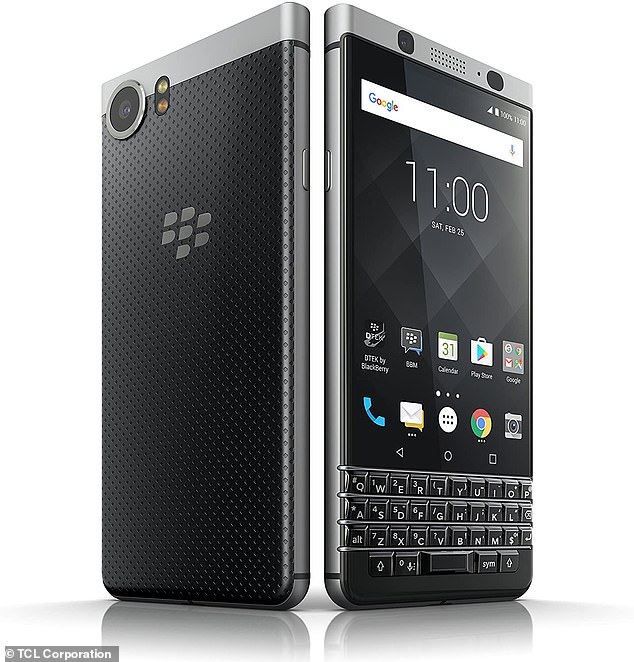 Android-powered BlackBerry devices — like the Key2, pictured — will operate just as normal

In 2020, a Texas firm named OnwardMobility announced that it would be making a 5G Android-powered BlackBerry device with a full QWERTY keyboard to release in 2021 — however, the promised smartphone has yet to actually materialise.

‘BlackBerry smartphones are known for protecting communications, privacy, and data. This is an incredible opportunity for OnwardMobility to bring next-generation 5G devices to market with the backing of BlackBerry and FIH Mobile.’

The OnwardMobility website still mentions the Android-powered Blackberry, but still only lists it as being at the pre-order stage, with no suggestion as to when it will actually be released.

IS YOUR BLACKBERRY AFFECTED?

These devices will lack the ability to receive over the air provisioning updates and as such, this functionality will no longer be expected to reliably function, including for data, phone calls, SMS and 9-1-1 functionality.​​​​

Android-powered BlackBerry devices, however, will operate just as normal.

Below is a list of devices, software, applications and service offerings that are affected:

BlackBerry 7.1 OS and earlier – including but not limited to:

*Note: no impact to BBM for Enterprise and BBM Enterprise for Individual Use (BBMe), which will continue to be available and will leverage BlackBerry ID on other platforms.