The #ShareTheMic campaign aims to amplify black female voices and will see various females – including Bernardine Evaristo and June Sarpong – taking over the Instagram accounts of 70 high-profile white women with large social media audiences, reaching a total of over 175 million followers.

The selected women will share their stories and experiences with the intention of forging vital relationships promoting activism in the entertainment industry.

Amongst the pairings include entrepreneur Sharmadean Reid will run the account of makeup artist and founder Charlotte Tilbury. while Victoria Beckham will be trading places with television broadcaster June Sarpong. 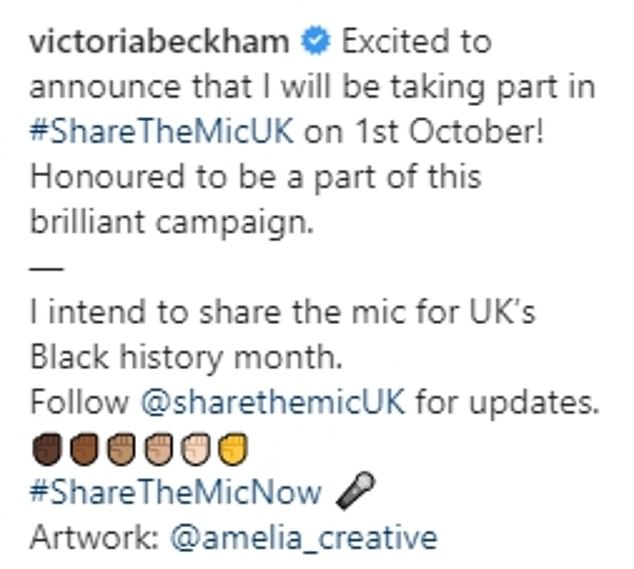 Taking to Instagram, the former Spice Girl penned: ‘Excited to announce that I will be taking part in #ShareTheMicUK on 1st October. Honoured to be a part of this brilliant campaign’ (pictured)

Elsewhere, Emma Dabiri, author of Don’t Touch My Hair, will take over Gwyneth Paltrow’s account, and Vanessa Kingori, publishing director at British Vogue and one of the campaigner’s organisers, will run the social media account of Kourtney Kardashian.

The campaign – which was created by Bozoma Saint John, Luvvie Ajayi Jones, Glennon Doyle and Stacey Bendet Eisner – has come to the UK months after its success in the US in June.

A statement from organisers released at the time read: ‘Today, more than ever, it is NECESSARY that we create a unifying action to centre Black women’s lives, stories, and calls to action,’ the statement added. ‘We need to listen to Black women.’

‘The intention of this campaign is to magnify Black women and the important work that they’re doing in order to catalyse the change that will only come when we truly hear each other’s voices.’ 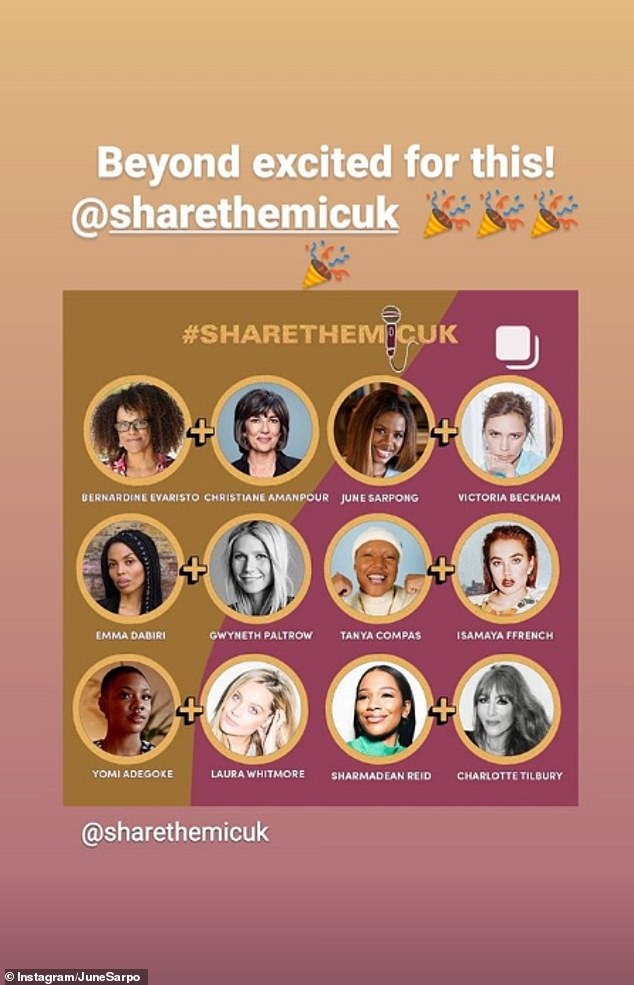 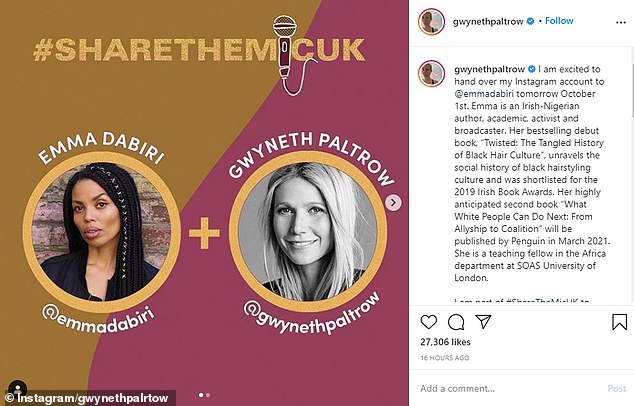 In a video shared to her Instagram account today, fashion designer Victoria Beckham, who said she is ‘honoured’ to be a part of this ‘brilliant’ campaign, explained:

‘I found her inspiring then but following her career has just been beautiful to watch and I feel incredibly humbled to be sharing the mic with June.

Alongside the video, she penned: ‘June is an incredible broadcaster and speaker. She is the BBC’s first ever Director of Creative Diversity, is the co-founder of the network Women: Inspiration and Enterprise and has written three books – her latest,

‘The Power of Privilege, How White People Can Challenge Racism, is out today and I can’t wait to read it. I’m so excited for you to hear all that June has to say today. Welcome, June! Kisses xx’

Amongst the other pairings include British journalist Yomi Adegoke taking over the social media account of Laura Whitmore, and Booker Prize winner Evaristo running that of Christiane Amanpour – the Chief International Anchor for CNN.