A Black Lives Matter protestor is suing the police after officers ordered to cover up a ‘F*** Boris’ T-shirt.

She says she has attended more than dozen protests without being challenged by police for wearing the item of clothing.

However, the actor and founder of an immersive theatre company, said she was told to zip up her jacket by Metropolitan Police officers on Oxford Street after the June 3 protest.

She says the order came despite police officers failing to intervene at the protest itself where Ms Flynn saw banners and placards with the same slogan.

Ms Flynn, who filmed part of the confrontation and posted on YouTube, is now launching legal action and claiming the officers interfered with her right to express legitimate political opinion. 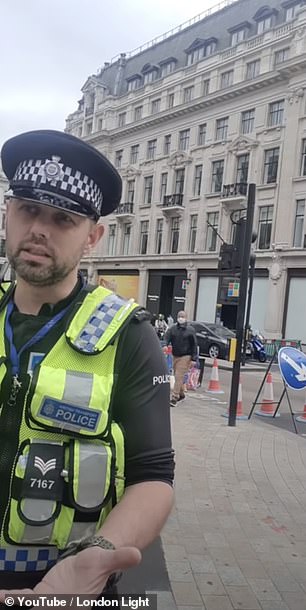 Jessie-Lu Flynn attended a BLM demonstration in central London on June 3 wearing the anti-Boris Johnson T-shirt. She was told to cover it afterwards by police

She says she was told that she was in breach of section 5 of the Public Order Act, which states: ‘A person is guilty of an offence if he – (a) uses threatening words or behaviour, or disorderly behaviour, or (b) displays any writing, sign or other visible representation which is threatening.’ 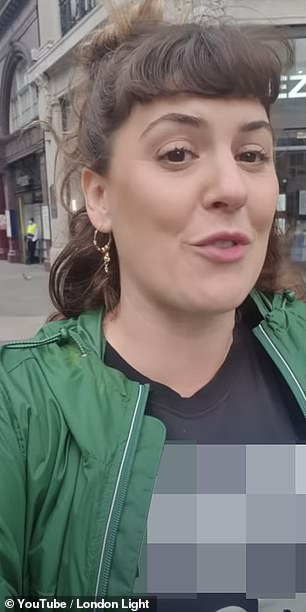 Ms Flynn, who filmed part of the confrontation and posted on YouTube , is now launching legal action

However, it is not considered an offence if police have no reason to believe there was anyone within hearing or sight who’s likely to be alarmed or distressed.

The officers who challenged Ms Flynn were from British Transport Police and told her she was in breach of the law by wearing a T-shirt that displayed an obscene word.

She told the Guardian: ‘When the police told me I had to zip up my jacket to cover up my T-shirt I thought ‘Are you serious?’ I’m very concerned about how rightwing this government is.

‘I find the way Boris Johnson has described black people and Muslims is deeply offensive.’

Her lawyers, Joanna Khan and Michael Oswald at Bhatt Murphy Solicitors, are arguing that the officers were in breach of human rights legislation.

Khan and Oswald said: ‘Being able to criticise politicians is fundamentally important in a democracy.

‘The importance of freedom of speech should be particularly clear to this prime minister who has compared women in burqas to letterboxes without any criminal sanction himself.’