A black family have declined an invite to go back to a children’s theme park in Philadelphia after two of their children were snubbed by one of the mascots.

Sesame Place was at the center of ‘racist’ allegations earlier this summer after one of the furry characters, Rosita, appeared to ignore the youngsters who were watching a parade.

But now managers at the park, which is the subject of a $25million lawsuit, have attempted to make amends by inviting the children and their family members back.

The family, however, have rejected the offer of hospitality saying the kids, who were featured in a viral video, are still too ‘traumatized’ from the furry fail.

Initially, a mother slammed the character as racist after filming Rosita seemingly ignoring her daughter and niece as they reached out to say hello during the parade in July.

The Rosita character has been cancelled by Sesame Place after the racism allegations came to light. Two little girls were seen reaching up to the character who waved a hand in a ‘no’ gesture, with the parents claiming it is because the girls were black 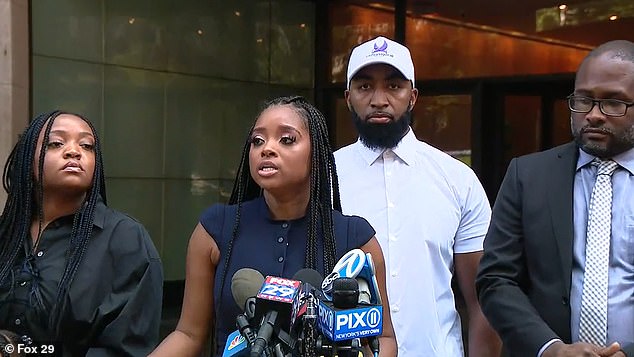 The two little girls eagerly reached out to the blue character, who was introduced to expand the diversity of Sesame Street, but who was seen wagging their finger at them, before allegedly ‘hugging the little white girl’ next to them.

The attorney for the Brown family who is leading the audacious lawsuit has said the family still wanted a full explanation as to what became of the person inside the suit playing the ‘Rosita’ character and if they are still employed at the park where they may ‘terrorize other children’ in another character costume.

Lamarr told TMZ that a meeting had been arranged between executives from SeaWorld Entertainment and Rev. Jesse Jackson together with the Browns who did not make it inside and ended up waiting in a lobby for hours instead.

There was then a follow-up meeting that occurred earlier this week between the Brown family, SeaWorld execs, and the Rainbow Push Coalition – a human and civil rights organization founded by Rev. Jackson.

The family got to voice their concerns once again and were invited back to the park. 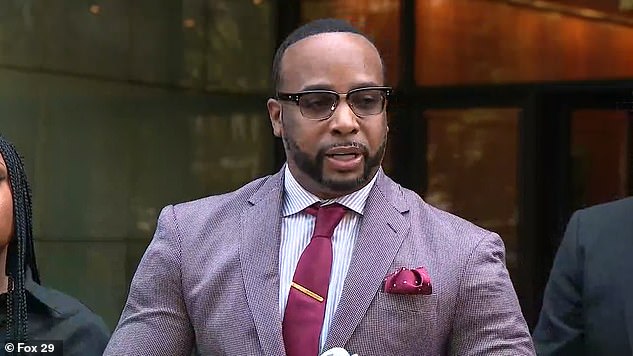 LaMarr, the family attorney, said the family still wanted a full explanation as to what became of the person playing the ‘Rosita’ character

The Browns turned down the offer because they did not want the children to ‘relive the trauma’.

Lawyer, Lamarr has said the family remain steadfast in their lawsuit against the theme park and will look at every possibly legal option available to them.

Meanwhile, Sesame Place has introduced a new set of policies since the incident which include racial bias training for their employees.

The park said they will be including a comprehensive racial equity assessment, and developing and implementing an anti-bias training and education program.

By the end of September 2022 they say that all employees will have received the training to ‘address bias, promote inclusion, prevent discrimination, and ensure all guests and employees feel safe and welcome’. 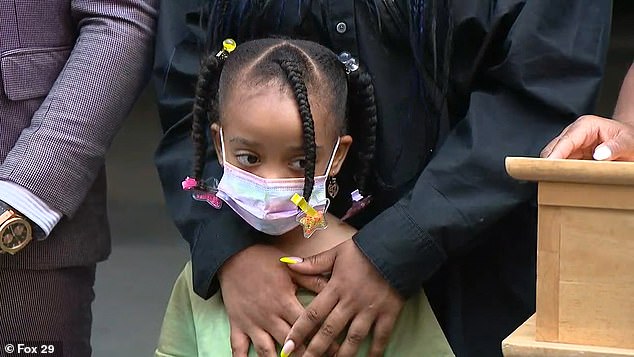 One of the young girls, Nylah Brown, stood silent at a press conference last month with her cousin reportedly in ‘isolation’ after the incident

When DailyMail.com visited the theme park last month, it fast became apparent that the attraction had all but cancelled Rosita by banning the character from meet and greets and the daily parade.

DailyMail.com revealed that the bilingual Muppet, from Mexico, appeared to be slowly but surely being erased with staff claiming she has been removed in the wake of the controversy.

Multiple buildings with the costume character’s face on them have reportedly remained closed since the incident in July, with staff claiming she has been ‘cancelled’.

Rosita’s Cocina restaurant has reportedly been closed ‘for weeks’ despite the busy summer period. 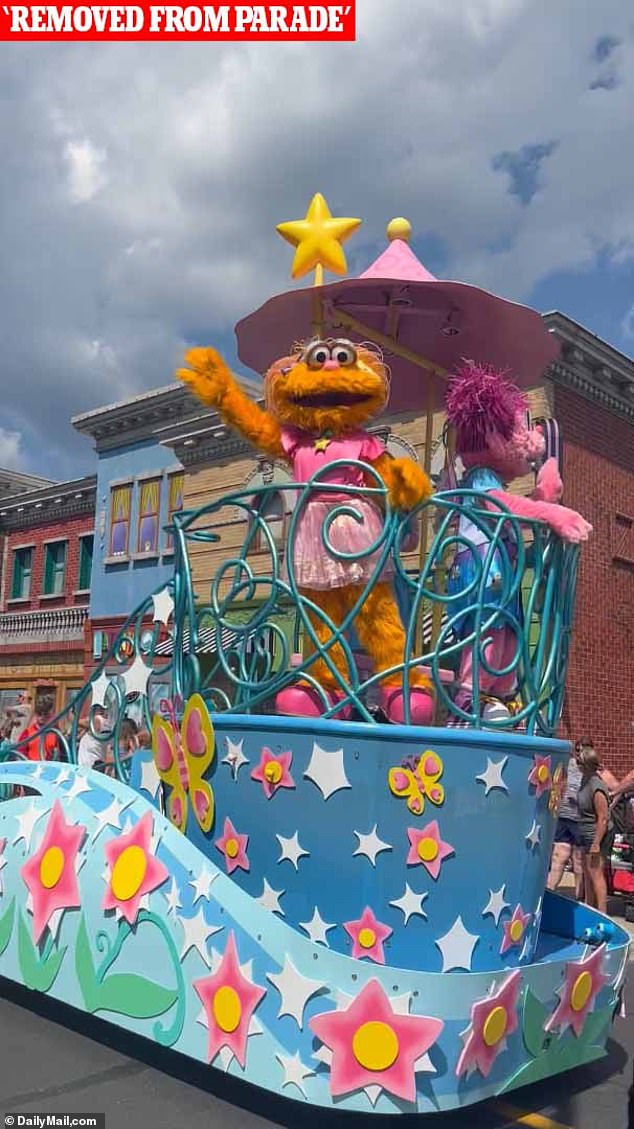 Rosita was one of the only characters who was not included in the daily parade, with staff members adding that the performers were now being told to remain on the floats

One staff member told DailyMail.com: ‘With recent events Rosita hasn’t been around much anymore.

‘She’s been taken off the parade entirely since the racism allegations.

‘None of the character’s walk the street in the parade any more, and any meet and greets for her have been called off.

‘That is all because of the allegations, they don’t want anyone potentially making the same claims.

‘Essentially, Rosita has been cancelled and I don’t think she’ll be back any time soon.’ 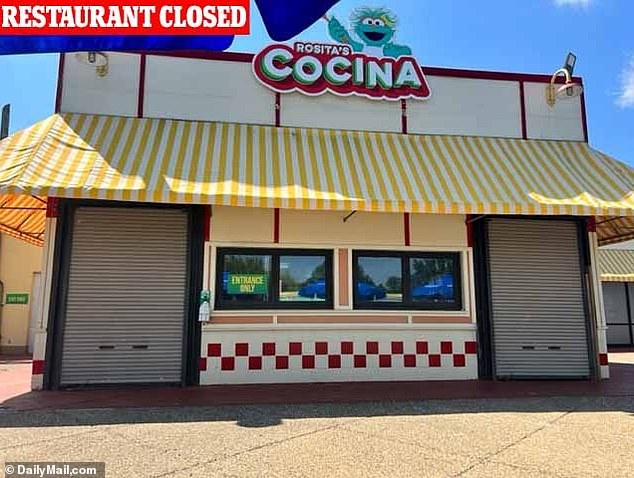 Rosita’s Cocina, a Mexican themed restaurant at the park, has remained closed since the incident with staff telling DailyMail.com that it is unlikely to open again for a while 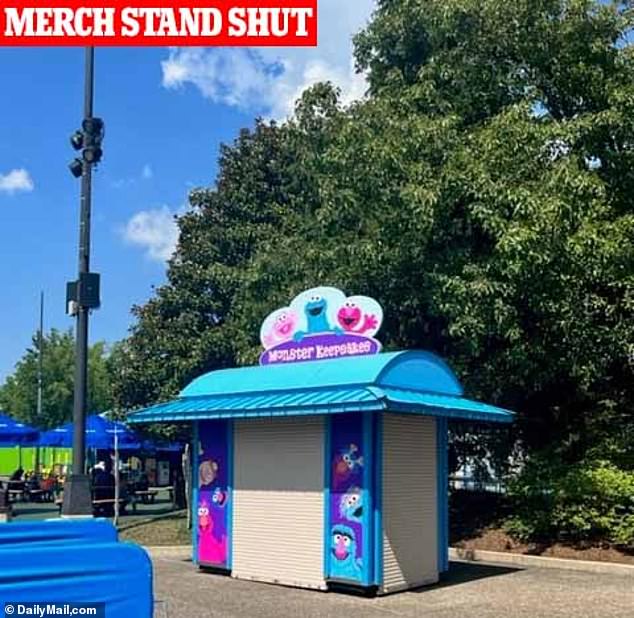 Other stands with the characters face on it were also not open during a visit by DailyMail.com, with staff confirming that Rosita had also been removed from the parade

Another said: ‘The Rosita restaurant has been closed for the last few weeks.

‘There hasn’t been a real explanation as to why, but staff are assuming it could be to do with the accusations.

‘The meet and greets have also changed recently but that could also be because of the heat with some other characters.’

The character has not been removed from the latest series of the TV show, which premiered on HBO Max in November last year.

Other staff members claimed that the characters were on rotation for meet and greets, and not all of the characters appear on the parade – including Big Bird.

But on the Sesame Place app any events with Rosita can be found by actively searching her name, with only Meet and Greets for certain characters appearing.

Rosita was one of the only characters who was not included in the daily parade, with staff members adding that the performers were now being told to remain on the floats after the allegations.

Other images of the character have been hidden by the park, with Rosita and Big Bird both being covered with a large purple structure close to a dining hall in the theme park.

Stores selling merchandise of Sesame Street also appeared to have either removed items featuring the character or having less out on display.

An empty basked in one of the stores appeared to be where Rosita figures had been but were now empty.

Mugs and other items also did not feature the character, but it is not clear if she was just not part of the main 2022 branding before the incident.

T-shirts, plush toys and various other items were also all on display for the other characters of Sesame Street, but none of the stores had a Rosita section.

Sesame Place did not respond to requests for comment from DailyMail.com regarding the removal of Rosita, but did confirm a new ‘series of initiatives’. 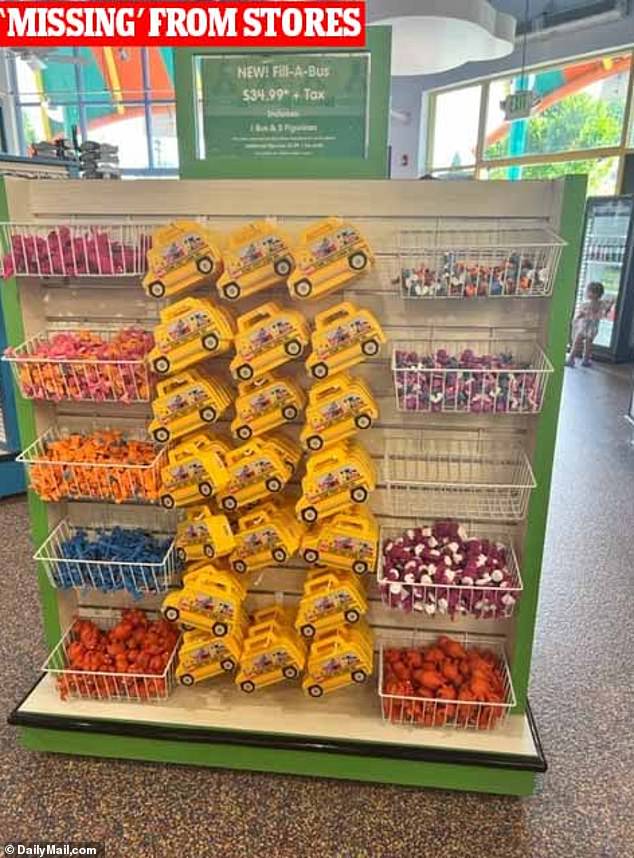 Multiple characters merchandise was available throughout the theme park, but it appeared that Rosita had been reduced in the stores – with other characters taking more precedence 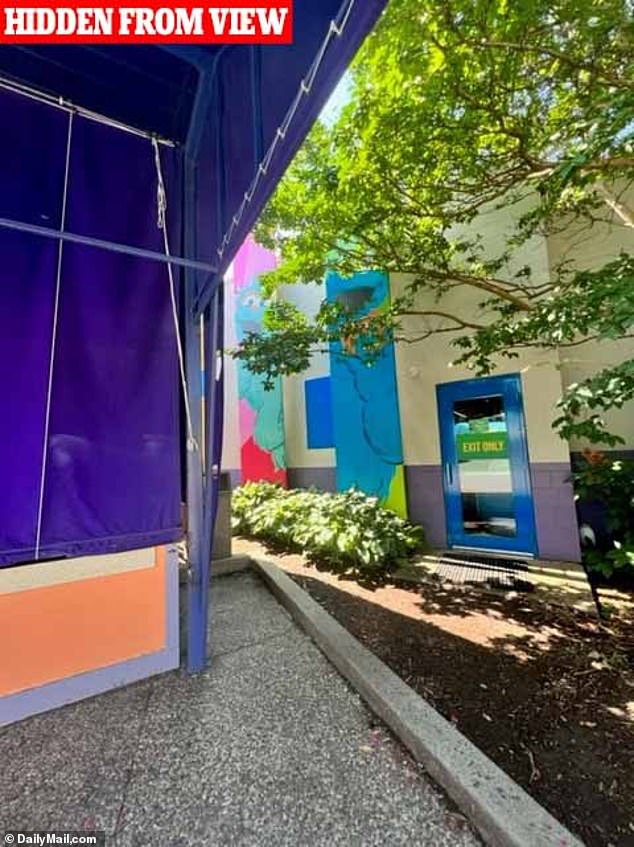 A structure had also been put in place in front of a board showing Rosita, in the middle of Big Bird and Cookie Monster, near the dining hall in the theme park 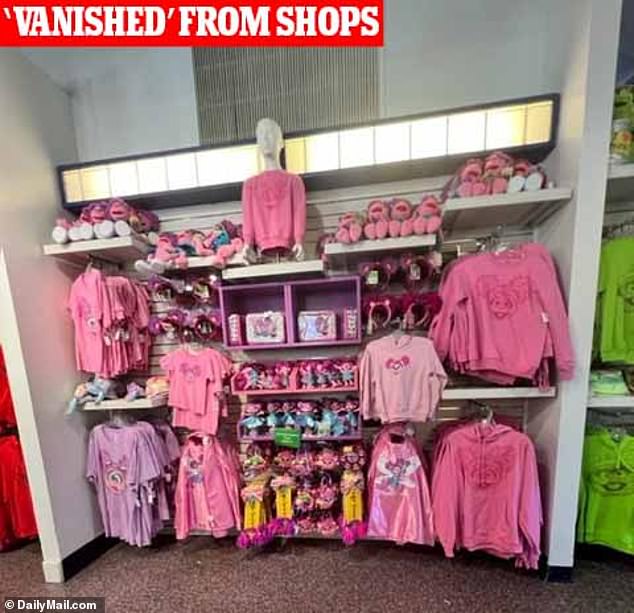 Some of the stores had a few items of Rosita merchandise, but she did not have her own section in any of the shops. Other characters such as Abby, Elmo and the Cookie Monster were all readily available

All new employees will also undergo the training, and the assessment will include engagement with both internal and external stakeholders.

In a previous statement the company, theme park officials called the now viral moment a ‘misunderstanding,’ saying the mascot likely did not see the girls due to limited vision in the costume’s unwieldy mask.

They said: ‘Our brand, our park and our employees stand for inclusivity and equality in all forms.

‘That is what Sesame Place is all about and we do not tolerate any behaviors in our parks that are contrary to that commitment.

‘We also are, and always have been, committed to making sure every family and every child has the best possible experience at our parks and we are incredibly disappointed when that does not happen.’

‘We spoke to the family and extended our apologies and invited them back for a special meet-and-greet opportunity with our characters.’

The park said the actor portraying Rosita – who was not named – ‘did not intentionally ignore the girls and is devastated about the misunderstanding.’

The statement alleged Rosita was gesturing ‘no’ to another guest who had requested they hold hold their child for a photo, ‘which is not permitted.’

The park also said the mascot likely did not see the girls due to limited vision in the costume’s unwieldy mask, which ‘sometimes make it difficult to see at lower levels’ leading actors to occasionally ‘miss hug requests from guests.’ 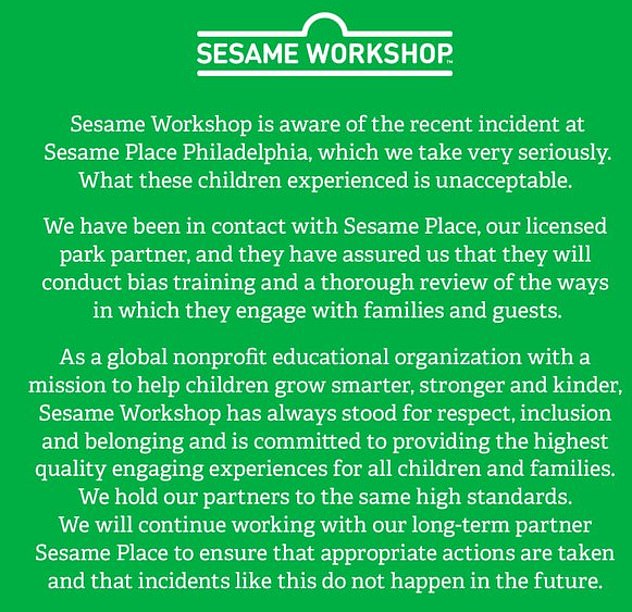 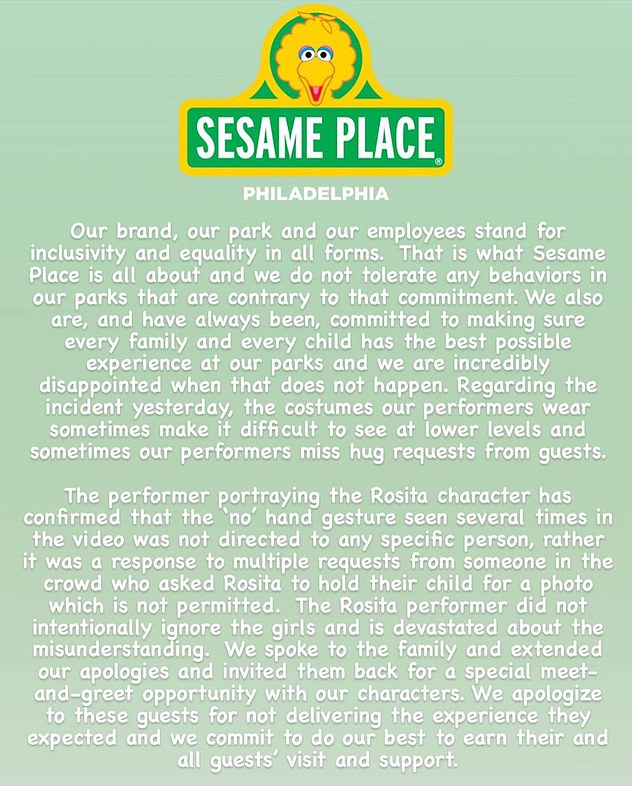 Sesame Place confirmed the incident occurred in a statement posted to Instagram on Saturday, but said it was a ‘misunderstanding’

Attorney Lamarr called the reason that the actor couldn’t see as ‘bogus’, adding ‘this is not about money’.

They are calling for the performer to be terminated, saying it is the only ‘acceptable action’ that the company can take.

Lamarr noted he has received evidence from 25 to 30 other black families of similar incidents at the Sesame Street-based theme park over the years.

Jodi Brown, the mum who filmed the incident, says that her daughter Skylar, 6, has been forced to isolate with her grandmother after the incident which caused her great distress.

The theme park has apologized about the incident since the video was posted over the weekend by Brown – who took her daughter Skylar and niece Nylah, both 6, to the park.

The family is also said to be looking to get the two girls therapy to help them cope with the apparent snub.

Sesame Workshop – which was careful to explain that Sesame Place is a licensed partner – then posted another statement on its social media last month.

They wrote: ‘What these children experienced is unacceptable.

‘We have been in contact with Sesame Place, our licensed park partner, and they have assured us that they will conduct bias training and a thorough review of the ways in which they engage with families and guests.

‘We will continue working with our long-term partner Sesame Place to ensure that appropriate actions are taken and that incidents like this do not happen in the future.’