The racial gap in COVID-19 vaccination is closing with black adults now as likely as white adults to say they’ve been vaccinated.

According to a new Pew Research Center survey, 70 percent of black adults and 72 percent of white adults have received at least one dose.

Pew’s survey found that white evangelical Protestants and those with no health insurance are most likely to remain unvaccinated.

And Republicans were much less likely to be vaccinated than Democrats.

The same survey found that 60 percent of Americans said they agreed with the statement, ‘people who choose not to get a Covid vaccine are hurting the country.’

The findings indicate that, despite continued polarization, the majority of Americans are on the same page about vaccines and other Covid precautions. 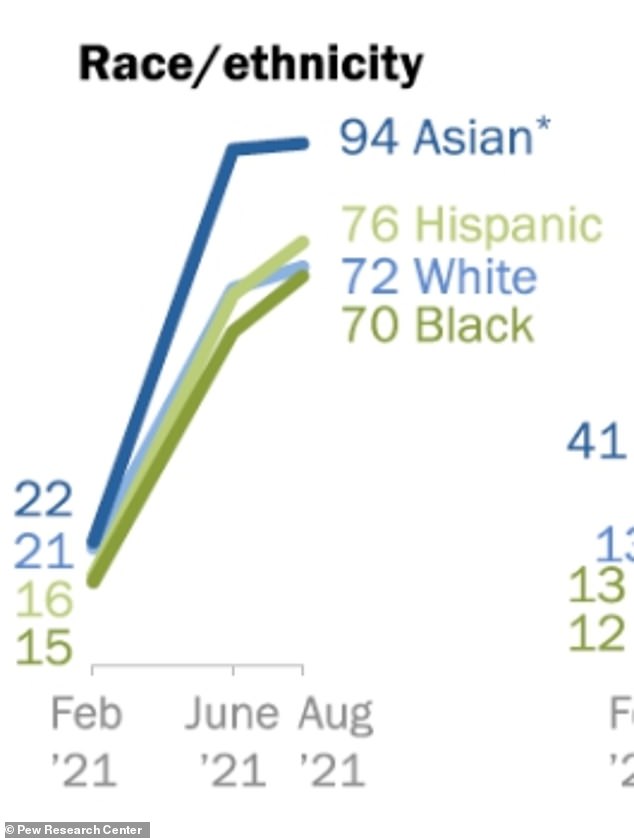 Earlier in the vaccination rollout, many public health experts expressed concern about an apparent gap in vaccination rates.

Black Americans appeared to be getting inoculated at a lower rate than white Americans.

Experts pointed to vaccine hesitancy in this population, as black Americans are more likely to distrust the U.S. medical system due to historical events like the Tuskegee syphilis study as well as present-day experiences.

White Americans also had greater access to vaccines early in 2021 because older adults were prioritized early in the rollout.

In addition, white Americans tend to be overrepresented in the healthcare professions – another group that was prioritized for vaccine access early in 2021.

As the vaccine rollout has continued, however, dynamics have shifted.

Later in the spring and summer, white Americans got vaccinated at lower rates while more black Americans sought their shots. 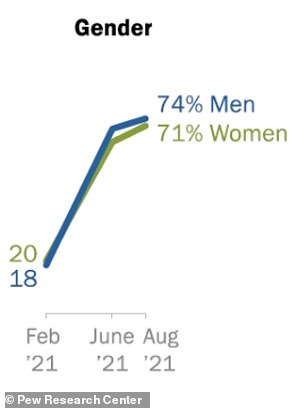 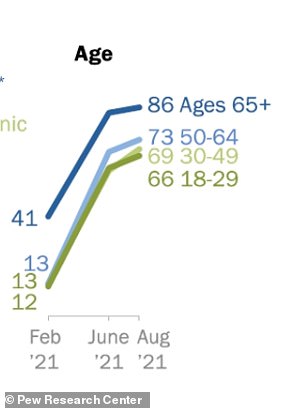 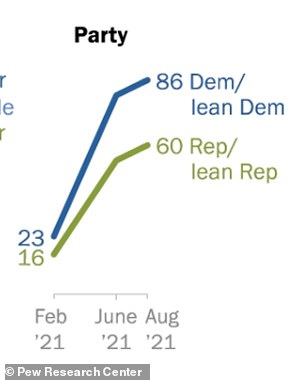 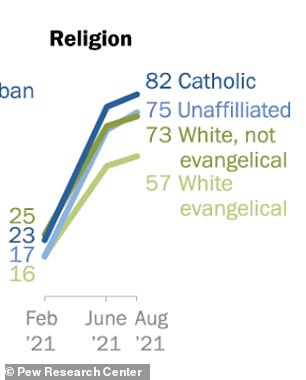 Republicans are much less likely to get vaccinated than Democrats (left). White evangelical Protestants are the least likely religious group to be vaccinated (right)

Pew researchers designed the survey to be representative of the US population by gender, race, ethnicity, partisan affiliation, and other demographic qualities.

That aligns with data from the Centers for Disease Control and Prevention (CDC), which say that 76 percent of adults have received at least one dose and 65 percent are fully vaccinated as of September 15.

That’s much lower than the rates reported earlier in 2021.

In July, a KFF analysis found that ‘less than half of black and Hispanic people have received at least one COVID-19 vaccine dose in nearly all states reporting data.’ 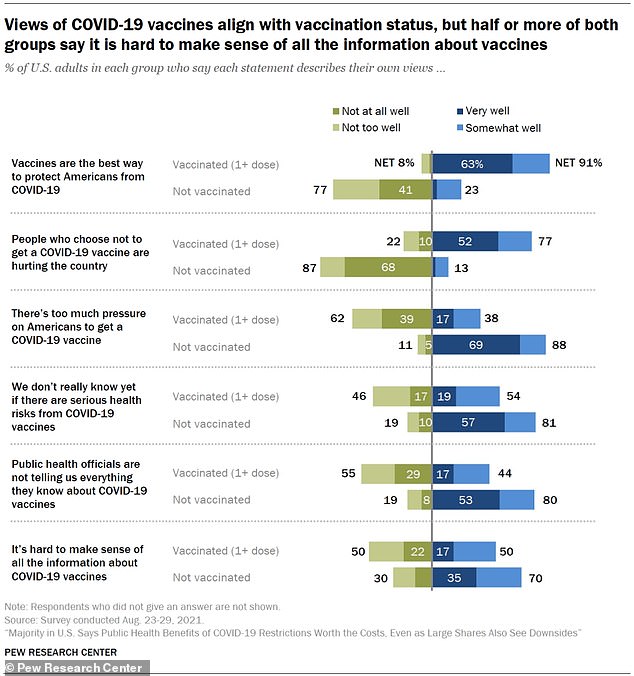 Many Americans – including those who have been vaccinated – expressed reservations about the vaccines, though the majority agreed that they’re important for protection

The Pew Research Center survey additionally found that White evangelical Protestants and those without health insurance are least likely to be vaccinated.

In both groups, just 57 percent of survey respondents reported receiving a vaccine dose.

Republicans are also much less likely to get vaccinated than Democrats, Pew found.

Overall, 60 percent of those surveyed said they agreed with the statement, ‘people who choose not to get a Covid vaccine are hurting the country.’

The majority of respondents also agreed with some degree of vaccine requirement for public venues. 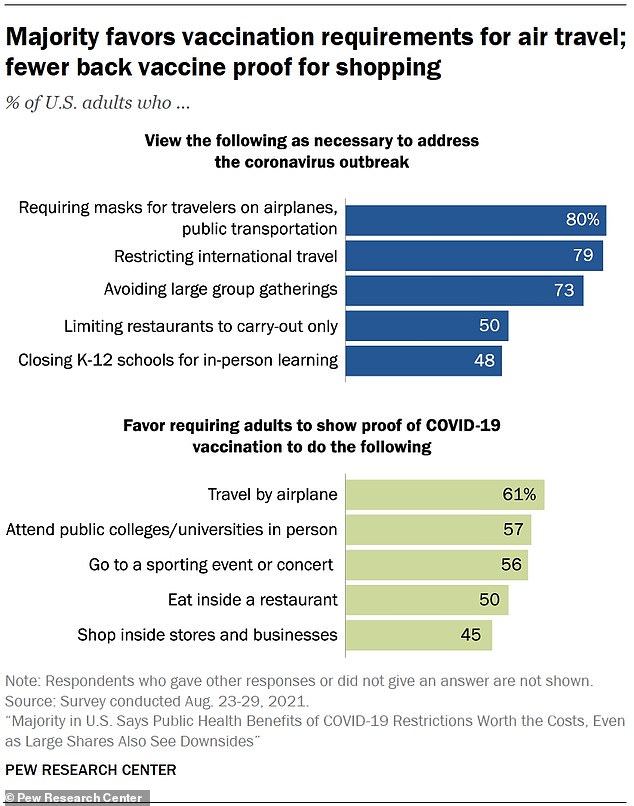 The majority of adults favor vaccine requirements for public settings such as air travel, university classes, and sporting events

Still, many of the survey respondents expressed concerns about the vaccines – including those who chose to get their shots.

Just over half of the respondents said they thought there was ‘too much pressure on Americans to get a Covid vaccine.’ Among unvaccinated respondents, 88 percent agreed with that statement.

A higher number – 61 percent – said that they believed we do not yet know about all possible health risks from the vaccines. 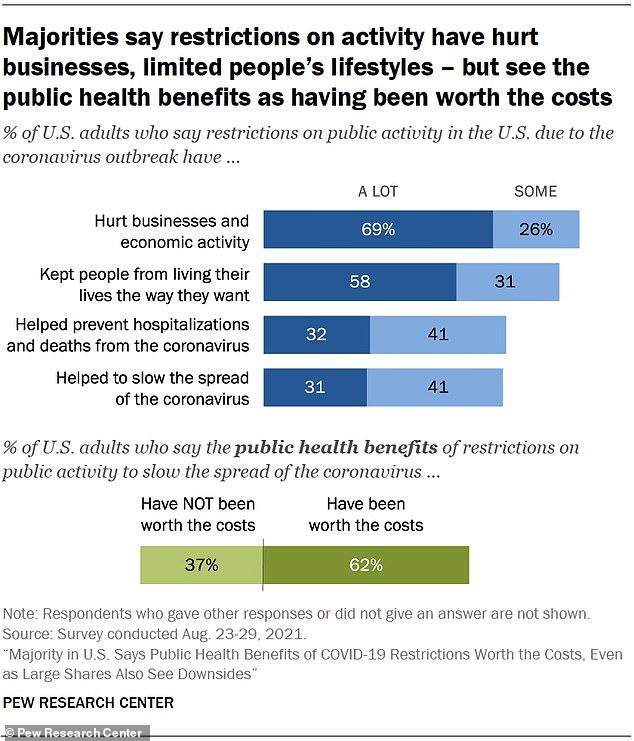 For example, significant majorities of Americans said that Covid restrictions have hurt businesses and economic activity – 69 percent – and kept people from living their lives the way they want to – 58 percent.

But a majority – 62 percent – also said that the public health benefits of these restrictions were worthwhile, since these benefits slowed coronavirus spread.

These survey results indicate that, despite increased polarization over vaccinations and other safety precautions, the majority of Americans still support basic measures to curb the virus’ spread.

The Pew report authors additionally noted that: ‘Despite widespread vaccination efforts, 54 percent of U.S. adults say the worst of the outbreak is still to come.’ 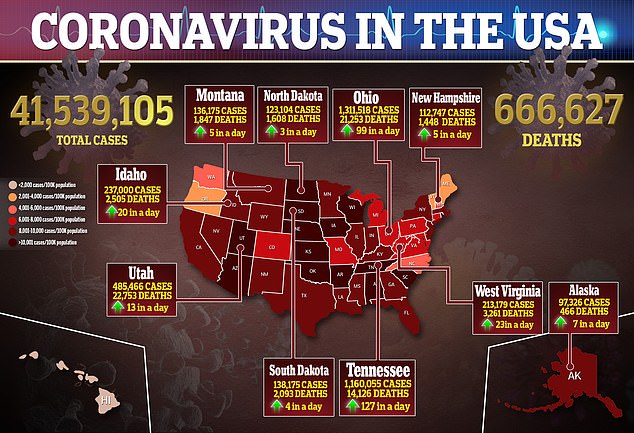