Scott Morrison has fronted a press conference from Washington to provide an update on the magnitude 5.8 earthquake that rocked Melbourne and regional Victoria on Wednesday.

No deaths have been recorded but tremors have been felt as far as NSW and Tasmania with a Melbourne burger restaurant bearing the brunt of the damage.

The epicentre of the quake was 10km deep near Mansfield in Victoria’s east at 9.15am on Wednesday morning, according to Geoscience Australia.

‘It can be a very, very disturbing event for an earthquake of this nature,’ the Prime Minister said in a press conference on Wednesday morning AEST.

‘They are very rare events in Australia and as a result, I am sure people would have been quite distressed and disturbed by that particularly in the most immediate areas affected.’

Scott Morrison has held a press conference from Washington to provide an update on the 5.8 earthquake that rocked Melbourne and regional Victoria on Wednesday

Mr Morrison said he’d been in contact with Victorian Premier Daniel Andrews and Deputy Prime Minister Barnaby Joyce, saying it was ‘good news’ there have been no reports of serious injuries.

‘But, of course, these are early reports and I remain concerned and I’ve asked the Deputy Prime Minister to keep me informed of developments,’ he said.

Emergency Management Australia will be liaising with state authorities to provide care to anyone in need in the wake of the earthquake.

The earthquake is the biggest Victoria has experienced since European settlement  in 1834. 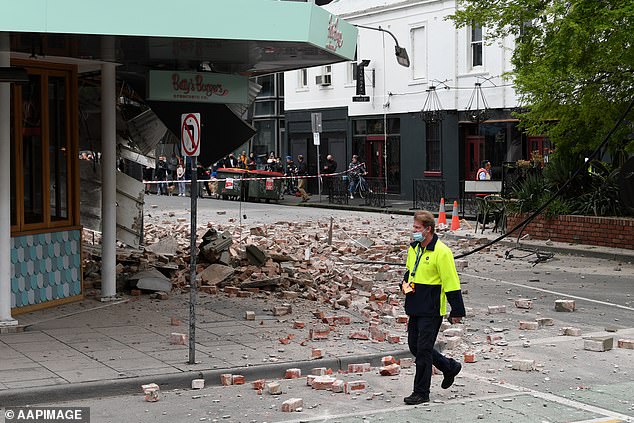 A Betty’s Burgers restaurant on Chapel St was left partially collapsed from the quake which was followed by a 4.0 magnitude aftershock 18 minutes later.

Office and apartment blocks across Melbourne were evacuated but there are so far no reports of any injuries.

Mr Morrison also finally addressed the violent protests carried out in Melbourne this week by disgruntled construction workers, after days of silence on the matter.

‘My message is very straightforward and that is none of us are above the law,’ he said.

‘The events in Melbourne of the protests are very concerning and that is unacceptable behaviour and particularly at a time when those in Victoria are dealing with lock downs and many other stresses.

‘We will get through this but protest activity and what we have seen there is highly distressing and that is not an appropriate response to try to deal with an outbreak of this nature.’

His comments follow two days of wild demonstrations carried out by workers protesting against vaccine mandates for tradies.

Protests took an ugly turn in Melbourne on Monday, prompting Premier Andrews to shut down the construction industry for two weeks. 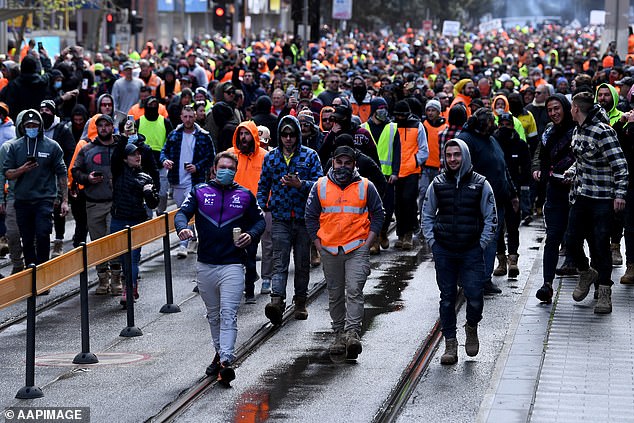