A bizarre-looking dinosaur with tiny arms and a squashy face like a bulldog has been unearthed in Egypt, scientists reveal.

Bone of the dinosaur species, which is yet to be formally named, was found by experts at the Bahariya Oasis of Egypt’s Western Desert.

The researchers say the creature was bipedal, meaning it walked on two legs, and had small teeth and very stumpy arms.

The meat-eating beast, roughly 20 feet (six metres) in length when it lived, roamed the Sahara Desert 98 million years ago.

The meat-eating species had small teeth, tiny arms and a squashed face like a bulldog (artist’s impression) 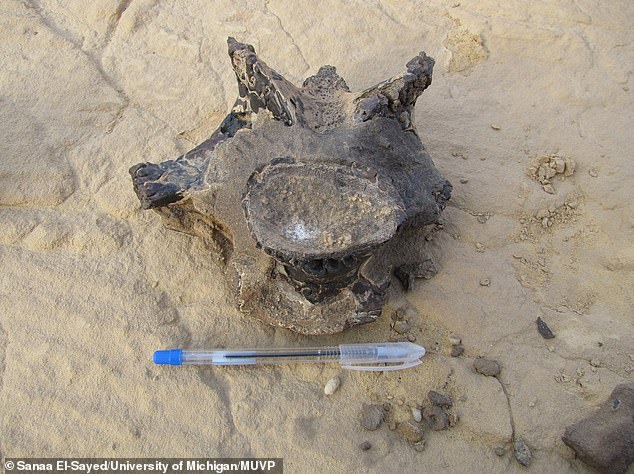 The abelisaurid neck vertebra bone, approximately 98 million years old, as it was found in the field in the Bahariya Oasis

The species belongs to the lizard-like abelisaurid dinosaur family, which thrived during the Cretaceous period (145 to 66 million years ago), the final time period of the age of dinosaurs. abelisaurid

Abelisauridae were a striking family of theropod dinosaurs averaging 16 to 30 feet long that prowled mainly in Patagonia and other areas of the ancient southern supercontinent Gondwana.

When Tyrannosaurus and its relatives roamed North America and Asia, the abelisaurids occupied a similar niche in Patagonia and other areas of South America.

Abelisaurids had huge jaws. Just like T-Rex, they relied on them to crush and kill prey.

But abelisaurids had even tinier arms than the tyrannosaurs.

Abelisaurid fossils had previously been found in Europe and in many of today’s Southern Hemisphere continents, but never before from the Bahariya Formation.

The new study was led by Belal Salem at the Mansoura University Vertebrate Paleontology Center (MUVP) in Mansoura, Egypt, who is also a graduate student at Ohio University and a faculty member at Benha University.

‘During the mid-Cretaceous, the Bahariya Oasis would’ve been one of the most terrifying places on the planet,’ said Salem.

‘How all these huge predators managed to coexist remains a mystery, though it’s probably related to their having eaten different things, their having adapted to hunt different prey.’

The discovery is based solely on a well-preserved vertebra from the base of the neck, found during a 2016 expedition to the Bahariya Oasis funded by the National Geographic Society.

It is the oldest known fossil of abelisauridae from northeastern Africa, and shows that, during the mid-Cretaceous, these carnivorous dinosaurs ranged across much of the northern part of the continent, east to west from present day Egypt to Morocco, to as far south as Niger and potentially beyond.

Abelisaurids were theropods – a clade of dinosaurs characterised by hollow bones and three-toed limbs that walked on two legs.

Researchers could tell the vertebra was from an abelisaurid because it is virtually identical to the same bone in other, better-known abelisaurids such as carnotaurus and viavenator from Argentina and majungasaurus from Madagascar.

Additionally, Salem and colleagues conducted a computer-based evolutionary study, known as a cladistic analysis, that confirmed the placement of the species represented by the new vertebra within the family. 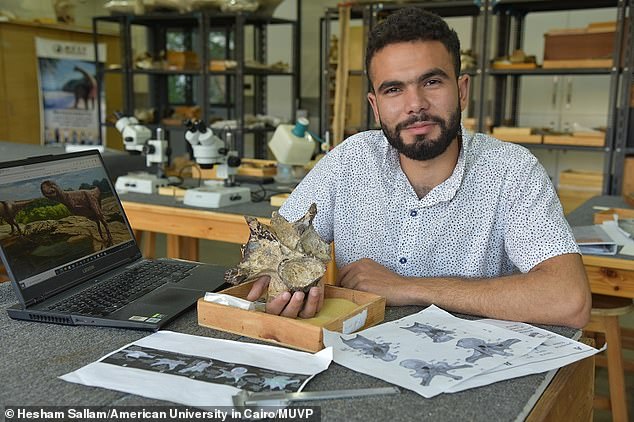 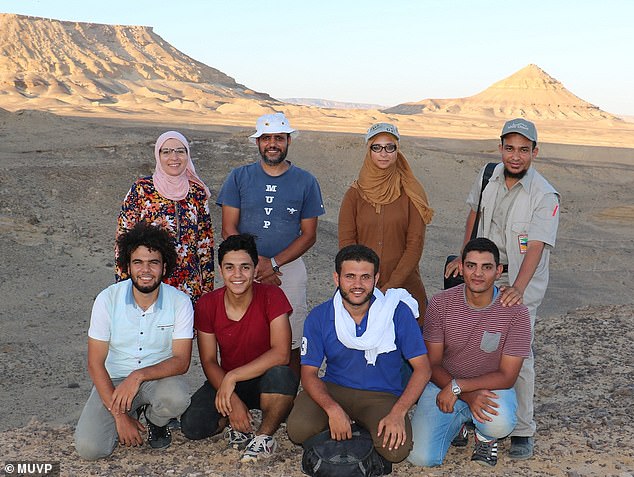 Researchers are pictured at the Bahariya Oasis, a naturally rich oasis in the Western Desert of Egypt

‘My first glimpse of this specimen from field photos left no doubt about its identity. Abelisaurid neck bones are just so distinctive.’

In the early 20th century, the formation yielded the original specimens of a host of dinosaurs including the colossal sail-backed fish-eater spinosaurus.

Unfortunately, all Bahariya dinosaur fossils collected prior to World War II were destroyed during an Allied bombing of Munich in 1944.

Reconstruction of the Bahariya Oasis in the Sahara Desert of Egypt approximately 98 million years ago, showing the diversity of large theropods. The newly discovered, as-yet unnamed abelisaurid (right) confronts spinosaurus (left center, with lungfish in jaws) and Carcharodontosaurus (right center), while two individuals of the crocodilian Stomatosuchus (left) look on. In the background left, a herd of long-necked Paralititan 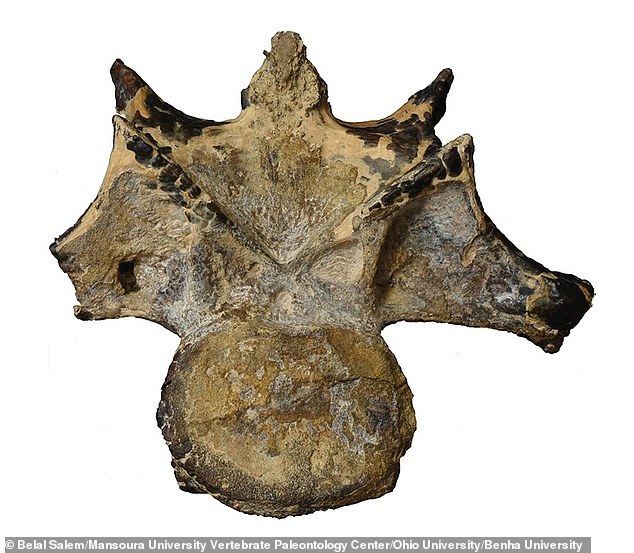 The abelisaurid neck vertebra from the Bahariya Oasis, Egypt that constitutes the first record of this dinosaur group from that classic fossil locality. The bone is shown in anterior view

‘The Bahariya Oasis has taken on near-legendary status among paleontologists for having produced the first-known fossils of some of the world’s most amazing dinosaurs,’ said co-author Matt Lamanna at the Carnegie Museum of Natural History.

‘But for more than three quarters of a century, those fossils have existed only as pictures in old books.’

Abelisaurids were among the most diverse and geographically widespread large predatory dinosaurs in the southern landmasses during the Cretaceous period.

Along with spinosaurus and two other giant theropods (carcharodontosaurus and bahariasaurus), the new species adds another find to the group of large predatory dinosaurs that roamed what is now the Egyptian Sahara roughly 98 million years ago.

The new vertebra holds implications for the biodiversity of Cretaceous dinosaurs in Egypt and the entire northern region of Africa, researchers say.

The research team describes the discovery in a paper published today in Royal Society Open Science.