A ruthless gang of thugs have been jailed for a total of 61 years for a series of ram-raid cashpoint robberies caught on shocking CCTV.

A court heard banks, supermarkets, convenience stores and a college were targeted by the thieves during their rampage across Birmingham and Solihull, West Midlands.

Included in the evidence was a video showing the gang at Barnett’s house trying to work out how to use a power tool known to have been used in one of their crimes. 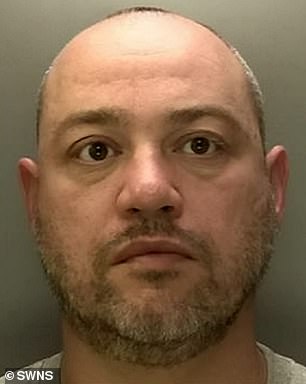 Four men including, Larry Barnett, 33, (left) and Jamie Lambie, 43, (right), have been jailed for their part in a series of ram-raid cashpoint robberies across the West Midlands

After stealing cars, the gang would smash their way into buildings before tying straps around freestanding ATMs to rip them free.

They also rammed a police car causing minor injuries to two officers and attacked a security guard where a cash box containing tens of thousands of pounds was stolen.

The videos, some of which were filmed by members of the public who witnessed the crimes, show the gang causing thousands of pounds of damage. 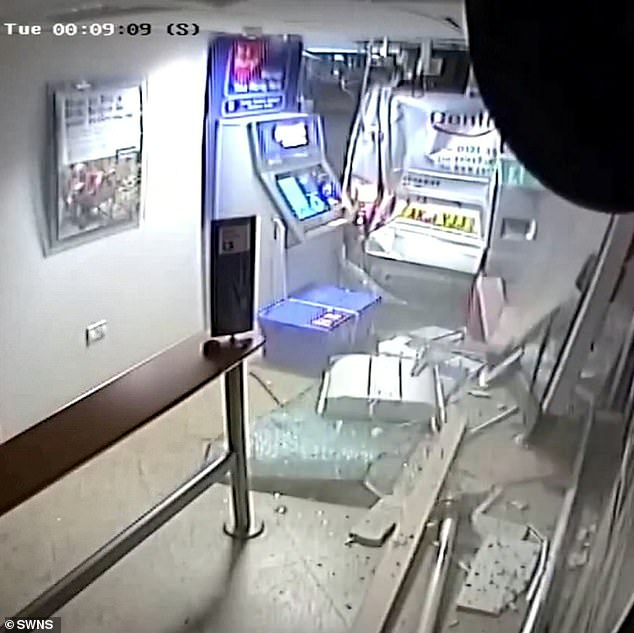 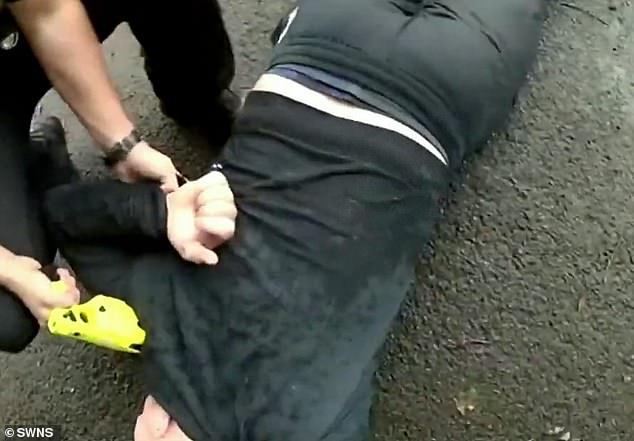 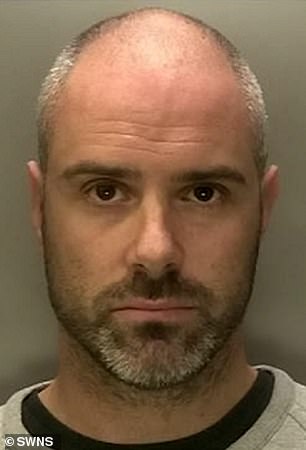 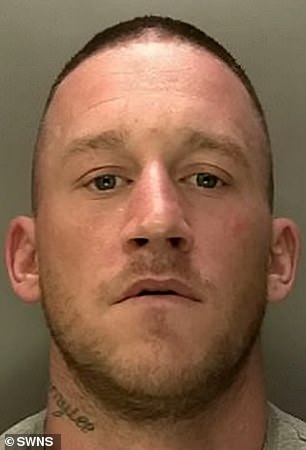 During their spree, the gang were responsible for 14 offences and escaped with £200,000 and around £40,000 worth of cigarettes (pictured left is Michael Dunleavy who was jailed for nine years and right Lee Barnett who has been sentenced to 12 years in prison)

Other shocking clips reveals how the gang rammed into a police car and were caught using tools which could be matched to those found at one of their homes.

The gang were responsible for 14 offences during the three months, predominately targeting ATMs, but also stole around £40,000 worth of cigarettes.

Where did the gang hit during their wild three-month crime spree?

Monday 18 March – The gang ram through glass windows at Solihull College and drag a cash machine containing £2,000 causing over £20,000 worth of damage.

Tuesday 19 March – They reverse a stolen van near the entrance to a Co-op in Acocks Green and make several attempts to steal a cash machine.

Thursday 25 April – Using a stolen skip lorry, the gang attempt to ram a Tesco Express in Balsall Common. They are unsuccessful and abandon the skip which had blocked access to the shop.

Tuesday 30 April – Using sledge hammers and an angle grinder, the gang spend over 10 minutes trying to remove a cash machine from the wall at a Morrisons in Rednall.

Friday 3 May – They attack a security guard with hammers and a crowbar and steal a cash box containing £20,000. They then attempted to launder the money though bookmakers in Shard End and Coventry. The money was dyed with Smartwater which assisted us in identifying where it came from.

Tuesday 21 May – They target a Nationwide bank in Shirley, they are seen by police shortly after and ram a police car head on causing minor injuries to two officers

In total 13 vehicles were stolen during their crime spree, which started in March last year, and were used to carry out the spate of robberies.

Yesterday four members of the gang were caged at Birmingham Crown Court after being found guilty of a string of offences.

Seven other men were also convicted of being part of the gang and will be sentenced for their involvement next month.

The court was told how the prolific crooks first targeted Solihull College and escaped with £2,000 in cash and caused £20,000 worth of damage.

They also struck at a Co-op, a Tesco Express, Morrisons, often in broad daylight as shocked shoppers looked in in horror.

On May 3 they attacked a security guard with hammers and a crowbar to steal a cash box containing £20,000.

They then attempted to launder the money though bookmakers in Shard End, Birmingham, and Coventry.

The gang also targeted a Nationwide bank in Shirley, West Midlands, during which they rammed a police car head on causing minor injuries to two officers.

Detectives were able to identify the culprits after strapping was recovered from one of the scenes was traced to a local supplier.

Similar strapping was sold only two days previously and a trawl of the CCTV led officers to one of the main gang members, Larry Barnett. 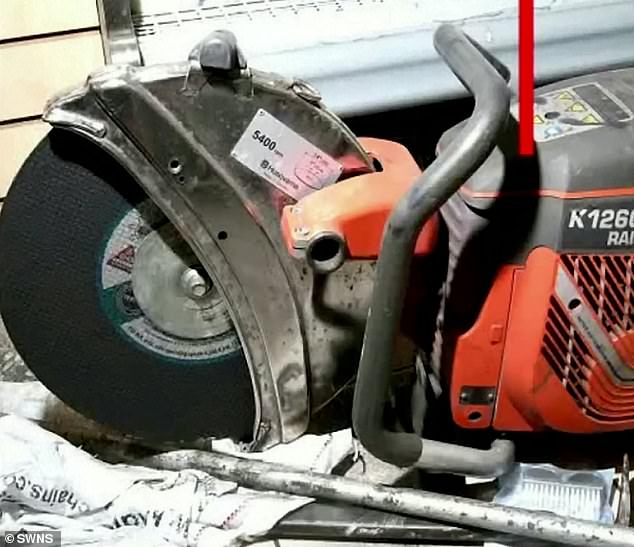 Included in evidence from the police was a video showing the gang at Barnett’s house trying to work out how to use a power tool known to have been used in one of their crimes. Officers later found a disc cutter (pictured) at the scene of a robbery 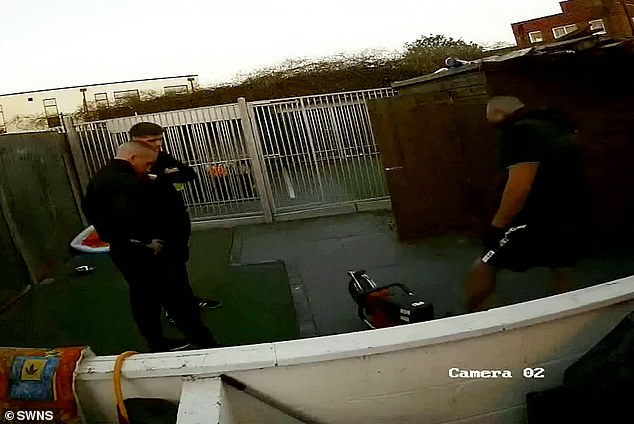 After a painstaking operation including months of surveillance work, CCTV, forensics and phone analysis, police were able to bring the gang down.

Detective Sergeant Martin Kelly, of West Midlands Police, said after the case: ‘The actions of this gang were shocking.

‘Their behaviour was blatant, often spending long periods of time trying to steal cash machines with no care for the people around them.

‘They had no regard for the law and were determined to do what they wanted with no thought about the consequences. 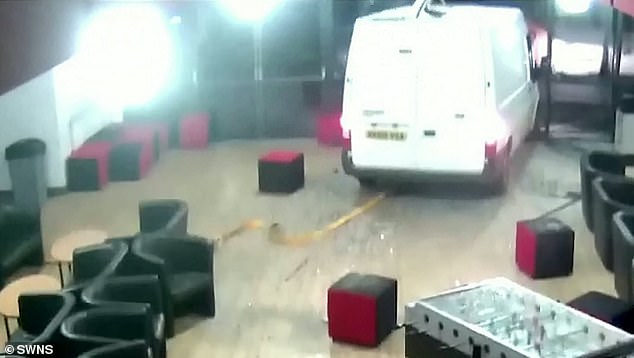 In total 13 vehicles were stolen during their crime spree, which started in March last year, and were used to carry out the spate of robberies (pictured is footage from Solihull college where the crooks escaped with £2,000 in cash and caused £20,000 worth of damage) 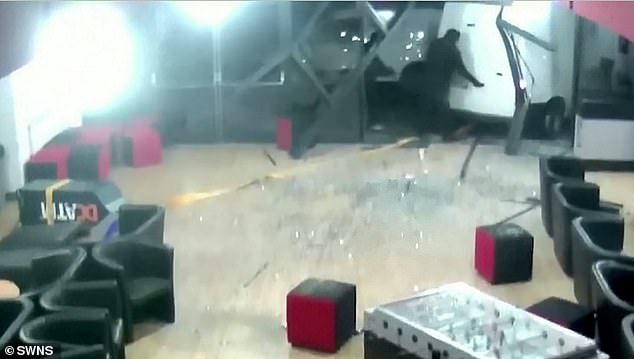 ‘They also used unnecessary levels of violence towards various security guards and staff members and also rammed a police car head on in an effort to evade us.

‘Their crime spree also left a trail of destruction, with damage thought to be in the region of £200,000.

‘Thanks to great police work, we were able to build up a detailed picture of the gang, their vehicles and movements. 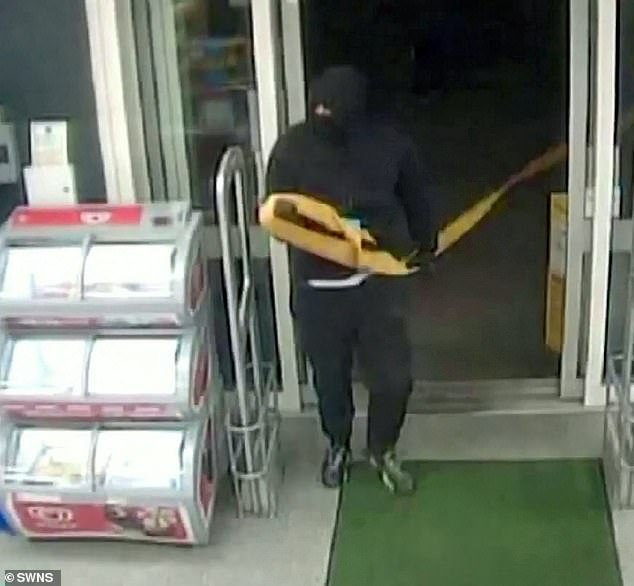 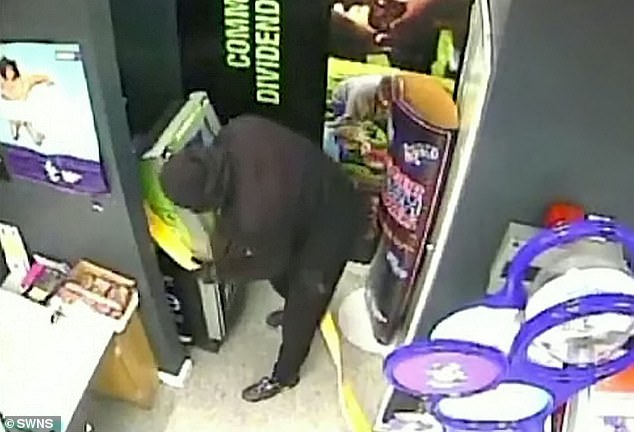 ‘We even seized CCTV from Larry Barnett’s own house showing him and others trying to work out how to use a power tool that we know was used in one of their crimes.

‘We continue to work with the cash machine industry to help increase security awareness to reduce the risk of them being targeting by criminals in this way in the future.

‘I hope their lengthy prison time will be of some comfort to those people affected by their wild three-month crime spree.

‘These dangerous offenders are now off the streets and being punished for their actions.’

Those jailed on Thursday were:

Larry Barnett, 33, from Stechford was given 21 years.

Michael Dunleavy, 37, from Balsall Common was given 9 years.

While those still to be sentenced are:

Michael Bowen, 31, of no fixed address 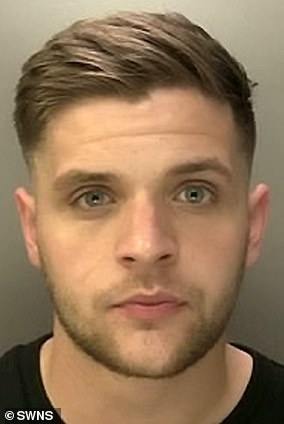 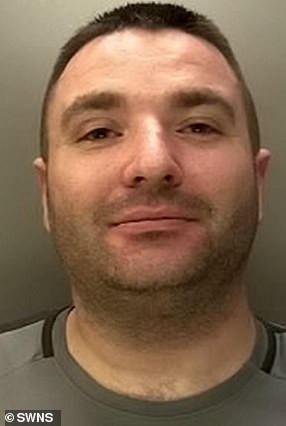 Shaun Bates, 26, from Shirley (left) and Michael Bowen, 31, of no fixed address (right) are still waiting to be sentenced for their part in the gang’s crimes 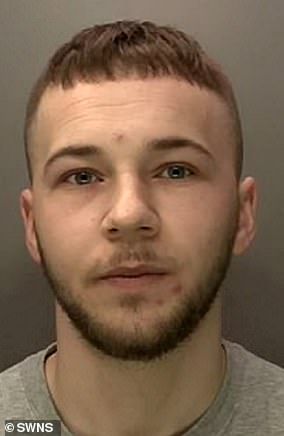 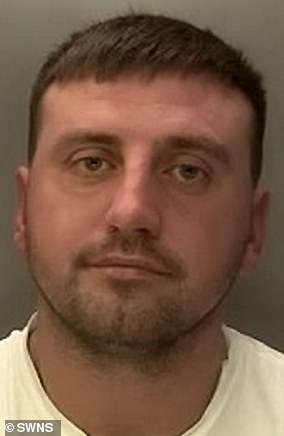 Shawn Bancroft, 27, from Castle Bromwich (left) and Oliver Higgins, 33, from Hollywood (right) are the final two members of the gang who are yet to be sentenced